When we woke up on the morning of day 7, we were very anxious to hear the morning announcement and whether it would include plans to go below the Antarctic Circle as planned. As our Expedition Leader, Rinie, told us the weather and winds were favorable and spoke the words, “please join us on the bow as we cross the Antarctic Circle,” everyone cheered from their cabins and clapped with excitement.

Breakfast was postponed as everyone layered up and rushed to the bow for our 8:15am crossing of the Antarctic Circle! The gorgeous orange sun was just peeking out from behind a few clouds on the horizon. Our fantastic expedition staff was all smiles as they went around the bow pouring everyone glasses of champagne! We were all busy snapping photos and smiling and the bow was all abuzz! 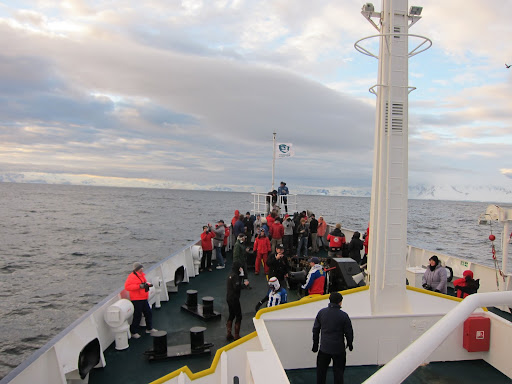 Finally, at the sound of the ship’s horn, we crossed the Antarctic Circle! It was an incredible moment that we will never forget. Very few people are lucky enough to travel this far south in Antarctic waters. Most Antarctic cruises don’t go as far as crossing the Circle, as it adds an extra day to the cruise. The importance of it all really sank in. Many hugs were exchanged as we realized how lucky we were to be there below the Polar Circle. Passengers took turns ringing the ship’s bell and posing for photos to commemorate this special day. 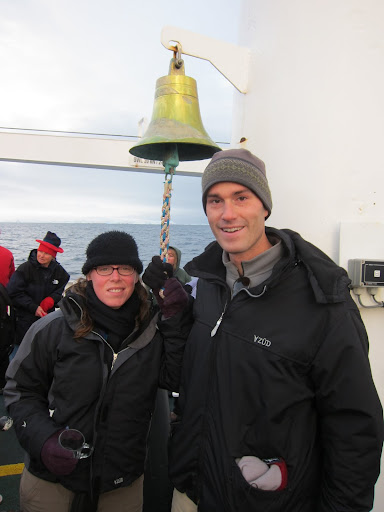 After the Circle celebration, it was time to head inside for breakfast. In the morning announcement, Rinie announced that the plan was to make a short landing on Detaille Island, our one chance to set foot on land below the Circle. But, he also warned that weather conditions around the island were unknown and that we wouldn’t be sure we could make the landing until the staff checked conditions of the landing site. As we ate our breakfast, we saw the staff head out on a zodiac to survey the landing area. A few minutes later, Rinie announced that we would indeed be landing! It would be a short time on land for us, but we would be lucky enough to set foot on land below the Circle! 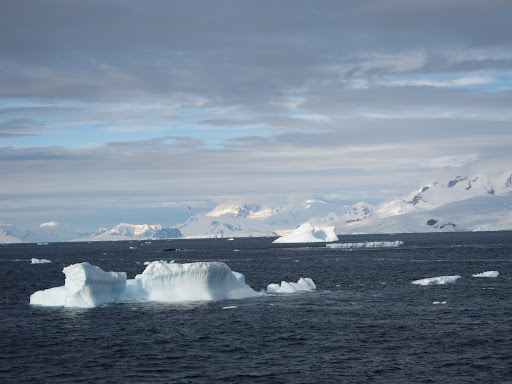 We layered up and headed out to the zodiacs. Winds were a bit high, but thanks to a huge iceberg situated just offshore, our landing site was blocked by the winds. Our luck had continued! 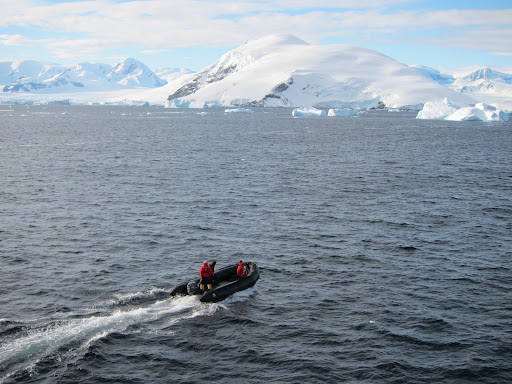 Once we set upon tiny Detaille Island, we were blessed with spectacular blue skies and views of the surrounding mountains which made a great backdrop to many a photo. We checked out another field hut. This former British station remained as it was since researchers abandoned the hut in 1959. 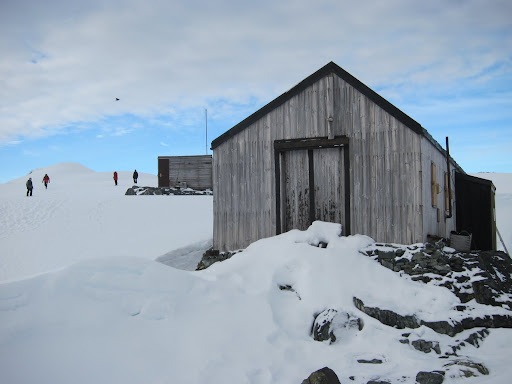 Apparently, when a supply ship was coming in to drop off supplies on its yearly schedule, extreme ice conditions led the men stationed there to pack up quickly and abandon the station. The station was basically permanently abandoned after that and the interior remains just as they left it. A set of long underwear and socks sits strung on a line in front of the stove. Cupboards were full of pickles and anchovies dated 1958. Unreal. 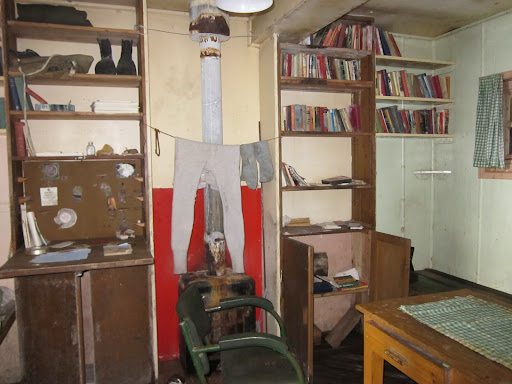 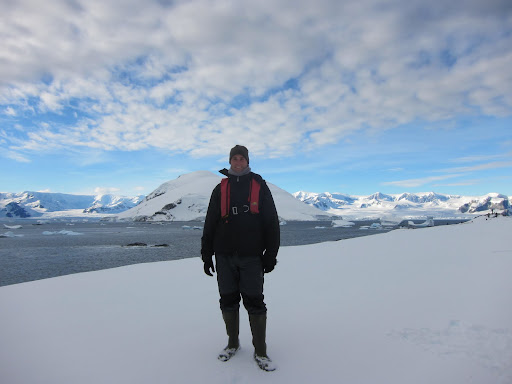 We enjoyed our time on land below the circle and headed back to the ship for lunch. We jumped in the zodiac with Jim, a fun and friendly British member of the staff who usually provides a great zodiac tour and likes to get us close to the action. On our short trip back to the boat, we spotted two Humpback whales. We got a pretty close look at these two beautiful creatures and wished we had had more time. Jim took us close and tried to get us a better look, but the day’s schedule was tight and we had to get back to the ship. He told us to go out on deck once we were back on the ship, that they might stick around and play for a while. And that they did. 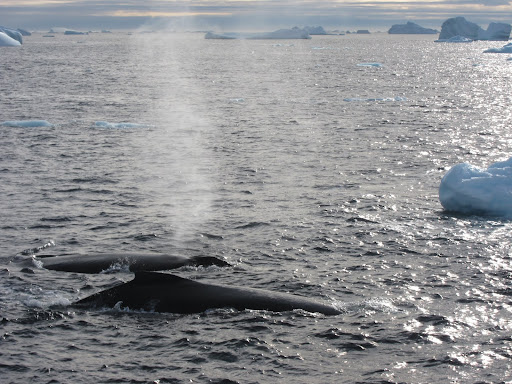 What happened next was probably one of the most incredible things I have ever experienced on this planet. This humpback mother and her curious calf spent the next 45 minutes saying hello to us. They crossed under our ship and surfaced many times to get a good look at us. They seemed to work as a team and put on an incredible “show.” This is the type of thing people only dream of seeing. And there we were. In Antarctica. Miles away from home. With a front seat to a spectacular display of whale to human interaction. Since we were so far south in Antarctic waters, these animals rarely see ships and humans. As our luck continued, their curiosity led them to checking us out by surfacing, waving their fins, blowing out of their blowholes (we could even smell their stinky breath!) and even spyhopping multiple times. Spyhopping is when a whale propels their head out of the water by keeping their body completely vertical so they can see what’s going on above water. And that’s just what they did. It was just magnificent. 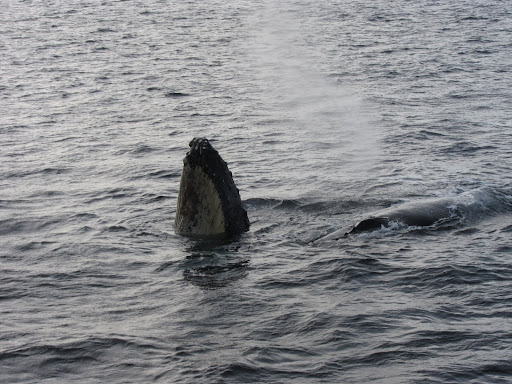 To see these huge animals in nature, in the wild, choosing on their own to come check us out, see who we were and say hello. This entire interaction took my breath away multiple times. Just when we thought they couldn’t, they wouldn’t come any closer, they would. Everyone was running around the ship screaming and cheering – trying to get a closer look as our humpback friends came up closer to play. The photos don’t even suffice. They will never be able to capture the magic and beauty of that experience that lead us to tears. One of the best days of my life. 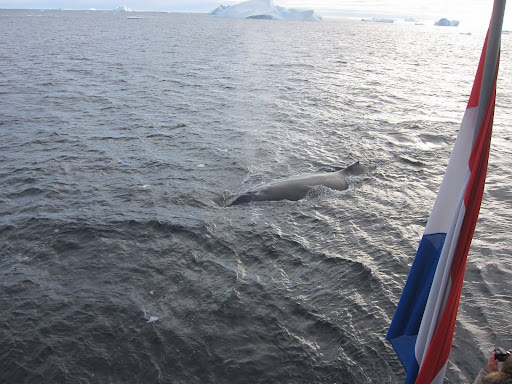 After lunch, we were at sea for the afternoon making our way back up toward the Drake Passage. After walking around the ship and taking in some more of the beautiful scenery and crisp weather (it was much colder since we were farther south), we headed into our cabin to chill out. Our fantastic staff remarked to us several times about just how lucky we were to have seen all of the animals we had and the amazing interactions we had with them. Brent, a really nice guy and a super knowledgeable expert on Antarctic wildlife said that the only thing left to see was orcas. Killer whales. I had read and Brent confirmed that since we were so far south, our chances were better at seeing them. After being disappointed with missing out on seeing them beach themselves to feed on sea lions in Puerto Madryn, this was our chance!

As I looked out the window of our cabin, I kid you not, I said out loud a mantra – “orcas, orcas, orcas.” Just a few seconds later, I saw something strange out in the water. My breath fogged up the window as I called to Erik – “what’s that?” There were several dorsal fins of some type and there were many somethings swimming together. Erik thought they were dolphins, but I knew they had to be orcas. I grabbed my coat and ran out the door to the bow. On my way up the stairs, I saw a staff member running to make the ship announcement – orcas on the starboard side! People began piling outside in awe. Our captain steered the ship off course and circled around to give us a better look. Cameras were snapping photos of yet another incredible encounter. A pod of about 15-20 orca whales (really dolphins) were gracefully swimming around a picturesque iceberg. 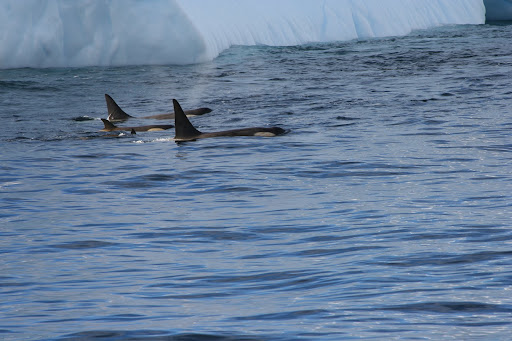 It really doesn’t get much better than that. Seeing 20 orcas in the wild. Another absolutely breathtaking day in Antarctic paradise…