After visiting Ecuador’s capital, Quito, we headed to the small town of Baños situated between gorgeous lush mountains and cascading waterfalls. Baños gets its name from the many hydrothermal hotsprings in the area. We found a cute, clean hostel called Plantos y Blancos in a great location for just $19 a night for a private room with bath. The rooftop cafe and terrace provided spectacular views of the surrounding mountains and the famous waterfall in town, Manto de la Virgen. Here in this picturesque setting, for just a couple dollars extra, we had a delicious full breakfast with fresh juice and coffee. Yum.

The food in Baños is pretty good – we had some great meals in town at the popular gringo hangout Cafe Hood and a Swiss place called Swiss Bistro. Good food, but definitely overpriced. Having become quite the touristy town, Baños has built up quite a bit of nightlife along Alfaro Street for all of the 20-something adventure junkies who’ve come to town. We enjoyed walking along this thumping street and had fun dancing to some cool tunes at one bar. 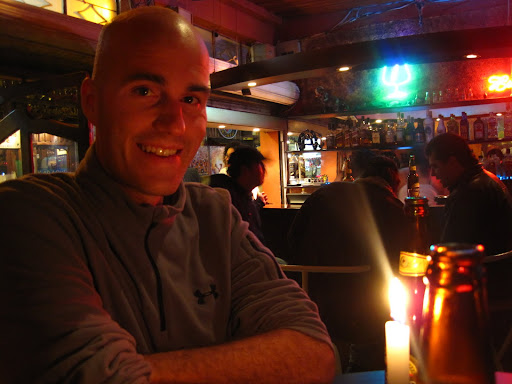 As we were prepping ourselves for our upcoming trip to the legendary Galapagos Islands, we were so sad that after changing batteries, rebooting and doing everything we could, our underwater video camera was in fact dead. So disappointing.

Baños has a route of waterfalls – there are over 10 in the area. We booked a tour with a double-decker bus to explore these beautiful waterfalls. After a delicious breakfast at Rico Pan, Erik and I took our regular seats of choice – two front seats on the top deck for a great view. 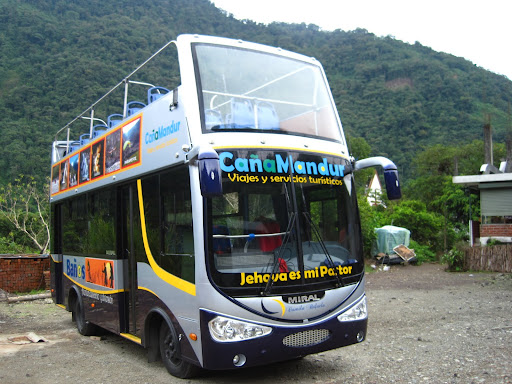 As we started driving, we realized this was not only a sightseeing tour, but also a thrill ride. We rode over the tiniest one lane bridges high above rivers and everyone screamed – it was so scary that I decided it would be a good idea to strap myself in the seat belt just in case. Some of the roads we drove on were right along steep cliffs that drop off into a valley below. Quite the adrenaline rush for those of us seated on the outer seats. Yikes!

But, the day was amazing. The first stop was overlooking a rushing river between tall rock mountains. Erik tried to convince me to join him but wound up going alone on a small openair cable car ride (called a tarabita) across the span. I was happy taking photos and videos from safe solid ground. 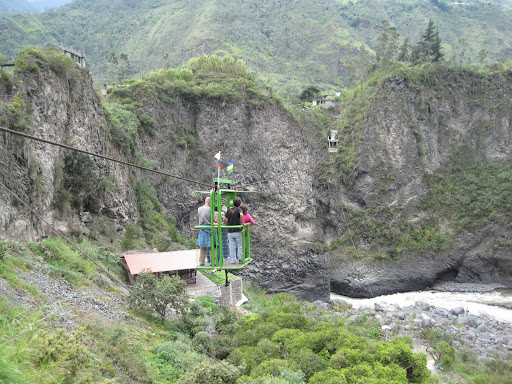 You can also watch Erik’s video to see what it was like from inside the tarabita:

The next stop was to two parallel bridges over another river. These bridges have become the perfect place for some low-cost, low-safety bridge jumping. We stood in horror and screamed as people put on harnesses and jumped off the bridges, some even head over heels. A few guys looked terrified as they took the plunge, including one guy from our group. 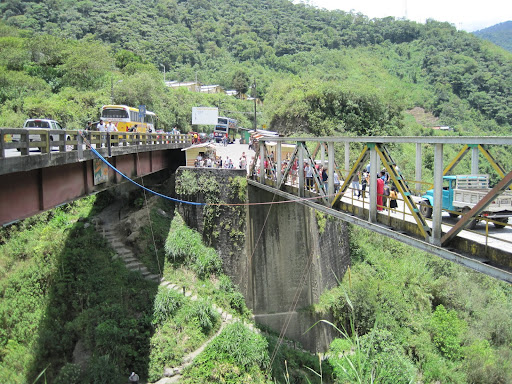 We got to see a lot of waterfalls, including Manto de La Novia, which had been one waterfall, but in February, a huge storm caused a landslide which created a second waterfall, as well as wiping out a hotel that once stood below. 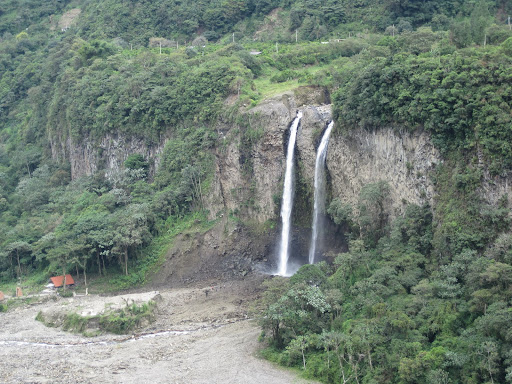 A trip to Baños would not be complete without a trip to a “baño” – one of the many hotsprings in the area. We decided to head to the Baños de la Virgen, which sit right next to the waterfall of the same name. 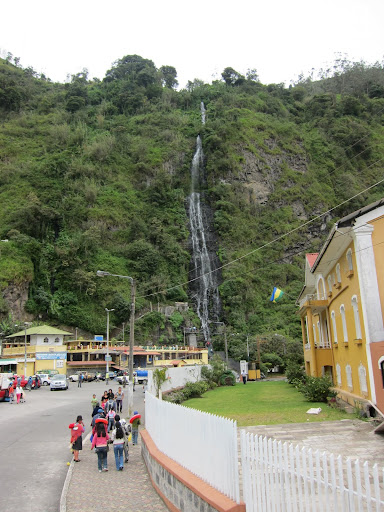 Our mistake was going on a Saturday night. When we got there a half hour before they opened the doors for the night session, there was already a queue about 50 people long! As a bonus, they made an announcement that they were refilling one of the large pools, so only two small pools would be open for the throngs of people waiting outside. Erik wanted to bail, but since it was really our only chance, I convinced him to check it out. For $4 entry each (night rate), we ran in, stripped off our clothes (thank goodness we already had our bathing suits on), took our obligatory shower and dipped our feet in the first pool. It was boiling hot! So, we headed for the pool upstairs which had less people and was a bit cooler than scalding. After a few minutes, the pool filled up and people were practically sitting on top of us. It felt more packed than a NYC subway car during rush hour. This kind of killed the relaxation factor for us, so we left.

All in all, we really enjoyed the gorgeous setting, the crisp weather and, of course, the waterfalls.