After Erik took a big leap off of the Kawarau Bridge in Queenstown, we were off to see the glaciers on the South Island’s west coast. We rode through the quaint town of Arrowtown and decided to take the highest paved road in New Zealand, the Crown Range Road. The turns were crazy and the roads were definitely scary and steep. But our trusty Jucy Jazz got us through it all. After that, we stopped at the stunning Lake Wanaka and soaked in the crisp blue hues of the lake. While there, we had a quick Skype session with my parents from my Ipod Touch in the car. They wanted to see Erik in the flesh and make sure he had survived the big bungy jump!

The town of Wanaka was far too touristy and pricy, so we carried on. On the advice of a friend of ours, we went to Puzzleworld – big mistake. It was just a bunch of optical illusion rooms, a crazy house with uneven floors and weird perception tricks. The big draw is the huge maze where you need to visit all four corners in four different colors. It was rather tough and took us about 30 minutes to complete successfully. We were glad we had a bit of a discount for this one, and unless you are a huge puzzle fan, I’d say you can give this one a miss. 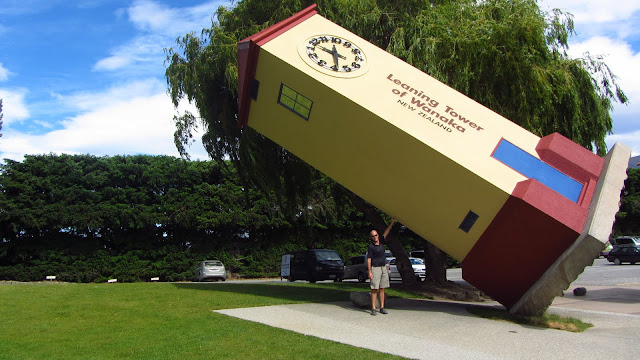 We stocked up on gas and groceries and then continued our scenic drive past the gorgeous lakes and waterfalls and over the Haast Pass. 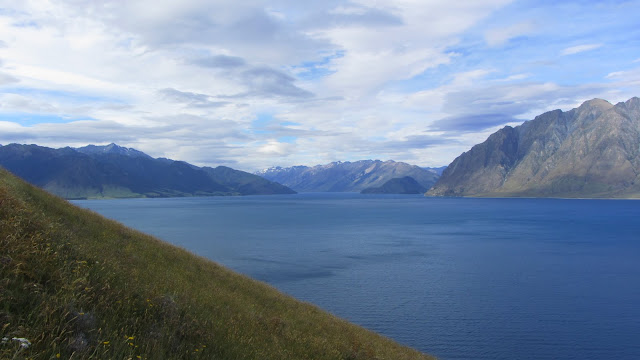 We stopped at Fantail and Thunder Falls and were very glad we had taken the time to see them. Both were very pretty. 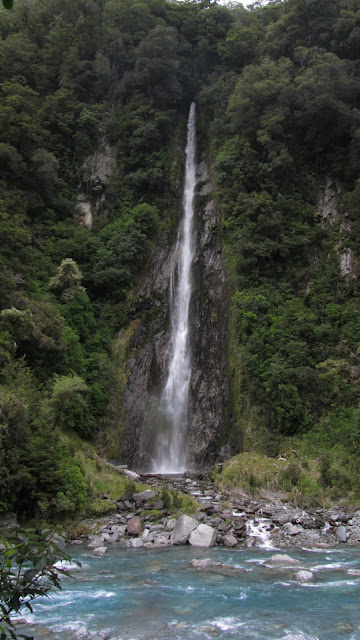 The next morning, we awoke to very grey, foggy skies. We drove along the longest one-lane bridge (737m or nearly half a mile) in New Zealand. 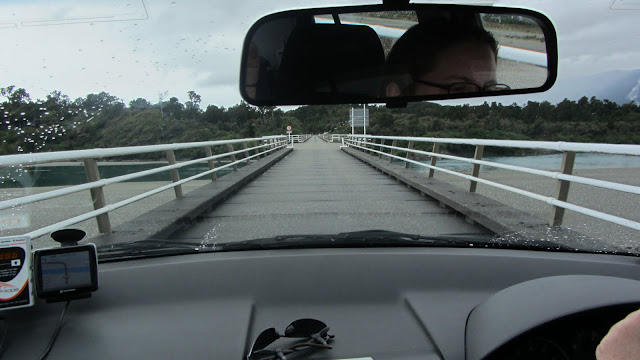 Despite the fog and rain, we stopped at a very long beach where we saw hundreds of white rocks stacked up along the road and along the beach. They all had writing on them denoting people’s names who had visited that spot and where they were from. Here’s our rock: 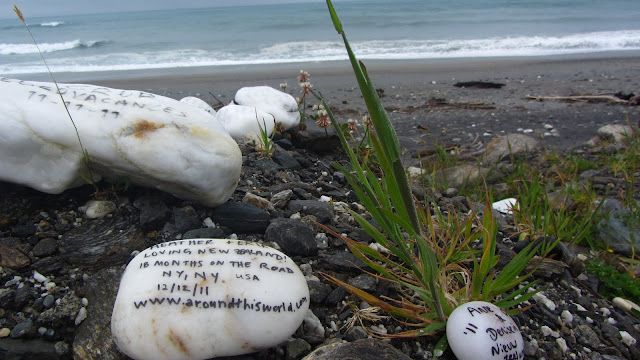 It was here that we ran into the two girls that we had met in the common kitchen at the Queenstown Holiday Park. Small world. They had gotten soaked in the rain on their motorcycle and seemed really exhausted. 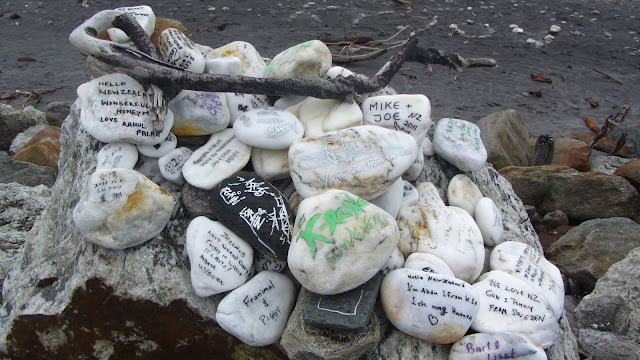 About an hour later, we made our way to the Fox Glacier, passing a number of signs charting the glacier’s retreat over recent years. 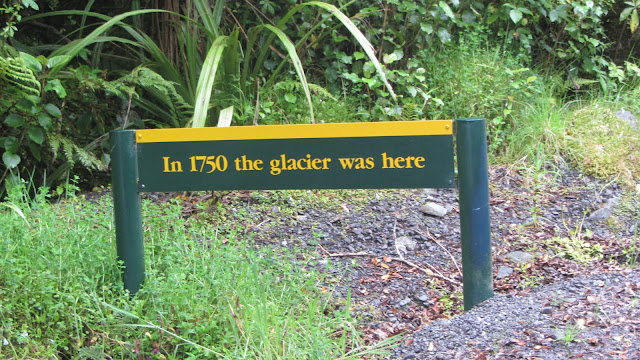 The walk to the glacier was pretty simple and not very long and we ran into the same girls again on this walk. Even though we saw the many signs telling us that no one without a guide is to go past this point, nearly everyone on the trail ignored them. Including us. 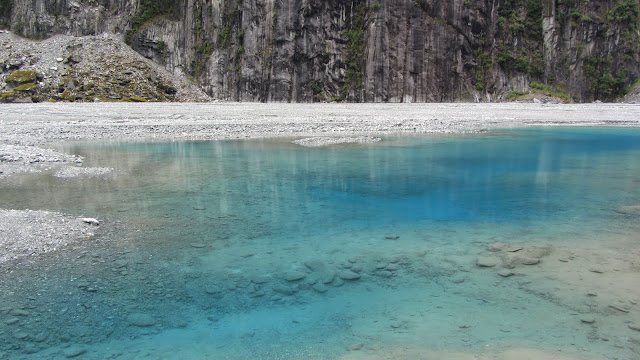 The glacier was ok, but really it was quite dirty and grey, similar to some of the glaciers found near Mt. Cook on the other side of the divide. Compared to some of the beautiful white and blue glaciers we had seen in Patagonia and Antarctica, Fox Glacier was a bit dull to us. 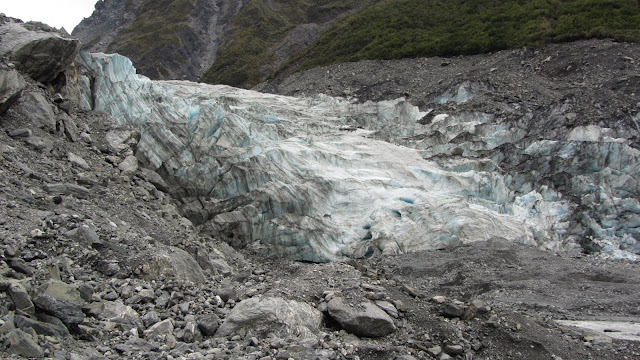 As we got to the closest safe viewing area by the glacier wall, we saw newspaper clippings of two tourists originally from Mumbai but living in Australia who were killed when they walked directly up to the glacier wall and touched it in January 2009. They were crushed when the glacier’s front wall collapsed on top of them. We stayed what we believed to be a safe distance away, but you really just never know. 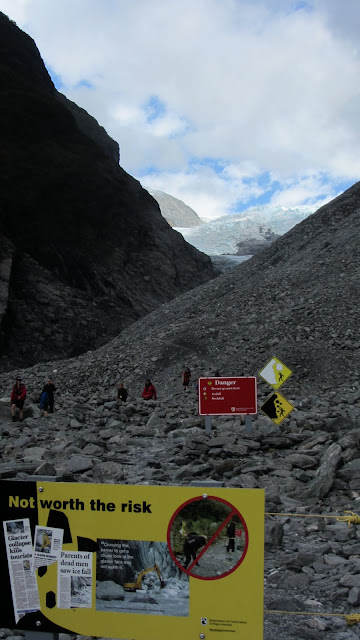 We decided to continue on to the town of Franz Josef. As we entered town, we decided to book our glacier walk tour with Franz Josef Glacier Guides. The weather seemed a bit iffy, but with our timing pretty well crunched, we had to go for it. 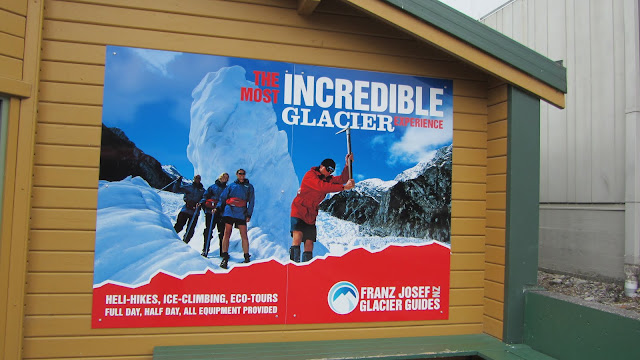 The next day was our glacier walk. The morning was a bit grey, but our hike was set for 3pm so we crossed our fingers for better weather later in the day. We checked in and got all of our gear set – boots, raincoats, special socks, etc. We were pumped to be walking on a glacier again! 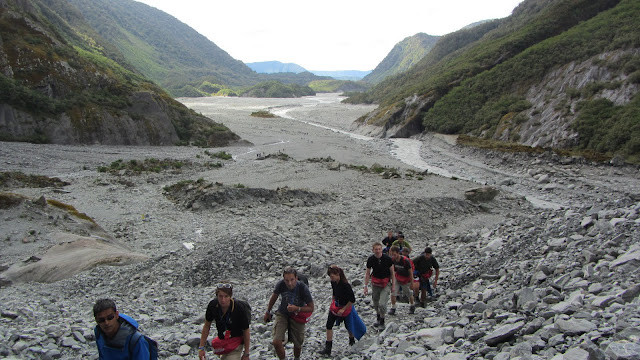 The guides from Singapore and Canada were really great and the walk was fun. The weather wound up turning out pretty nice for us and we had a wonderful time walking on the glacier and taking in the scenery. 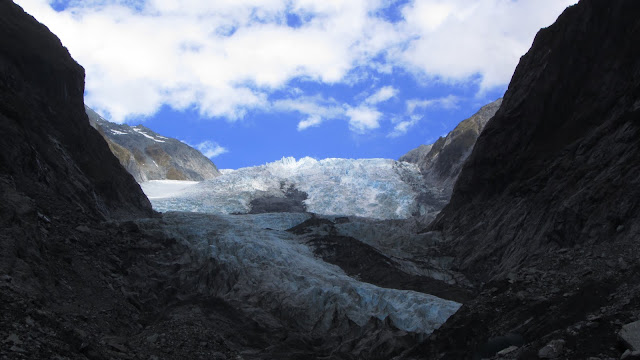 Not many people can say they have walked on two glaciers in their lives! 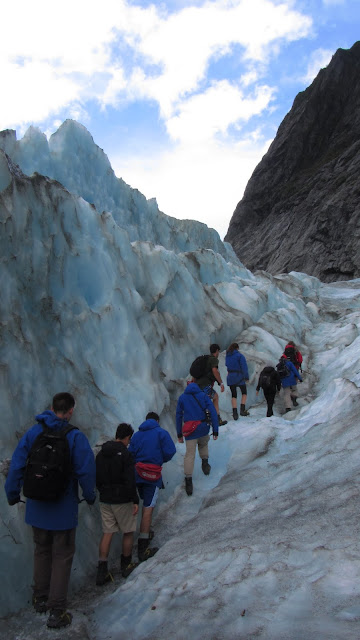 This glacier, like all glaciers, is a moving, active beast. Just four days before, a group of four tourists was walking near the glacier without a guide at 9:30pm. I have no idea why anyone would think that was a good idea, but it seems they did. 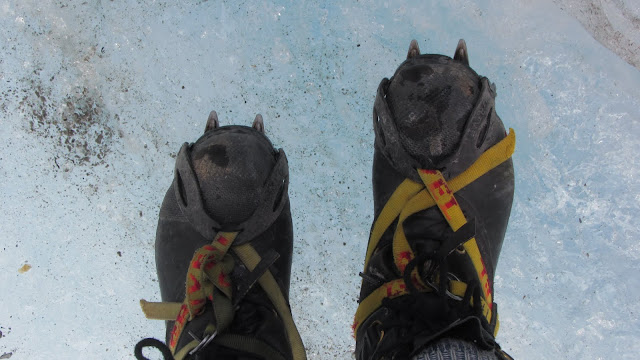 Sadly, two young female tourists, one from China and one from Malaysia, were swept off of their feet while they tried to cross the Waiho River in the dark. They were killed. These glaciers, while beautiful, can be quite dangerous, as well. 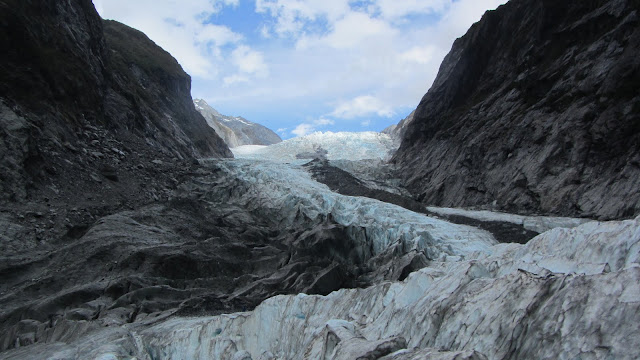 After a long cold afternoon on the glacier, we went back to our hostel room, changed, and walked to the local hot springs. Entry to the hot springs was free when we showed our ticket from the glacier walk. The pools were really well designed, (manmade unfortunately, the natural ones always feel far more organic) and it felt nice to soak our muscles in the hot springs. 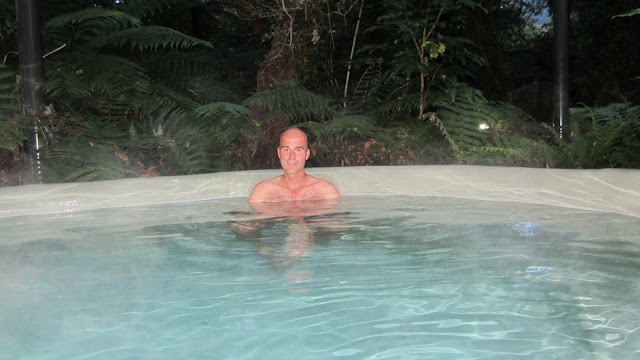 After a quick shower, we made a nice dinner of stuffed jacket potatoes (baked potatoes) and chilled out in a nice quiet hostel with no bus parked outside. Seeing glaciers is always an impressive experience and we were very happy we had seen both in good weather and safely.