The drive to Whakatane was once again stunning. New Zealand scenery certainly does not disappoint.

The main draw to visiting Whakatane is the famous White Island. This marine volcano is thought to be over 100,000 years old, which in volcanic terms, is actually quite “young.” To get there, you need to take a boat or helicopter, as it lies some 48km (30 miles) offshore. It got its name from Captain Cook who first discovered White Island in 1769. He called it White Island because from afar it simply looked white. He never actually got close enough to it to realize it was an active volcano. 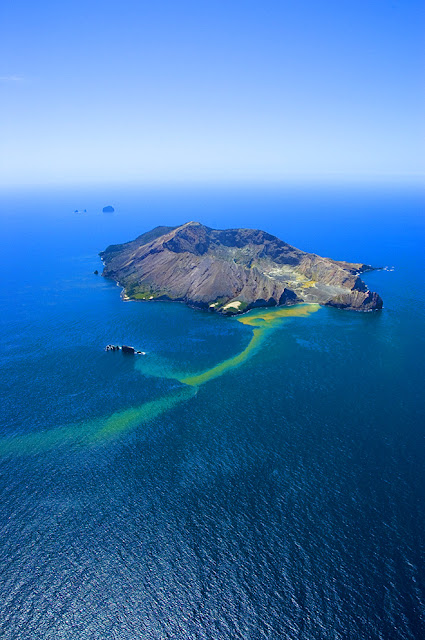 With our newfound love/fascination with volcanoes, we were so excited about this one! It sits out in the middle of the ocean and spews steam and sulfuric gases. I mean how incredible is that? The photos alone had us so excited for the visit.

Once a site for mining sulfur (much like Kawah Ijen in Indonesia), production halted when a massive landslide and lahar wiped out much of the island, including the miners and their equipment. 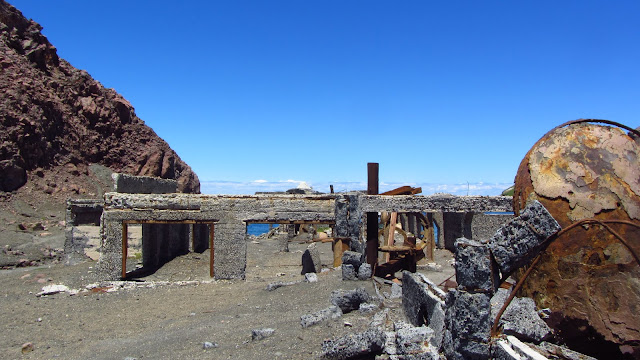 Now, the island is owned by the Buttle family that like the idea of owning a volcano, and consider it a wonder of the world. I definitely agree as it is one absolutely incredible place! The New Zealand government tried to buy the island from the Buttles in the early 1950’s, but it wasn’t for sale and in 1953, White Island became a private scenic reserve. 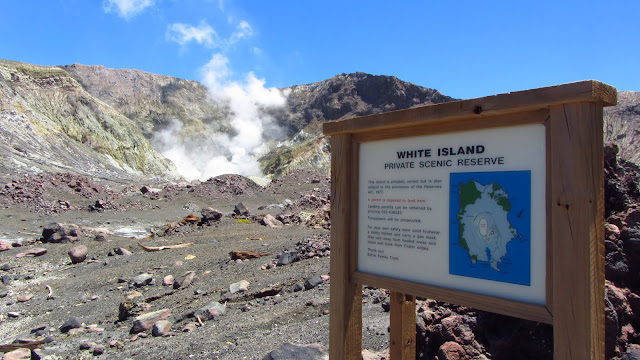 Our day began early as we headed to the office of PeeJay tours for our exciting day on the volcano. We enjoyed a quick coffee and pastry before boarding our tour boat. Once we left shore, we realized we had lucked out with absolutely perfect weather! You never know in New Zealand! 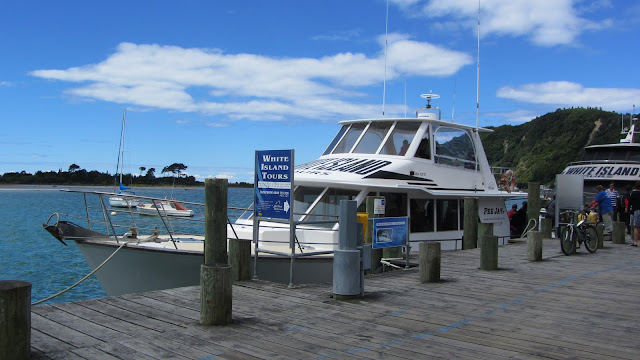 As we headed towards White Island, we were treated to a magnificent surprise! A huge pod of more than 100 dolphins! These black, white and gray beauties surrounded our boat and swam with us, enjoying our wake. We even got to see two dolphins mating at 30mph right in front of our boat’s bow! It was breathtaking to see nature so raw and up close like that. And this wasn’t even mentioned as part of our tour!

The dolphin encounter was so surreal. I had never seen so many dolphins in my life! And these guys are so tiny and fast, it was just awesome. We were lucky as our captain let us float for a while and just soak in the moment and watch these dolphins swimming all around us. We tried to get some decent photos and videos, but they were just too fast for us to get any really nice photos. 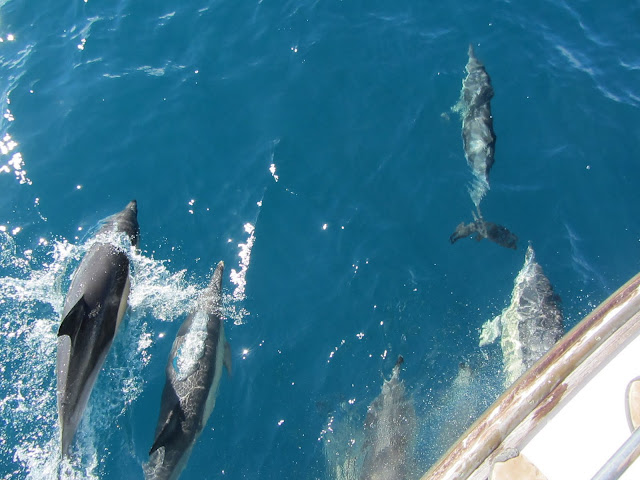 We did manage to snag this great shot of a mother and baby dolphin – the baby was so tiny and adorable! 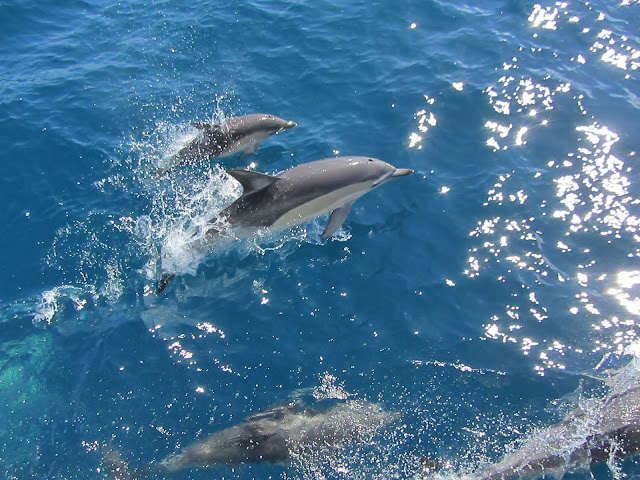 The sheer number of them surrounding our boat was staggering. It really brought me to tears. If the water wasn’t so freezing, it would have been great to have a swim with them! 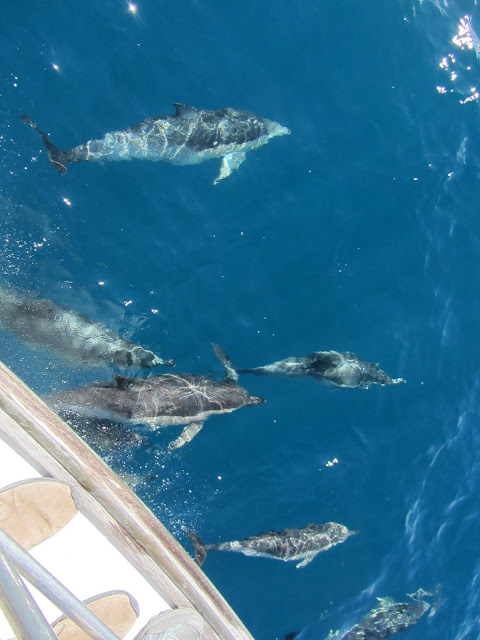 As we approached White Island and began to dock, we really got excited. The steam can be seen for miles, but the sulfuric smell really intensified as we got closer. 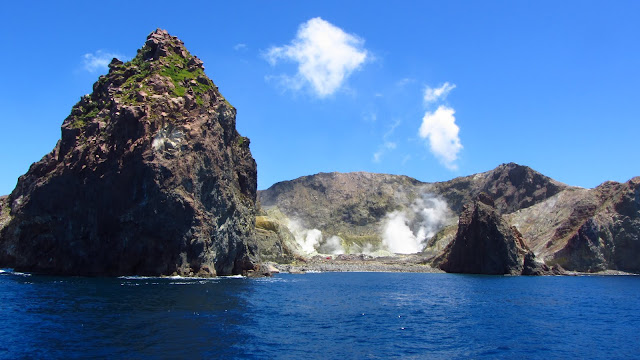 We were broken off into two groups and instructed on safety rules of the island. It is an active volcano, after all, and there are pockets of boiling hot water and steam that often cause injuries. One woman in our group was taking a photo soon after we set foot on the island. While taking a photo, she stepped into a pool of boiling water and burned her foot. She had to head back to the ship for medical attention and missed practically the entire tour! 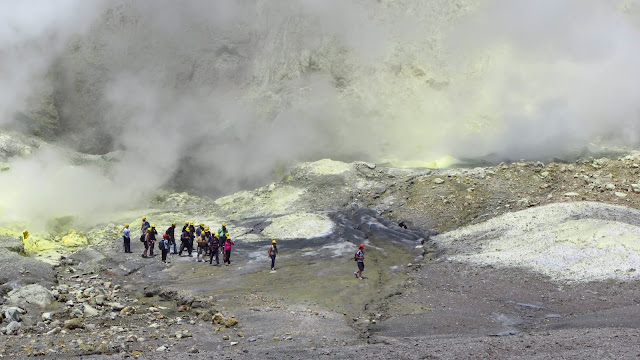 The scene that we walked into when we first landed on the island felt like setting foot on the moon. 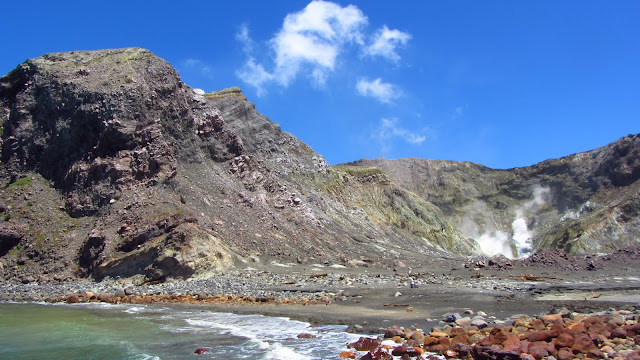 Volcanic rocks strewn about, steam billowing from open pockets of the island, huge cliffs and many craters. 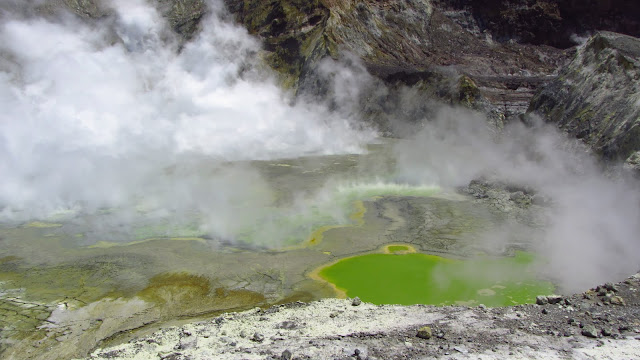 At the entrance spot, we had a look at some of the old mining equipment that was destroyed in the landslide so many years ago. 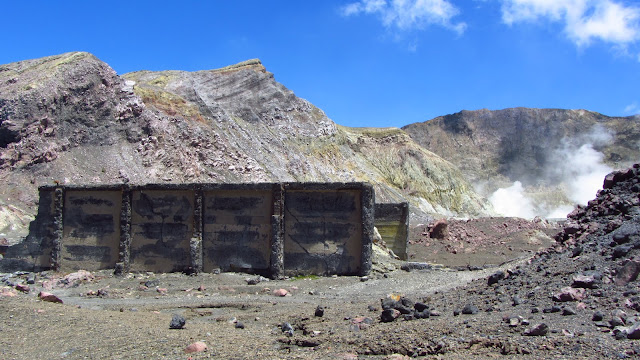 We donned our gas masks for a cute photo op, but they were actually necessary at times, as the sulfuric fumes can get quite powerful at times. These high quality masks are wonderful and had us wishing we could get some to send to the miners at Kawah Ijen, Indonesia who oftentimes don’t even mine with so much as a paper mask! 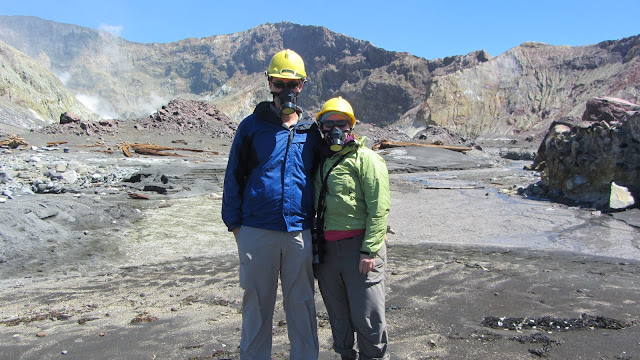 The landscape on this volcano was amazing, with bright patches of yellow and green where pockets of sulphur build and mud bubbling from steam rising from below the surface. While we were there we saw some scientists taking some samples for research. 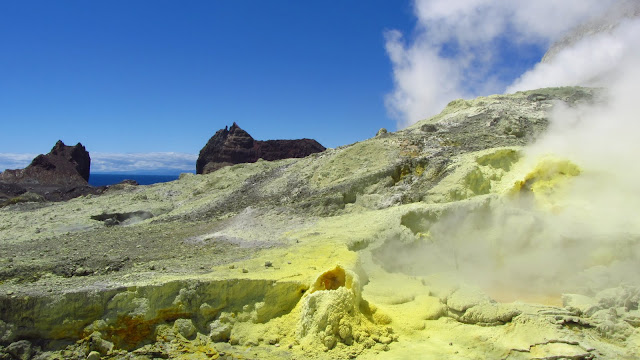 After our fascintating walk around this active marine volcano, we headed back to the zodiacs to take us back to our boat. Our captain took us for a cruise around the island so we could have one last look. 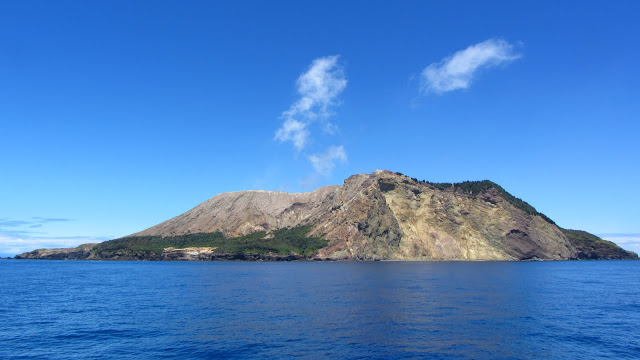 Then, the staff handed out our tasty box lunch and we soaked up the scenery for the ride back to Whakatane.

It was a gorgeous day out on the water and a fantastic day exploring the wonder that is White Island. If ever taking a trip to New Zealand, make sure to visit this amazing natural attraction.