As a tourist in Thailand, it’s almost impossible to avoid the elephant rides offered all over the country. Since Heather and I both consider ourselves to be animal lovers, we researched these experiences upon first arriving in the country. We quickly discovered that many of the elephants used in Thailand’s booming tourist industry are badly mistreated, and work under conditions of extreme physical and psychological stress. Instead of taking elephant rides like most tourists, we decided to focus on ways we could help conserve these beautiful animals in their natural habitat. On a previous solo trip to Thailand, I had taken an elephant ride while staying on Koh Samui island. Sitting on a basket atop a slow, laboring elephant while being led around a small well-worn path quickly lost its allure; I much preferred catching a glimpse of wild elephants in the jungle on this trip at Khao Yai National Park. 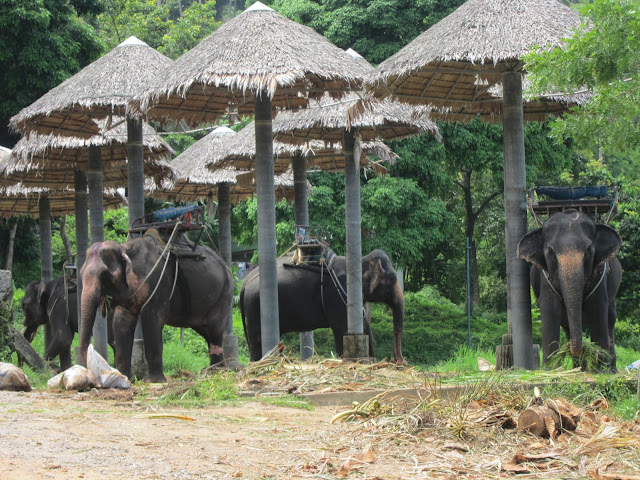 In addition to viewing these magnificent animals in the wild, we had also heard about a special park in northern Thailand, where old, disabled, and other lucky elephants could live a more relaxed life without having to give rides or perform tricks for tourists. Instead, eco-conscious tourists are allowed to visit the park’s elephants and partake in more humane activities like feeding them fruit by hand, helping them bathe in the river, and learning about elephant conservation. This unique place, called Elephant Nature Park (ENP), was founded in 1996 by the amazing Lek Chailert. 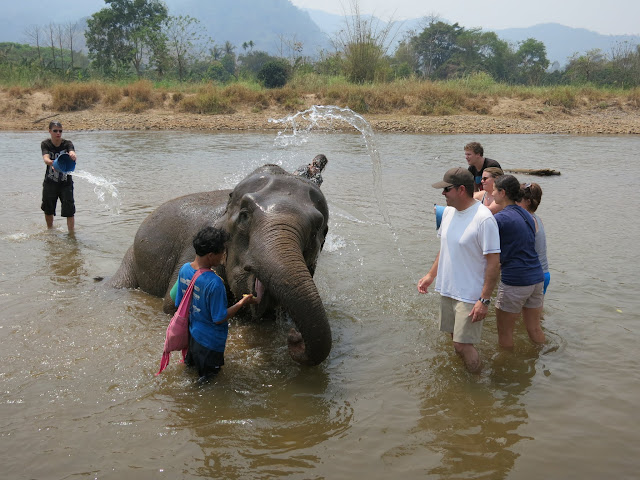 Unfortunately, while we had already decided that we wanted to visit and volunteer at Elephant Nature Park, the Thai Conservation Department started conducting a number of questionable raids on the park. We wanted to go but also didn’t want to get wrapped up in any legal trouble. After monitoring the situation for a couple weeks, we decided to just give it a shot and see what happened.

So, after stuffing ourselves silly with delicious food in nearby Chiang Mai, we met up at the ENP office in the old city one Monday morning and boarded vans bound for the park where we would be spending a week volunteering with the gentle giants. 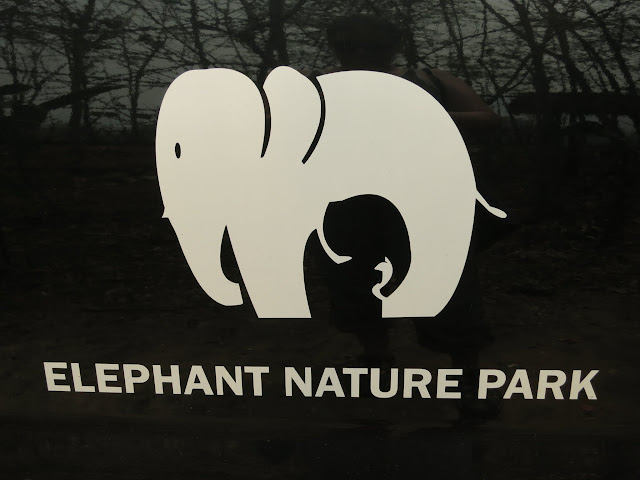 Luckily, they gave us a break and allowed us to enjoy ourselves the first day at the park. We were given the opportunity to partake in the activities one-day visitors get to enjoy. We started by feeding elephants their morning snack of fruit. 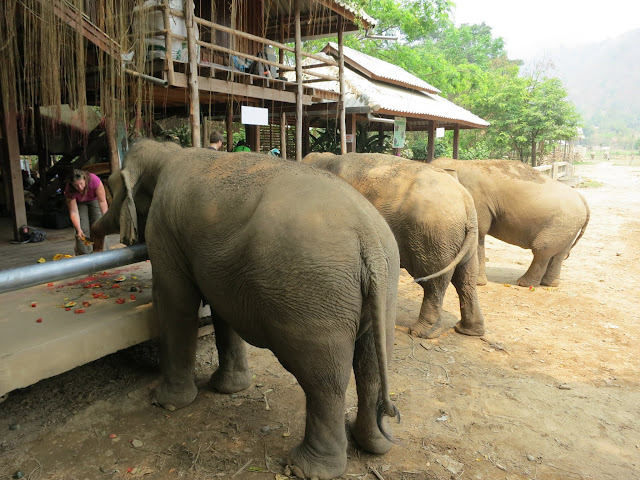 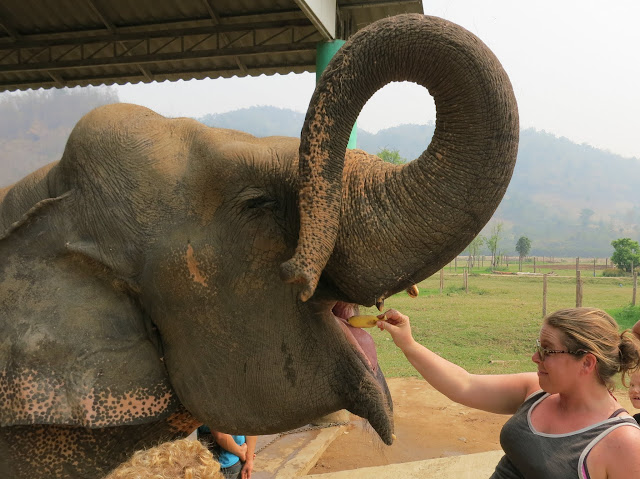 Next, we walked around the park grounds, getting the opportunity to walk alongside the herd and learn the (often sad) stories of some of the elephants residing here. There was Jokia, the 50-year old female that had formerly worked in Thailand’s logging industry. She had lost a baby in an accident while she was two months pregnant and years of hard work and abuse had left her blind in both eyes. At Elephant Nature Park, she made friends with Mae Perm, another old logging elephant. Gentle Mae Perm acts as Jokia’s eyes, leading her around the park. The two are always seen together, often “hugging” each other with their trunks. 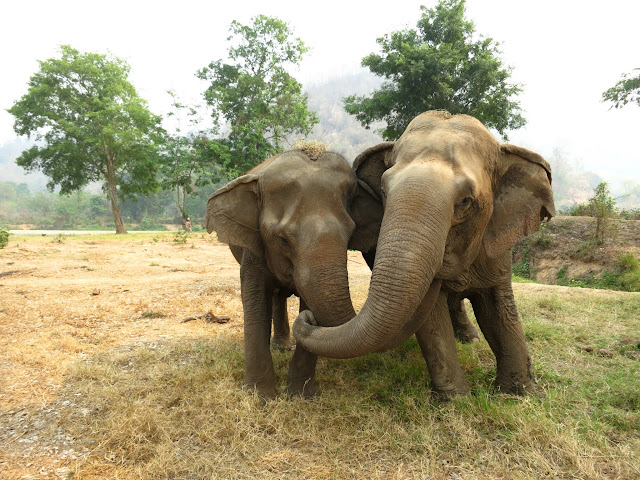 Then there was Malai Tong. While working in the illegal logging trade, she stepped on a landmine. It left one of her legs shortened and severely disfigured. She now limps around with the injured leg spastically shaking back and forth. 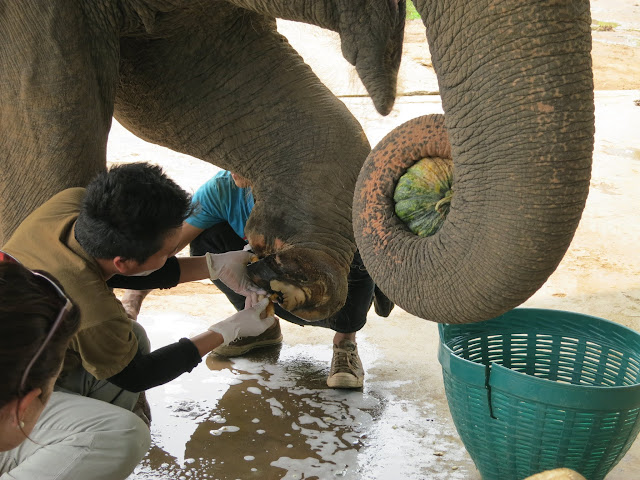 Not all of the elephants in the herd were subjected to trauma, though. A few baby elephants have either been adopted or born in the park. Each day we enjoyed watching the baby boy, named Hope, get up to antics chasing around other juvenile elephants and taking solo baths in the river. 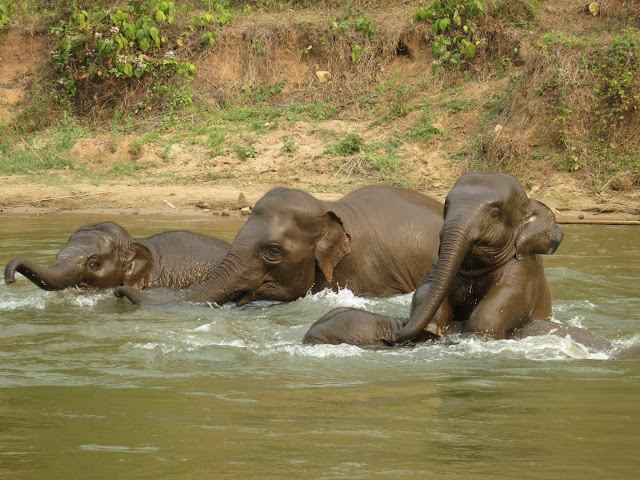 Our favorite elephant was the adorable baby girl Faa Mai. With her little fat rolls and voracious appetite, Heather and I nicknamed her the “chunkster trunkster”. It was so much fun feeding little Faa Mai her favorite food – watermelons – and watching her slap them on her foot using her trunk to juice them before sliding them into her mouth. 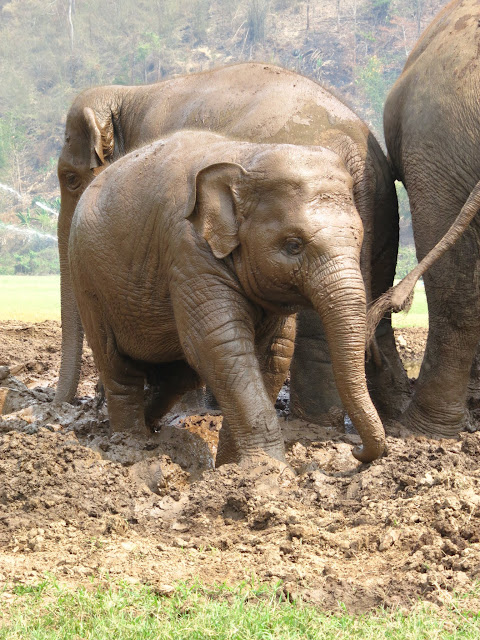 After our relaxing first day touring the park, we got straight to work on the second day.

Over the course of the week, we cycled between different tasks. The easiest was working with the elephant’s fruit, which had to be washed, cut, and put into baskets for them. Each one of their diets is tightly controlled, with a specific quantity and mixture of bananas, watermelons, pineapples, and pumpkins doled out. 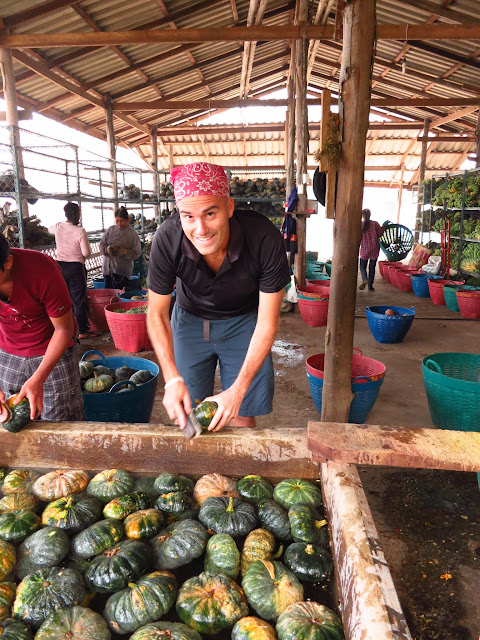 Most mornings, we went around and cleaned out their pens, emptying the uneaten food and copious amounts of poo. Yes, elephant poo really is as big as you think it is. Luckily, it wasn’t that smelly. 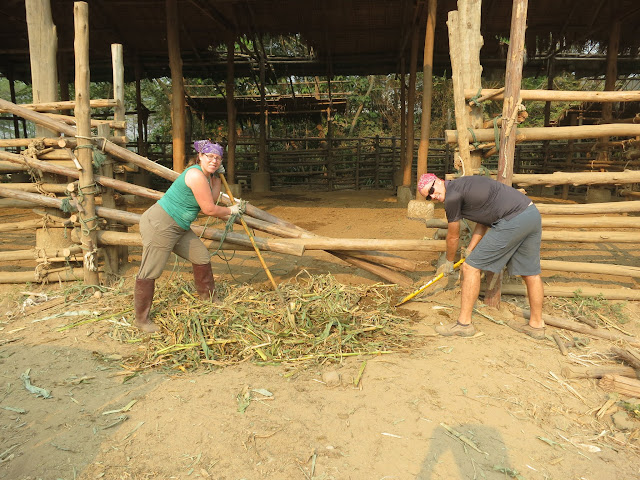 Occasionally, we went offsite to gather additional food for the elephants. This involved things like cutting down corn stalks and hacking down banana trees with machetes. 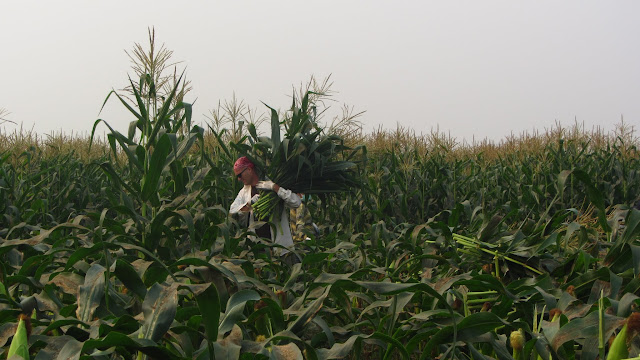 Working out in the fields like this really was the hardest work, oftentimes in the sticky hot tropical climate. 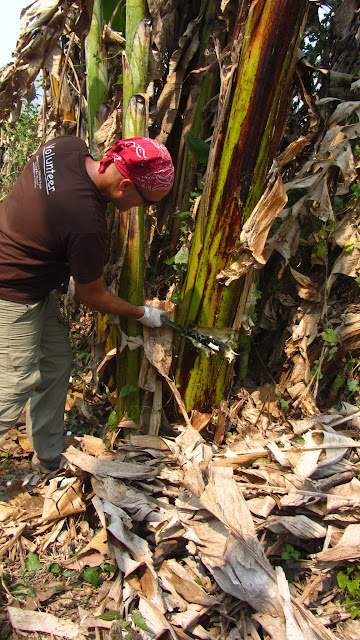 Of course, it wasn’t all hard work at Elephant Nature Park. We were given free time most days to take part in some of the regular visitor activities, like feeding the elephants and bathing in the river. 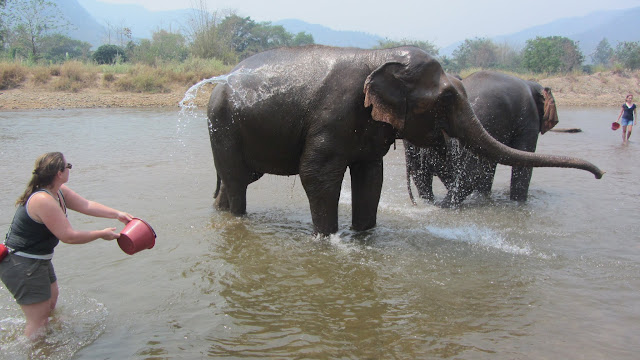 In addition, we got to take part in special activities like visiting the little kids at a local school and helping out with the park veterinarian. 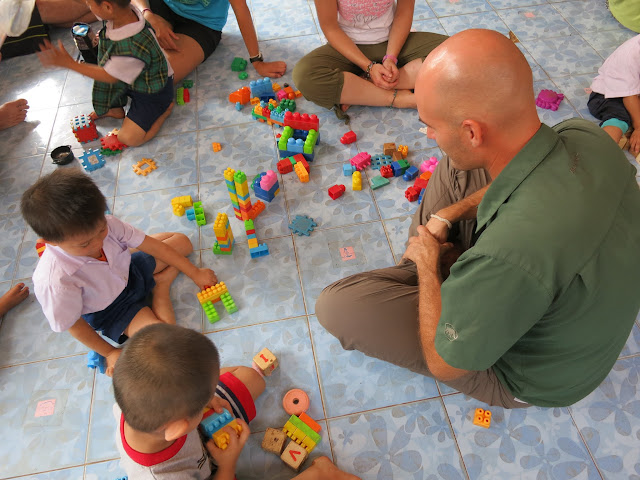 And of course, working alongside the elephants each day – even when shoveling their poo – was a treat in itself. 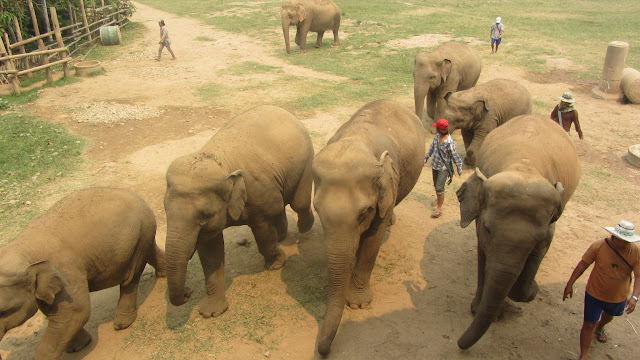 The park’s founder, Lek, was over in Burma during the first part of the week, campaigning to help save elephants still working there in the teak logging industry. When she returned, we got to meet this amazing woman, and watch her interact with the park’s herd. 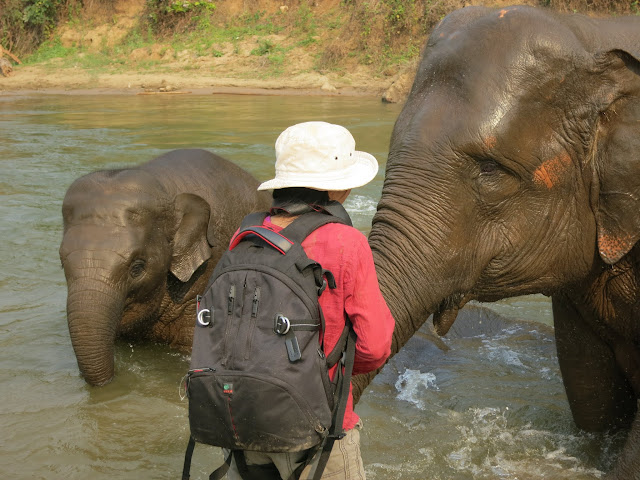 The most incredible moment was following her into baby Faa Mai’s pen and watching her lullaby the Chunkster Trunkster to sleep. Like some sort of elephant whisperer, she was able to softly sing and fan down Faa Mai. 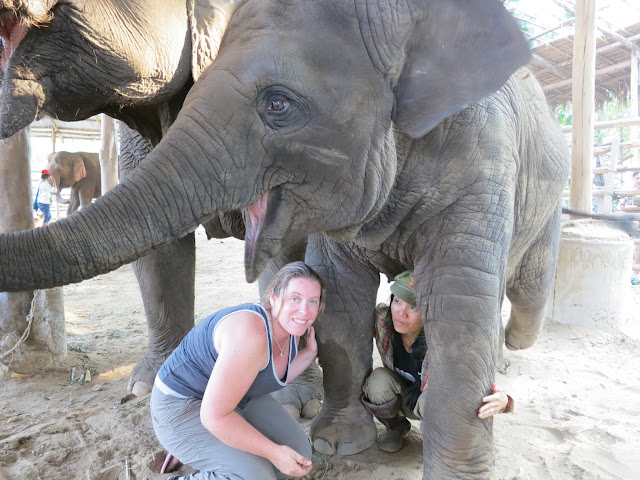 After the baby elephant stretched out on the ground and closed her eyes, we took turns lying next to her and taking pictures. Little Faa Mai was even snoring! 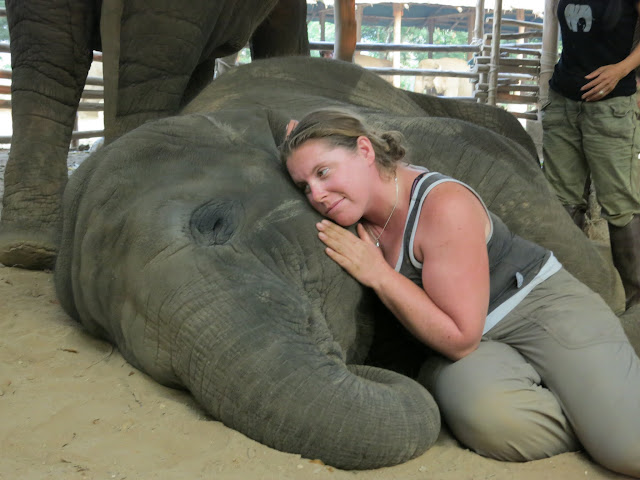 Before we knew it, our time at Elephant Nature Park was drawing to a close. We savored our last moments with the elephants, especially Faa Mai, before saying our final goodbyes and heading back to Chiang Mai. 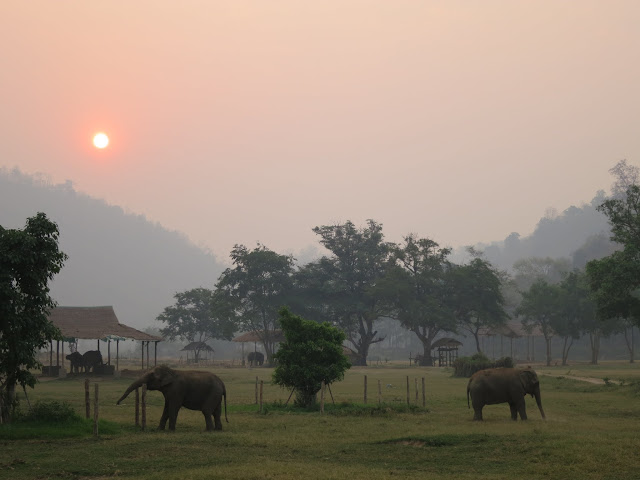 Our next stop would be our final destination in Thailand – Chiang Rai.