Fraser Island is one of the popular stopovers for backpackers heading up and down Australia’s East Coast. Located near Hervey Bay, many people visit the island using 4WD “tag-along” tours, where you take turns driving a Landrover (following a tour leader) over the sandy beaches and tracks which traverse the large island during the day, and camp in beachfront tents each night.

Unfortunately, neither one of us had a valid drivers license. And even if we did, I’m not sure we would have been up to the challenge of handling a 4WD in these tricky conditions. Luckily, we stumbled upon Cool Dingo Tours, which uses specially-adapted 4WD buses and caters to a backpacker crowd to offer 3-day trips around the island at a reasonable price. Instead of roughing it under a tent, we’d also be enjoying very comfortable (indoor!) accommodation in the Cool Dingo dorms onsite at the Kingfisher Bay Resort near the center of the island. 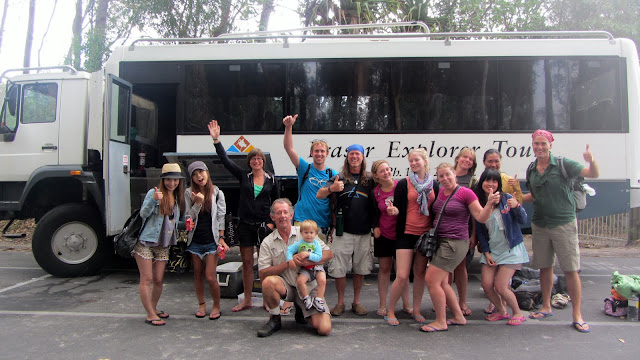 We were picked up early from our hostel in Hervey Bay and brought to the ferry for the 30 minute trip over to the Kingfisher Bay Resort. 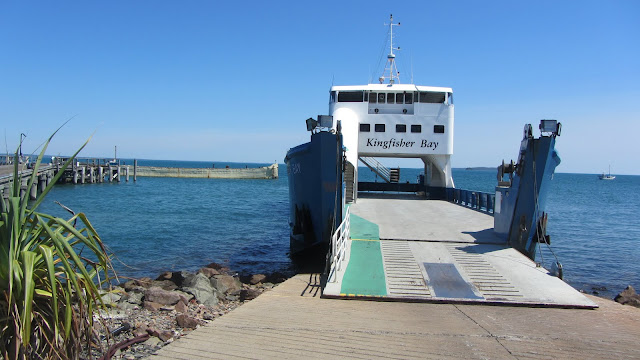 Off the ferry, we were met by our tour guide and bus driver for the next few days, Dave. He was an awesome guide, full of interesting knowledge and funny stories, and we had a blast listening to his thoughts and theories (some of them pretty out there!). Here’s a video of his “Snoop Dingo” rap:

After just a few minutes of getting tossed about on Fraser Island’s bumpy dirt roads, we were lucky enough to spot a dingo roaming around a section of forest that was recently burned in a wildfire. 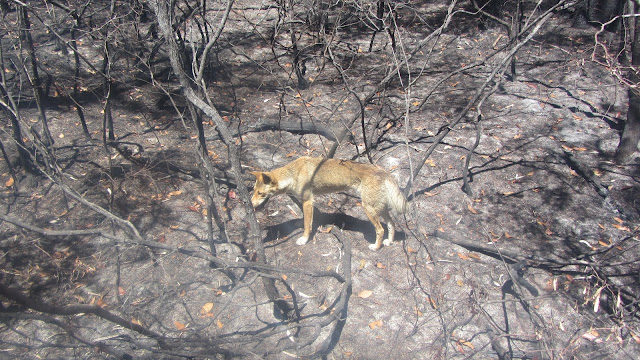 Dave explained that these dingoes have little interest in harming humans (though there have been a few cases of attacks, especially with children). Sadly, their numbers are falling, and any dingo involved in an attack is captured and killed. We were a little concerned when Dave opened the door to the bus with the dingo wandering just outside (we were sitting right next to it!), but sure enough it had no interest in us and kept moving along. 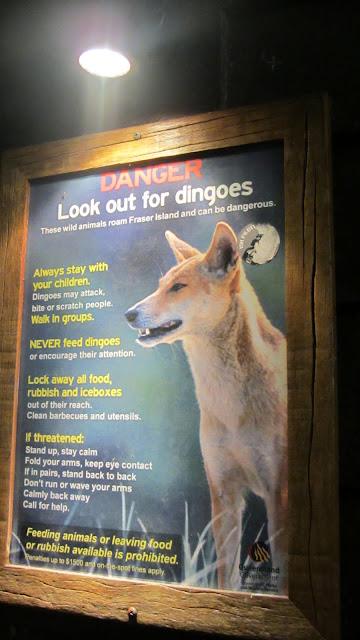 We spent the rest of our first day walking around a couple central parts of the island, learning more about its history, and the native flora and fauna. 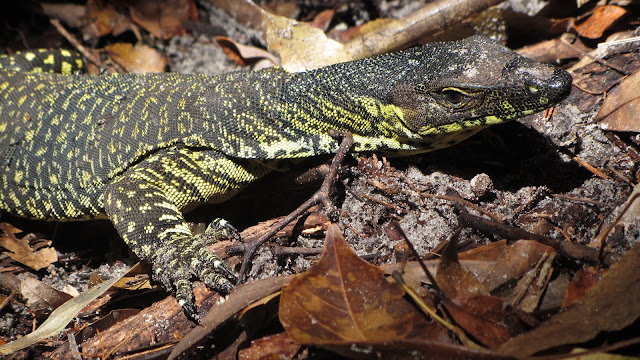 In addition, we visited a few of the perched freshwater lakes in this area. Thanks to the lack of development and filtering effect of Fraser Island’s sand, these lakes are considered some of the cleanest in the world. Without a doubt, the highlight was taking a dip in the crystal-clear water of Lake McKenzie. 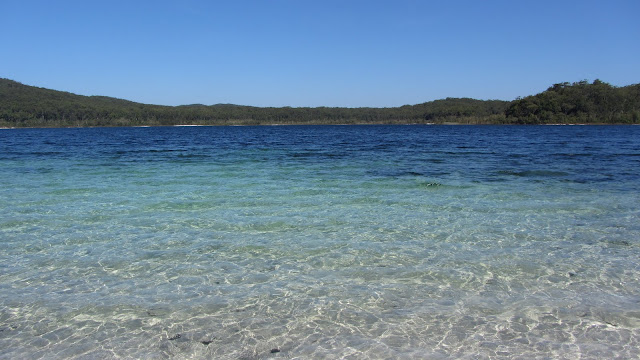 Day two brought us up the Seventy Five Mile Beach, which sits on the island’s east side. Dave drove our bus right on the beach, keeping us on the harder sand next to the waterline and zig-zagging with the breaking waves. During the drive up this beautiful, desolate coastline we were lucky enough to spot more Humpback Whales breaching offshore. 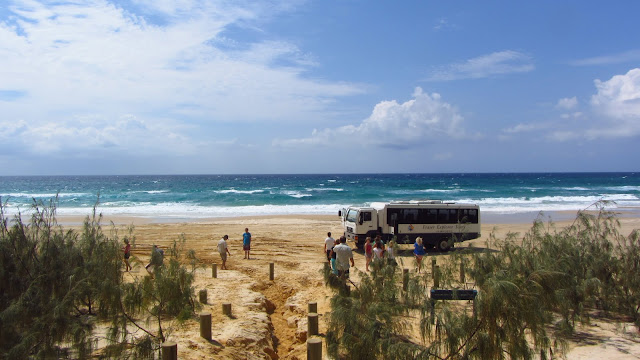 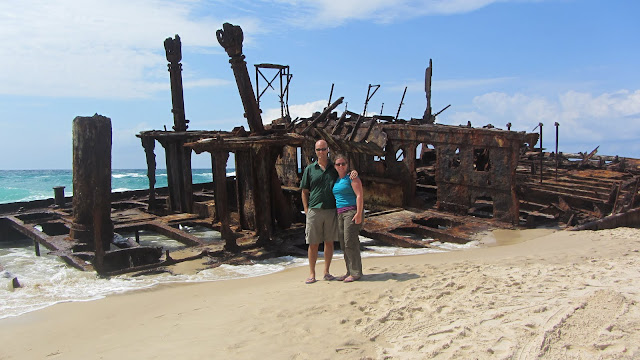 A couple of our fellow busmates opted for a scenic flight tour in a small plane which took off right from the beach and landed next to the Maheno wreck. 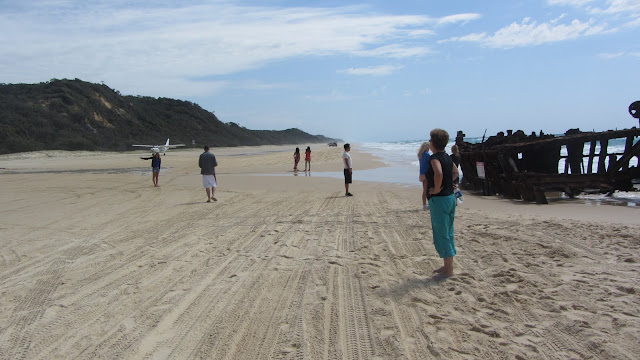 Our final day brought us to some of Fraser Island’s lesser-known sights, including a couple more perched lakes along with the massive Hammerstone Sandblow. These sand dunes were nowhere near as impressive as the ones we experienced near Huacachina, Peru, but it was still fun walking over them to the freshwater lake and onwards to the ocean. 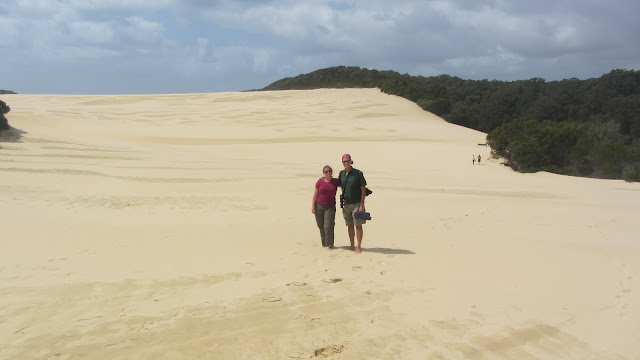 Our few days on Fraser Island were quickly drawing to a close. We took the ferry back to Hervey Bay, where we would be spending another night and have the opportunity to have dinner with some friends we met on the tour. It was time to move on to Queensland’s capital and biggest city, Brisbane.