After our incredible experience at Elephant Nature Park near Chiang Mai, we were so sad to leave them. But, we moved on to our last stop in Thailand, nearby Chiang Rai. We arrived by bus and quickly found a simple room at the Baan Bua Homestay.

We decided to explore the town and stumbled upon the gorgeous decadent gold clock tower in the town center at the intersection of Phaholyothin Road and Banpaprakan Road. The clock tower was built in 2008 to honor King Bhumibhol Adulyadej and bears the signature style of artist Chalermchai Kositpipat, who conceived and built the White Temple. At 7pm, 8pm and 9pm each night, the clock tower entertains spectators with a sound-and-light show. 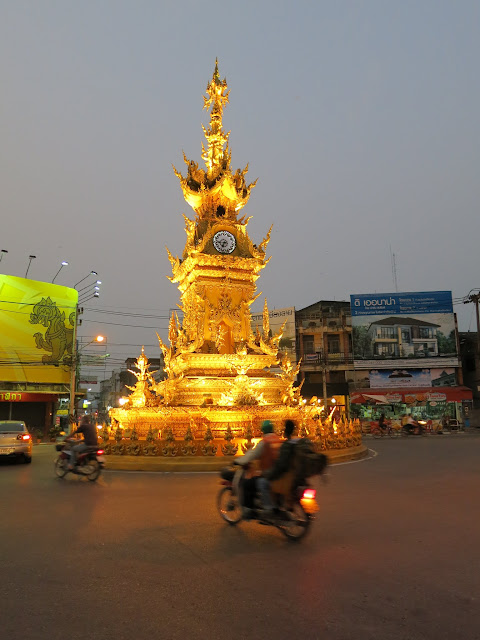 Just beyond the clock tower, we discovered a local selling one of Thailand’s street food snacks – fried quails’ eggs. Though it may seem a bit strange as a street food, they were actually quite tasty, served as the locals eat, with soy sauce and eaten with a toothpick. This would become one of our favorite ways to eat eggs (I highly recommend giving it a try next time you have fried eggs for breakfast!). Although considered a delicacy and demanding quite a high price tag in many parts of the world, in Thailand, we got eight quails’ eggs for just 20Baht or 70c US! 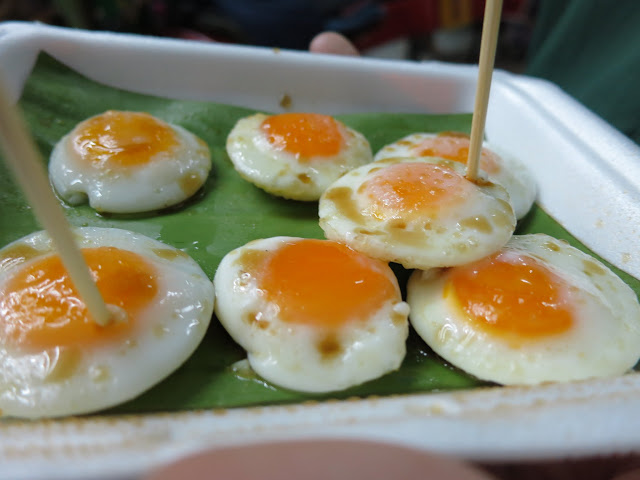 Although less popular with tourists, Chiang Rai is actually one of the oldest cities in Thailand and has a strong history of the Lanna Thai culture. While the roots of the Lanna culture are strongly evident in Chiang Rai, a new and modern artistic movement is most clearly represented in the city’s famous White Temple (Wat Rong Khun). Designed and built by Chalermchai Kositpipat, construction of the unique structure began in 1966 and is not expected to be completed until 60 to 90 years after the artist’s death. It reminded me of the similar story of the Sagrada Familia in Barcelona! 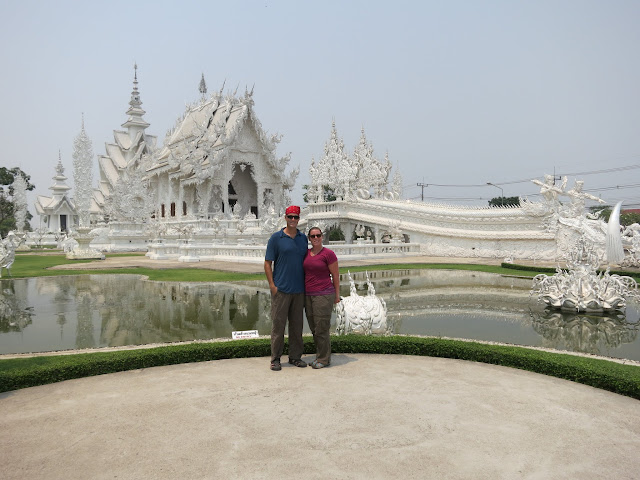 Located 5km from the city center, the White Temple exhibits avant garde statements and architecture unconventional to all other temples in Thailand. The artist chose white for the temple to symbolize purity, which I found quite striking and serene. 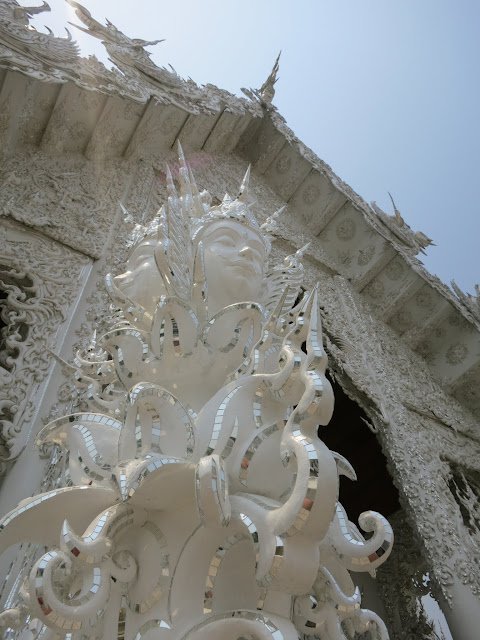 He illustrates orthodox Buddhist teachings about heaven, hell, karma and earthly sins, which can be graphically seen in the white hands reaching up from hell that greet you as you enter the bridge to the temple. 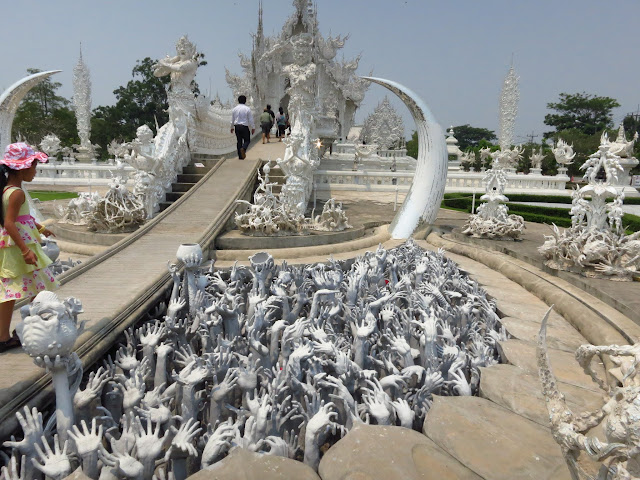 Inside, traditional Buddha statues are juxtaposed with elaborately detailed murals depicting modern icons, including Superman, spaceships, and even Michael Jackson in a modernist attempt to convey Buddha’s life and lessons. (Sadly, no photos were allowed inside the temple, so you’ll just have to trust us on this one!) All around the temple, skulls and modern characters find their way into the artist’s work. 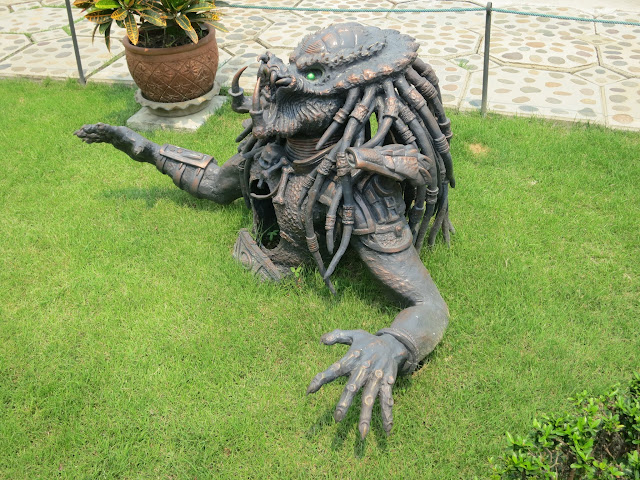 Even the restrooms were elaborately ornate! 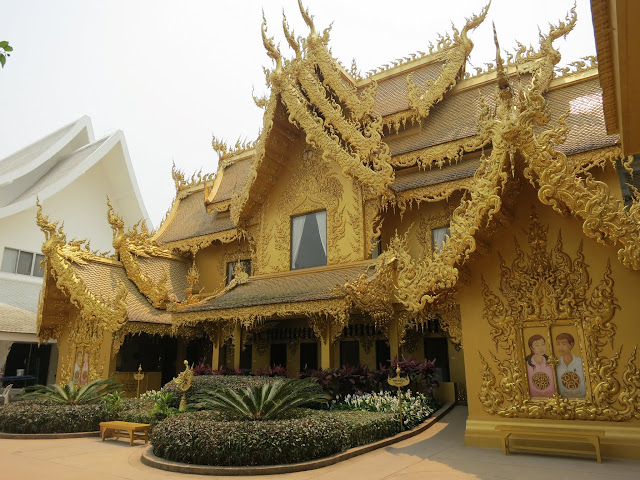 At night, we found a cute little night market where we’d grab a bite to eat. Our meal of choice was – what else? Chicken fried rice and some cheap beers. Can’t beat it! 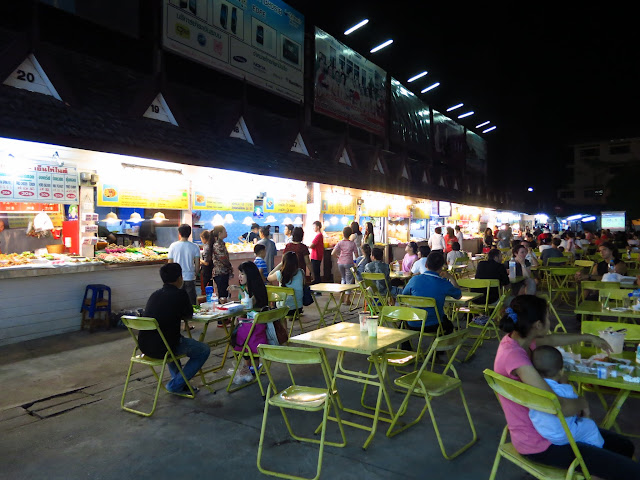 Sadly, it was time to say farewell to beautiful Thailand and hello to Laos!

NOTE: If you’re visiting the White Temple and want to get there on the cheap, catch a bus or a songtaew (shared “taxi” or covered pick-up truck) from the city center.