After rounding out our travels in Thailand in the northern city of Chiang Rai, we boarded a local bus for Chiang Kong – the Thai side of the border with Laos, separated from Huay Xai on the other side by just a narrow stretch of the Mekong River. We knew Laos would be more primitive than Thailand with less Western conveniences, so with that in mind, we took the opportunity to hit up the local 7-11 store one final time before departing for Laos.

Next, we headed down to the river for the quick longtail ride across to Huay Xai on the Laotian side. After getting a visa and clearing immigration at the riverside office, we stopped by the tiny duty free shop and bought a small bottle of vodka to take on our two day slow boat trip down the Mekong River. 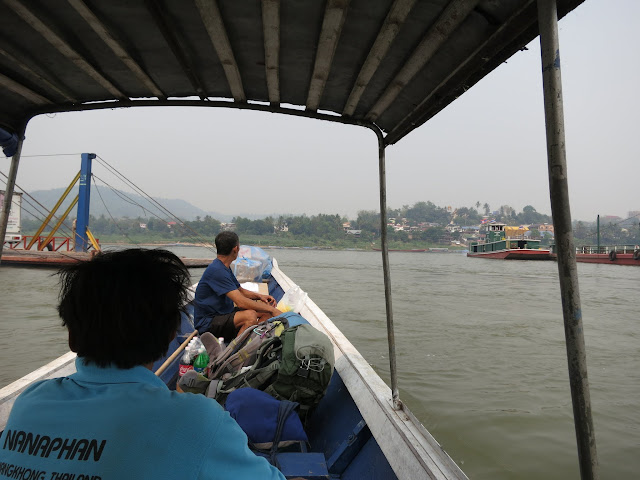 Then, we checked in at a nice local hotel with a view over the river and set out to explore Huay Xai. While a small town, we were still able to get everything done that we needed to, including picking up a local SIM card for my phone.

Finally, we ended our day with a cold and tasty Beerlao overlooking the river before grabbing dinner and getting to bed early in preparation for our slow boat journey down the Mekong the following day. 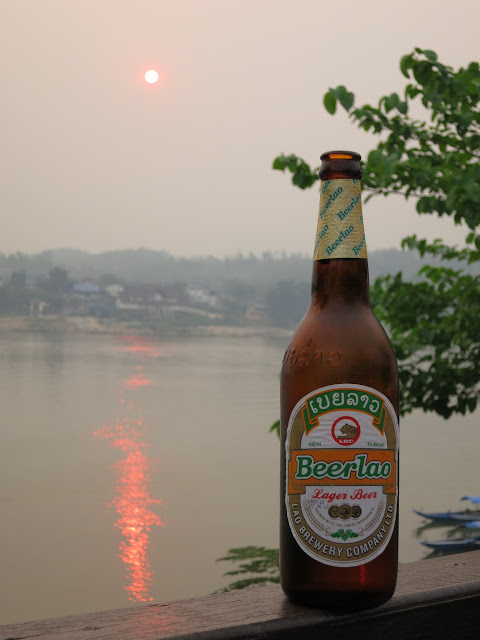 Before heading to Laos, we had heard a lot of different reports from other travelers that had taken the slow boat to Luang Prabang. Some people told us it was their favorite experience in Southeast Asia. Others said it was boring and a waste of time. Many told us to show up early in order to secure a seat and avoid having to crowd around the rattling engine. 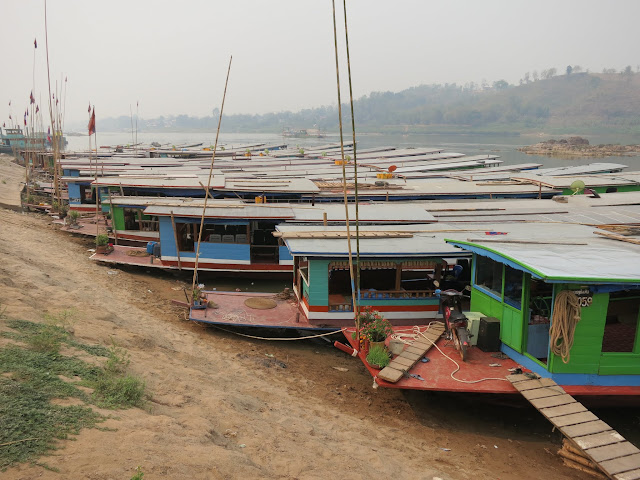 In order to beat the crowds, we got an early start and headed down to the departure area for the boats on the north side of town. Upon arrival, it took a while to figure out which boat was the one we needed. It turned out we were way too early – in fact we were the first to arrive. Needless to say, we secured a couple good seats. 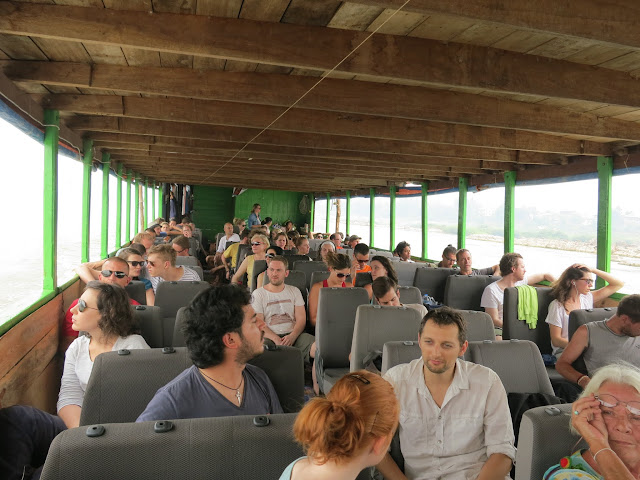 Eventually, some other passengers started trickling in. We met a couple nice guys from Canada that would become our friends for the 2-day long journey to Luang Prabang.

After waiting more than four long hours, our boat finally pushed off and started the long journey downriver. It turned out the boat was far from capacity that day and only about two-thirds full. I guess we hadn’t considered the fact that it was no longer peak season and there were less travelers than usual. 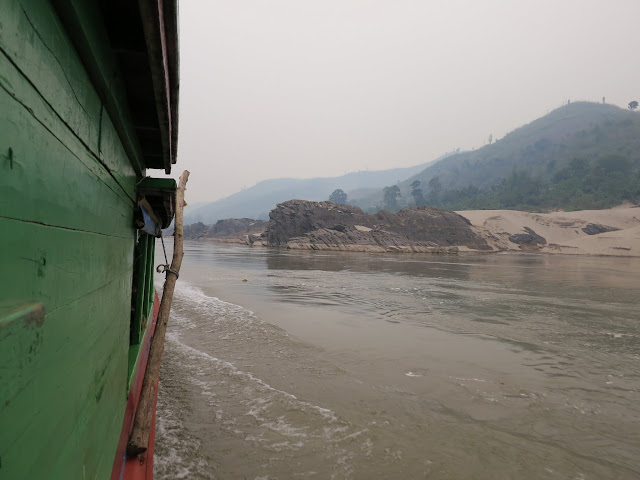 In addition to being the low season, it was also the time of year when many local farmers slash and burn the hillsides in anticipation of the new planting season. So much of this activity takes place that a permanent haze covers the region, obscuring the horizon and turning the sun into nothing more than a strange orange glowing ball you can actually stare at with your bare eyes. 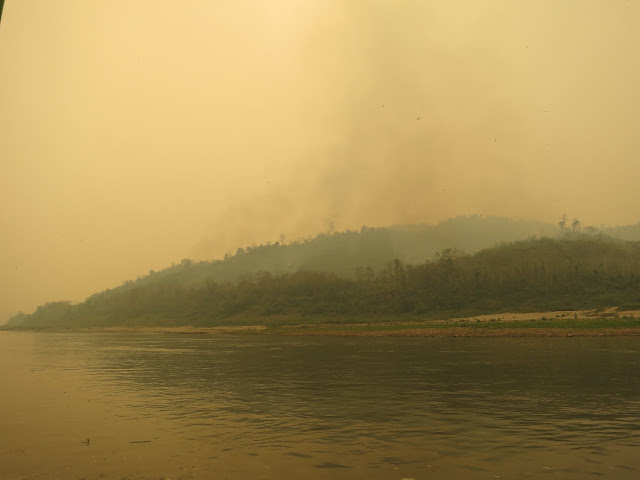 As we floated down the Mekong, we could actually see, smell, and even feel the results of the slash and burn farming. Our boat passed hills ablaze in fire, passing through thick smoke, with ash raining down on us.

It certainly wasn’t the most scenic way to take in the Mekong. Still, we were able to catch an interesting glimpse of the rustic Laotian countryside, passing tiny villages of thatched huts. 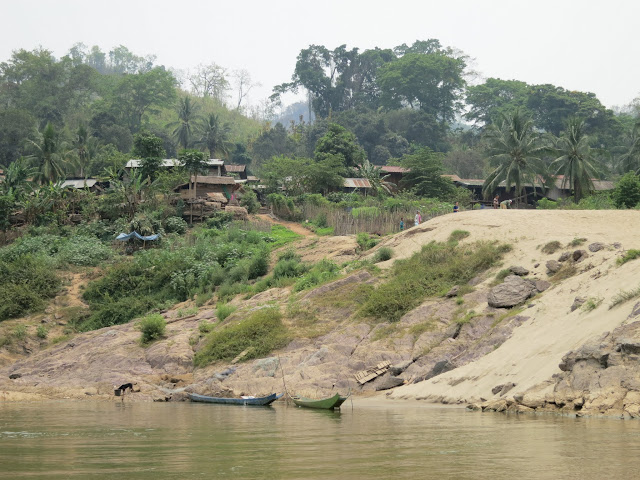 Along the river’s banks, locals thrashed rice, washed their clothes, and took baths. Many of the villages are only accessible by river and without electricity or any of the modern conveniences we all take for granted.

After a full day maneuvering downriver, we pulled into little Pakbeng – the halfway point and our stop for the night. 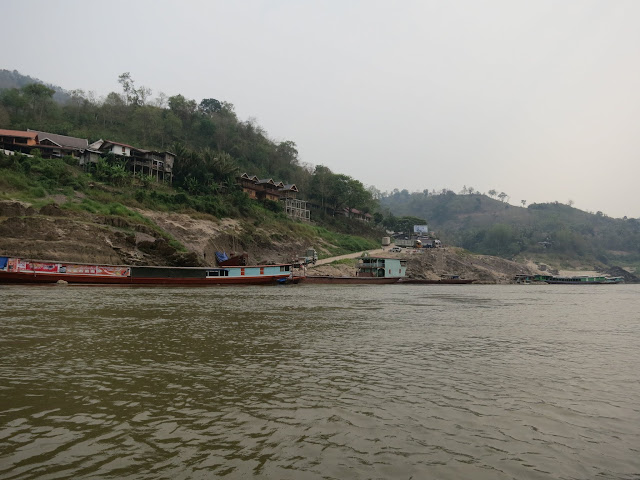 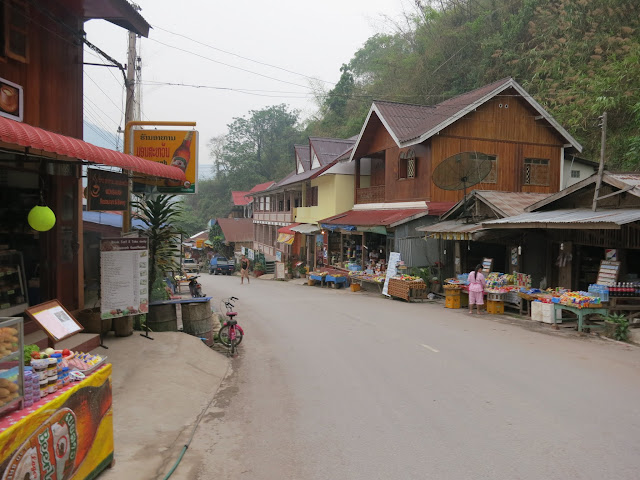 Pakbeng turned out to be a delightful little town. After exploring the full length of it, we settled on dinner at Hassan, where we enjoyed an amazing Indian meal. We thought about going out to drink at the “only bar in town”, but after passing several shady characters hanging out on the dark main street that whispered “opium, hash, yaba (crystal meth)?” we decided to pack it in and head back to the guesthouse. 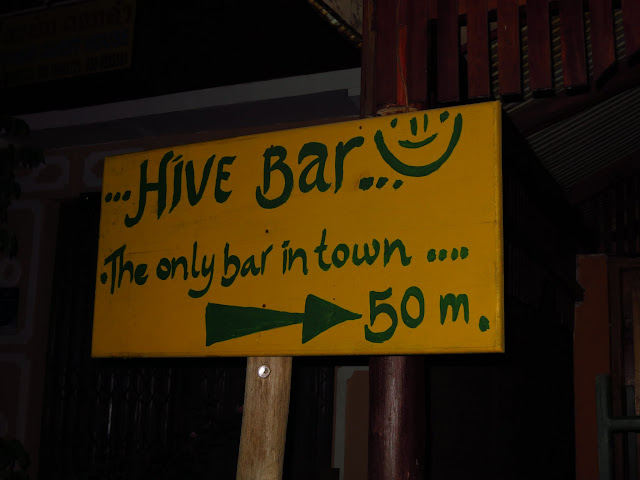 The next morning we decided we weren’t going to make the same mistake as the first day and took our time getting down to the boat. Instead of the same large, spacious boat we had taken to Pakbeng the day before, we were greeted by a much smaller boat at the dock. Luckily, there was still plenty of space, and after stowing our bags we found our way to a couple seats and settled in for the ride. 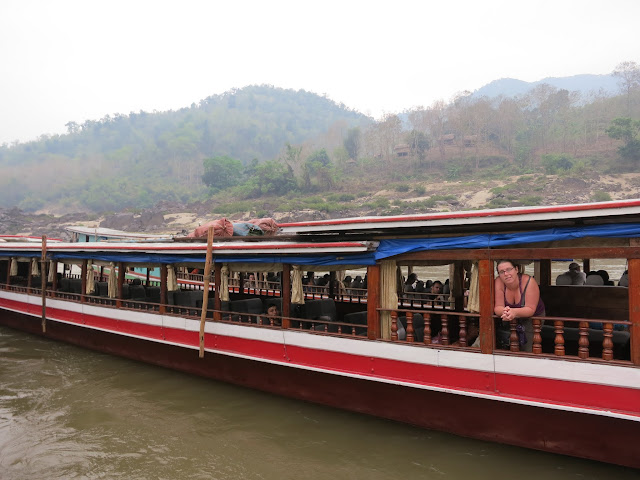 A light rain had fallen the previous night, which helped clear some of the thick slash and burn haze. For the first time in days, the sun was actually shining like normal instead like a strange orange blog faintly glowing through the smoky sky. 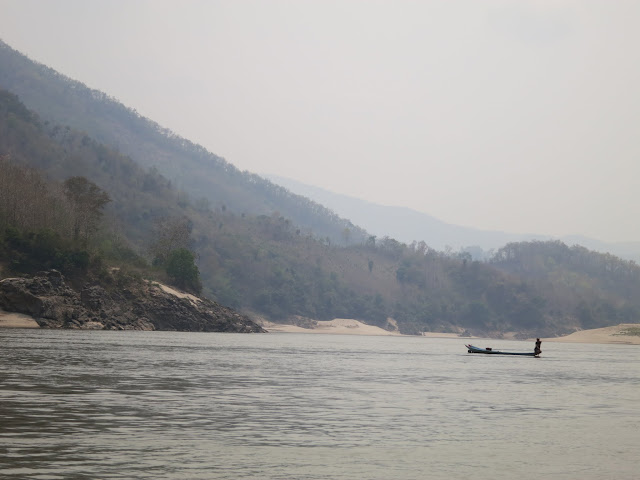 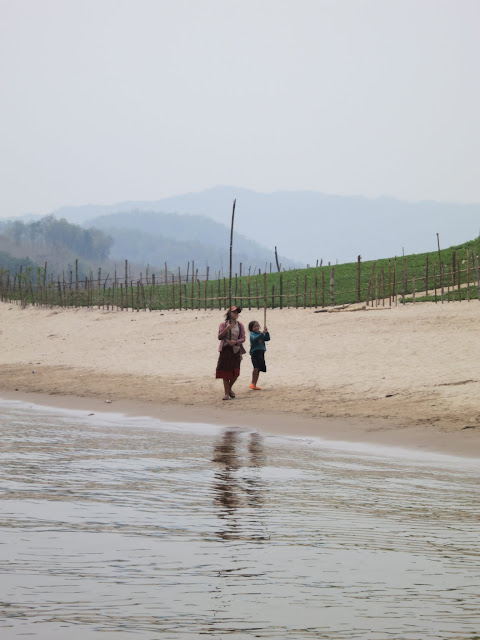 In parts, the river was narrow and moving fairly fast. We were glad we were in a smaller boat. 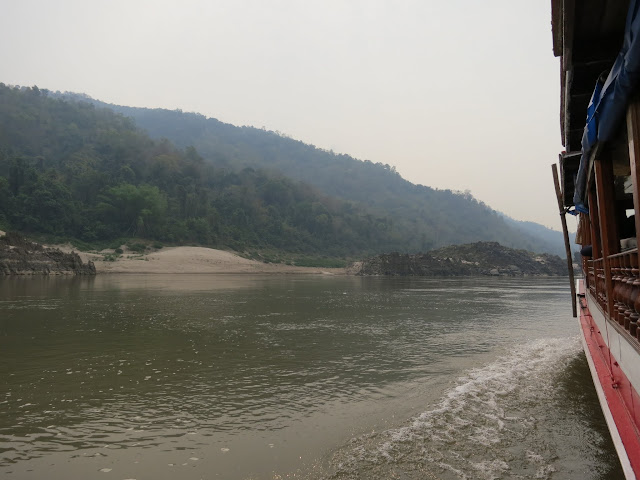 At one point, we crossed paths with the “fast boat” – a speedboat which makes the same journey that we were spending two full days on in a grand total of seven hours. Sadly, these speedboats have a terrible safety record and – while fast – choosing this option is dangerous and uncomfortable. We were glad we had chosen the slow boat instead of being packed into the tiny speedboat passing by us. 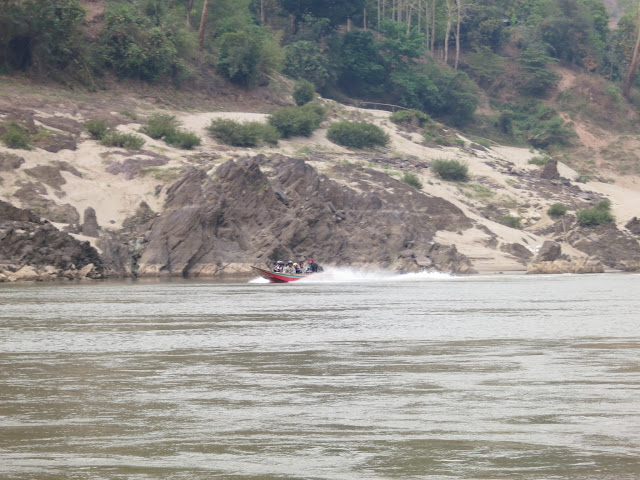 As twilight approached we slowly started noticing more signs of civilization. Luang Prabang, the “big city” in Northern Laos (population: 50,000), and our final destination was crawling into view. 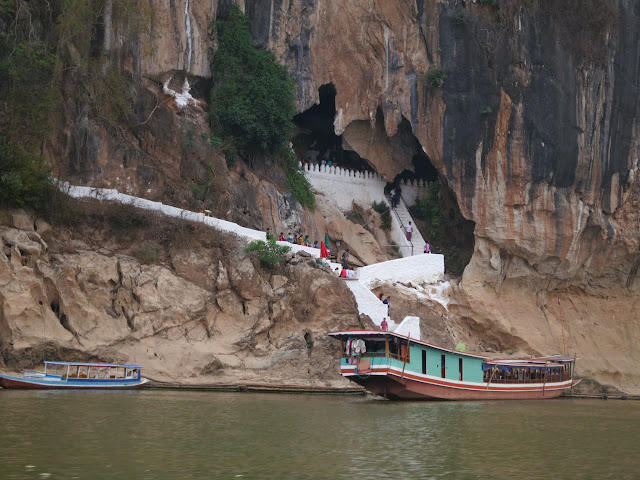 After two full days on the boat, we were glad the journey was drawing to a close, but still enjoyed our time on the slow boat. While opinion seems to be split on this travel option in Laos, we felt it was a fun and interesting way to explore the Mekong.

30 thoughts on “The Slow Boat Down the Mekong River from Thailand to Laos – Huay Xai to Luang Prabang, Laos”