Following a fantastic time at Khao Yai National Park, including an awesome spotting of wild elephants, it was time to continue on into Thailand’s interior. Our plan was to head to the ancient capital of Ayutthaya, 85km north of Bangkok, before continuing up towards the Golden Triangle and our next destination, Laos.

Since we had such a great experience on the sleeper train to Bangkok, we decided to take the train to Ayutthaya. Of course, this wouldn’t be a sleeper. Far from it. We decided to go truly local and ride the 3rd class train, where seats are completely unreserved and there is no limit to the number of passengers than can be squeezed in. 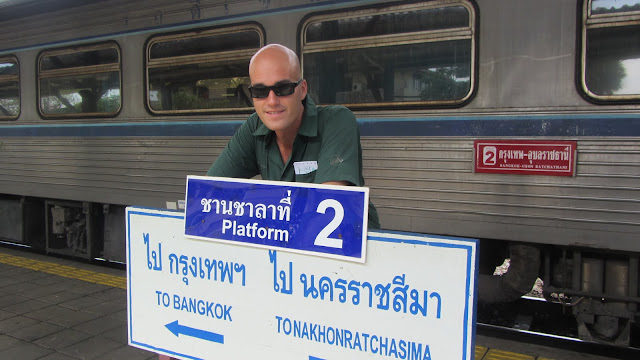 Luckily, it was only a three hour ride, and we had a good time watching the countryside roll by and checking out colorful characters occupying our railroad car, including a non-stop stream of food vendors selling everything from beer to fried insects. 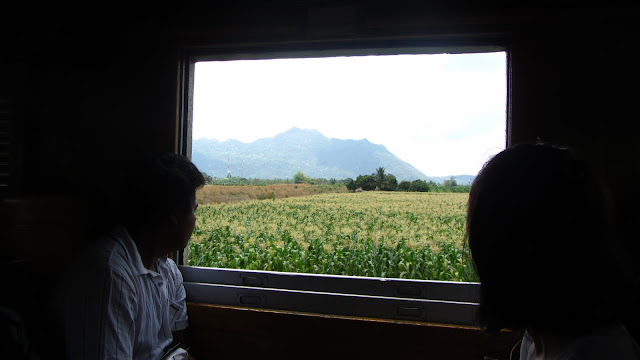 Finally, we arrived in Ayutthaya, taking a few minutes at the train station to decompress from the hectic journey and focus on finding a place to stay. After making a quick phone call to confirm availability, we hopped in a tuk tuk and headed for the wonderful Prom Tong Mansion guesthouse.

We were delighted to be offered a clean, spacious, and quiet room. The staff was extremely helpful in recommending nearby sights, and within a few minutes of checking in we had already planned our stay in the city.

That afternoon, we joined a sunset boat tour. Ayutthaya is actually an island surrounded by three rivers, with the mighty Chao Praya passing along its western edge. This same river flows through Bangkok, serving as an important conduit for trade and commerce in both modern and ancient times. 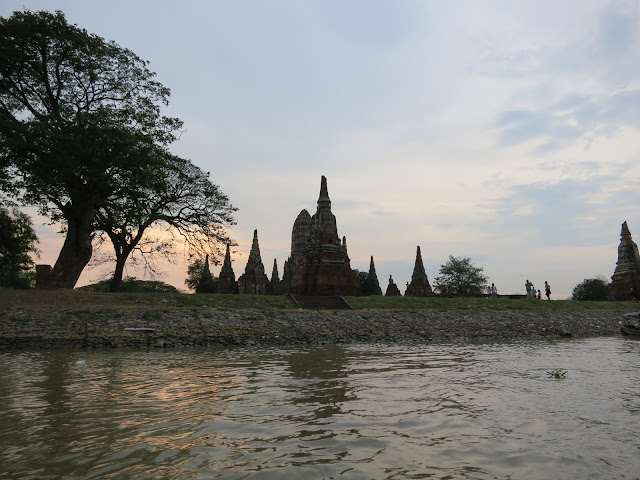 By the early 1700s, Ayutthaya had become one of the most important trading centers in Asia and the world. It is estimated that the population at the time was 1 million, making it the biggest city in the world at that point of time – much bigger than Paris or even London. Eventually, the Burmese grew jealous of their neighbor’s fantastic wealth and prosperity. In 1767, they invaded the city for the second time, looting and destroying everything in sight. Atrocities committed by the Burmese army were so terrible that it has marred the relationship between these two countries even to this day.

During our sunset boat cruise, we got a sense of what a grand city this once was. Our longtail boat puttered up the rivers and canals cutting through the city. Along the way, we waved at adorable children lining the banks. 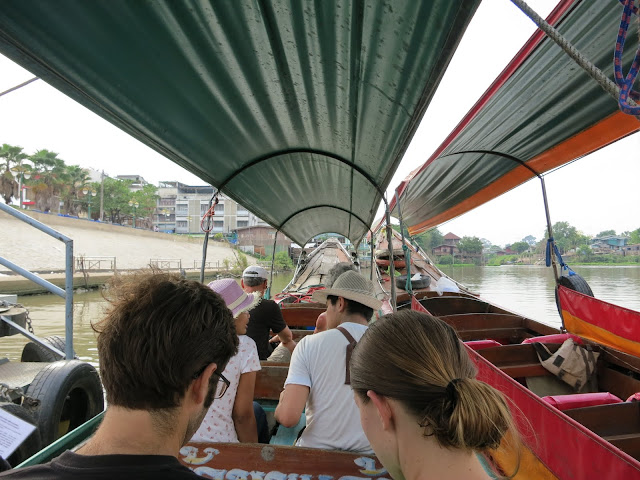 The boat tour included a number of stops at some of the significant temples found along the water. At our first stop, Wat Panan Choeng, we marveled at the gleaming 19m high seated Buddha. 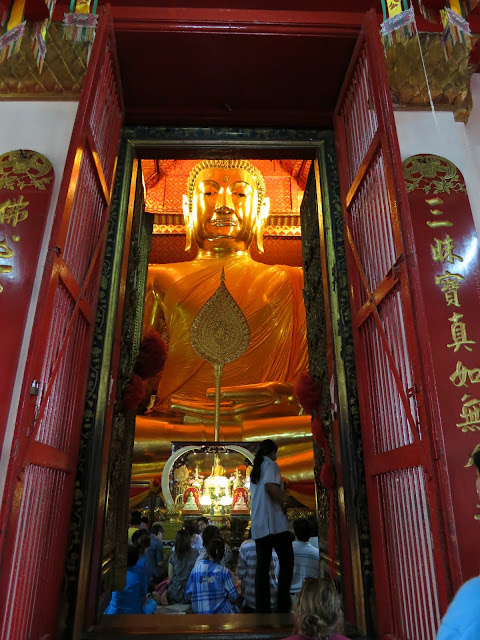 Next, we passed Saint Joseph’s Church. This 300 year old Catholic church was built by Portugese traders which made Ayutthaya home. During its heyday, the city had a diverse ethnic population with residents from all over the world eager to share some of the kingdom’s great wealth. 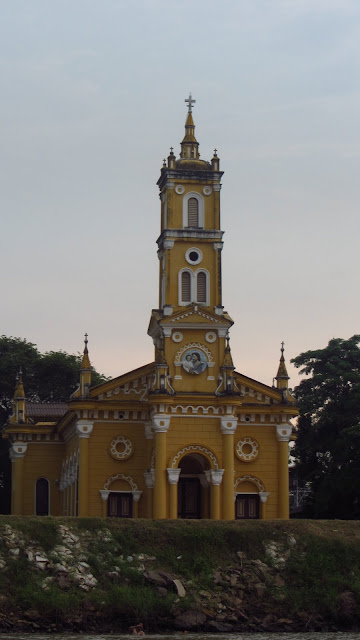 Finally, we were taken to Wat Chaiwatthanaram. Built in the Khmer style, it is commonly referred to as the Angkor Wat of Thailand. While it now stands in ruins, it’s still a magnificent sight, and turned out to be a great place to watch the sunset. 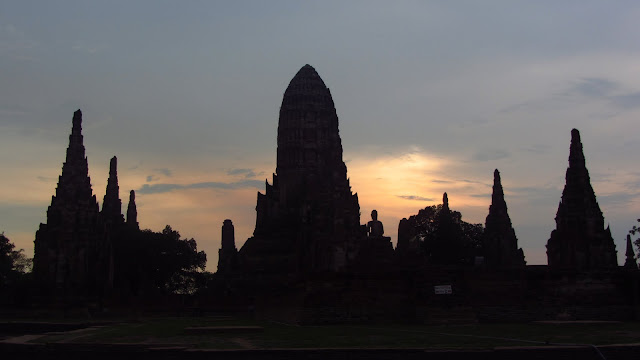 During the tour, we got to witness some of the devastation caused by the October 2011 floods which swamped Ayutthaya. The 3m high water mark was clearly visible on the surrounding buildings. In many places, sandbags were still in place. Destroyed cars and buildings were everywhere. 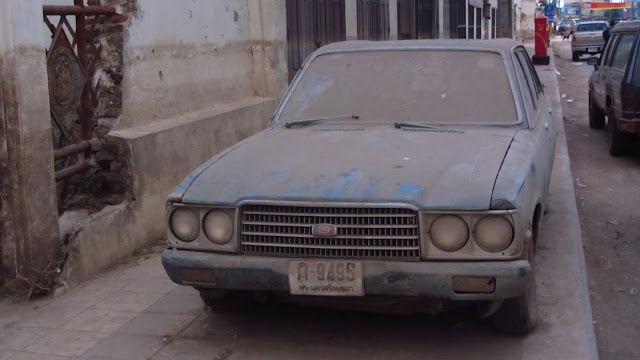 Back at our guesthouse, we spoke to the Swiss manager about the floods. He had amazing pictures showing the extent of the damage. He stayed during the flood, living on the third floor and getting around the city streets using a boat.

The next day, we rented bikes from the guesthouse in order to explore some of the other temples and ruins around the city. It was extremely hot and very hard work, but still a good way to get around. 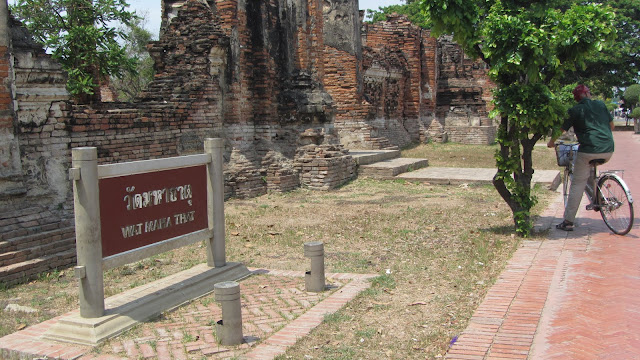 Our first stop was Wat Mahathat, a large temple that was completely destroyed by the Burmese and now stands in ruins. A huge number of headless Buddha statues can be found here, supposedly due to the canon balls that were fired by the Burmese army. It’s probably most famous for the large fig tree which has grown around one of the separated heads. 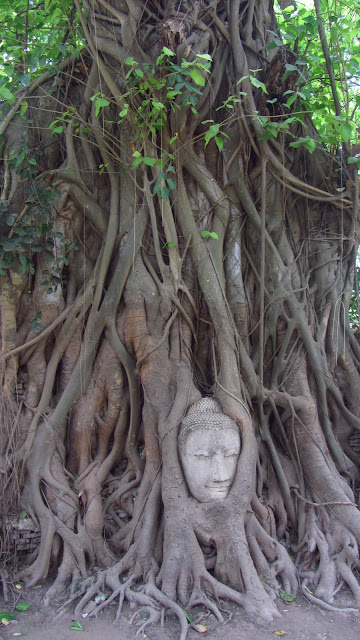 Back on the bikes, we visited some more temple sites which are in ruins, before stopping for lunch near Wat Phra Si Sanphet. 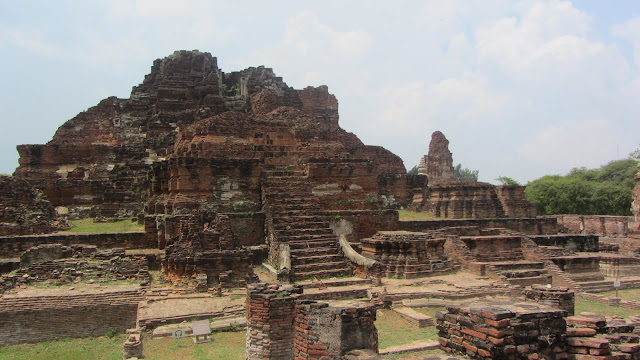 It was near here that we had to start sharing the side of the road with a steady stream of elephants filing past, carrying tourists on their backs. 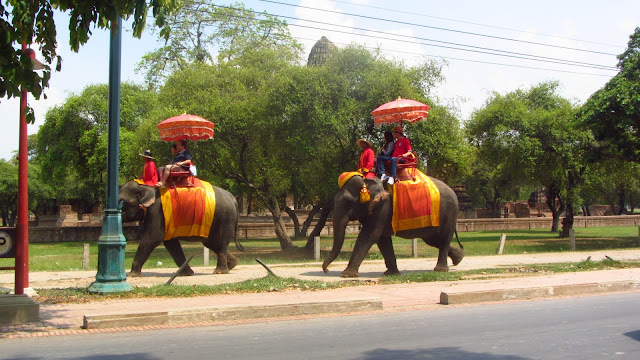 Following the stream to its source, we looked in over the gate at the Elephant Kraal. Here the mahout handlers were forcing the elephants to do tricks for the picture-snapping tourists. One elephant was forced to stand on his hind legs – an unnatural and painful act – he started trembling and defecating. One mahout tried to get a baby elephant to “dance”. When the adorable little baby wasn’t obeying, he chased it with his hook and delivered a heavy beating. The baby elephant’s shrieks rang in our ears. We were previously unsure if we wanted to volunteer at an elephant sanctuary in Northern Thailand. After watching the mistreatment at the Ayutthaya Elephant Kraal we had made up our minds and were ready to volunteer. 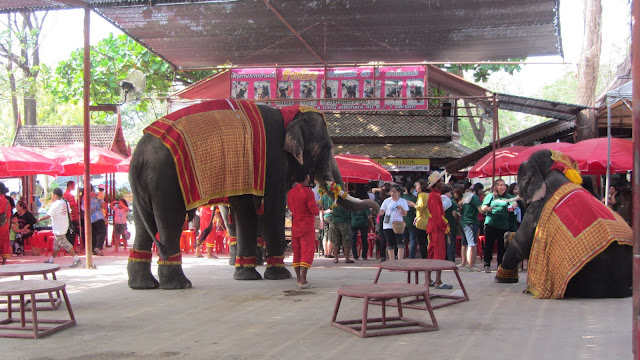 With our clothes already soaked through with sweat, we decided to press on a little farther to the Wat Lokayasutharam, home to a huge reclining Buddha. We were glad we decided to travel here, it was one of the most impressive sights of the day. 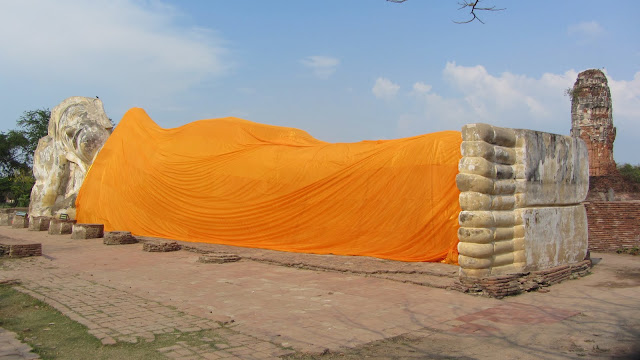 We booked another train ticket to travel north, though this time with a reserved seat in an air-conditioned railroad car. Next stop: Chiang Mai!