Often called the “forgotten country”, laid-back Laos appears quiet and peaceful at first glance, but a dark history hides just under the surface. Despite international agreements declaring its neutrality, Laos was deeply scarred by the war in neighboring Vietnam. In Laos, the U.S. waged what has been called “The Secret War”, arming hilltribes and mercenaries to fight the Pathet Lao communist forces (which were supported by the North Vietnamese). Meanwhile, the North Vietnamese constructed the Ho Chi Minh trail through Eastern Laos to supply Vietcong forces in South Vietnam. 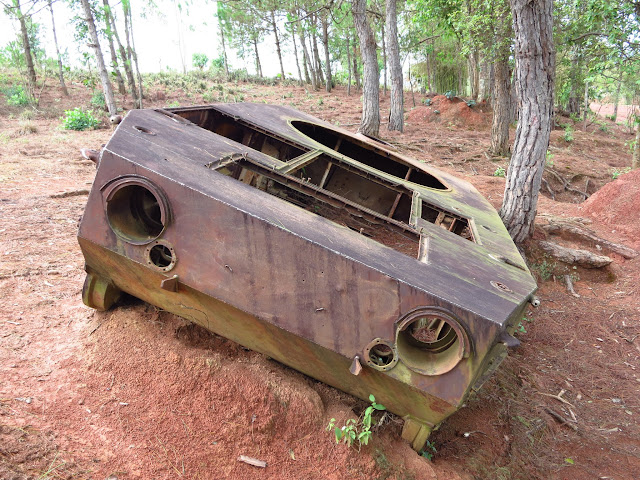 In return, the US conducted a jaw-dropping 580,000 bombing missions in Laos, attempting to cut off the Ho Chi Minh trail and attack Pathet Lao forces. And since Laos sat between US Air Force bases in Thailand and military targets in Vietnam, bombers returning from missions in Vietnam would often drop unused munitions in this part of Laos on the way back to base. This would happen quite often due to poor weather conditions or friendly troop movements too close to intended targets. In Vietnam, there were specific rules of engagement, but with the Secret War in Laos, there were no rules. 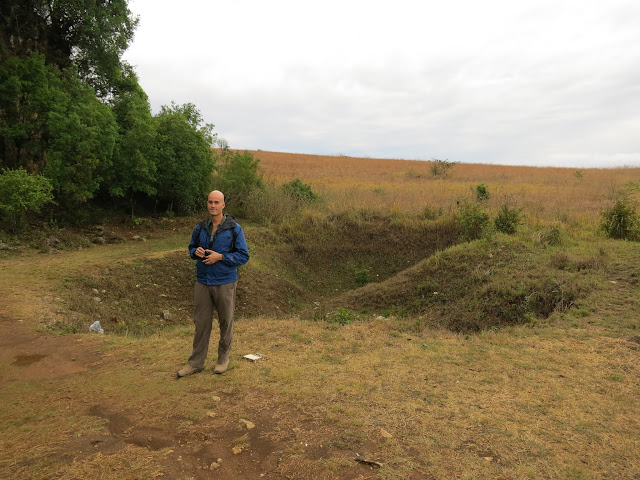 As a result, Laos now has the dubious distinction of being the most heavily bombed place on the face of the planet. More than 270 million bombs were dropped here, more than the Allies dropped during all of World War II – equivalent to a B-52’s worth of bombs dropped every 8 minutes for 9 years. It’s estimated that 30% of these bombs never detonated, leaving behind a deadly legacy of unexploded ordnance (UXO) that continues to kill and injure to this day. Cluster bombs, conventional bombs, landmines, rockets, missiles, and other munitions lie buried in the earth in unknown locations. They are routinely found in fields, under roads, and even under houses and schools. Despite ongoing efforts to clean up UXO in Laos, it’s estimated that approximately 80 million unexploded bombs still litter the country. 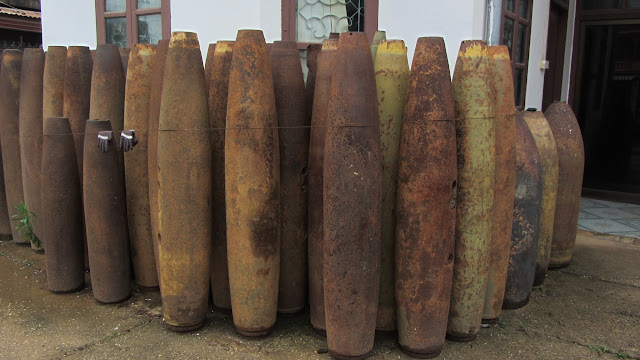 So, why would we want to visit a place like this? Well, in addition to learning about a hidden and tragic chapter of Laotian-American history, the area near Phonsavan in Eastern Laos is home to the mysterious “Plain of Jars”. These large stone pots, which look like gigantic jars, were placed here by a long lost civilization some 2,000 years ago. Nobody is really sure why they’re here – it’s possible they are burial urns, or to store grains or alcohol. Whatever the reason, thousands can now be seen at various sites in the Xieng Khouang valley around Phonsavan. 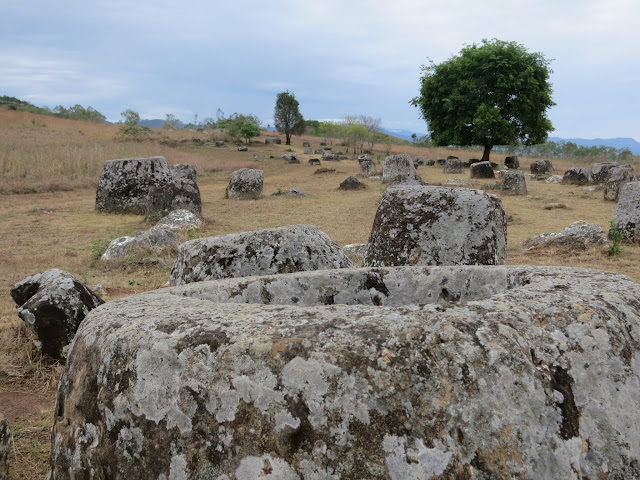 Sadly, many of these archaeologically significant sites were damaged by American bombs dropped during the Secret War, so not only is this the Plain of Jars, it’s also the Plain of Scars. Bomb craters pockmark the surrounding area, and many of the jars have cracked or crumbled as a result of the bombings. 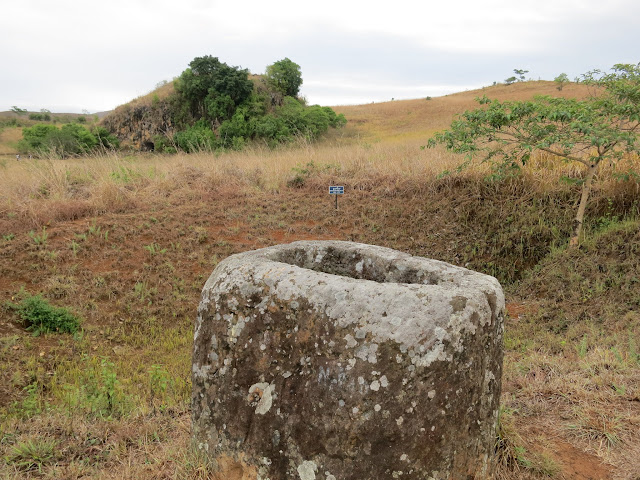 While walking through the jar sites, we had to mind our steps and walk in a narrowly-defined path. These paths are the only areas that have been cleared of UXO, so one step outside the lines might be your last! 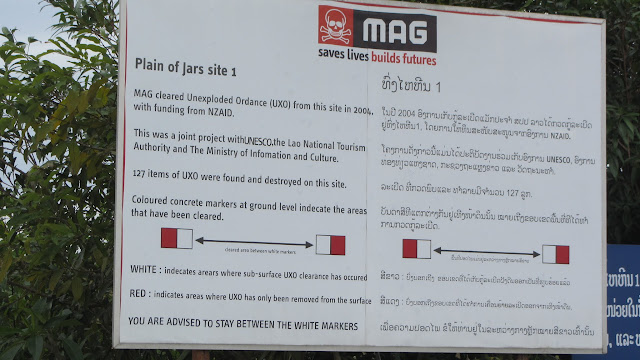 Near the first jar site, we peeked into a cave which was used during the Secret War. At that time, villagers lived in the caves, where they had homes, hospitals, schools, and everything else needed to survive. During the night time, a few farmers would go out to work the fields under the cover of darkness. 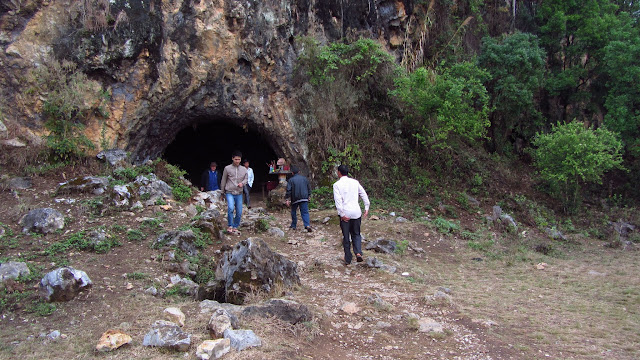 In a way, the war never ended for these people. Everyday someone takes a stroll through the jungle, starts a new construction project, or farms uncleared land, they are risking a run-in with a bomb dropped here forty years ago. 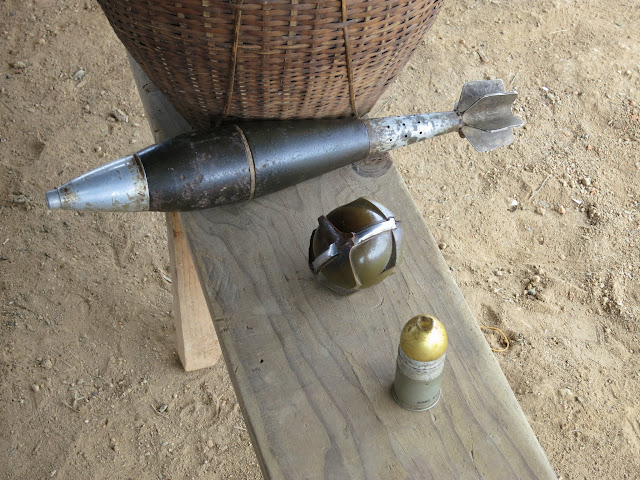 A couple different groups are working to clear the UXO, but the job will take decades. We stopped in at the office of the Mines Advisory Group (MAG), a British NGO which works to clear landmines and other unexploded ordnance around the world. They have been working in Laos since 1994, training local teams in each province to disarm these deadly remnants. 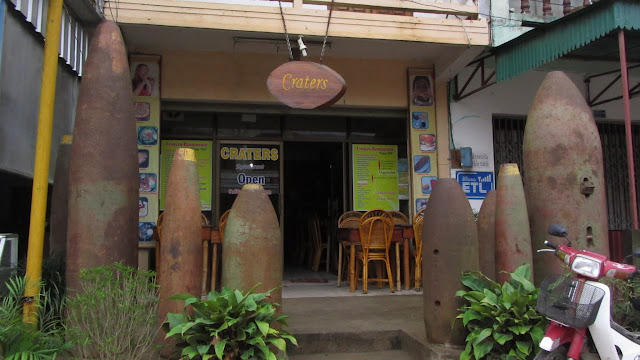 With so many bombs still littering the landscape, locals have started treating them as another valuable resource.

Sadly, MAG and other mine-clearing organizations are often in a race against the local people to find bombs. The locals sell the metal for scrap to Vietnamese traders. Since the local scrap collectors are untrained in proper bomb defusing techniques, accidents are all too common. Most bombs, after all, were not designed to be disarmed. 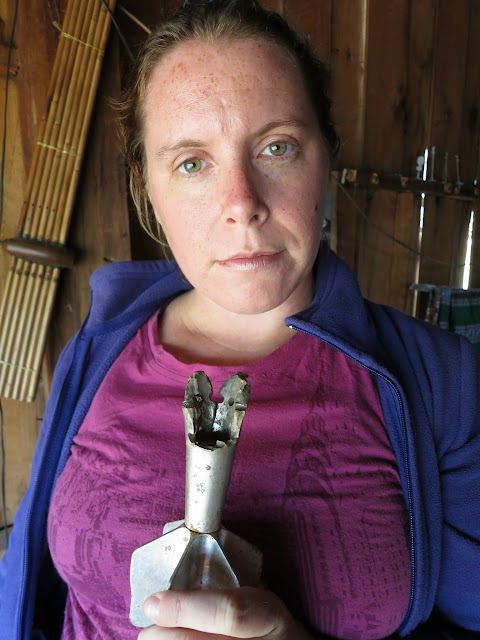 In addition to selling bombs to the scrap merchants, locals also repurpose bomb shells and casings in lots of useful applications. Villages can be seen with houses built on top of bomb shell casings. 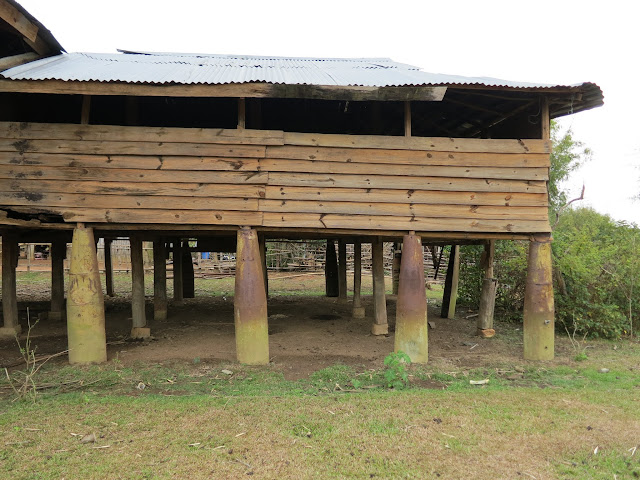 People also use the larger emptied bomb casing as barbecues, build fences out of them, or just use them for decoration. 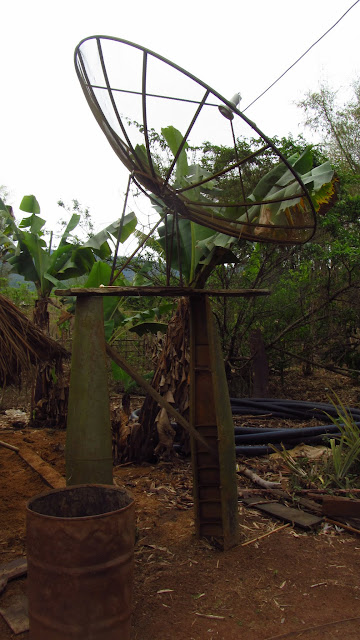 We also visited a local foundry, which melts down the scrap bomb metal and turns it into spoons. 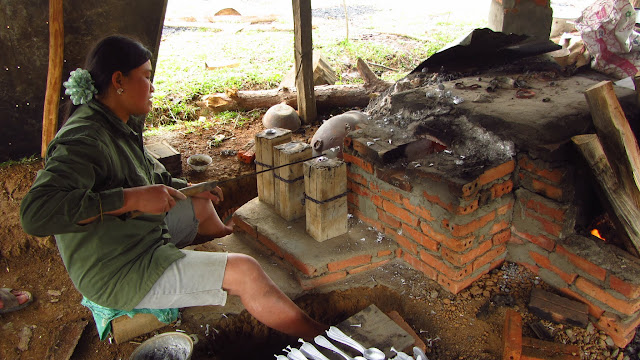 While very rudimentary, the spoons were actually pretty nice – we even ate lunch with a couple of them. 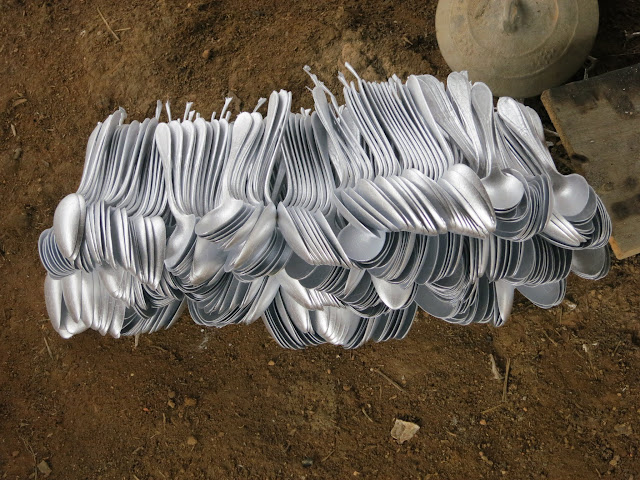 They also produced souvenirs shaped like a small bomb with “Stop War – Laos” etched on them. 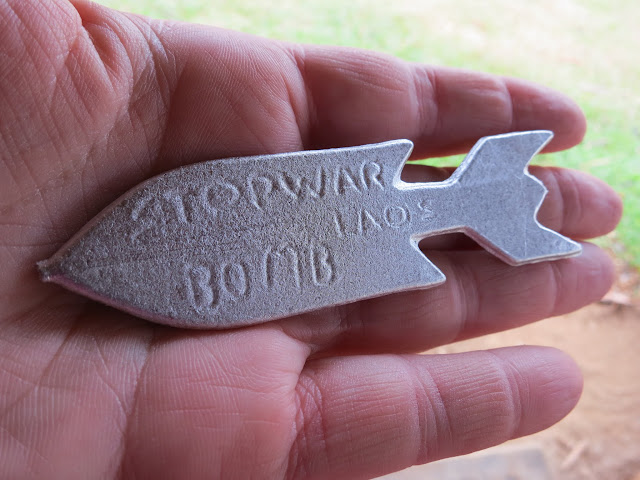 Most of the bombs dropped over Laos were cluster bombs – large bombs which broke apart before impact and released hundreds of small bomblets. Each bomblet sprays ball bearings in every direction when detonated. 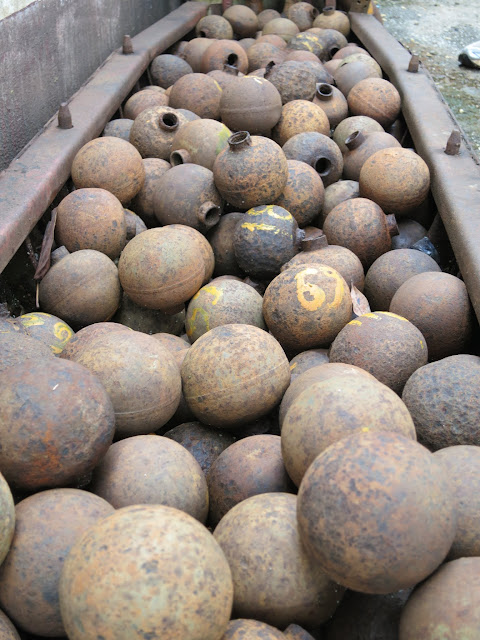 Unlike landmines, which are designed to maim, cluster bombs are anti-personnel devices designed to kill. Simply stepping on one of these can be enough to set it off.

Unfortunately, the bomblets also look like balls or toys, which encourages little kids to play with them. Some are even colored orange and look like a popular fruit. 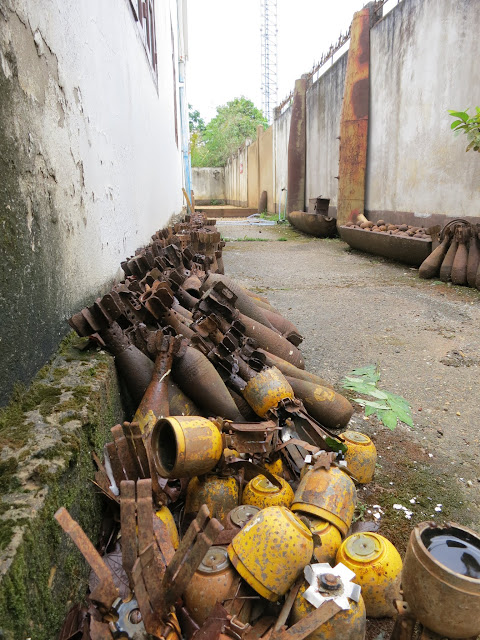 The Convention on Cluster Munitions, first created in 2008, has been signed by 111 countries that have pledged not to use, produce, stockpile, or transfer cluster bombs. The United States is not one of them.

Visiting Phonosavan was a difficult experience for us, and nowhere else have we ever been so embarrassed to admit that we come from America – the country responsible for so much senseless and terrible destruction here. While an ugly chapter in our shared history, more Americans should come to Laos to understand the awful reality of war and the persistent horror caused by cluster bombs and unexploded ordnance.