This trip has expanded our awareness and love for wild animals. We’ve walked among pythons and tarantulas, swam with turtles and sharks, sat with penguins and seals. But, one of our true animal loves has to be the humpback whale. These complex and beautiful creatures move with such grace and power and they are so complex that even the experts don’t fully understand their intelligence.

Even though we technically had about three months to make our way down the East Coast of Australia with our open-ended Greyhound bus passes, once we heard about the humpback whales at Hervey Bay, our plans immediately changed. Humpback whales migrate up and down both the East and West Coasts of Australia. We had seen some great humpback action on the West Coast in Freemantle. But, after further research, we found out that some of the most amazing humpback whale activity on this planet happens in Hervey Bay, Australia between July and November. We were travelling South along the East Coast towards Hervey Bay in the beginning of October. If we wanted to see the magnificent humpbacks there, we had to hurry. 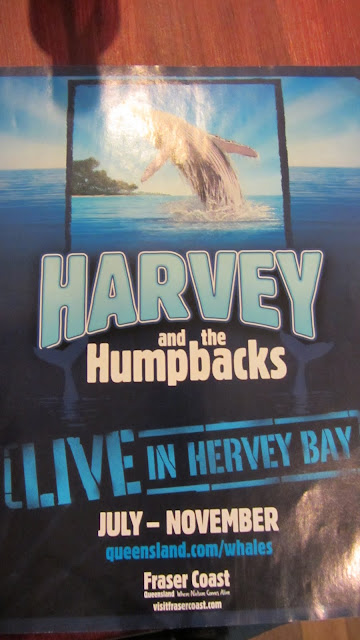 Around 3,000 humpback whales migrate during this time between Antarctica and the Great Barrier Reef. Humpbacks are still the third most endangered of all the large species of whales, but fortunately, their numbers are now increasing 13% each year. They are the fifth largest animal on this planet, and can grow up to 15 metres (45 feet) in length with a weight of up to 45,000kg (99,000lbs) – that’s the weight of 11 elephants! Humpbacks are the most acrobatic of all of the great whales. They are famous for showing off by leaping, rolling, tail and fin-slapping and even fully breaching (jumping out of the water completely) which provide fascinating “shows” for whale watchers. That’s no easy feat for such a gentle giant! Humpbacks are also well known for their complex underwater whale songs, which can last up to 45 minutes each for just one melody. We found it really interesting that the East Coast whales have an entirely different whale song than those on the West Coast! 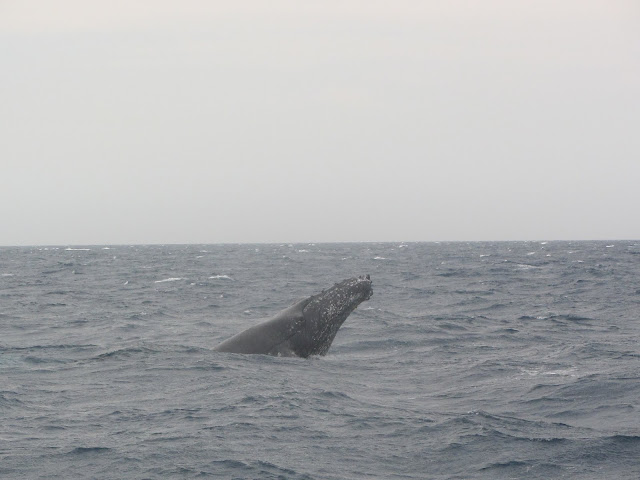 I asked this question often. The whales migrate north from the cold Antarctic waters to give birth and mate again. While migrating back south, the young calves are building up their fat layers so they can survive in the frigid Antarctic waters by drinking a huge amount of their mother’s milk each day. These whales often stop in the safety and shallows of Hervey Bay to teach their young “how to be a humpback,” so to speak. So, that’s why the humpbacks are so special there. They are not just passing through – they are there for a few days, and when a few thousand whales hang out for a few days each at a time, it’s a whale watcher’s (and whale tour operator’s!) dream. 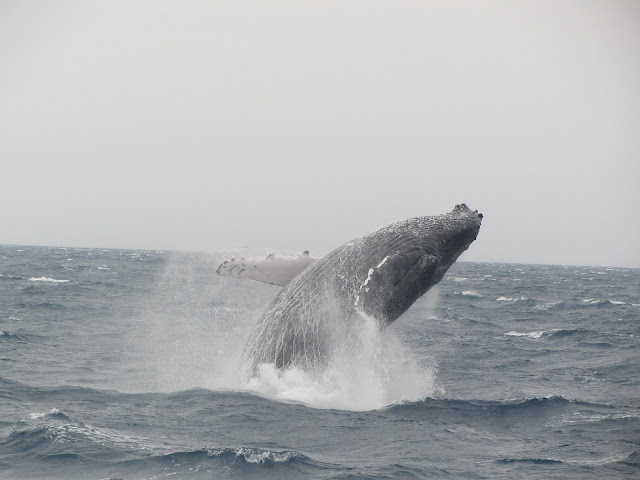 While rushing through some of the trip down through Queensland, I was busy keeping e-mail contact with a tour company we had read great reviews about. I tried to get up to date information – “are the whales still there? are they still active?” I would check their Facebook page for updates and photos. All looked ok, but with each day, more and more whales were leaving the Bay. 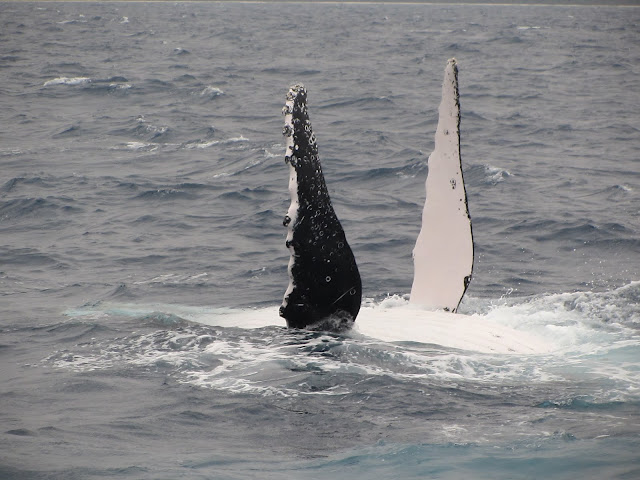 We arrived in Hervey Bay and had a great stay at the new and extremely well designed Flashpackers Hostel (highly recommended). Our trip was scheduled for the morning of October 15th and our fingers were crossed. We woke up that morning to a very windy, grey sky. Not ideal at all. 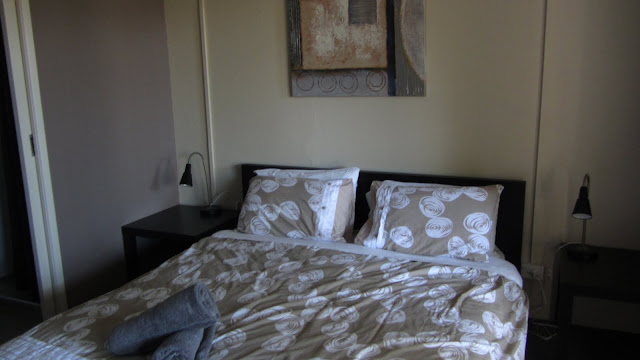 The company picked us up and we were on our way out to see the whales. The sea was a bit rough, but the staff reassured us that this weather often makes the whales more active, so we kept our fingers crossed. Some other people on board were getting quite seasick, but our reliable friend Dramamine kept us feeling fine despite the choppy seas. 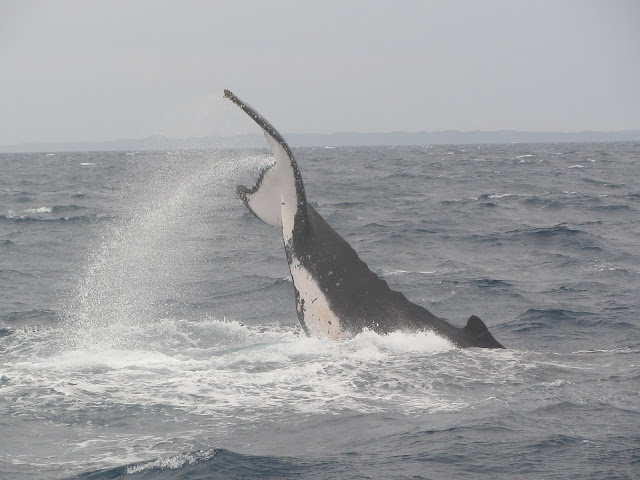 When we saw the whales, we knew why we had come. These creatures were so active and curious. They were swimming quite close to our boat and definitely communicating with each other. Our mother whale and her calf were accompanied by the mother’s escort male whale. The female was teaching the calf tricks and the male was showing off for her, so we got a fantastic display! The whales were fin slapping with their huge 5 meter fins just meters from our boat. All three at once and many times in succession. 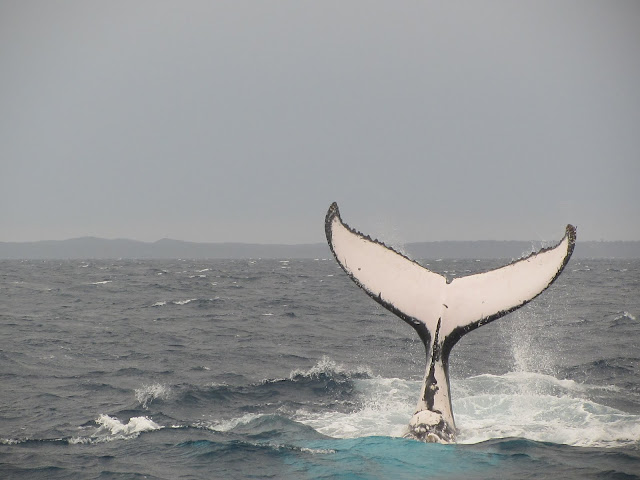 Then, the three began tail slapping, while keeping their bodies below water and slapping their tails in some other mode of communication. It was beyond mesmerizing. 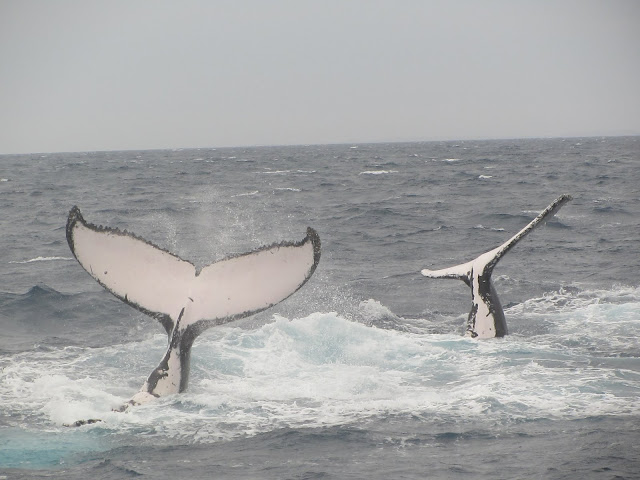 Words cannot describe how incredible this experience was. Then, all three began breaching out of the water, just off of our boat. Everyone was screaming and clapping and cheering. There are just really no words to encapsulate such raw power and beauty. 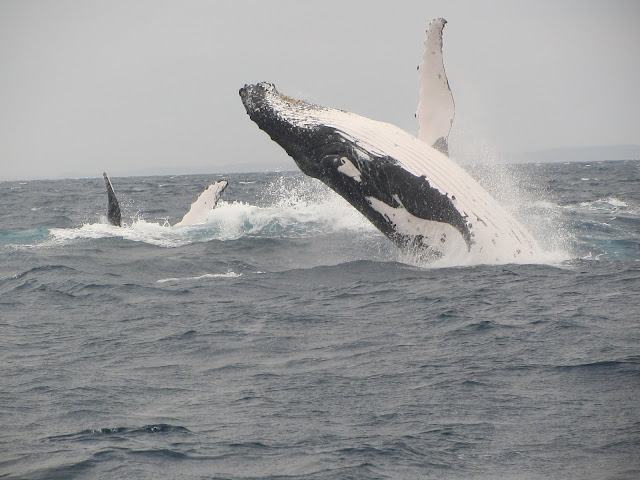 Those moments were some of the best of my life. I will never forget the special times we had with those whales. We counted ourselves extremely lucky to have been there that day. Even the staff who sees whales every day all season had their cameras out and smiled in disbelief. We stepped off the boat convinced that all of the rushing to get there in time for the whales had definitely been the right decision.

There is no doubt in my mind that these whales are some of the most intelligent, sensitive creatures on earth. I do hope that their population numbers continue to rise. Someday, I hope we can swim with these gentle giants. And I know for certain, I would love to return again one day to see the magnificent humpbacks in Hervey Bay.