Yogjakarta is the most popular tourist destination on the densely-populated island of Java. And for good reason. This small city is home to sites exemplifying Indonesia’s multicultural history, including Hindu and Buddhist temples, sultans’ palaces and playgrounds, and old colonial forts.

We left the congestion, noise, and pollution of Jakarta behind, departing on an early morning train to be able to enjoy the scenery during the 8-hour trip past rice paddies, small villages, and smoking volcanoes. 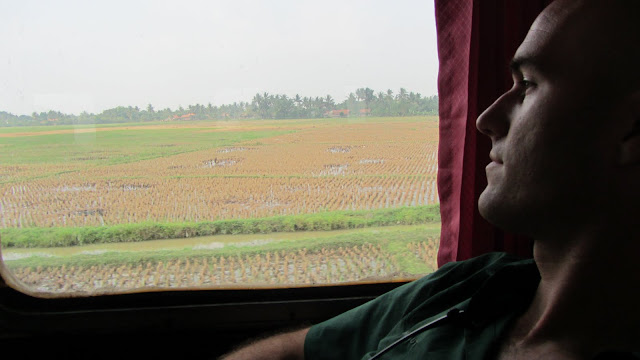 After finding our way out of the train station, we hunted for a room in one of the budget guesthouses lining the narrow alleyways off Malioboro Street. 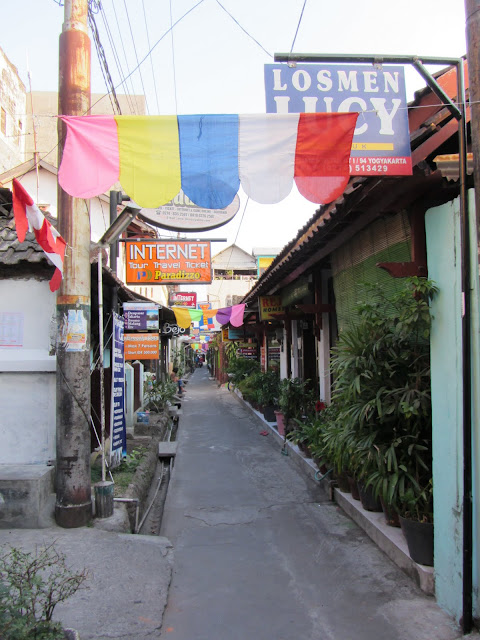 It was a little challenging – most places were full and it was already late in the day, but eventually we settled on the slightly more upscale Malioboro Palace Hotel, for around $31/night.

We stayed in Jogja the better part of a week, exploring the nearby historical sites, crowded city streets, colorful markets, and atmospheric restaurants. 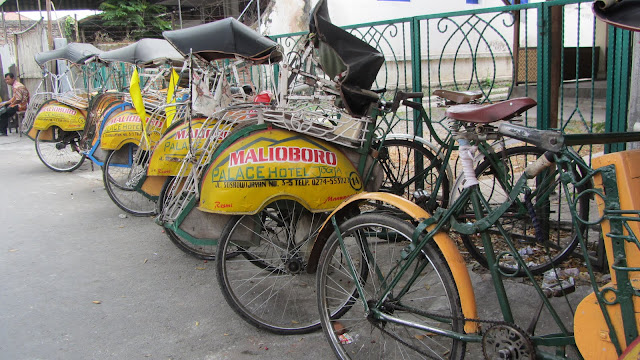 The highlight – and the reason most people bother to visit – was the nearby ancient temple complexes of Borobudur and Prambanan. We booked a “sunrise” tour to visit both sites, and were picked well before dawn in a stylish VW bus in order to beat the crowds and the heat, while enjoying a spectacular sunrise from the top of Borobudur. 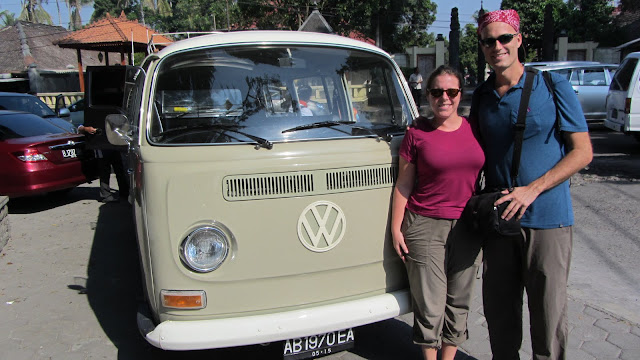 This Buddhist temple was built more than a thousand years ago, before the spread of Islam. The elaborate structure consists of thousands of carved statues and panels, situated around a three-level tiered temple. Amazingly, it was constructed entirely out of volcanic andesite stones, with no mortar used to join them together. 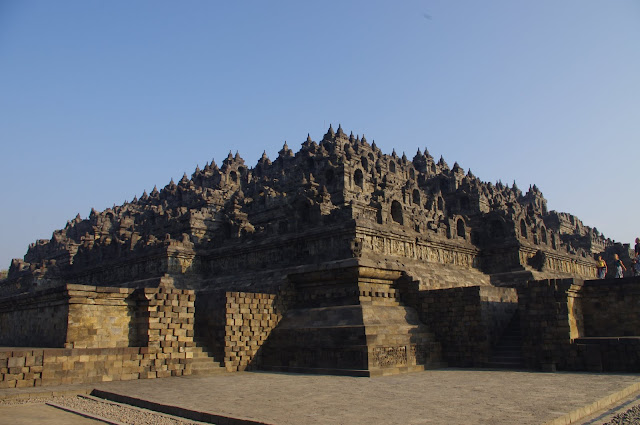 The temple was buried by volcanic eruptions and forgotten by the world until the 1800s, when Sir Thomas Raffles – the British Governor of Java – rediscovered the site. 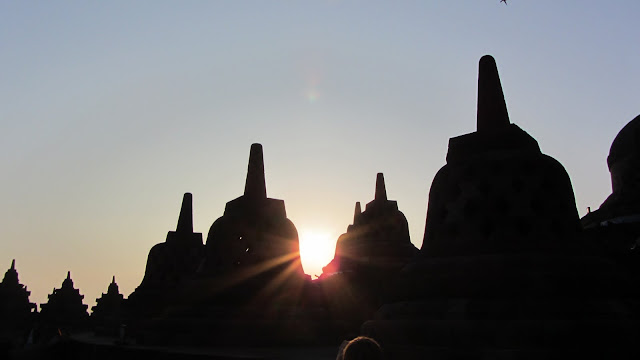 Since then, it’s been fully unearthed and restored. It’s still considered a holy Buddhist site, which attracts devoted pilgrims every year. In addition to the pilgrims, tourists flock here by the busload; Borobudor is the single most visited tourist attraction in Indonesia. 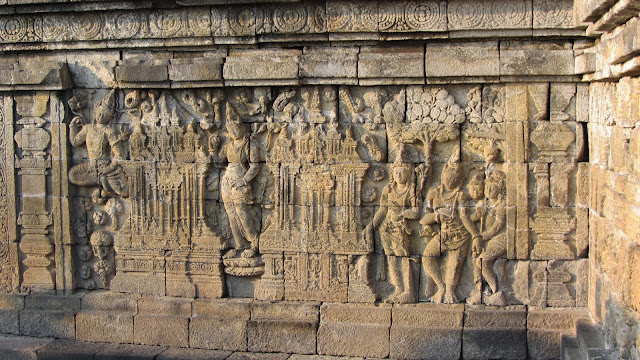 After watching the glorious sunrise and exploring the intricate details of this ancient wonder, we headed over to another temple complex. This time, the nearby Hindu site of Prambanan.

This enormous compound comprises hundreds of temples honoring the Hindu divinities, along with intricately carved panels depicting stories from the epic Ramayana. 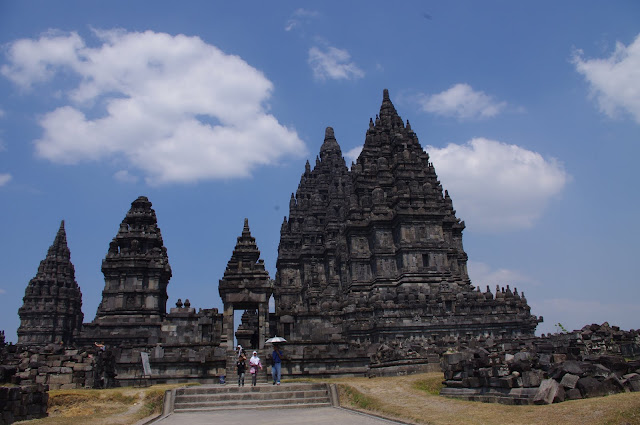 Sadly, Prambanan has not withstood Indonesia’s regular earthquakes as Borobudor. Many of the temples remain off access to the public, and significant restoration work continues on these World Heritage structures. 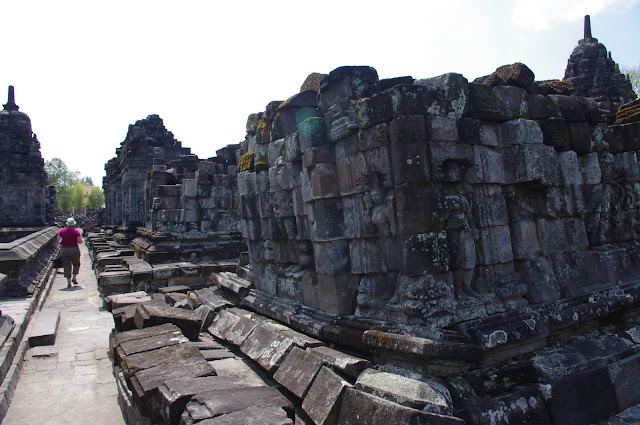 On our way to the temples, we passed the mighty Mount Merapi. This large volcano, which literally means fire mountain in Indonesian, is the most active in Indonesia. Over the years, it’s been responsible for a lot of damage and destruction. It most recently erupted in December, 2010, and was responsible for hundreds of deaths and the displacement of hundreds of thousands of people from nearby Yogjakarta. As we passed this menacing volcano looked fairly tranquil, letting out only a steady stream of smoke from its crater. 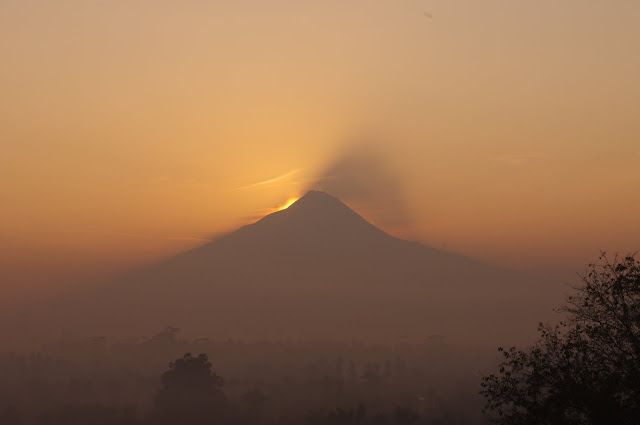 Yogja is not only a city, it is also part of a regional kingdom, complete with a sultan and palace complex. After fighting off the becak (bicycle rickshaw) drivers and making our way on foot to the palace, we bought a ticket to visit the kraton (palace). Or, at least, we thought we were buying a ticket for the palace. We were a little confused as to why the entry price didn’t match the one we thought it would be. After an all-too-quick guided tour through some beat up old buildings (surely a sultan wouldn’t live here?), past a few scary-looking mannequins, and being shown a few photos, the guide shook us down for a tip and tried to get us to follow a “friend” to buy some batiks (traditional printed fabrics). 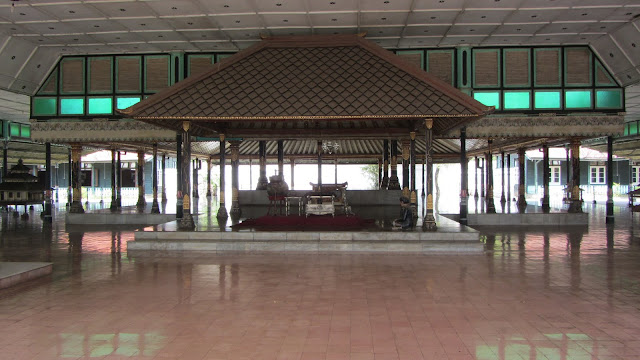 We then found out we had got snookered into the “fake” palace, with the real one just around the corner. We ended up buying tickets for the real palace, but with it already being late in the day, only had a short time to look around. 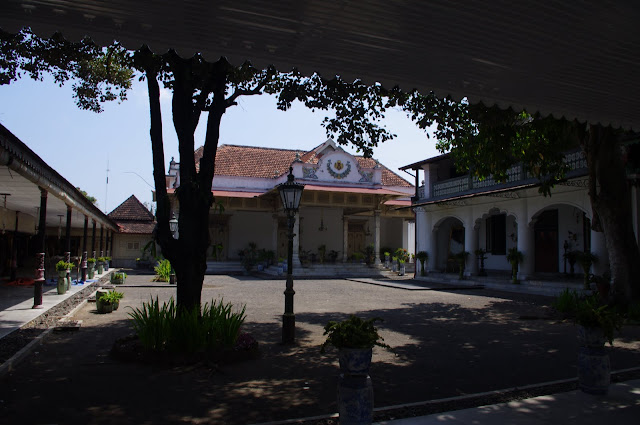 In addition to the modern day palace (fake and real), it’s also possible to visit the Taman Sari Water Castle. This series of underground canals, pools, and small buildings was used by previous sultans. Here, they would travel from the main palace complex using boats through the secret underground canals. 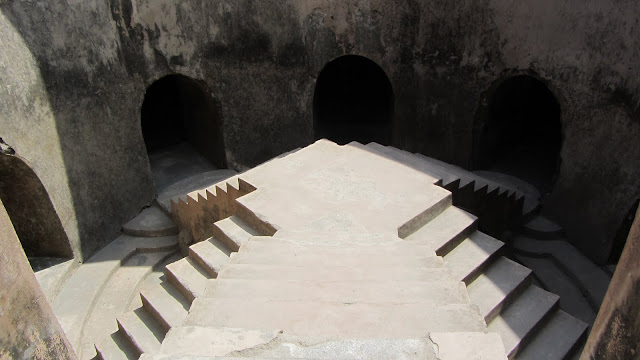 Using special viewing towers, the sultan would observe women bathing in the pools and invite them in to his inner pool. You can guess what would happen there. 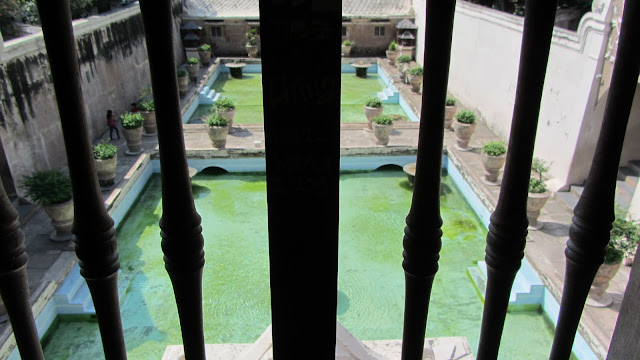 Since the sultans abandoned this sinful complex, squatters have moved in and a small village covers the historical site. A friendly local showed us around. Unfortunately, plans are in place to evacuate these villagers to restore the complex and offer more tourist facilities.

Having exhausted the sights around Yogjakarta after a few, we headed to the train station and bought a ticket to Surabaya, ready to explore a few more of Java’s attractions.

4 thoughts on “The Heart of Central Java – Yogjakarta, Indonesia”