Visiting Antarctica was always a dream Heather and I both had, but something we never actually thought we would be doing. Luckily, we found ourselves at the right place and the right time when we arrived in Ushuaia, Argentina in early March. Ushuaia is the main point of departure for Antarctic cruises which run during the summer months (November-March) and last-minute deals can usually be found on the final trips of the season, before the fierce winter takes hold.

After checking with some local travel agents, we discovered that there were a few ships with space still left – all costing about the same amount. We opted to pass up two of the ships leaving within a couple days and wait 9 days for the MV Plancius, which was offering a 2-for-1 special to last-minute bookings. Our travel agent assured us this was an excellent ship, with a fantastic expedition leader and staff.

Travelling in the world’s most remote, uninhabited wilderness is a serious undertaking and we wanted to be sure we would be on a sturdy ship with an experienced crew. Recent incidents such as the 2007 sinking of Gap Expedition’s MS Explorer have brought increased attention to the safety of these cruises. As a result, authorities have introduced stricter requirements, restricting the types of ships that can operate here – it’s estimated that 25% fewer tourists will be able to visit Antarctica next season alone.

Most expedition ships are converted scientific vessels, with ice-strengthened hulls necessary to ply the frigid waters surrounding the continent. Our ship, the Plancius, was a research vessel in use with the Dutch Navy, which was bought by Oceanwide Expeditions a few years ago and refurbished for use in Polar sightseeing cruises. After seeing her docked next to Ushuaia’s pier the morning of our departure, we immediately felt like we had made the right choice. 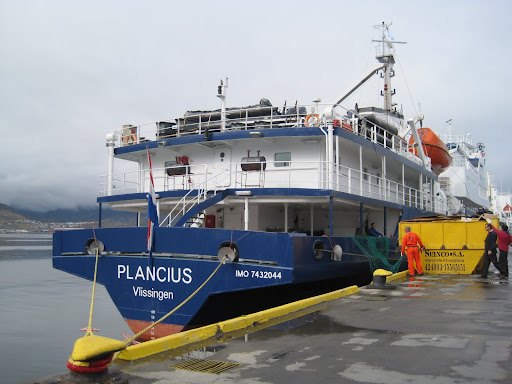 Later that day, we marched down to the pier with all of our baggage and boarded the ship. We had been warned that the ship is “not luxurious” and were prepared for something very basic. Our expectations were easily exceeded when we explored the Plancius, finding it attractively decorated, while remaining comfortable and functional. 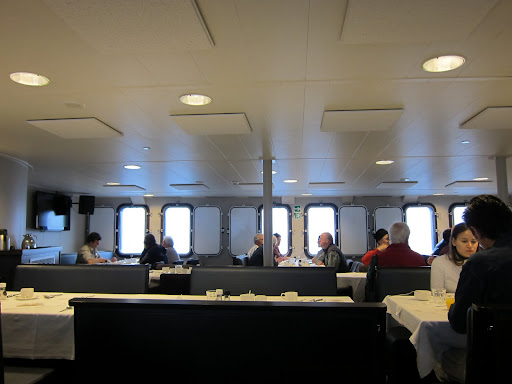 Our twin-bed cabin came equipped with a large window (we were very lucky, since some rooms only had a small porthole), desk, flat-panel TV, and bathroom. Everything appeared new and spotless, since the expedition-ship conversion was completed in 2009. 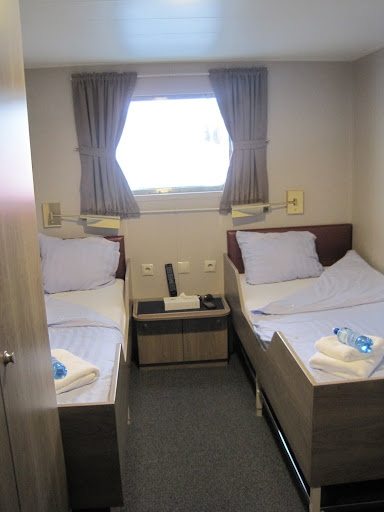 In the lounge, we were introduced to the international expedition team – led by Rinie van Meurs from The Netherlands, and assisted by five other Antarctic experts, with specializations in glaciology, marine mammals, sea birds, and ocean environments. The captain – a tall, large Russian man, with years of experience in polar regions – took the microphone and introduced himself, warning us in broken English that “come good weather, come bad weather.” We were later told Russian sailors are very superstitious and shy away from discussing the weather – it’s bad luck. We also learned the captain had kept a head of garlic on the bridge desk to keep the bad weather at bay. Of course, we all hoped the weather would hold for our long trip to the continent and back. 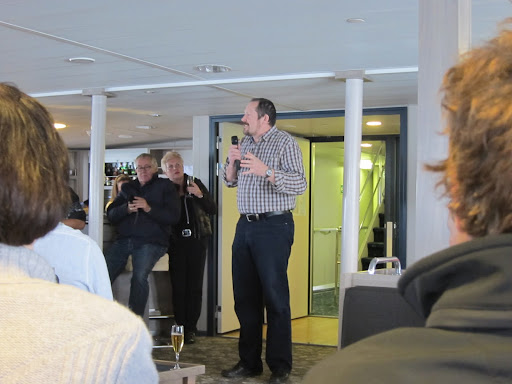 Ushuaia is 1,000km from the Antarctic Peninsula, with the infamous Drake Passage separating the two. These seas are supposed to be the roughest in the world, where strong winds and massive storms endlessly circle the Southern Ocean, unimpeded by land at these far southerly latitudes. Many travelers to Antarctica have harrowing tales of their ships tilting 40-degrees side to side or the bow thrusting skyward over the tops of 40 ft waves before crashing down over them. Needless to say, we were a little concerned about this part of the voyage, which would occupy the first 2 ½ days. 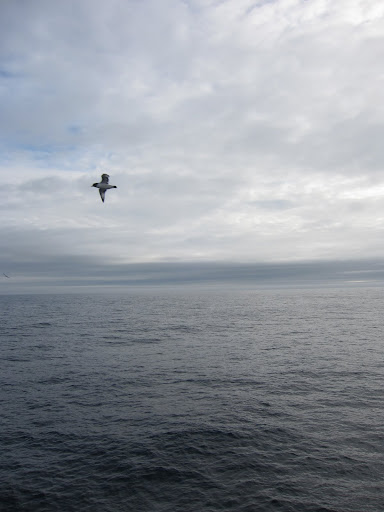 We were advised by the ship’s doctor to take sea-sickness medication after dinner the first night, but as a precaution, we took our pills right away. The water was still calm and flat as we lifted anchor and sailed through the protected Beagle Channel, but we knew it could get rocky quickly.

A safety drill interrupted our unpacking, and we gathered at the muster station wearing our lifejackets. From there, we were taken to a large, enclosed lifeboat, where one of the ship’s officers explained the evacuation procedures and gave us the opportunity to ask questions. Once again, we were impressed by the safety equipment and preparedness of the crew. 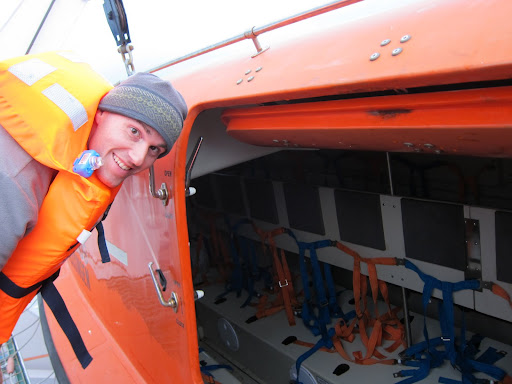 We enjoyed a delicious dinner, getting the opportunity to meet some of our 94 fellow passengers. Unlike our cruise in the Galapagos, a surprising number of backpackers and younger travelers were on-board, many of which had taken advantage of the last-minute offer.

As dessert was introduced, the ship gently started rocking side to side. We headed back to our cabin, anxious about what lay ahead as we continued past the famous southern latitudes of the “Furious Fifties” and the “Screaming Sixties”. 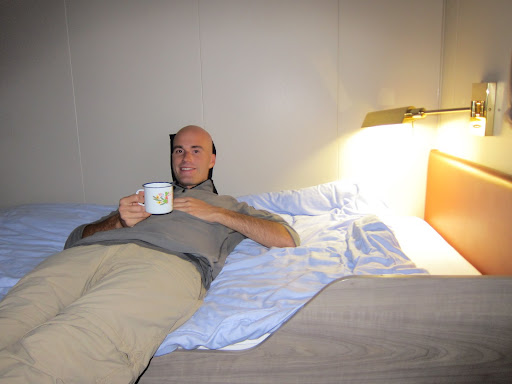 The next morning, we were surprised to find very light winds and a small swell, which was hitting us across the beam, resulting in a gentle, slow rocking motion. So far, so good! The staff advised us that these conditions were very rare, and this was the 1 in a 100 calm “Drake Lake” everyone dreams about. That said, we still took plenty of sea-sickness medication, just in case.

Throughout the day, lectures were given on Antarctic weather and the convergence zone. Climate change seemed to be a hot-button issue that the expedition team tried to avoid, though some lecture attendees pushed for answers. We were assured there would be more detailed talks on the subject later on. 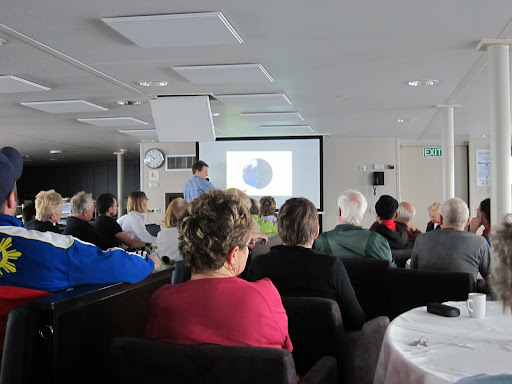 Time passed surprisingly quickly, between the lectures and the near-constant meals. We retired to our cabin early to watch a couple of documentaries we had downloaded about Antarctic wildlife and famous explorers.

The next day, we defied odds again, encountering more of the calm conditions we had enjoyed the day before on the “Drake Lake”. That morning, it was announced that we had crossed the 60th Parallel, meaning we were now officially in Antarctic waters! 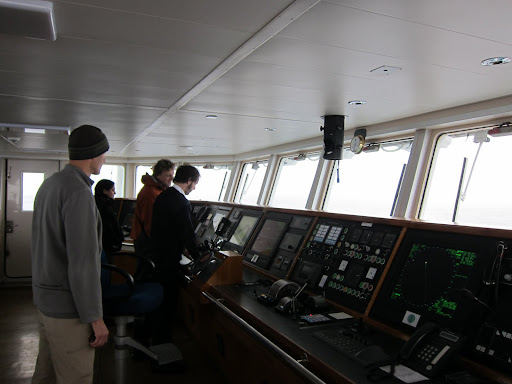 Lectures on penguins and sea birds kept us entertained, and in the afternoon a couple of fin whales were spotted. Our first Antarctic wildlife encounter! We visited the bridge later in the day, when land was first spotted – the South Shetland Islands, where we would be making our first landings on the third day.

5 thoughts on “The Drake Passage – Aboard the MV Plancius”