After 3 days stuck in a jeep exploring the magnificent landscapes of Southwestern Bolivia, we were excited to finally make it to the Salar de Uyuni – the largest salt flats in the world.

The night before, we caught our first sight of this amazing natural wonder as we made our way to our final night’s accommodations, which were located on the edge of the salt flats. We were put up in a hostel that was made entirely of salt – walls, floor, tables, and even the lamps were all large salt blocks. 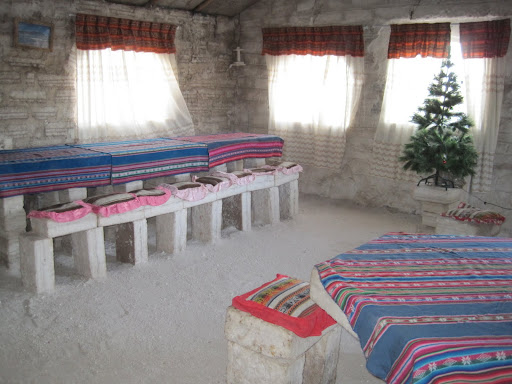 Despite the unusual choice of building material, we had our best night’s sleep of the entire tour in the salt hostel. It turns out salt is a good heat and sound insulator, so that night was both warm and silent. 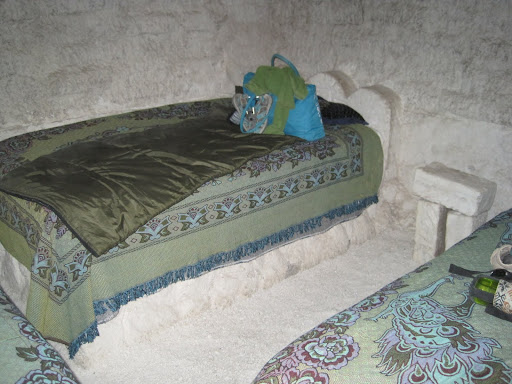 The next morning we were up early, once again, in order to see the sun rise over the salt flats. We climbed into the jeep and sped across the flats stopping after we had a reached a point where every direction was completely the same – blindingly white and, of course, completely flat. 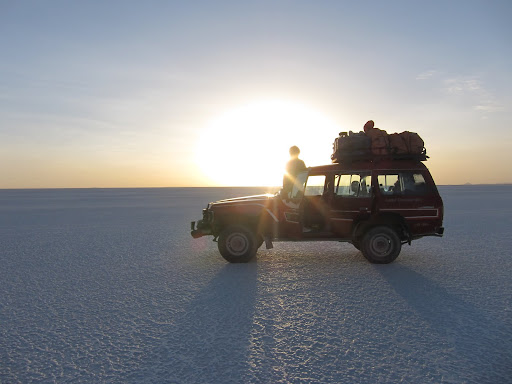 The sun rise was brilliant, beginning with a small dot of light far off on the horizon, and growing into a huge ball of orange that enveloped the sky. 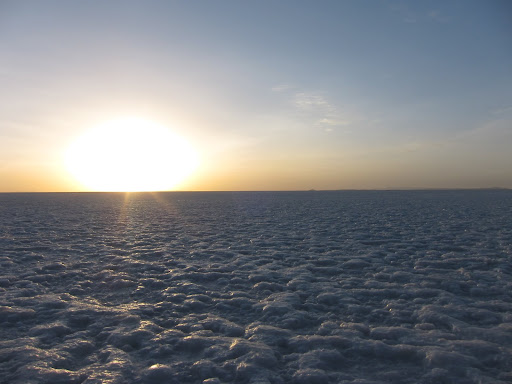 Breakfast was at Isla Incahuasi, an “island” which is actually the remnants of an old submerged volcano. 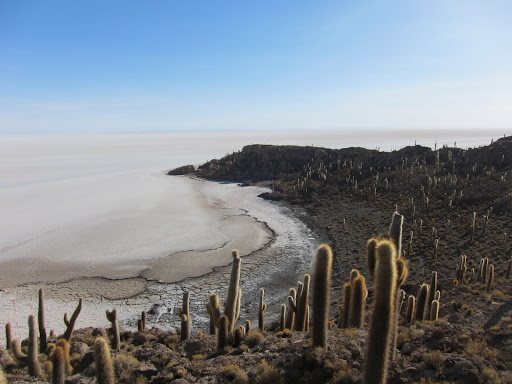 Here, our guide explained the history and formation of the Salar de Uyuni. Tens of thousands of years ago, the area was actually a large saline lake. Over time, this dried up, leaving the remaining salt desert and islands.

The Isla Incahuasi island was covered in cacti and coral-like structures. We climbed to the top of the hill in the middle of the island to enjoy a stunning view of the surrounding salt flats. 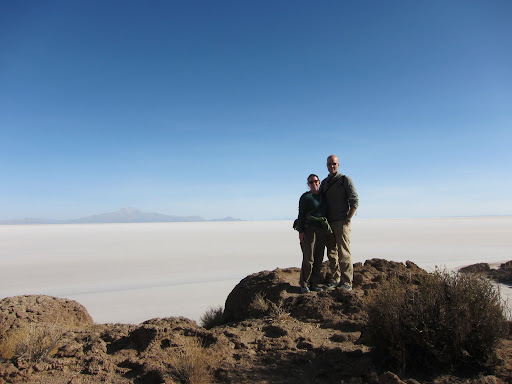 After the island, we were driven out to the middle flats, where absolutely nothing but endless white can be seen in all directions. 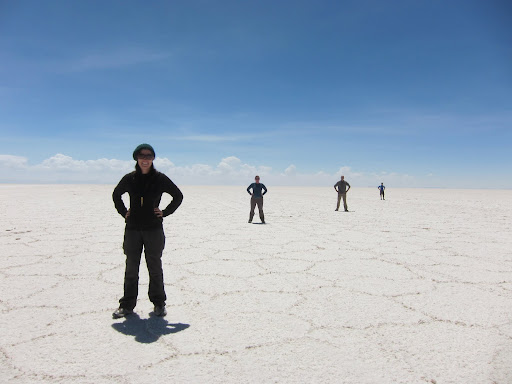 The complete lack of anything to focus on makes for some interesting visual illusions and entertaining photos. 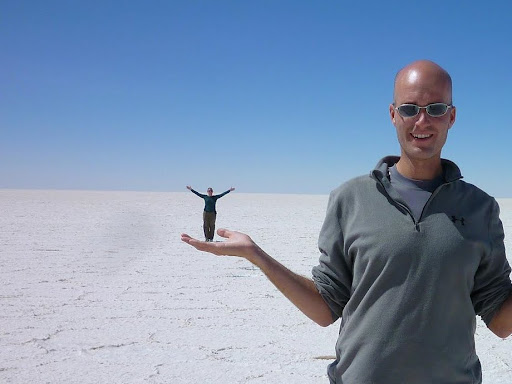 Cameras essentially lose all sense of depth, and can focus on near and far objects at the same time. 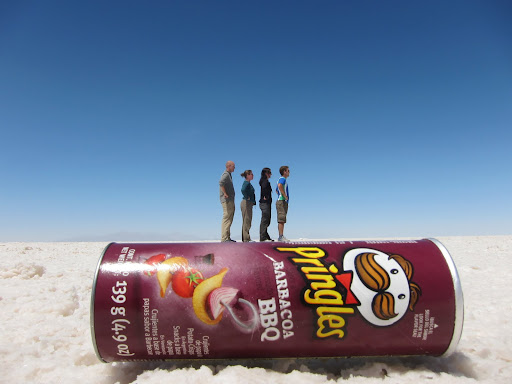 We played around with different angles, perspectives, and props. 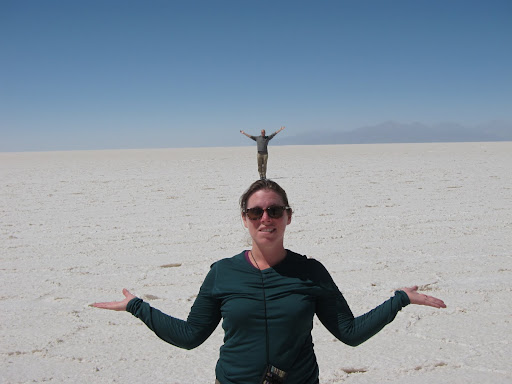 Our favorite photo makes it appear as if Heather is eating me with a spoon. In actuality, I’m sitting about 30 ft in the distance; Heather is close to the camera, and we all worked closely together to line up the resulting shot. 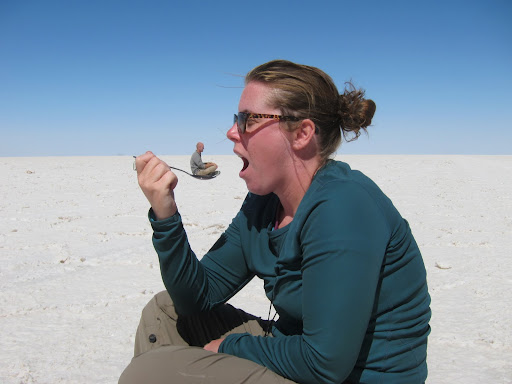 At the edge of the salt flats, we were shown an area where salt is harvested. It is first pushed into big piles to dry, before being sent to a number of nearby factories, where it is dried, bagged, and shipped around the country. Nearly 25,000 tons of salt is mined here each year. 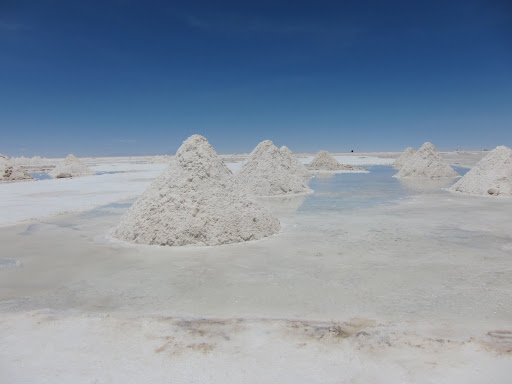 In addition to regular table salt, the salt flats contain about 50% of the world’s lithium reserves. Plans are underway to begin extracting this valuable mineral, which is an important component of modern day batteries.

We ended the tour in the town of Uyuni, but before it was completely over we had one final stop – the train cemetery. 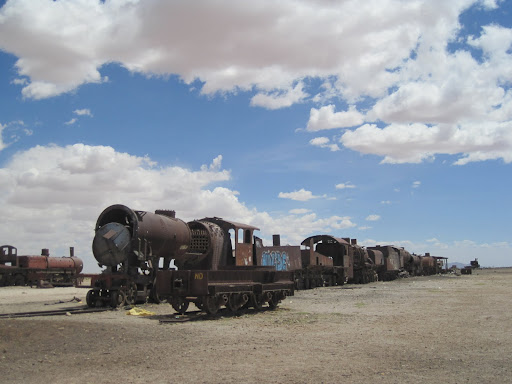 Here, massive old locomotives have been left to rust away their final days in the Bolivian desert. These trains all looked quite old, with large steam boilers, however steam engines were used in Bolivia through the 1970s so it’s hard to tell their exact age. 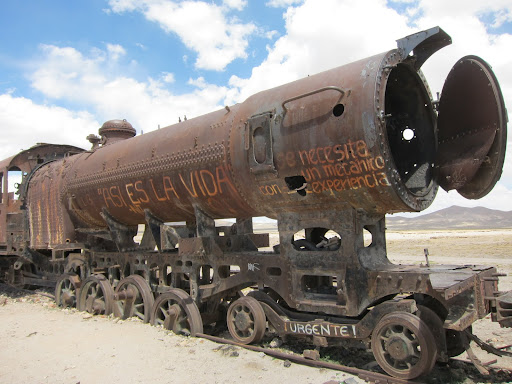 The trains made for some excellent photo opportunities. 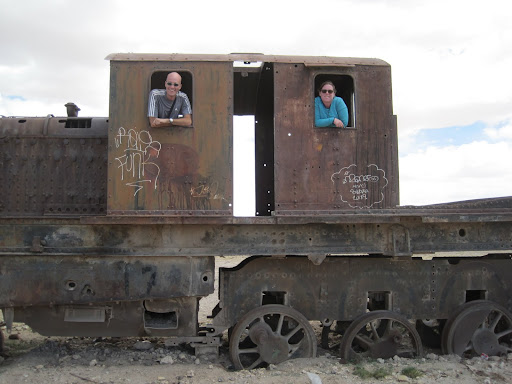 After 4 days, hundreds of miles, and countless hours in the bumpy jeep, our tour of the Uyuni Salt Flats and Southwestern Bolivia had come to a close. Our trip through this remote, barren environment was completely unforgettable, and one of the major highlights of our time in both Bolivia and South America.