We decided to continue island hopping along Thailand’s east coast and caught a ferry to Koh Samui. Erik visited this island 8 years ago and was surprised to see how built up it has become with 5-star beachfront resorts, upscale restaurants and bar after bar geared towards the almighty Tourist.

Erik managed to snag us a sweet deal at First House Samui, which was probably our best ever value for beachfront accommodation. As we arrived, we were welcomed with a cold refreshing drink, which we welcomed gladly since it was so hot out! The place has a nice pool, open restaurant area, free WiFi, flatscreen TV, access to free lounge chairs and umbrellas on a quieter section of the beach (hardly a tout to be seen!) and somehow we even got vouchers for the huge buffet breakfast, including eggs made to order – Yum! Cost of room per night – just $30. 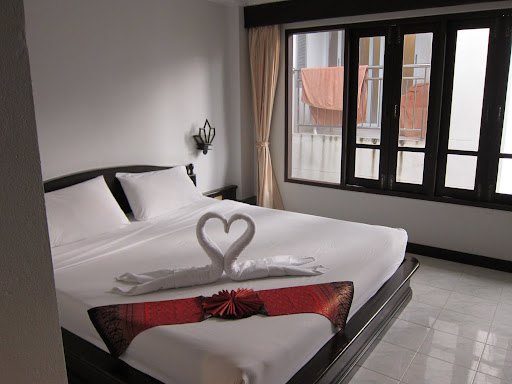 As a bonus, a fountain on the hotel grounds contained the famous Asian “spa fish.” When you place your hand or foot in the water, these fish eat off the dead skin, which while it tickles, does not hurt and leaves your skin feeling nice and soft. Free fish spa treatment! 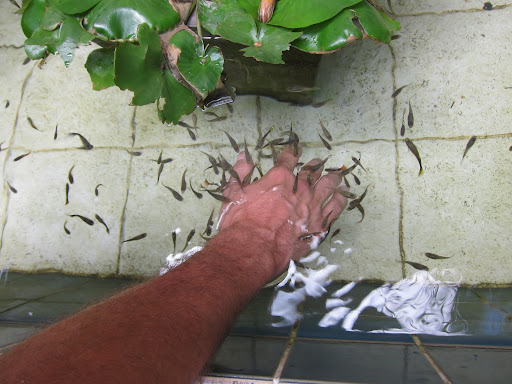 Our first night in town as we strolled down the main drag, Erik was sucked in to a deal at an Indian restaurant that we had, in fact, read good reviews about, so we decided to give it a try. It turned out to be the best Indian food I’ve had on the trip so far, and, unlike Erik, I’m not even a huge fan of Indian food! So that’s saying a lot. The spectacular dinner deal was this: garlic naan, onion naan, vegetable samosas, vegetable korma, chicken tikka masala, mushroom rice, pilau rice and they even throw in 2 cold beers all for the low price of just $16.50!

After dinner, we continued along the main strip and found ourselves at the very cool beach bar – Ark Bar. Think lounge chairs, tables, and cheap cold beers beachside. 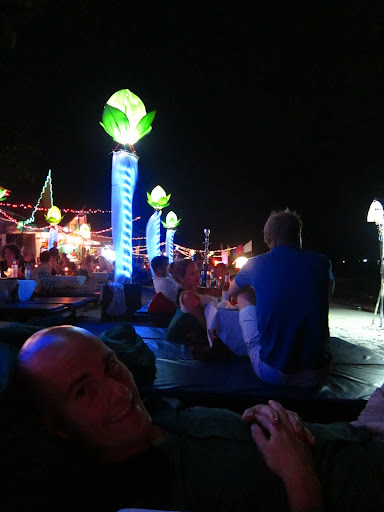 In Thailand, there is a neat custom of lighting a paper lantern, writing a wish on it and releasing it into the night sky. It was special to see lanterns being released as we sat enjoying the cool night ambiance. 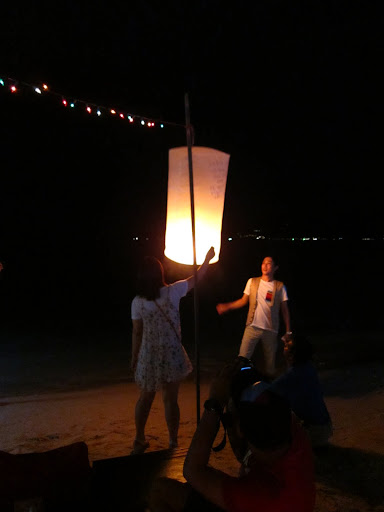 We decided to rent a motorbike from our hotel and explore the island. Somehow, I got sucked into the idea of us trying out a strange and unique sport – football golf (soccer for us Americans)! On the island of Koh Samui, we found this crazy golf course where you kick around a soccer ball and try to make it into the hole. Very strange, and much harder than it looks, especially since we are both terrible at soccer. But, it made for a fun afternoon. 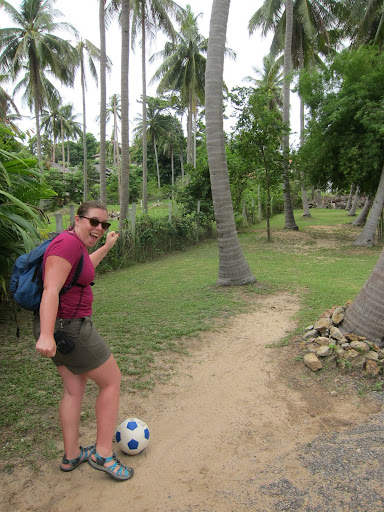 We continued on to some interesting Buddhist temples where I managed to get a cool photo of me tickling a very large foot. 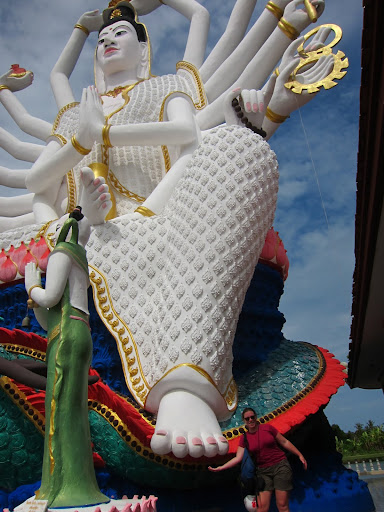 We also made a stop to see the Mummified Monk. This legendary monk is very well worshipped as we saw several people praying and reflecting at his feet. 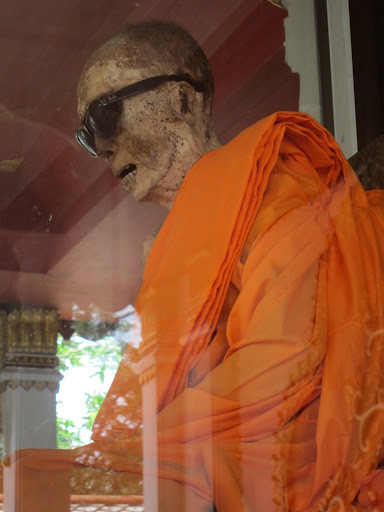 My favorite stops of the day were to the two beautiful Namuang waterfalls. With our trusty motorbike, we found our way to the first waterfall – we had to walk through a theme park type set-up to get there. This place claims to be an animal safari park. We’ve been so excited about seeing elephants in Thailand and were looking forward to visiting them. But after some research, Erik found out that the elephants are not treated very well there. Tourists take rides on them and they are treated badly. We walked past one beautiful elephant and got a chance to walk right up to him. He was gorgeous, but we could see the sadness in his eyes. 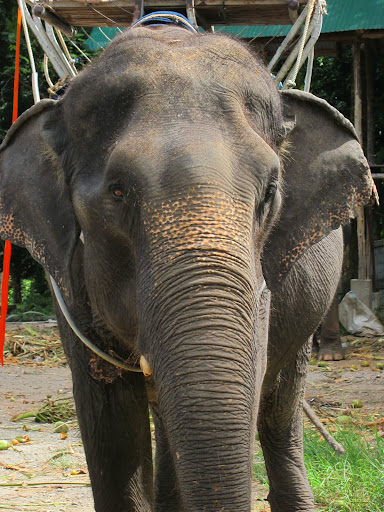 We also found out that these elephants are not even native to Koh Samui. They are there purely to make money off of tourists. The elephants presence is causing detrimental effects on the island. Their feces attracts a new species of beetle that is killing all of the native palm trees that have been there for years. If you go to Thailand, please consider the impact these “elephant treks” are having on these beautiful, intelligent, endangered animals and the environment around them. 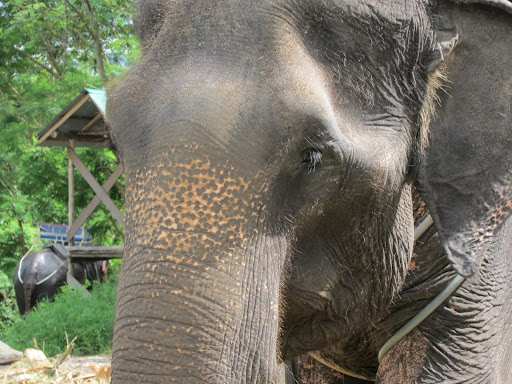 It was tough to find, but we finally made our way to the second waterfall of the day. This one was even taller and more beautiful than the first and it felt wonderful to swim in the crisp cold water on such a hot day. 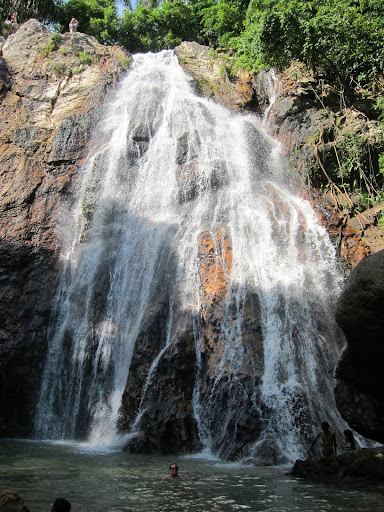 Before heading back on the bike, we had heard about some legendary barbequed chicken that we knew we just had to try. As self-proclaimed foodies, we had to check out this chicken we’d heard and read so much about. On the path to the waterfall, we saw a huge poster displaying an article raving about the chicken from Khun Jai’s little food stand. His smile, just like in the photo, welcomed us in and he sat us at a nice table under the trees. As he recommended, we ordered the chicken – that’s what we came for. This was not just any old BBQ chicken. This chicken was tender and the delicious blend of secret spices was out of this world! A true legend. 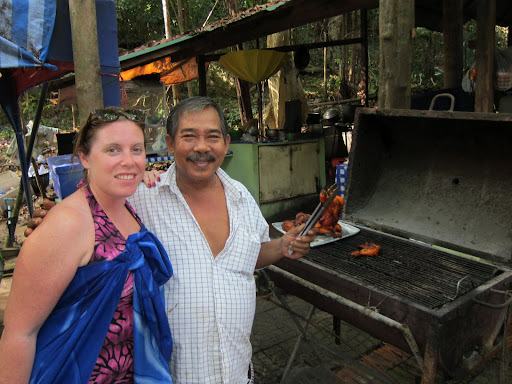 Another day on the bike took us to the famous Grandpa/Grandma rocks. These natural rock formations called Hin Ta and Hin Yai look, respectively, like male and female genitalia. It’s strange, but true. Local legend has it that two young lovers had left shore in a small boat, got caught in a bad storm and were lost at sea. Their spirits were transformed into the rocks that stand today. It’s bizarre how much they really do resemble their names and that they are so close together. 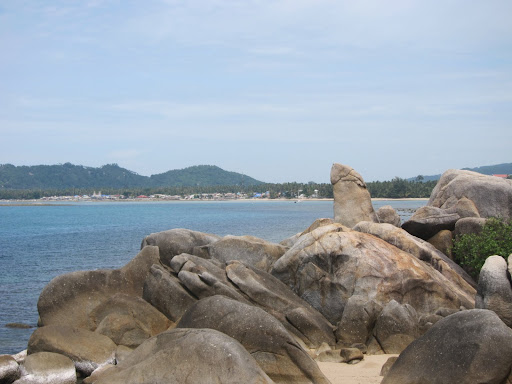 Very interesting. The female rock was a bit difficult to find, but once we did, we knew we’d found it. We had to walk very carefully as the rocks are sloped and slippery. Just two weeks prior, a tourist slipped, fell and hit his head and drown in that exact spot. 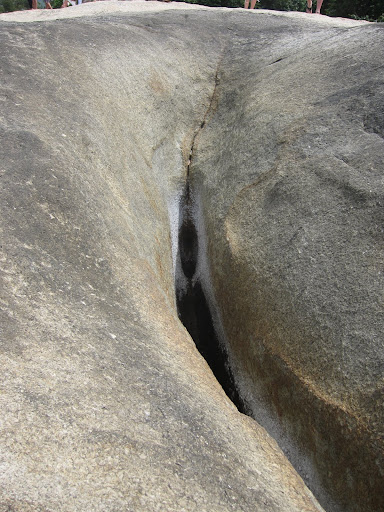 While near the rocks that have surprisingly become a huge tourist attraction, we bought the local sweet coconut candy. A sweet natural coconut syrup is folded into these triangles and wrapped in plastic – very yummy!

For our final day on Koh Samui, we booked a boat trip to Angthong National Park, a string of islands known to be quite beautiful and well worth a trip. The trip is very popular with tourists and we’d heard horror stories about overcrowded speedboats, but ours was just fine. The islands reminded us a bit of the Galapagos Islands of Ecuador, but without the incredible wildlife. We did some decent snorkeling, saw the impressive green lake Mae Koh from a high lookout point, and kayaked around the famous James bond rock, that was in one of the films. It was quite impressive as it jutted out of the sea and is supported by a very thin piece of stone. We were treated to a nice buffet lunch in a local fisherman’s village. The day ended with a nice relaxing dip off of a deserted stretch of beach. 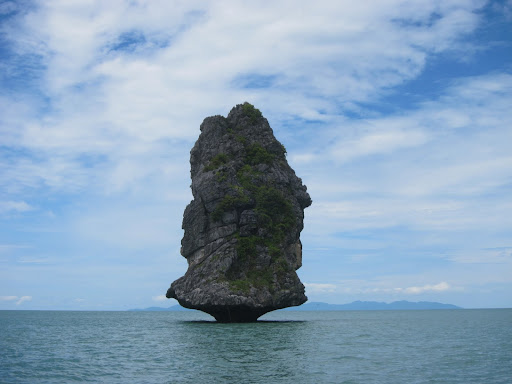 Despite Erik’s warnings that Koh Samui might well be a bust, we really enjoyed our time exploring the beauty, temples, history and nature on this tropical island.