For two people who have traveled as many places as we have, it’s tough to find someplace new and exciting to visit. Since Erik’s birthday was coming up, we wanted to find someplace really special that would knock it out of the park, so to speak.

Since setting off on our Around This World trip in 2010, we have been searching for the often elusive and famously incredible whale shark. Erik’s scuba diving and my snorkel experiences have built up this immense expectation of a life-changing animal encounter. If you haven’t heard of a whale shark, don’t feel too bad. Not many people have. And fewer still have actually seen one.

Whale sharks are actually sharks but have no ferocious teeth that most sharks have. They are the largest fish in the sea, and can reach lengths of up to 40 feet or around 13 meters. They are dark blue in color with white spots covering the top part of their bodies, while their undersides are white. These magnificent creatures are known to be extremely docile and provide snorklers and scuba divers alike with an unforgettable animal experience, given their huge size but harmless nature. 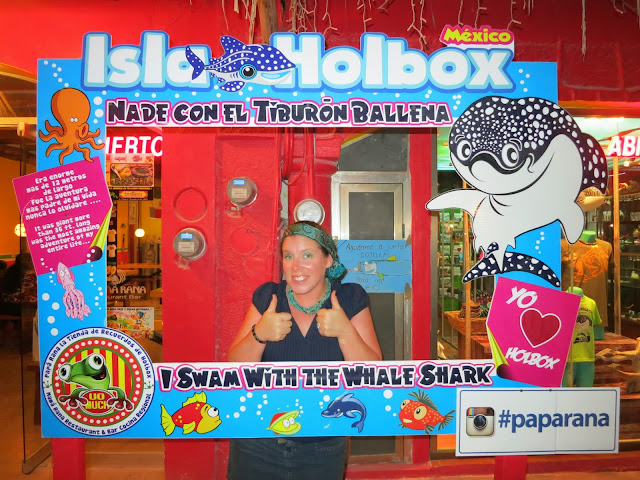 Like I mentioned, we have been on the hunt for a whale shark encounter for over 4 years. Upon researching destinations for his birthday, Erik stumbled upon a very seldom heard of island off the Yucatan Peninusla called Isla Holbox (literally translated as Black Hole Island). Unlike neighboring Cancun, Isla Holbox is a small island with no paved roads, only sand “streets,” with golf carts being the transportation mode of choice. 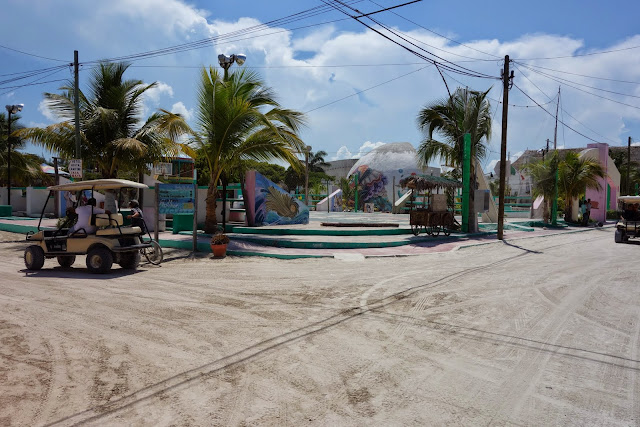 Our whale shark adventure started early with a 7am meet-up with VIP Holbox tour company at their office. If we had to do it over again, we would opt not to book ahead, but wait to book once on the island. There were several reputable tour companies with plenty of space and people on our tour paid far less than us. The hour long ride out to the whale shark area was fairly smooth. We later came to learn that this area has become a whale shark feeding hotspot because in this spot off the Yucatan, the Gulf of Mexico and the Caribbean Sea meet and the different currents stir up plankton and small ocean creatures that the whale sharks love to eat. Therefore, making the waters off Isla Holbox the best place in the world to see whale sharks. 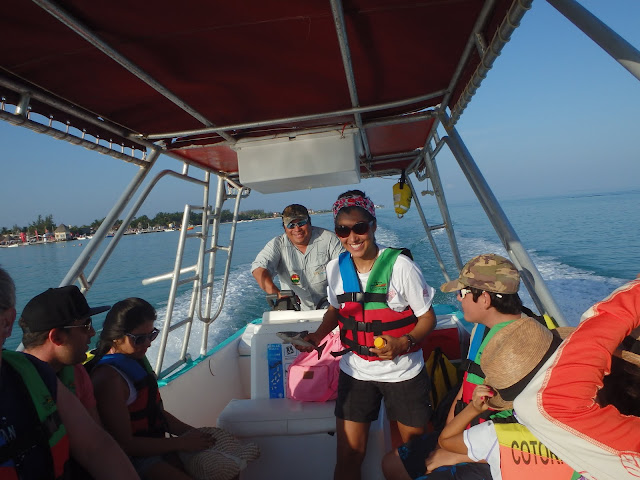 Once we reached the area, it was clear all of our waiting had paid off. Before even reaching the main feeding zone, our Captain spotted sardines jumping out of the water, he slowed our boat, and we saw our first whale shark slip alongside us and under our boat! 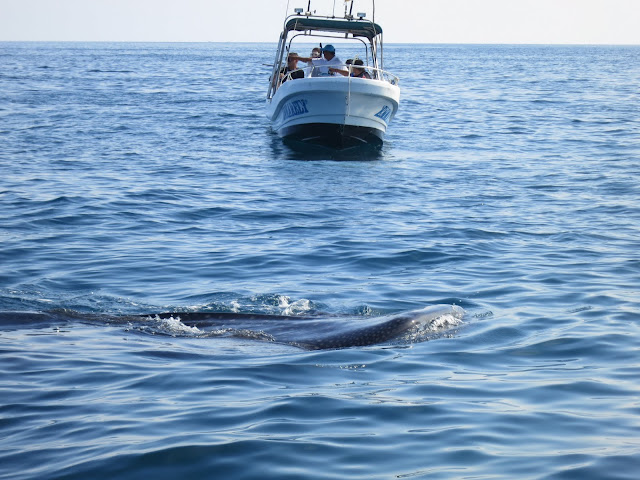 We pulled into the main area where they feed, and both of our jaws dropped as at least 20 whale sharks swam all around us, surface feeding. This was clearly going to be an amazing day in the water!

Our guide had informed us about the whale sharks size, eating habits and how we should interact with them. Only two people would be in the water with the whale shark and our guide, Gabbi. These creatures are huge, but swim very fast. So we were forewarned that in order to see them best and longest, we would really have to swim! We had waited four years for this moment, so we were up to the challenge. 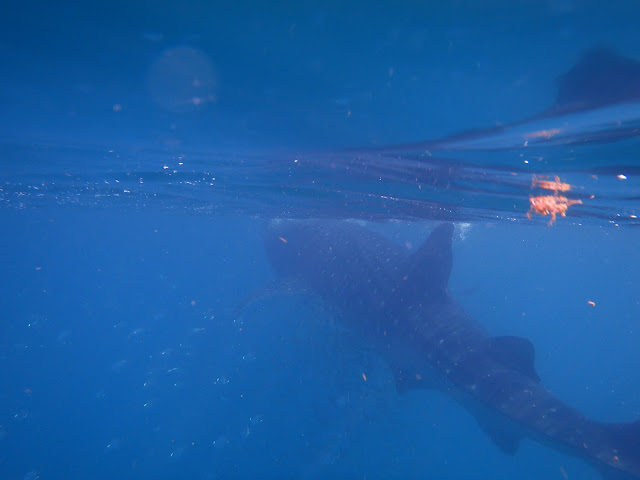 After the first two couples had their turn, Gabbi turns to us and says “You two, manta rays, GO!” We were ready with masks and fins on. We jumped in right next to a massive manta ray. These creatures are also an incredible sight to behold. And although not the main attraction of the day, it was awe-inspiring to see this gigantic beautiful manta ray fly through the water right alongside me. It was amazing!

Our shipmates kept taking turns jumping in with whale sharks and every so often manta rays. When it was our turn again and our whale shark was coming, any fear or anxiety I may have had turned to pure joy and excitement and with huge smiles, we jumped in alongside our incredibly huge and beautiful whale shark. 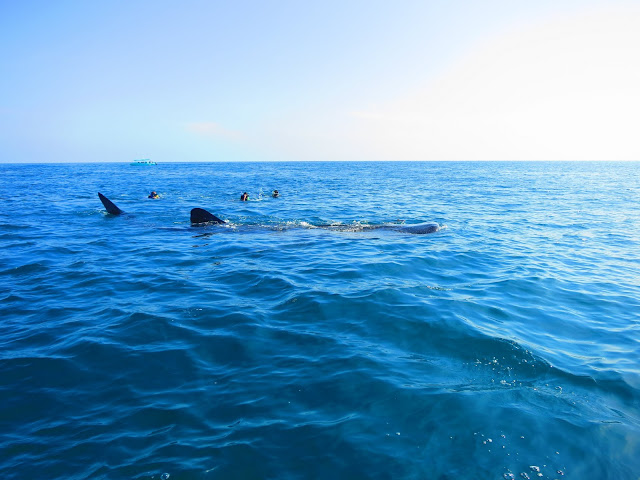 Although I may try to describe it, there really are no words to capture what happened next. We, small humans, swam alongside a 30 foot long magnificent whale shark. Kicking my feet as fast as I could, I did my best to keep up with the whale shark. I outstretched my hands, trying to elongate myself and mimicked the creature’s every move. We kept the recommended distance but were able to get rather close to it, within just a few feet. Remembering that its powerful tail could pack a strong punch if we got in the way. 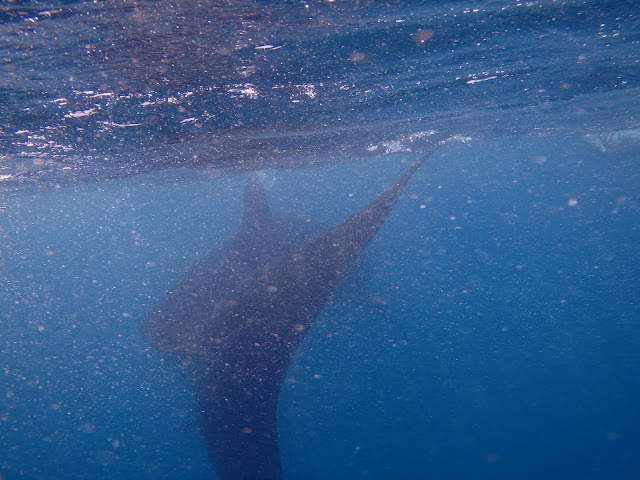 We were simply awestruck, gobsmacked and elated. We were lucky enough to swim with four different whale sharks. Each experience more incredible than the last as we got more comfortable and swam faster still to keep up with them. On my last swim, I was one of the last to get out of the water. The captain jumped in for a quick dip to cool off. Once in the water, he said “hey, un otro tiburon (shark)!” Just my luck, it was turning directly towards us. He told me to swim and I said “tu tambien” (you too). He grabbed my hand and we swam towards the whale shark. That last experience was quite possibly the best of the day. Just me and my whale shark. It was just like you see in the movies. I swam my hardest, again mimicking its movements. When it turned, I turned. And for a good 10 seconds, we locked eyes. There are no accurate words that can capture the feeling of that moment – looking into the eyes of a creature so beautiful, so powerful, so majestic, yet so gentle. It just literally stopped my heart and took my breath away. I swam and soaked in the moment and then, outstretched my arms again, floating as this massive creature swam out of view. It was a life changer, for sure. And a moment I will never forget! 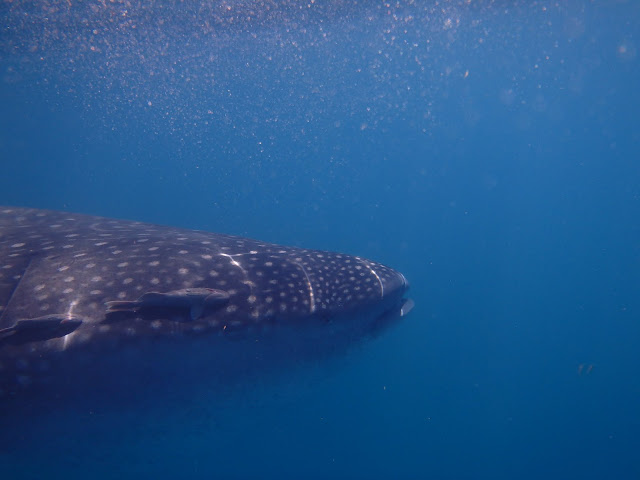 The day continued with a stop in a mangrove and our captain made us some fresh ceviche on board. It was delicious, and although I never eat it, I felt like it was the perfect time to try it. To my surprise, it was delicious and soooo fresh! 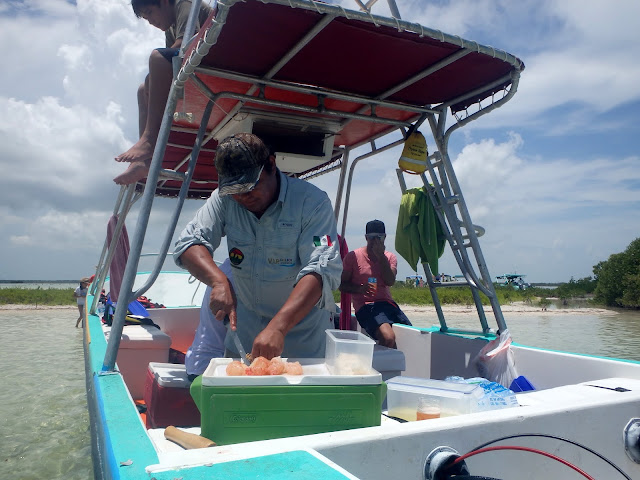 Although our underwater video camera crapped out, we made friends with Paul & Tracie, a couple from Michigan on our boat. They had an underwater camera which they shared along with their photos – many which appear here. Thanks!