A lot of people we met initially discouraged us from attending one of Koh Phangan’s legendary Full Moon Parties. We heard many stories of violence, theft, unscrupulous police, and heaving crowds of idiotic youngsters. Despite all this, I still felt we should go. We were already in the area, with the party set to kick off in a few days and it would have been a shame to miss it.

That said, I had been to a Full Moon Party before – back in 2003 – on a previous trip through Malaysia and Thailand. I was young and dumb at the time, yet the picture painted by people we were meeting (mainly expats on these islands) didn’t seem to match the memories I had from years ago. Granted, it wasn’t for everyone, but if we were to take some basic precautions what would be the worst that could happen?

Ultimately, I left it up to Heather, who was terrified by these stories along with some additional research she had turned up on her own. After some hemming and hawing, she said “let’s go!”, but with the caveat that we would be extra careful and ready to bail whenever we wished. 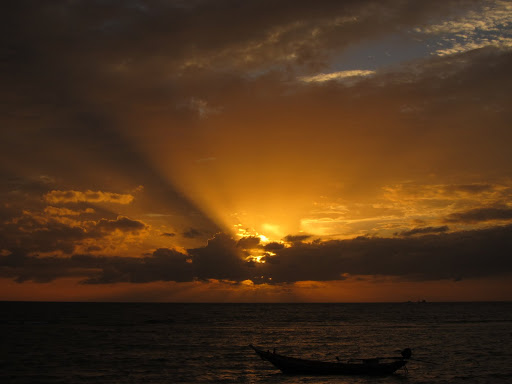 The Full Moon Party (FMP), for those that don’t know, is a monthly rave held on Haad Rin beach on Koh Phangnan, Thailand. Huge stages and sound systems are set up along the beach, and tens of thousands of revelers descend on the action, fueled by extremely cheap and strong “buckets” of booze (usually Thai whisky and red bulls in a small pail). 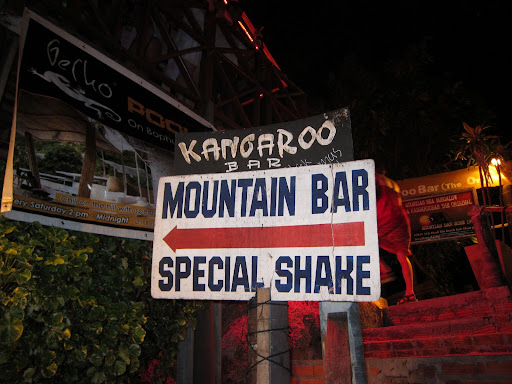 Legend has it this event started as a small event held by one of the bungalow owners as a little send-off for some visiting Australian backpackers. Over the years, it has somehow exploded in popularity, morphing into this full-on dance party which is on the radar of every traveler under age 30 visiting the region.

We arrived a few days before the party and opted to stay on quiet Haad Yao on the Northwest side of the island, at the opposite end from the madness taking place on Haad Rin. Luckily, the islanders – like most enterprising Thais – have figured out how to cash in on the influx of tourists, and transport is easily arranged to and from the party from anywhere on Koh Phangan. 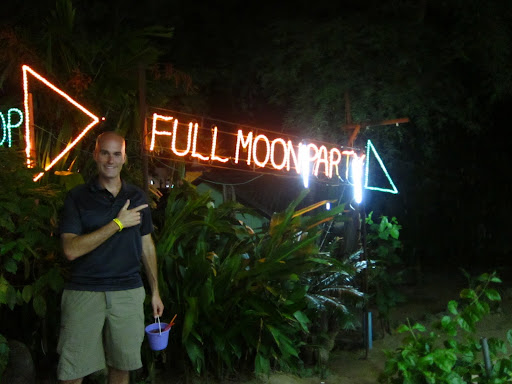 Haad Yao was extremely chilled out, and an outside visitor with no knowledge of the FMP could even be completely oblivious to this massive party taking place just a few miles away. We were grateful to be separated from the crowds and chaos, but perhaps it was just a tad too chill. Bars and restaurants closed down fairly early and many times we were the only patrons in the establishments! 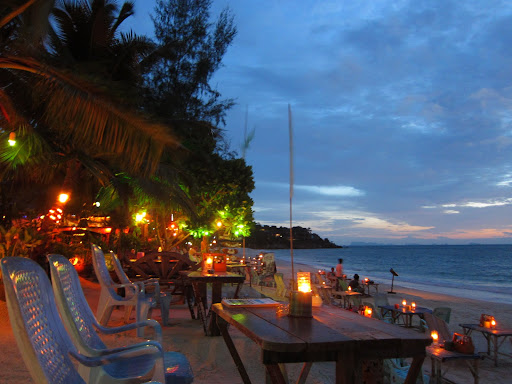 One advantage to Haad Yao, though, is its close proximity to the Sail Rock dive site, situated halfway between Koh Phangan and Koh Tao. I’d been told this site was not to be missed, and booked a day trip with Haad Yao Divers (highly recommended!) to check it out. Heather was able to come along as a snorkeler, though the conditions weren’t ideal for snorkelers and I was nervous about her on her own. While the visibility was less than ideal, my two dives were fantastic and we were rewarded with massive schools of fish swimming circles around us. 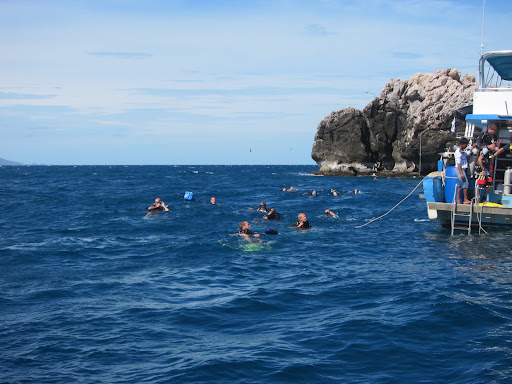 We took it pretty easy the day of the Full Moon Party, resting up before the main event. To limit chances of robbery, we just carried a small amount of money, spread between hidden and zippered pockets. Finally, we pledged to keep an eye on each other, guard our drinks (there are cases of thieves spiking party-goers’ buckets), go easy, and enjoy the festivities.

A pick-up truck organized by our hotel brought us to Haad Rin, where we had to pay an entrance fee and get slapped with a bracelet. Getting right into the spirit, Heather got someone to draw a flower on her arm with neon paint and we bought a vodka bucket (checking closely to make sure the included bottle was properly sealed). 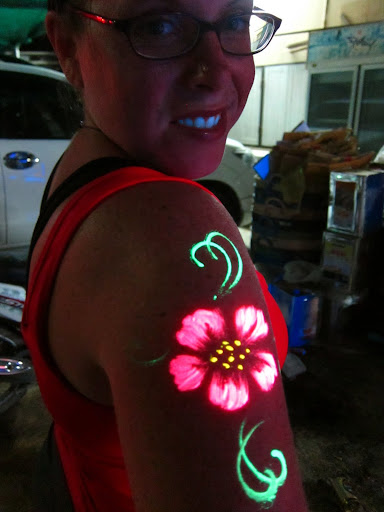 Walking in from the street, we followed a few signs that pointed the way to the party. Soon, we found ourselves at the South end of the beach, in front of a booming sound system. Paradise Bungalows – as legend has it – the birthplace of the Full Moon Party.

Up the beach, as far as the eye could see, people were drinking, dancing, and making fools of themselves. The DJs at Paradise were playing popular dancefloor favorites with gyrating partied people spread all around. Near their neon sign, a bunch of people were clamoring up a large cargo net on one side and sliding down a water slide on the other. Elsewhere, people were jumping through hoops lit on fire. 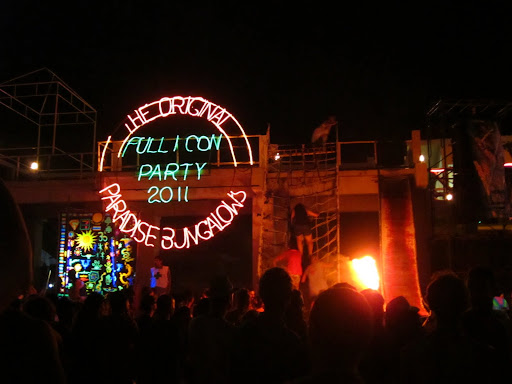 Taking it easy, as we had promised each other, we slowly worked our way up the beach. We enjoyed checking out the freaks – those that had enjoyed one too many buckets (or perhaps other substances). 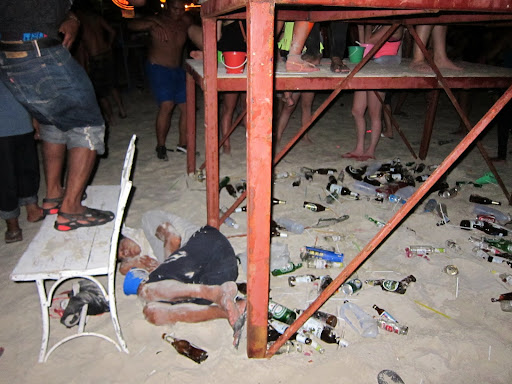 While a lot of the sound systems were cranking out poppy/rocky commercial hits, there were actually some pretty decent DJs rocking Haad Rin as well. At one location, loud Drum & Bass shook the beach, with some very talented members of the crowd stepping up to the mic as live MCs. Elsewhere, Hard House, Trance, and all sorts of other Electronica boomed out. 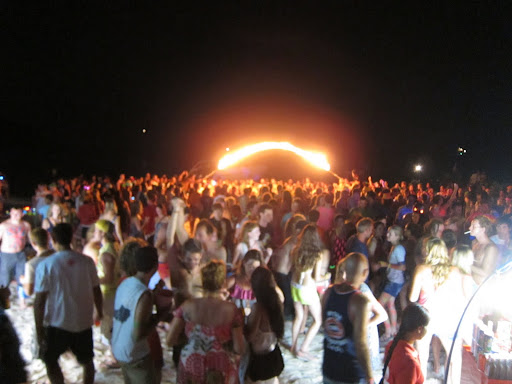 As the night wore on, the crowd got progressively sloppier. It was not an uncommon sight to see someone passed out, vomiting in the sand, curled up into a ball and crying, or looking completely lost and mumbling to themselves. At one point, we saw a girl wearing a life jacket, sitting in a half-sunken rowing boat, with the most confused look on her face. We kept a close eye on her to make sure she didn’t hurt herself.

Luckily, the girl eventually realized she was in the wrong place and crawled back to land, but others we observed were not so lucky. Especially, those that gained the liquid courage strong enough to take on one of the many burning jump ropes, fire rings, or limbo poles. 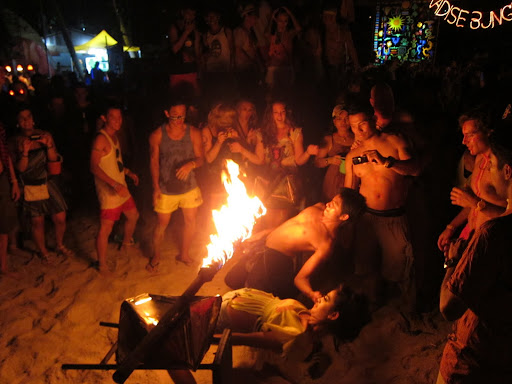 We took this video of people attempting to play skip with a giant burning jump rope:

At least the victims and casualties can choose from one of many health clinics set up to handle the hundreds of burn, dehydration, and other cases the FMP brings. 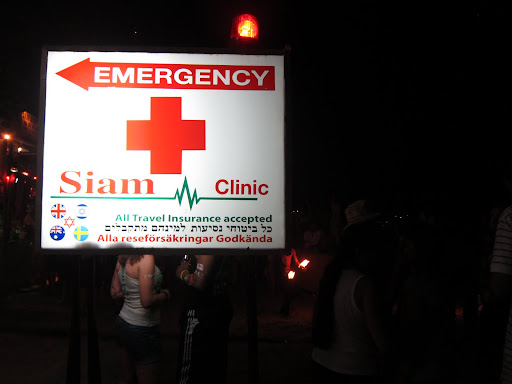 Somewhere around 4am we decided we had had enough. We grabbed some pancakes from a local vendor, who seemed immune to the ridiculous farangs (foreigners) stumbling around like zombies. She told us this was still a relatively small-sized Full Moon Party, and that the bigger events would come later on in the summer. That was fine with us. We found a pickup truck headed back to Haad Yao and jumped in the back, happy to tick the Full Moon Party off the backpacker list. It was time to move on and leave Thailand, headed for country #15 – Malaysia!