No visit to India would be complete without a stop at one of its most iconic monuments, the world-famous Taj Mahal. Like any major tourist attraction, it’s prone to all the things seasoned travelers hate – heavy crowds, scammers, and rampant commercialization. On top of that, the city in which it’s located – Agra – is not the sort of place you want to hang around. Many recommend getting in, ticking off the Taj, and leaving as quickly as possible.

Agra is a few hours from Delhi, and well connected by road and train. India has a fantastic rail network – I was excited by some of the epic train journeys that were possible here. So naturally, I decided to book a train to Agra, treating myself to a “business class” seat. 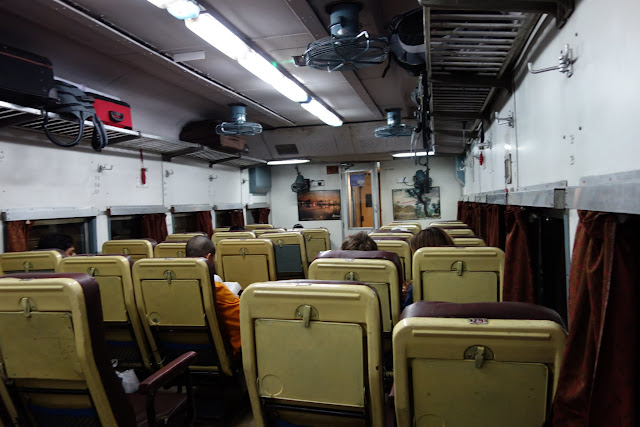 I ended up sitting next to a very nice Indian man that teaches English at a high school in Agra. We talked about our respective countries and he shared some tips for visiting the Taj Mahal. He even went so far as to help me find a taxi to my hotel upon arrival in Agra. While I was still less than a week into my Indian travel adventure, I had already had countless experiences like this – extremely kind and inquisitive locals that were always eager to chat and help me out. More than anything else, it’s the people that truly make this country special.

It’s recommended to visit the Taj Mahal at sunrise, when the skies tend to be clear and the crowds are somewhat manageable. And, of course, the first rays of sun reflecting off the glistening white marble of the monument are truly something special. It was already after midnight by the time I arrived at my hotel, so I went straight to bed and set my alarm for 5:30am, in order to be first in line and through the gates the next day.

After I arose bright and early, I loaded my day pack with water, sunscreen, and other essentials, before heading to the ticket office, where I was #3 in line. As is typical in India, foreigners pay a highly inflated price – 750 Rs (US$ 12) over the 20 Rs (US$ 0.30) Indian citizens are charged. 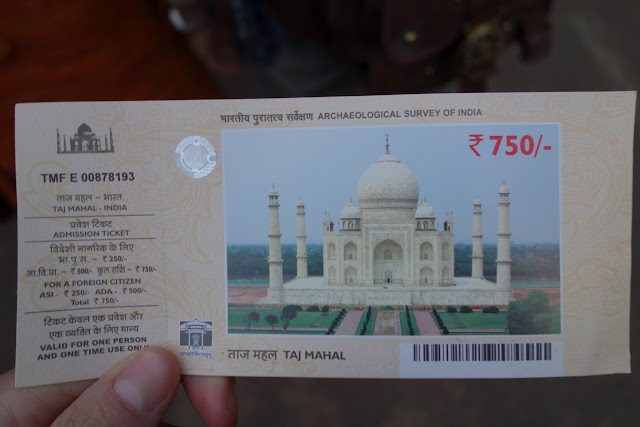 From the ticket office, it’s 800 meters to the entrance gate. Transport is available, but I decided to hoof it. Along the way, I passed packs of camels marching in for tourist rides and photos. 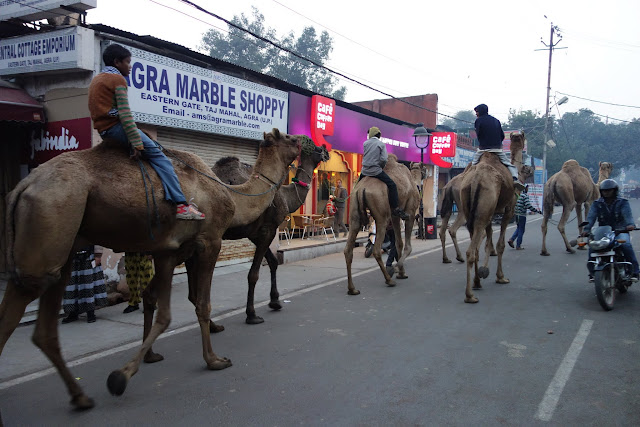 At this point, I still thought I was front of the line…until I got to the gate. There I saw a line stretching almost as far as the eye could see. Oh well.

The Wikitravel page for Agra suggests bringing a flashlight into the Taj, in order to see the inlaid stones in the dark inner chambers. Following their advice, I packed my headlamp. While both Wikitravel and my guidebook mentioned that tripods were not allowed, I thought I would take a chance with my X-Shot Pro camera extender. While not technically a tripod (more like a monopod), I thought it was worth the risk so I could get some good self-takers. 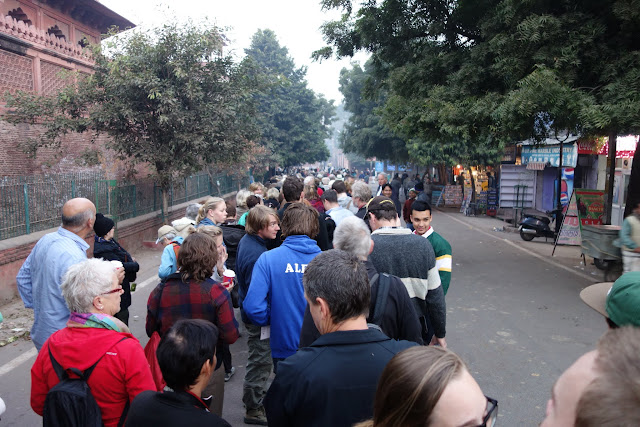 After the gates officially opened and the line started inching forward, I realized my plan wasn’t going to work. Security was much tighter than I expected and people were getting turned away for breaking the rules. Sure enough, by the time I made it to the checkpoint, I was advised I would have to march nearly 1km back to the ticket office to leave the headlamp and X-Shot in a locker. Not wanting to waste any more time, I asked if there were any alternatives. The security guard suggested I leave the items at one of the nearby fake marble souvenir shops. Desperate to make it inside, I found the closest one and rushed back through the gates.

After a short walk through some well-manicured gardens, I followed the steady stream of people through the main red sandstone gate. 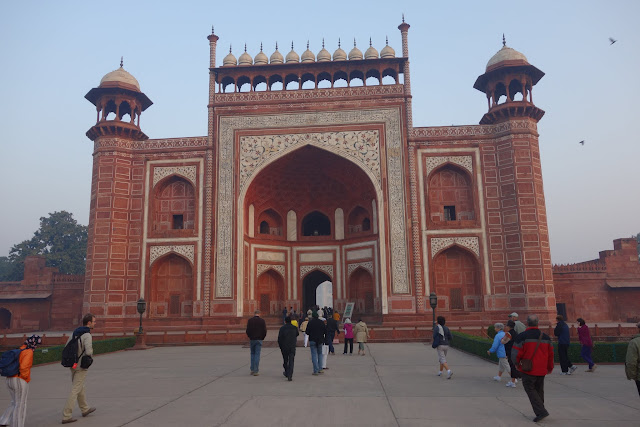 And there it was. The Taj Mahal. 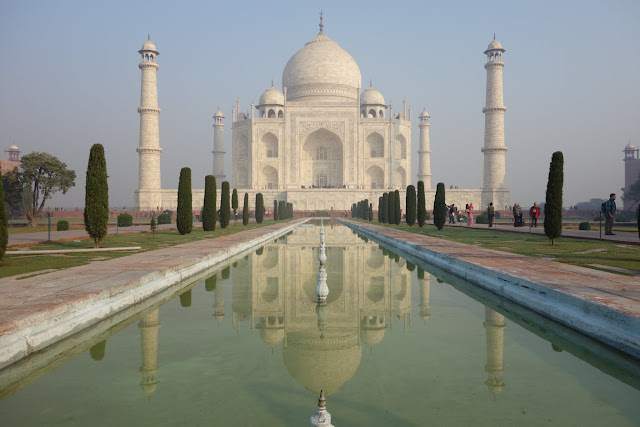 I had seen it in pictures countless times before, but nothing can compare to experiencing it in person. It truly is breathtaking. 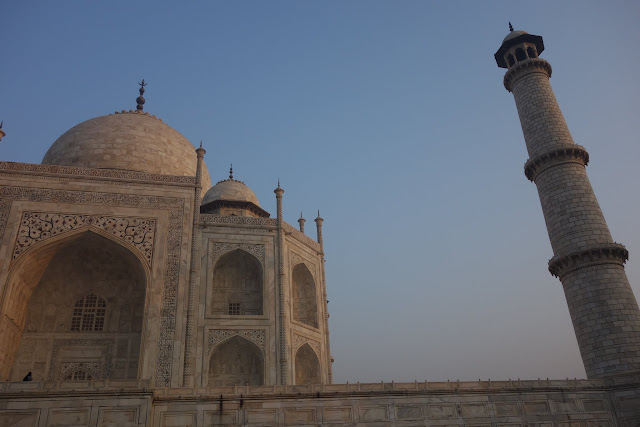 I tried to snap a few pictures before the heavy mob of people started crawling all over the monument. Despite all the advice I had received, it was still very busy there. I can’t even imagine what a real crowd looks like here. 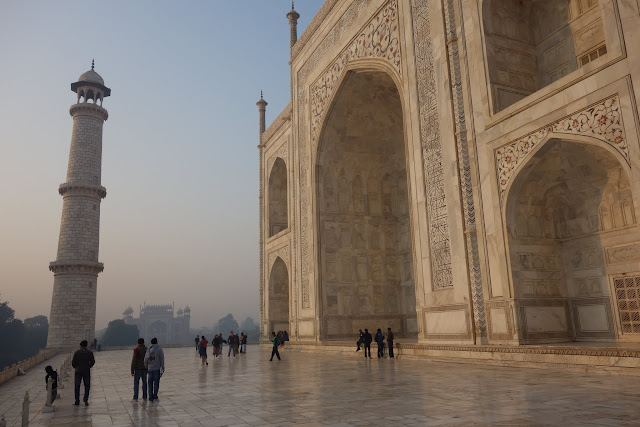 As a solo traveler, it can be difficult to get good photos of yourself. A passerby won’t be familiar with your camera or your preferences, and at this point I was cursing the loss of my X-Shot at the entrance gate. I managed to get a few strangers to take my picture, but none of them turned out that great. 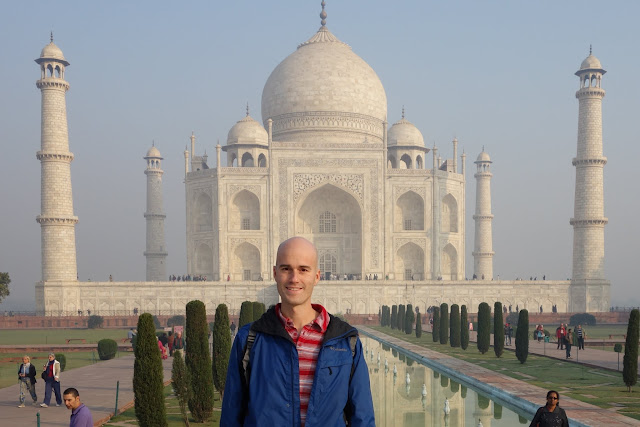 The Taj Mahal is one of the finest examples of Indo-Islamic architecture, built by the Mughal Emperor Shah Jahan in the 1600s as a mausoleum for his cherished wife, Mumtaz. Islamic art and architecture honor God through symmetry and geometry, and the intricate patterns found along the arches, towers, and inlays of the Taj come into focus as you get closer and closer to the monument. 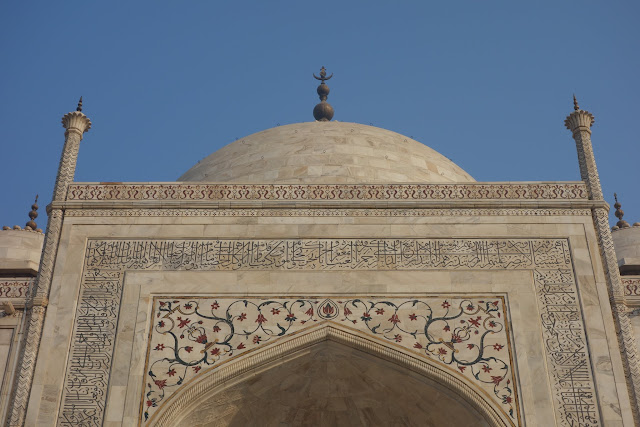 It’s the sort of thing you can really only grasp in person, and one of the things that surprised me most about my visit. I fully expected the Taj to be a bit of a let down. After all, everyone is familiar with this monument, and has seen so many pictures of it in their lifetime. Still, nothing can compare to seeing it in person. It’s no wonder it is India’s must see tourist attraction.

13 thoughts on “Sunrise over the Taj Mahal – Uttar Pradesh, India”