We departed Bangkok to go island hopping around some of the gorgeous islands dotting the Southern Gulf of Thailand. First stop – Koh Tao!

The monsoon months of May-October are generally considered the “low season” for travel through Southeast Asia. Frequent, heavy downpours keep most visitors away from this part of the world, and as a result, it’s generally a little cheaper and easier to get around. Luckily, the monsoons affect some areas more than others. In fact, some parts of the region in the South and East, such as Koh Tao, actually have completely opposite seasons, where these same months are considered the dry season.

After a sleepless night on an overnight bus and ferry from the mainland, we arrived at the small port town of Mae Haad. Koh Tao is a fairly small island, with just a few inhabited beaches along its Western shores, along with some more remote resorts accessible via dirt roads over the island’s mountainous interior on the East side. 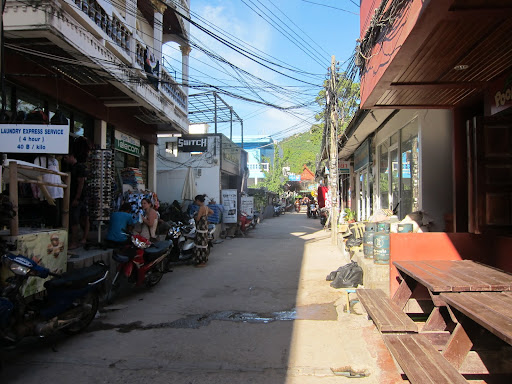 Koh Tao (turtle island) has become a popular destination among backpackers, famous for it’s cheap and plentiful SCUBA diving operators. Since getting my PADI Open Water certification in Utila, Honduras the previous year, I’ve been itching to continue developing my skills. What better place, then, to go for my Advanced Open Water?

I researched many of the dive operators ahead of time and decided upon the mid-sized Asia Diver’s as my school of choice. Since I’d contacted them ahead of time, they had a pick-up truck waiting for us at the pier to take us to their resort on Hat Sairee. 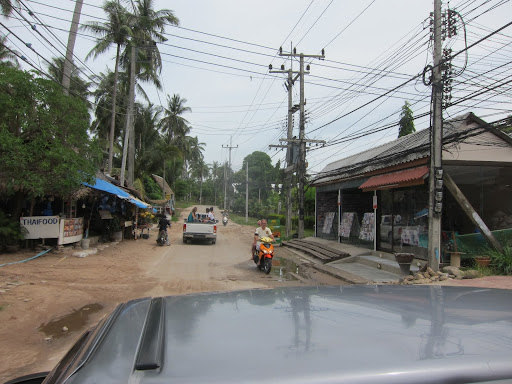 The resort is on the edge of Sairee Village, which is the most popular part of the island. Most of the island’s dive schools, restaurants, and bars are located here, and the large crowds of backpackers frequenting this area make for fantastic nightlife. 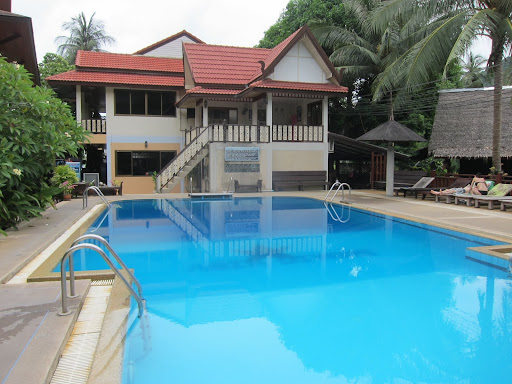 Since the island faces West, most revelers start their evening at one of the many beachfront bars, where you can relax on bamboo mats, admiring the bright orange rays of the setting sun. 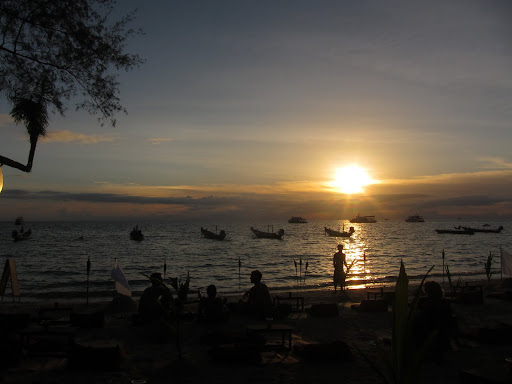 As the last rays of sunshine fade out, small dots far out on the horizon can be seen as squid fishing boats turn on their powerful lights and begin their nighttime activities. Back on shore, the beachfront bars put out tiki torches and begin the legendary fire shows. 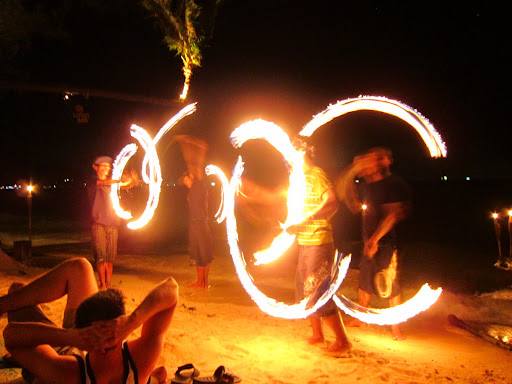 Local boys – some not even in their teens! – dazzle tourists by dancing and spinning all sorts of burning props. Yes, it’s a real pyromaniac’s paradise, though I have to admit it’s a little unnerving watching these guys juggling fire just a few feet away. The fire dancers, sensing the tourist’s fear, will even close in on you, spinning their burning balls inches away from your head. As one of these guys was lapping my head with flames, I thought to myself, “this is one of those situations where it pays to be bald!”

Of course, as the night wears on, tourists and fire jugglers alike begin getting a bit braver. Some people even pressed cigarettes between their lips and asked them for a light. Of course, during our time in Koh Tao, we saw a few accidents. Hey, if you play with fire, you’re bound to get burned.

While the island’s thumping party scene kept us busy at night, I was generally up early each day to complete the dives necessary to obtain my Advanced Open Water certification. Claude, my instructor, and all the assisting Divemasters at Asia Diver’s were great. I opted for a quick refresher, as I’d only logged one short dive in Argentina over the nine previous months after getting my Open Water in Honduras. 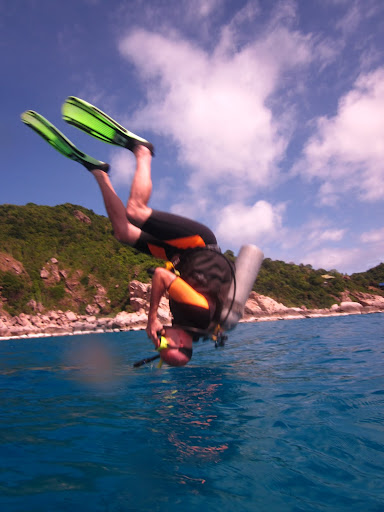 As part of the course, I was required to take an underwater navigation and deep dive (to 30 meters/100 feet). The deep dive was particularly fun; we felt the effects of nitrogen narcosis, which slows your thinking, and watched as colors faded away and everything appeared blue at depth. In addition, one of the divemasters cracked open an egg, which remained perfectly intact due to the high pressure. We batted it back and forth like a ping-pong ball! 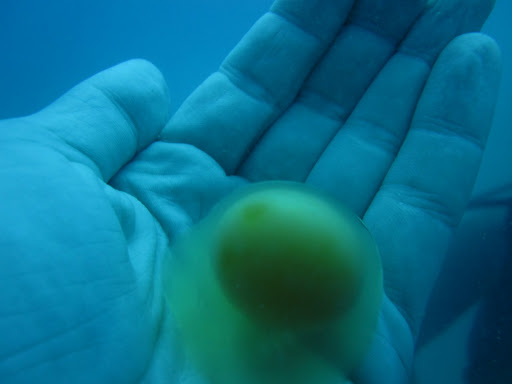 I also opted to learn more about underwater photography, peak performance buoyancy, and night-diving, along with a few fun dives thrown in for good measure. Of course, it was a blast, though I felt bad that Heather couldn’t join in on the fun. I keep encouraging her to try diving – I think she would love it – though she always refuses. Maybe some day! 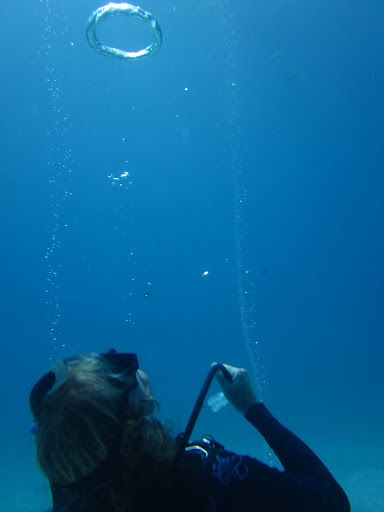 Heather’s birthday fell on one of the days we were on the island and we celebrated in style. On the big day, we joined a snorkel tour which took in sights around the island. Unfortunately, much of the coral around the island is dead, however there are still a great number of colorful fish. 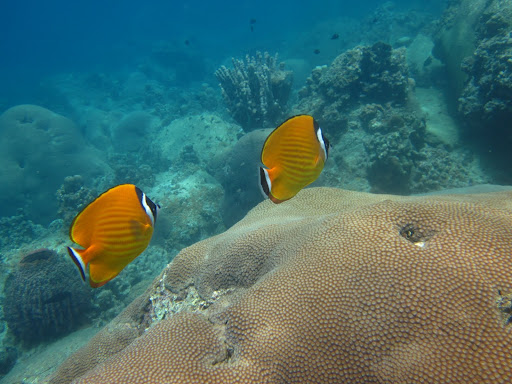 The tour also included a stop at the small neighboring Koh Nangyuan island. There, we climbed a small hill to take the classic postcard shot of this picturesque island. 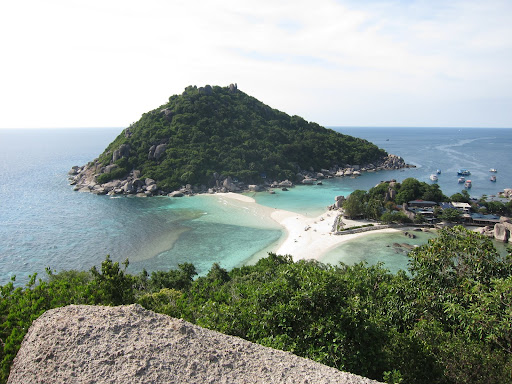 Some of the guys at Asia Diver’s suggested I take Heather to Lung Pae restaurant. This has got to be the island’s most romantic restaurant, perched high on a hill with beautiful views of the surrounding area and excellent food. She ordered giant prawns (2 were more than enough) and I went for their famous steak. 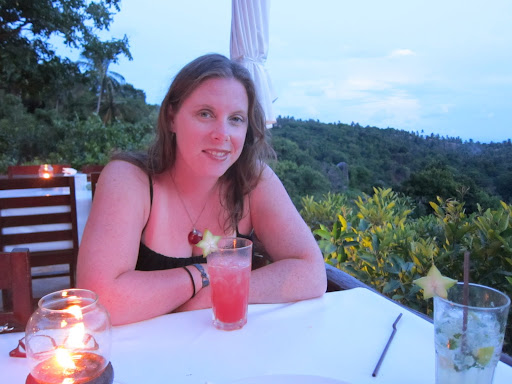 That night, we visited the “cabaret”, where Thai ladyboys performed a hilarious musical review, dancing and lip-syncing to Western hits like Lady Gaga and Britney Spears. Some of them were actually pretty convincing as you can see in this video:

Back in our room, I brought out a small cake with candles and sang her Happy Birthday! 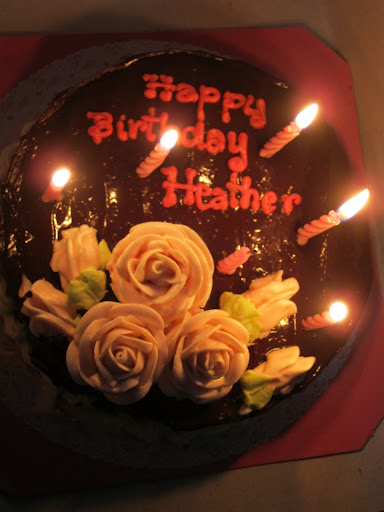 We had a blast on Koh Tao, but after a week we were ready to move on to the beaches at its bigger neighbor, Koh Samui…