While enjoying the relaxed pace of the hippie hangout, Byron Bay, we took frequent walks up and down the beautiful beach, going there nightly to watch the sunset and listen to the rhythmic crashing of the waves.

The seas are teeming with life here.

During a dive at Julian Rocks, in the middle of the bay, I came face to face with 6ft long nurse sharks and funny-looking bottom-dweller wobbegong sharks.

Later, Heather and I tried our hand at ocean kayaking, paddling around with a few dolphins and watching the ominous shadows of sharks swimming beneath the surface.

But one of the most amazing underwater encounters happened on firm land! While we were taking one of our regular strolls along the beach, we saw a large bluespotted stingray wash up on the beach. Fighting the heavy surf, the little guy was flapping away, clearly disorientated and fighting to make it back into the water. Along with some other beachgoers, we gently cleared away some of the sand and opened up a channel for him. After a couple of unsuccessful attempts, he eventually slid back into the water and went on his merry way.

It was our very first stingray rescue! 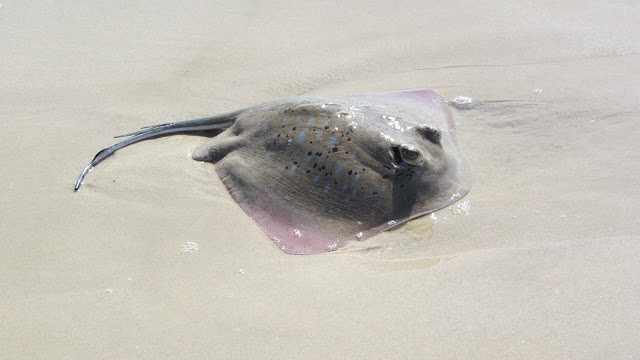 You can read more about our time in Byron Bay in the archives.