After stomach ailments and altitude sickness in La Paz, we finally booked a flight to Rurrenabaque. This is the small riverfront town where tours depart for the jungle and Pampas. We had heard from other backpackers along the way that the Pampas tours were great, so after a disappointing trip to the Amazon in Iquitos, we were psyched about seeing lots of wildlife that live there. Since Rurre (like most jungle towns) is so remote, we had to fly there.

After a big night out, we headed to the airport with our bags and our hangovers in tow. Now I knew this would be a small plane, but I had not prepared myself quite enough for just how tiny it was. Once we saw the minuscule plane we were about to board, we all were a bit shocked and I started to cry. I’m afraid of flying in general, let alone a 19-seat twin-prop airplane where even I – at 5’2″ – cannot stand up. It took nearly all that was in me to get myself on that tiny plane. Then the tears came and panic really started to set in. There was a small aisle with only one seat on each side going back 9 rows. 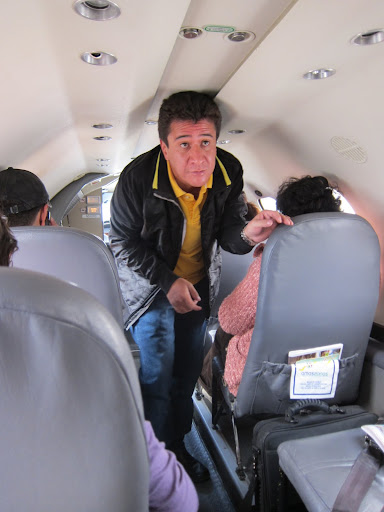 Everyone was laughing about how small it was as they squeezed their way on, except for me of course, who was crying. The flight was different than most as it was flown mostly manually and we felt every little bump and air pocket. Somehow, we landed in Rurrenabaque in one piece and I could breathe again. The plane taxied over grass to the tiny airport building. 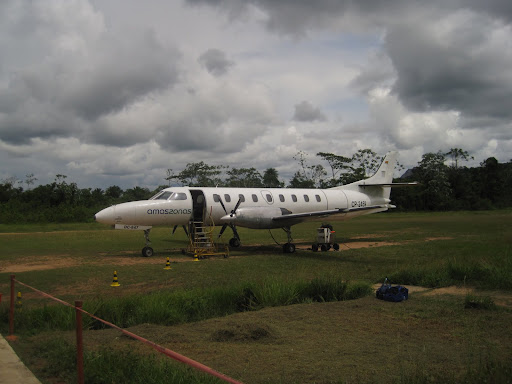 We hopped on the shuttle to town and soaked up the heat as we searched for a place to crash for the night. We hunted around town and finally booked a tour with Indigena for 9am the next morning. There are many companies offering tours, but we’d heard some guides pick up and wrestle anacondas or let tourists touch some animals. We asked lots of questions to make sure we chose an ethical company.

Rurrenabaque is a cute little town, with a lot of life and some nice restaurants. Believe it or not, we had some great food there, surprisingly even better than many meals we had in La Paz. 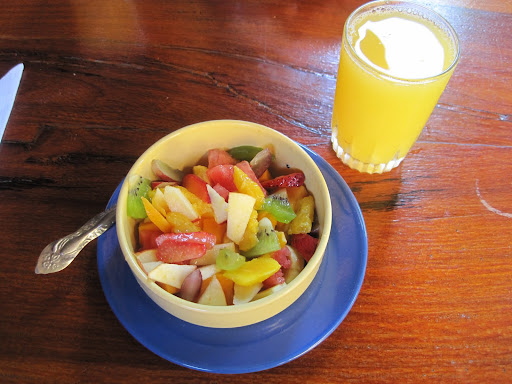 The next morning, after a delicious breakfast at Casa de Campo, of eggs, freshly baked croissants, fresh bread, nice orange juice and a crisp fruit salad, we piled into our jeep and began the three hour very bumpy and dusty ride to the river Beni. Along the way, we saw several vehicles pulled over changing flat tires. One had no spare and asked to have one of ours. We gave them one and had one left. Thank goodness we did – because a few minutes later, we got a flat tire, as well. It was a nice photo op, though, as quite possibly the largest herd of cattle we’d ever seen soon surrounded us. There had to be a few hundred scattered around us. Just a few minutes later, our tire was fixed and we were back on our way. 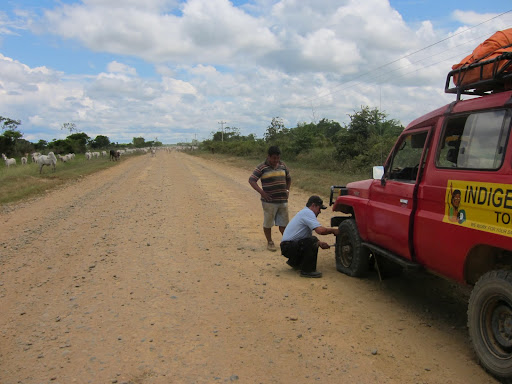 Once we finally reached the river, we gathered all of our bags and supplies and loaded them into our boat. This is where the fun really began! 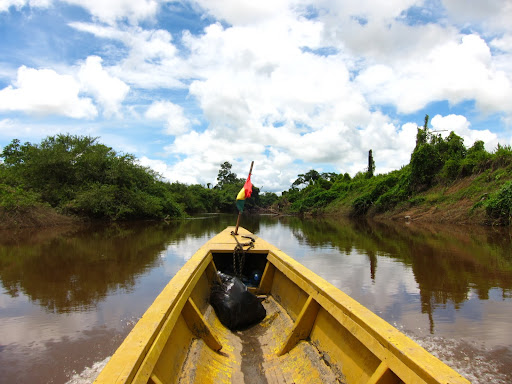 The weather was nice but not overly sunny, which was great since we were on the river for nearly 3 hours. Once we were on the river, we knew instantly that this was going to be worlds better than our other jungle tour was in Peru. Along the way, we saw tons of animals, alligators, caymans (we still haven´t been clearly told what is the difference between them). Just a few minutes after we got on the water, our guide pulled us over to see some alligators on shore. We got really close and it got spooked and lunged for the boat. It splashed us as it headed back underwater. Whew! 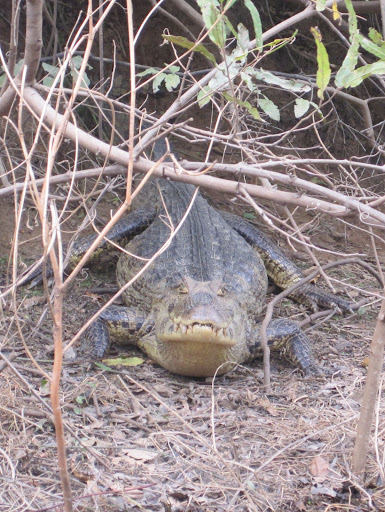 We saw turtles, capybaras (the world´s largest rodent – very strange looking and huge!), eagles, beautiful white storks, odd-looking birds of paradise that reminded us of chickens, and the rare pink dolphins! We also saw different species of monkeys – cappuchin, spider and howler monkeys and these adorable yellow squirrel monkeys (main photo above), which we saw for the first time there. 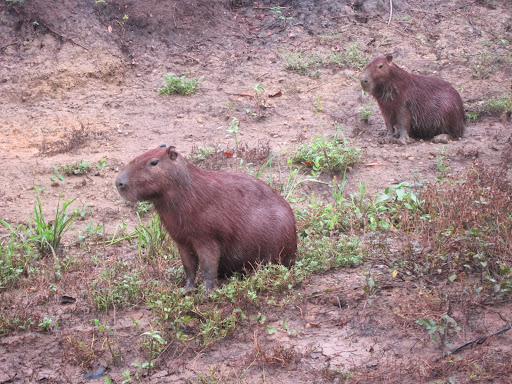 After the amazing boat ride, we arrived at our lodge. Lucky for us, we were the only lodge in the Pampas that served beer. We had heard there was only one lodge that did so we were lucky we were there! We unloaded our stuff from the boat and got settled into our cute cozy dorm fitted out with screens and individual mosquito nets on the beds. The accomodations were basic, but fine. Everyone rushed for the showers and felt much more refreshed afterwards. We headed to the deck with a beautiful view of the river and caught a gorgeous sunset while sipping cold beer. Then, we had a nice dinner, but there seemed to be little food. We all left the table hungry. 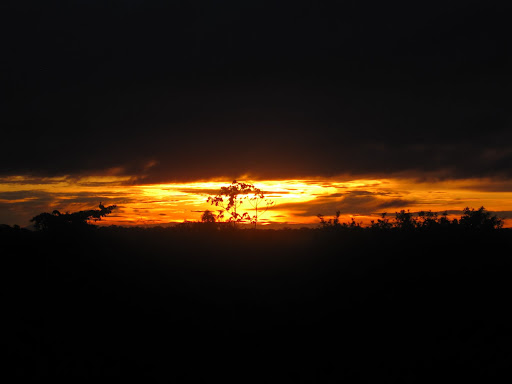 After dinner, we met our guide at the boat for our night ride. Our guide was nice, but did not speak English, as the woman in the office had told us he would, but thank goodness, our Spanish is good enough now that we were fine. Others in the group weren´t so lucky and I felt that this was quite unfair. The night boat ride was exciting and a bit scary. Once we were out on the river, we could see hundreds of caymans eyes, and I mean hundreds!!! It was frightening and a bit unnerving to see just how many of these ravenous creatures were lurking just feet from us and in the DARK! We could hear the sounds of the night as well, insects, frogs and bats swooping above our heads. After that, we headed back to the lodge and shared a few beers and played a huge game of cards. Good times. 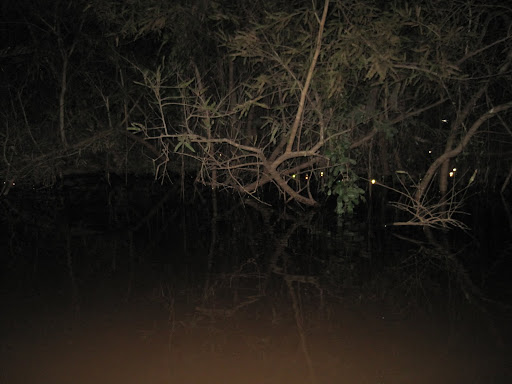 The next morning, our only full day, we woke up to rain. We hoped it would pass as we ate breakfast, but it didn´t. We headed out to our first excursion – the search for an anaconda – in our ponchos. It was a bit muddy, but we were given boots, and thank goodness we had checked to see if there were holes in them, because a few peoples´ feet were soaked! I can´t say the walk through rain and mud was fun, but it was interesting. I did spot a dead anaconda and our guide told us that a fire a few months ago had wiped out several hundred anacondas. Finally, we came to a small lagoon. Here we saw a huge cayman resting along the shore watching over its nest. This thing was huge. We got a photo of it, but didn´t want to get too close. So I snapped a quick photo, and then scooted away. We´d heard from some girls the night before that when they were taking photos of a huge cayman, it lunged at them and they dropped their cameras and ran for life, including their guide! We didn´t want such a close call, so played it safe instead. While circling the lake, one of our guides found our goal of the day – an anaconda. Coiled up in some reeds, this huge snake rested as it was shedding its skin. We all snapped photos and many of us were scared that we were so close to it. It was cool to see it, but it would have been neat to see it slithering along the ground so we could see just how long it was. But, I´ll take their word for it. 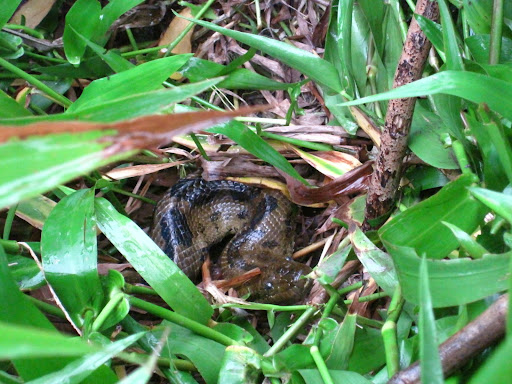 Then, we headed back to the boat and back to the lodge for lunch. After our siesta lounging in hammocks and chilling out, we headed out in the boat again for pirhanna fishing. We´d done this on our other jungle tour, but figured we´d see a lot along the way. And we did! We saw tons of capybaras, caymans, and more pink dolphins! It was a fantastic afternoon on the water. Erik was the only one in our group that caught a piranha. Tiny as it was, it was still a piranha. While we were fishing, a very smart eagle perched itself on a neighboring tree and waited for our catch. Our guide threw a fish into the air and at least once, the eagle caught it in its mouth! 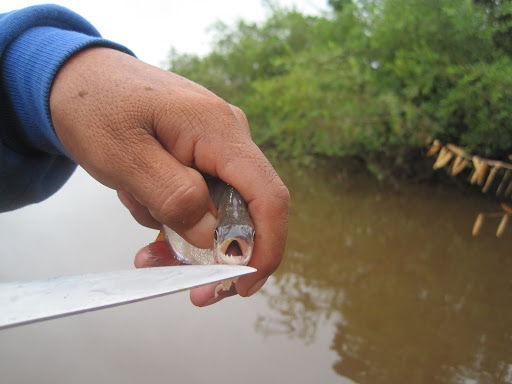 We saw another cayman nesting along shore, and got rather close. Our guide took us to a “store” to get chocolate and snacks, which was great since we were starving since they barely gave us enough food. To get there, we had to walk through this really thick mud and most of our flipflops got stuck and fell off in the mud. Another night of a beautiful riverfront sunset, and after dinner, more card games.

The next morning, we were supposed to get up at 5am to watch the sunrise, but again, it was raining, so our guide told us to go back to sleep. After breakfast, we headed out for another river tour and saw more beautiful animals and we also got to swim in the river. Even though I am quite sure there were caymans lurking not too far from us, the water felt nice and refreshing, but it was quite a challenge getting back in the boat! 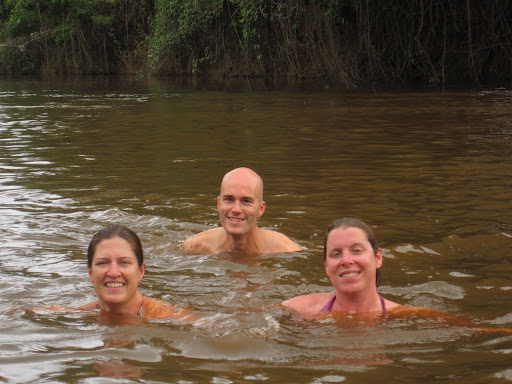 Sadly, it was time to head back to the lodge for lunch and then pack our things. It was wonderful seeing such a variety of animals, and so many. I felt like it was too short, but the standard tour is a 3day/2night tour. We climbed back on the boat and this time, the sun came out. Our sunscreen was packed away, so I knew that I would get a nice sunburn, which I did. But, the boat ride was really nice and again, we saw lots of cool animals. 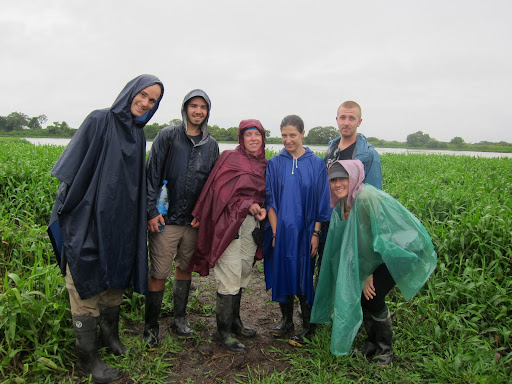 Because some members of our group had a flight to catch that afternoon, we were put in the “rapido” car, which we immediately spotted when it sped down the road and screeched to a halt. That´s our ride, we said. And it was. The zippy car was quick, but had steering problems, so it was another hairy, bumpy ride back to Rurrenabaque.

We had a delicious meal that night and Erik had one of the best steaks he´s had on the trip so far, though it was later questionable whether it might have gotten him sick a day later. But, it was a nice meal and we had a relaxing last night in Rurre. 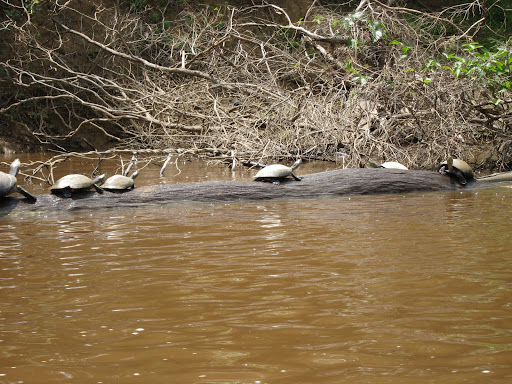 The next morning, we had another delicious breakfast at Casa de Campo. We headed to the airport, but this time, I was ready. A friend of ours from the tour had given me a little present – Valium. I had never taken it before, and was a bit hesitant, but I have to say, it was a dear friend to me that trip and made the flight back so much easier. The flight back was just as bumpy and shaky, but I felt much more calm thanks to that little pill. 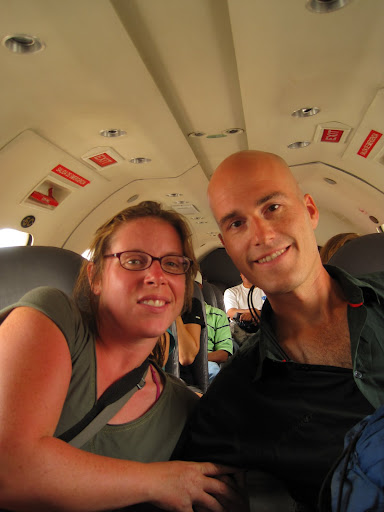 Scary flights aside, we had a great time in the Pampas. The wildlife was amazing and this trip was definitely one of the highlights of our time in Bolivia.

1 thought on “Soaking up Wildlife in Las Pampas, Bolivia”