With the taste of disappointment still fresh on our tongues, we walked to the Pucón bus terminal to catch our ride to Valdivia. Still mocking us, the volcano was perfectly clear in sight as there wasn’t a cloud anywhere near it. Boy, had we picked the wrong day to climb…

Valdivia was a spontaneous addition to our itinerary because we were still try to figure out the best route through Chile and Patagonia. Erik mentioned the words “sea lions” and I was in. 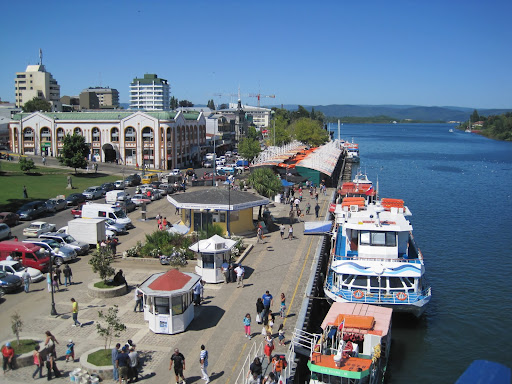 Valdivia is a cute little fishing town with a fantastic fish market right on the banks of the Valdivia River, which runs into the Pacific. The fish are huge, plentiful and fresh. The first night in town, Erik had the Chilean version of fish and chips with fresh merluza and I had fresh corvina in a butter sauce. Having lived in London for 5 years, I was surprised when Erik said it was some of the best fish & chips he’d ever had. My fish was ok, not overly flavorful, but it was nice to have a safe option for me on the menu other than chicken. I think one of the reasons that I’ve gotten sick far less than Erik on this trip is because I only eat vegetarian or chicken. I’ve heard this from other travelers, too, and I definitely think there’s truth in that. 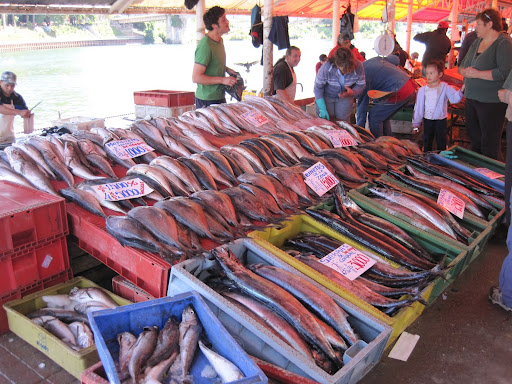 While down by the water, we saw the resident sea lion colony that waits by the river’s edge at the fish market for scraps the fish mongers toss into the river for them. The enormous sea lions and the seagulls fight it out, but the sea lions usually win. These guys were nowhere near as cute as our friends in the Galapagos and many started fighting with each other, barking and biting each other in the face. Several even had cuts around their mouths from previous conflicts. But, it was still neat to see them up close. 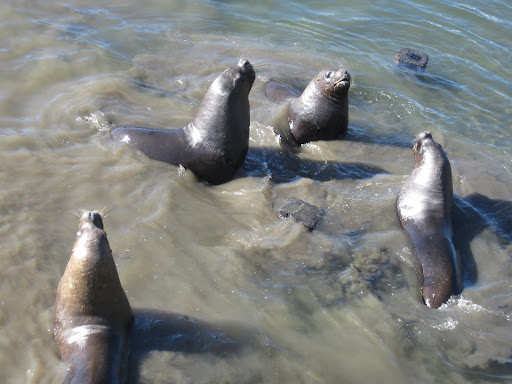 A popular day trip in Valdivia is an afternoon boat trip through the “Siete Rios,” the seven rivers in the area. We chose to go with the Reina Sofia ship, since we read online that the Meson de Mancera ship had had a collision with an old shipwreck just three weeks before. We had nice seats by the window and the lunch was really quite good for a cruise meal. Erik went with the popular curanto dish (also called pullmay), which is a huge platter of mussels, clams, a chicken leg, pork, a piece of sausage and boiled red potatoes. It smelled delicious and he really enjoyed it. I had ordered the chicken, but regretted it since I figured I should be eating seafood in a place with such fresh fish. When the waitress came over and told me there was a problem with the chicken and that I cold choose curanto or the salmon, I quickly switched to salmon. La forza del destino… 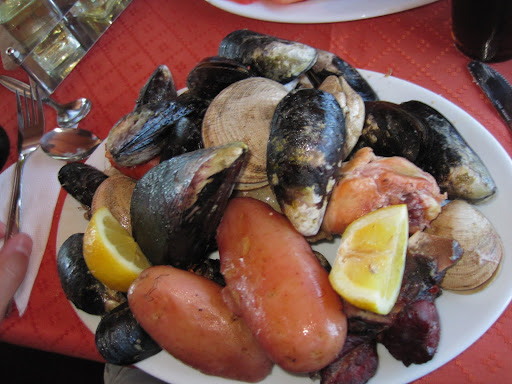 We got to see beautiful landscapes of the surrounding areas from the boat and even got to stop at two old forts that were built by the Spanish to protect the people from pirates and other invaders. One of the forts put on a cheesy war reenactment show, which we later learned had at one time been postponed since one of the teen actors had mis-shot the gunpowder and shot his foot. 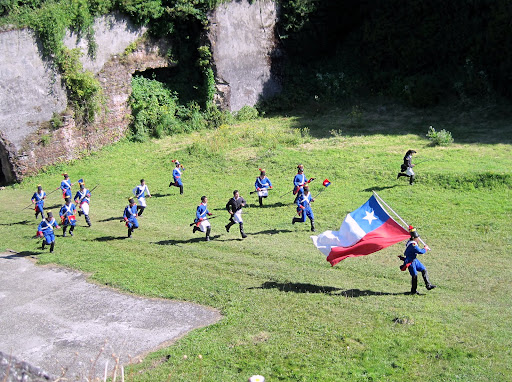 The first fort San Pedro Altacara had a neat underground artillery storage crypt which was in complete darkness except for a small window of natural light above – this made for some cool, spooky photos. 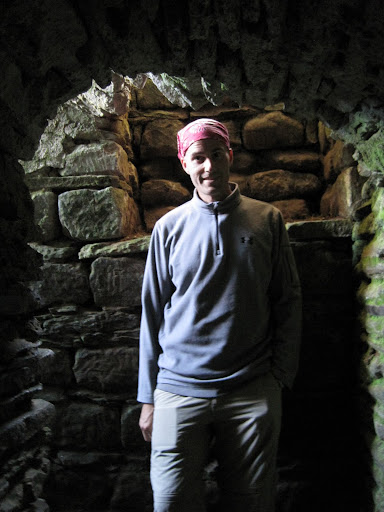 We met a nice Swedish backpacker on board and we swapped hostel and travel advice as he was heading north, and we are heading south.

That night was the Super Bowl back home in the States, and I was determined to find a way for us to tune in to the big game. After channel surfing on the hostel TV, sure enough I found the game with Spanish commentary. Even though I really could care less about football, it was still fun to be watching and taking part in an American tradition even though we were a continent away.

There are a couple of nice museums across the bridge from the main dock area. We visited the Museo de Arte Contemporanéo. We found the building itself was far more interesting than the art as it is housed in the old Cerveceria Antwander. The main structure of the bottom two floors is mainly intact, but much of the building was destroyed in the major earthquake of 1960. It was neat but also a bit scary to walk down these huge cellars where they used to brew beer. Then, we visited the Museo Historico, which is held in the old mansion of brewery founder Antwander himself. To cool down a bit, we stopped for a cold beer and a salad at the Salzburg beer garden. 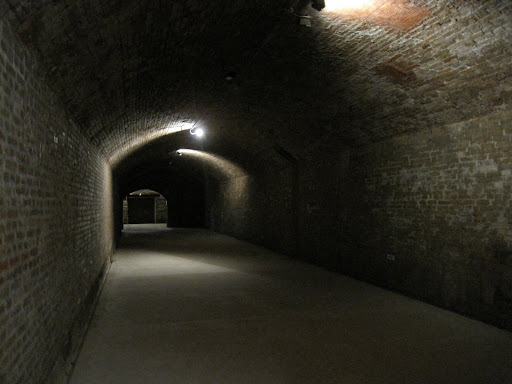 Since there has been a major German influence due to immigration in the area, the other main attraction here is the Cerveceria Kunstmann. A quick 5 minute busride out of town and we were there. Mind you – this was 3pm on a Tuesday afternoon and it was packed. We were glad we hadn’t come on a weekend evening – I can’t imagine how crazy it must be. After waiting a few minutes for our table, we sat down to peruse the menu. Erik decided on the currywurst with fries and I had my new favorite – an ave palta, chicken and avocado sandwich with tomato and mayo. 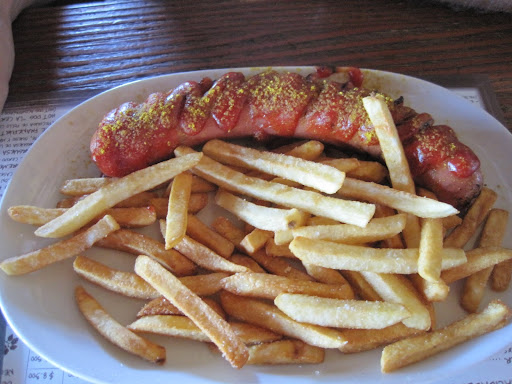 We also ordered a tasting sampler of their 9 artisinal beers. To be honest, we didn’t really understand the hype as we didn’t really love any of the beers. The food, on the other hand, was delicious. Both portions were huge and very tasty. 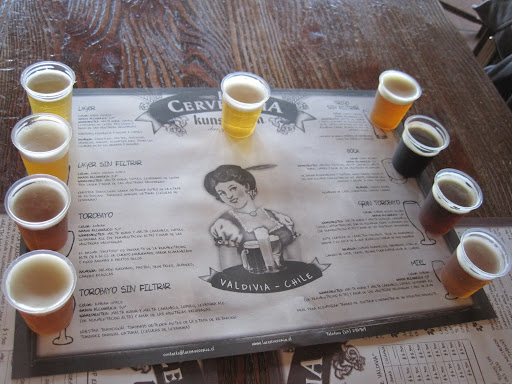 We were happy we had added a stop to the cute riverside fisherman’s town of Valdivia.

Next time, we head back to Argentina and enter the beautiful and famed Lakes District.