After the sadness we felt in seeing the devastation left by the earthquakes in Christchurch, we were happy to move on to the town of Akaroa. As usual, the New Zealand scenery did not disappoint. The drive to Akaroa was one of the highlights of our roadtrip. We realized that we are doing really well on gas with our Jucy Jazzie car. She gets 280miles/450km per tank!

The great thing about having all of our cooking stuff that we had intended to camp with was that we could stop and make lunch anywhere. As we came upon Lake Forsyth, we found a wonderful picnic spot right alongside the lake. We spread out our picnic blanket, set up the stove and Erik cooked up some delicious grilled cheese, chicken, bacon and onion sandwiches lakeside. YUM!

From a scenic viewpoint just outside of Akaroa, we were treated to a spectacular panoramic view of the bay with its gorgeous turquoise water and lush green mountains. Simply stunning. 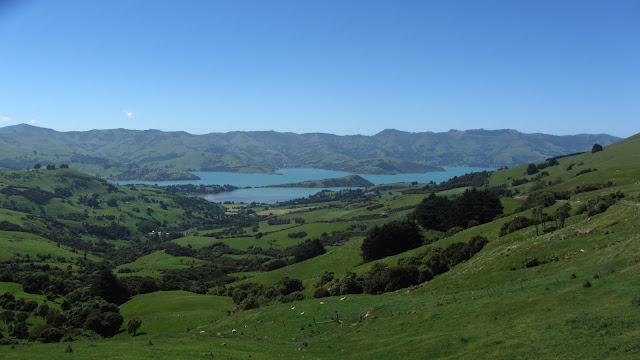 As we continued down the mountains winding roads toward Akaroa, we passed Barry’s Bay Cheeses (thanks to our trusty Tourism Radio). We tasted some delicious creamy cheeses and bought a nice garlic cheddar to have with wine at dinner. We made our way to the Akaroa Holiday Park and settled in to our cute little cabin. I scoped out the holiday park’s community kitchen and started making a nice pot of homemade tomato sauce. One of the perks of these kitchens is that people ending their travels often leave food and kitchen items for other travellers. I happily scooped up some balsamic vinegar, olive oil, sponges, and some mie goreng noodle meals. Score! 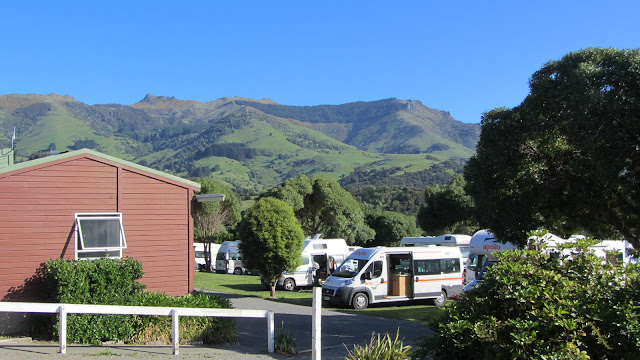 We had some fresh bruschetta, Barry’s Bay garlic cheddar with a crisp New Zealand Sauvignon Blanc. Doesn’t get much better than that. After dinner, we researched tours of the famous New Zealand blue penguins. The next morning, we booked an afternoon cruise with Ray at A-Class Sailing. It’s an old wooden sailboat that gives daily tours around Akaroa Bay. We totally lucked out with the weather as it was crisp and clear with stunning blue skies. As we set sail with just four other guests, I was a bit uneasy as sailboats really do tip to the side quite a bit! 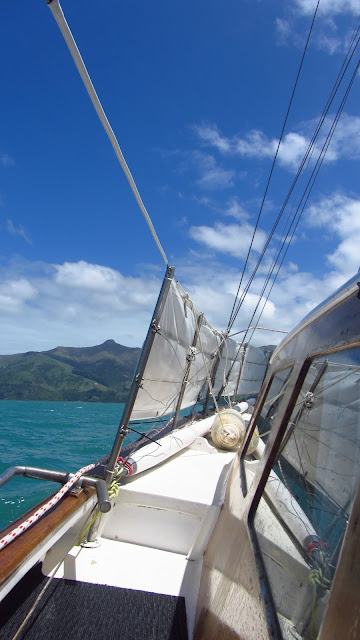 Other than that, we had a wonderful relaxing day on the water. We even got to steer the boat a few times! 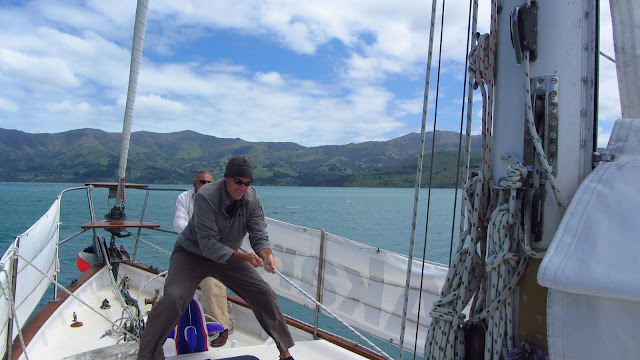 We were lucky to catch a mother and her tiny baby dolphin swimming right alongside our boat. How adorable! Sorry to say we cannot share any photos of them – they were just too darn fast! Our luck continued as we even saw a few blue penguins swimming around the bay. 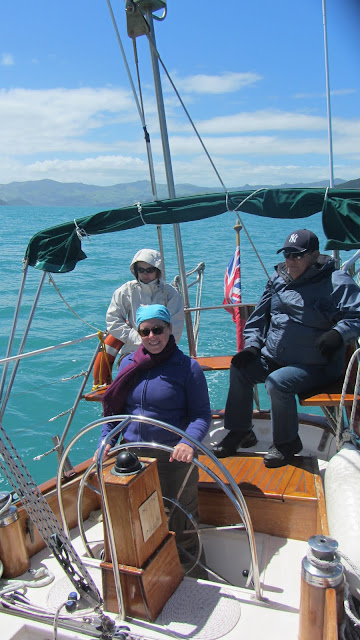 Later that day, we headed to the town centre for our pick-up for the evening Pohatu penguin safari. We had an adorable Kiwi girl as our guide. The drive to the starting point of the tour was again breathtaking. And steep! On the ride there, she was telling us about her brother who had lost his house in the Christchurch quakes. So sad. 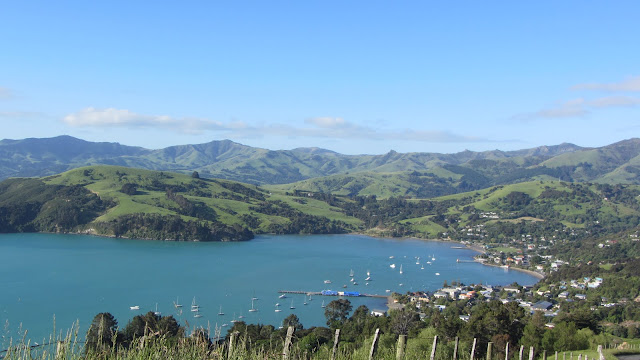 When we arrived at the farm, we were greeted by four lambs running around everywhere. We had the unexpected treat of feeding these guys their dinner by bottle. They were VERY hungry and charged at us if we fed them too slowly. It was hysterical and quite a challenge to feed them! 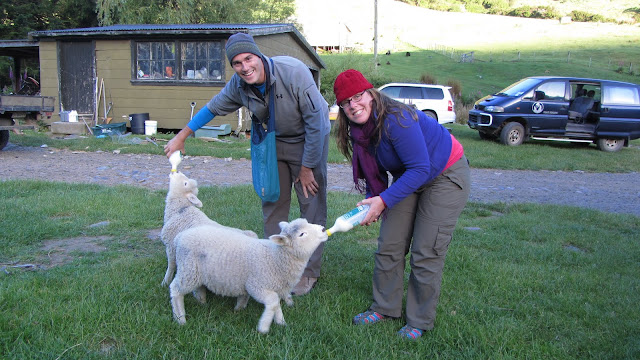 Then, we donned our camouflage fleeces and headed out to see the penguins. This sanctuary has tried to help keep the numbers of these rare penguins increasing by building box nests for them to raise their young. As we walked through the grounds, we got to help our guide count the penguins and check on their progress. Some of them were so fluffy and tiny. 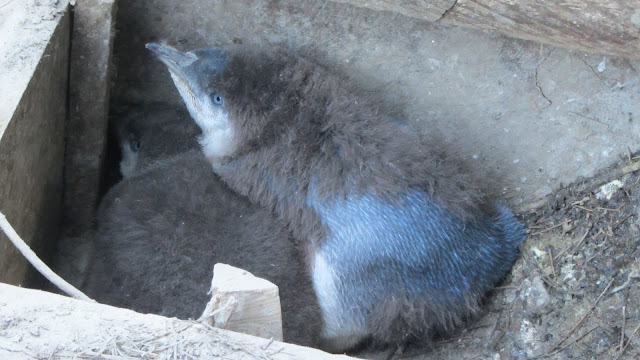 We saw some fur seals swimming near shore and even saw an extremely rare yellow-eyed penguin resting along the rocks. Blue penguins are one of the smallest penguins on earth. And yes, they really are blue! It was fun to see the rafts of penguins gathering in groups for safety in numbers as they approached shore. We didn’t see quite as many as we had thought we would, but it was still really neat to see them in the wild. 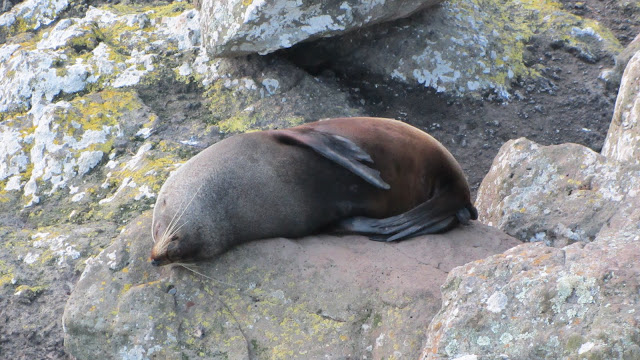 Sadly, one penguin tried to swim to shore, but must have been injured because he couldn’t manage to climb out of the water. Another penguin sensing his distress as the waves crashed him into the rocks, even tried to push him onto shore, but it was so so sad. I don’t think he was going to live through the night. 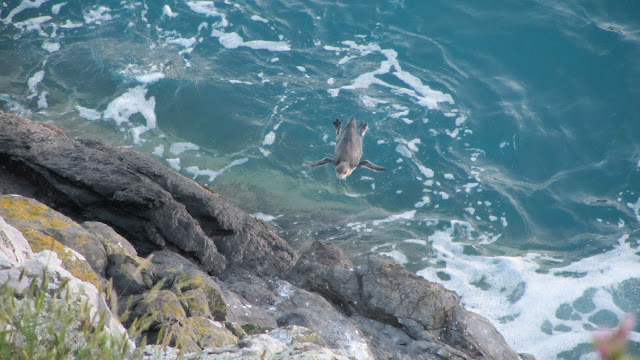 The Canadian couple on the tour with us was staying at the same holiday park, so we gave them a ride back to the park. Since they were travelling in a campervan, my campervan envy was in full force. So, they let us check out their van. It was SO neat. Very spacious and has everything you would need – they even rented one with a toilet and shower! The next day, we went down to the bay one last time and saw a huge cruise ship in the bay. Ray had told us the day before that many of the ships that would usually dock in Christchurch have been diverted to Akaroa since the quakes. Good news for Akaroa, but it brings a HUGE number of people to town. Glad we were leaving town that morning! 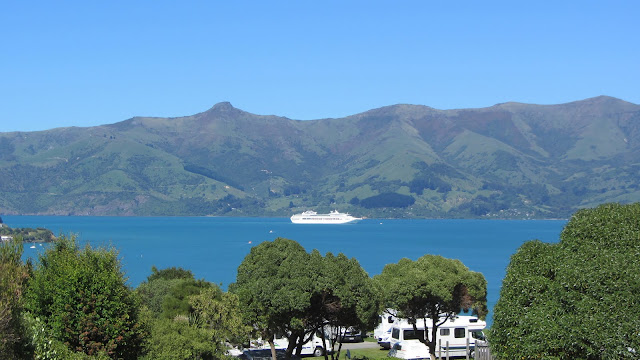 On our way out, we had to make one last stop at Barry’s Bay Cheeses again. They are too good!

Back on the road – next stop Mount Cook!