After a grueling red eye flight from Bali, we found ourselves in our next country – and our next continent! – Australia. We knew we’d be in for a little bit of a culture shock after a few months in Asia, and immediately we felt both out of place and strangely comfortable all at the same time.

Coming from chaotic and confusing Asia, it was strange to be in a country like Australia – where we were no longer the obvious outsiders, where everyone speaks english, and where regulations are strictly observed. If that wasn’t enough, there was the extraordinary cost of the place. Australia was completely unaffected by the Global Financial Crisis, and it’s commodity and mineral-based economy has resulted in a painfully high Australian Dollar. As a result, it’s one of the most expensive places Americans can currently travel. Even Europeans we met were complaining about how expensive it is!

Luckily, we started our Australian travels with what would turn out to be one of our favorite experiences in the entire country – a week-long tour from Perth up the wild west coast to Exmouth.

Terry, the owner/driver/guide/cook and all around great guy from Red Earth Safaris picked us up early our second day in Perth for the big trip. We got acquainted with our busmates and started making our way into the outback. 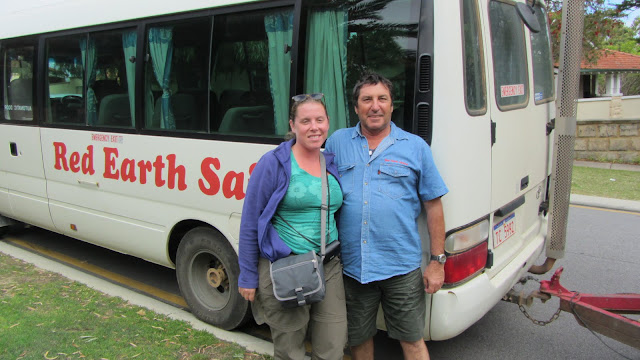 Our first stop was the Yanchep National Park, catching our first sighting of cute koalas and kangaroos. 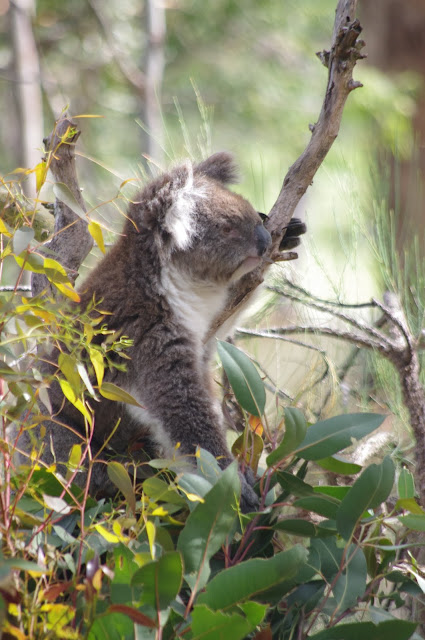 We also went underground to explore a small network of limestone caves. Amazingly, the water here supplies the city of Perth with 100% of its drinking water. Australia is a very dry country, with extremely limited sources of fresh water, especially here in hot and dusty Western Australia. With the water table steadily dropping in these caves, it won’t be too long before the city needs to come up with another answer to its water needs. 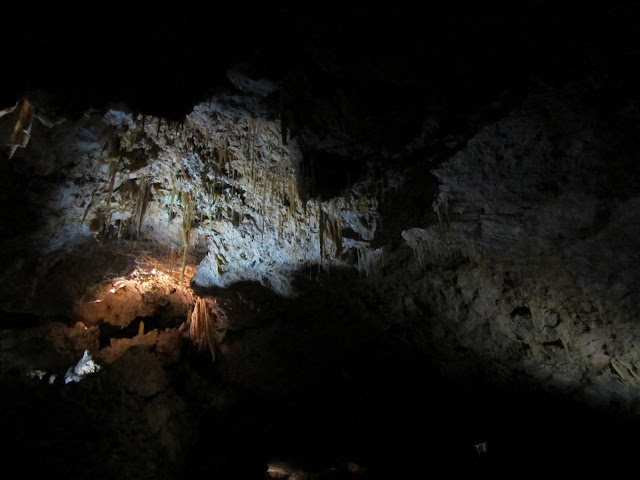 By late afternoon, we pulled into the small beachside town of Cervantes, where we were encouraged by our Kiwi friend Lawrence to run in for our first swim in an Australian ocean! The water was a little chilly, but it would be warming up as we headed further north into the tropics. Lawrence talked us into the idea of having a dip every place we stopped on our way up the coast to Exmouth. 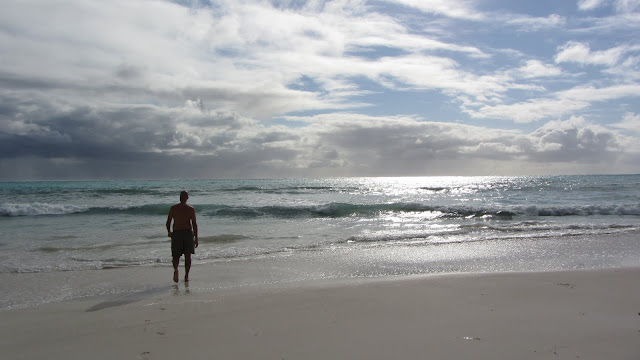 As sunset approached, Terry got us to all pile back into the bus, for a quick stop at the “bottle shop” to pick up some booze and head on to the famous Pinnacles. These captivating rock formations are best viewed at sunset, when the warm, glowing colors and long shadows of the setting sun lend the place a beautiful and other-worldly feel. Terry patiently explained how these unusual formations came to be at least three times, but to be honest we still don’t fully understand it! 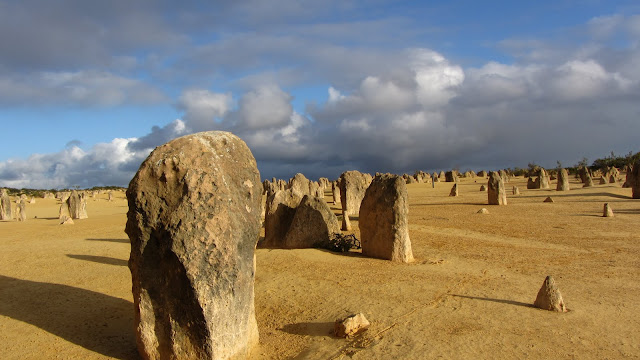 The next day, we were up early and back in the bus again, continuing our journey north. Our first stop was the Greenough Wildlife Rescue Park. Here, we had a blast feeding the mix of grey and red kangaroos. They must have been hungry because they all hopped over and started shoving each other around as soon as we came in! In addition to the other animals, like emus, goats, birds, and even a croc – the real highlight was our introduction to Jack, the baby (what they call a “joey”) kangaroo. This little guy was rescued by a passing motorist on the highway. He was actually found in his mother’s pouch, who tragically was hit by a car and died on the side of the road. His rescuer found Jack and tucked him under his armpit to keep him warm as he drove him to Greenough. Jack took a real liking to Heather, licking her nose and posing for a slew of incredibly cute photos. 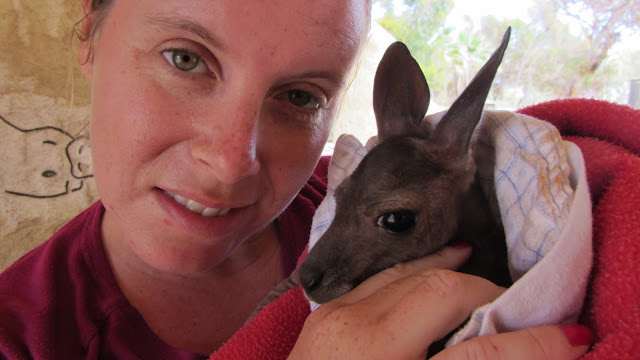 Next, it was time to make our way to the Hutt River Province. This old wheat farm – about the size of Hong Kong – is run by the clever (and very eccentric) “Prince Leonard”. Due to a despute with the Australian government over wheat subsidies, Prince Leonard boned up on international law and discovered his land was never properly claimed by the government. So, he made his own claim and officially separated from Australia, forming his own country – The Hutt River Province – in 1970. This micronation has all the sorts of things you would expect of a proper country, including its own money, stamps, passports, and foreign delegates. We had a blast getting our passports stamped and shown around by the Prince and Princess. 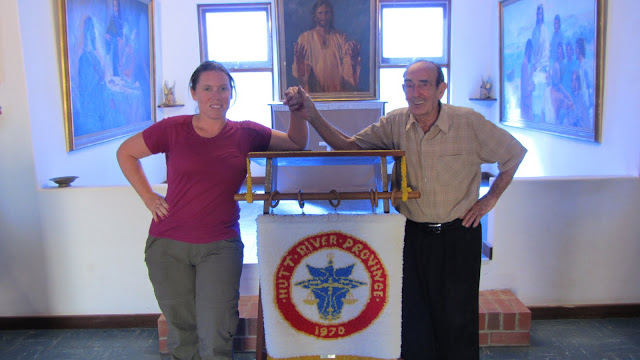 From Hutt River we continued on towards the coast, stopping to admire some magnificent cliffs near Kalbarri. Terry even pointed out a couple migrating whales making their way past this picture-perfect lookout. 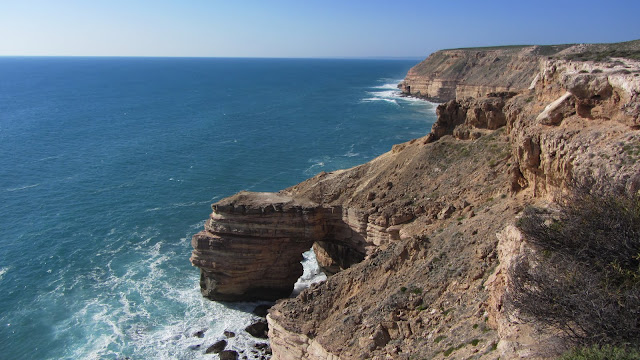 In Kalbarri, we once again took a quick dip in the ocean, determined to swim at every stop on our way to Exmouth! We returned to our hostel to find Terry busy at work cooking up a delicious dinner on the “barbie”. He started by offering us a taste of kangaroo meat. After Heather’s close connection with Jack the joey earlier that day, she just couldn’t bring herself to try it. I did, though…and what can I say…not only are they cute, they are also quite tasty!

The next day we got an early start and headed to the nearby Kalbarri National Park, for a hike down into the stunning Z-Bend Gorge. This 80-km long gorge was carved out by the Murchison River, through sandstone that is hundreds of millions of years old. Terry led us on a walk to the bottom, where we cooled off in the river water. We looked on us a few brave souls from our group decided to abseil into the gorge. 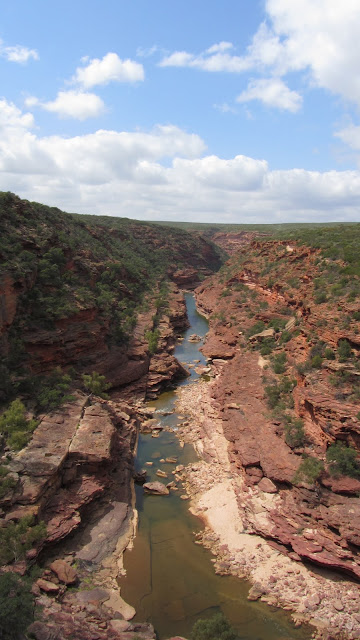 From Kalbarri, we pressed on through the outback towards our next destination – Shark Bay. This world heritage area is home to large, shallow bay, hosting a huge variety of underwater life, including dugongs (a sort of manatee), turtles, rays, dolphins, whales, and (as the name suggests) lots of sharks. We stopped at a few lookout points, spotting migrating whales passing in the distance, and the outline of sharks swimming closer to shore. 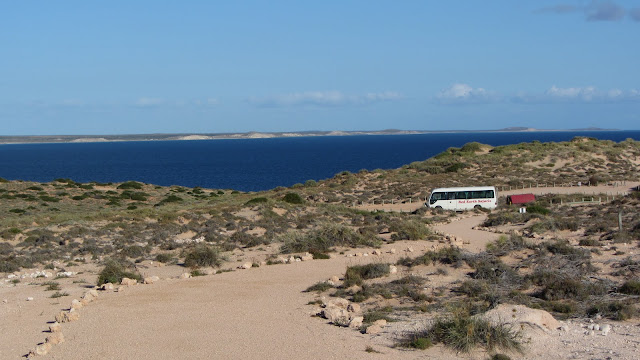 That night, we pulled into the small town of Denham – Australia’s western most settlement. Keeping to our commitment to swim in the ocean everyday on our trip up the coast, Lawrence and I waded in to the warm tropical waters. Everyone else from the group was a little too freaked out by all the sharks, though luckily we didn’t spot any while we were in the water! 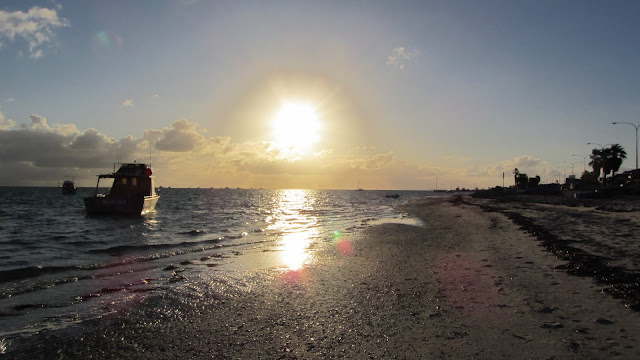 After dinner, we decided to check out the local pub, which has the distinction of being the westernmost pub in Australia. Walking into this small country pub was like something out of the cantina scene in Star Wars. We grabbed drinks and tried to keep a low profile, though it was pretty clear we weren’t blending in with the locals. 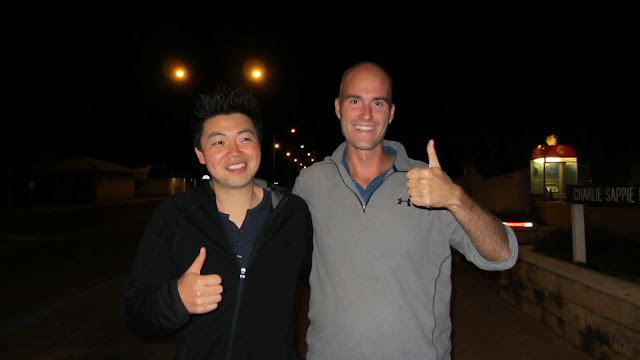 There was an empty pool table, so we put together a few coins and bought a game. Out of nowhere, one of the large, beer-guzzling regulars moved in and said, “This is my table. You have to beat me first if you want to have it.” We tried to politely back out, but this local – who called himself “Moose” – pushed on and before I knew it, Lawrence and I had teamed up to take on “Moose” and his friend, “Powerade”. Now, I have to admit, neither one of us is really any good at pool, but luckily neither were the locals. After a number of epic and nail-biting moves, both teams made it to the final eight ball. We missed an easy shot, lining up the ball for the other team to tap in to the corner pocket. Figuring it was over, we started shaking hands and exchanging pleasantries. Then, miraculously, the locals scratched the cue ball, and we won the game! They did not look too happy about these out-of-town punks dashing in and beating them out of their table, so instead of hanging around a minute longer, we all downed our drinks and quietly made our way out of the pub…