The small, idyllic Gili Islands, were one of the things we were most looking forward to in Indonesia. In fact, I’d go so far as to say these were one of the top things we were looking forward to in all of Southeast Asia! Before we had even set off on our trip, we had heard gushing reports of these tropical paradise islands, just off the coast of Lombok, Indonesia, which have become a fixture on the backpacker “Banana Pancake” trail through the region.

As they are tiny, sand islands (just a few miles in diameter at max), there are no cars or motorcycles in the Gilis – a nice break from the hectic moto-filled streets found everywhere else in Indonesia. The islands do not have any significant fresh water resources, so until tourism recently developed here, they were uninhabited. Now, a population of Sasak people from nearby Lombok live on the islands and cater to tourists. 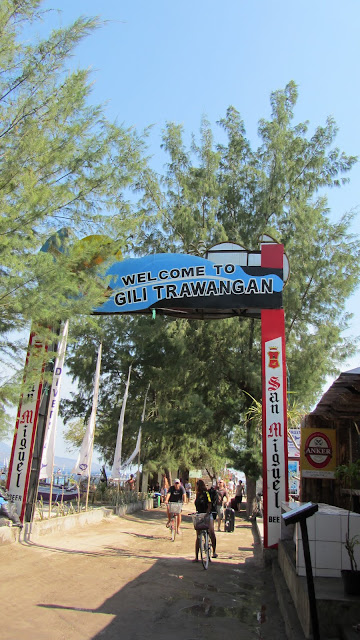 The Lombok strait, separating Bali, Lombok, and the Gili Islands, is renowned for its rough, tumultuous waters, plied by ill-equipped Indonesian boats and crews with insufficient training. We immediately ruled out the public ferry option, which would have involved an uncomfortable 12-hour journey on a rusting, old ferry, followed by bus, and another local ferry. Luckily, “fast boat” companies have been setup for tourists, which make the crossing using speedboats in less than two hours and drop you off right at your requested island. That’s more like it. 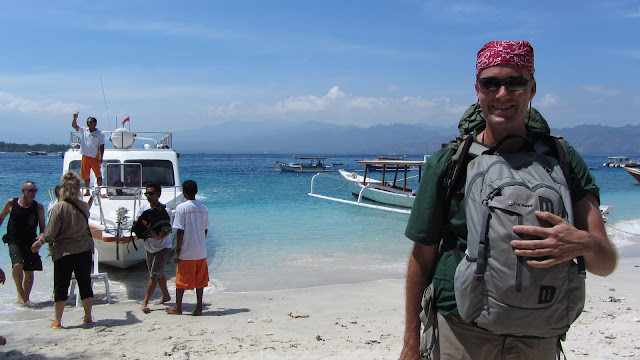 We decided to start with Gili Trawangan, the largest and most-developed of the Gilis. A steady stream of backpackers, plethora of bars, absence of police, and abundance of drugs have earned Trawangan its reputation as a party island. 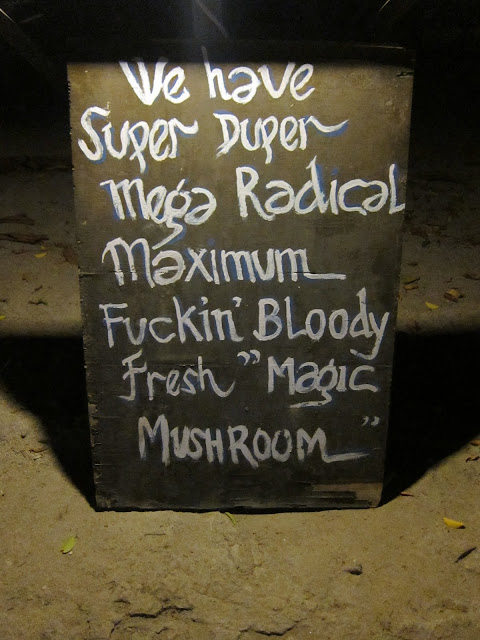 It’s recently begun to clean up its image, though, and these days fancy restaurants and resorts are popping up at a steady pace.

Our first thought on Gili “T” (as it’s known) was, “yikes! it’s busy here!” We knew it was high season, but we weren’t fully prepared for the throngs of people roaming the island. Since we didn’t have reservations for a place to stay, we started working through some of the suggestions in Lonely Planet and Wikitravel. Nearly everything was booked or astronomically expensive. 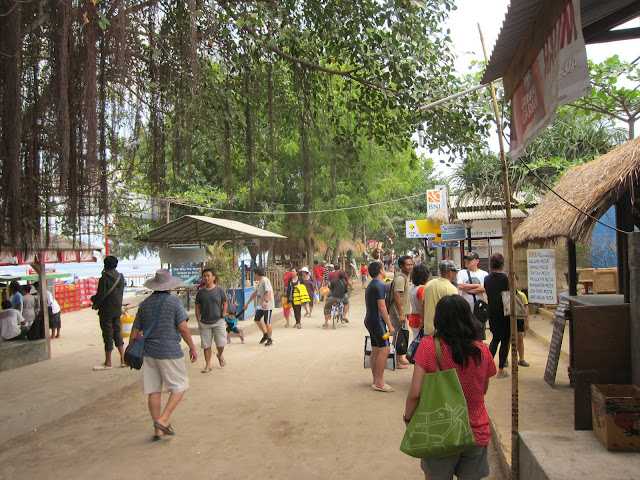 Finally, we found space at a scruffy-looking guesthouse tucked away towards the back end of the main town. At 150,000 Rupiah (US $16.50), it was still a bit expensive for what it was, but hey, we were desperate. After an uncomfortable night’s sleep on suspicious blood-stained sheets along with mice running around the room, we packed up quickly the next morning and looked for another place to stay. Hoping to beat the early Bali fast boats, we found a much nicer, clean, and mouse-free place to stay on the North-Eastern side of the island. At 500,000 Rupia (US $55) it was expensive. As we were quickly finding out, the Gilis are no longer the cheap, backpacker haven we had heard so much about. 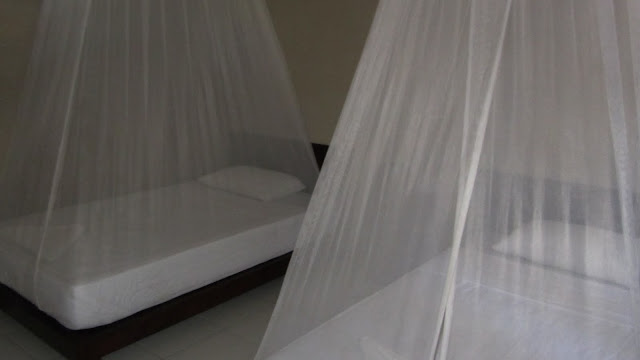 Sure enough, the glitzy resorts, fancy bars, and expensive restaurants are taking over Gili Trawangan. We couldn’t believe how much we were paying for things that everywhere else in Southeast Asia were a third or half as much. The word is out on Gili T, and with the mad rush of sun-seeking holidaymakers now making the quick trip here from Bali, backpackers are getting squeezed out of the island paradise they discovered and popularized. 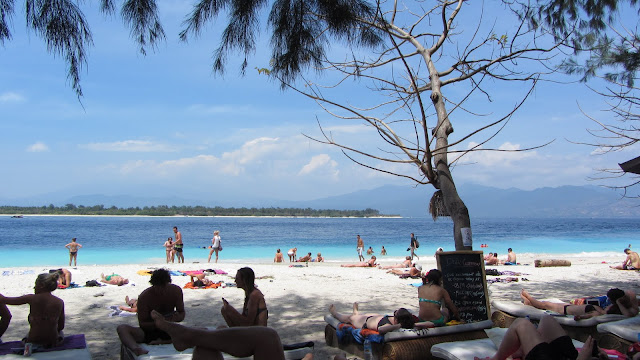 But, all is not lost on Gili T, and there is no doubt this island is popular for good reason. For a start, the island is surrounded by beautiful beaches. 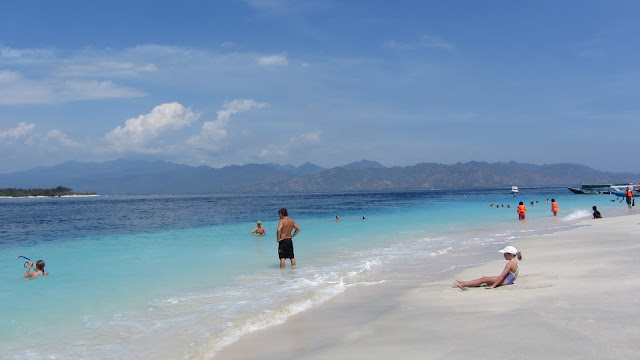 Then, there are the turtles. The islands are home to a sizable population of green and hawksbill sea turtles. We were thrilled to see half a dozen of these magnificent creatures while snorkeling off the beach one day. 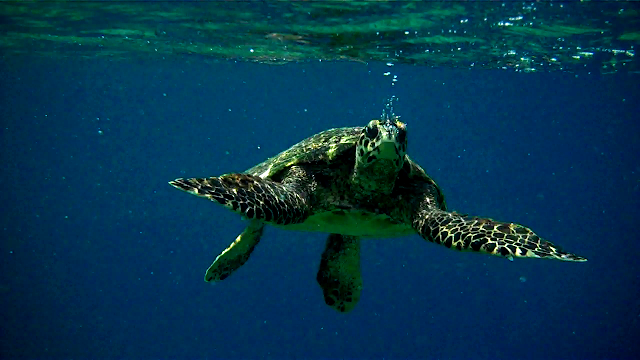 Encouraged by our close-encounters with the resident turtles, we took one of the popular glass-bottom snorkeling tours around the three Gilis. The tour was terrible – with approximately 60 people loaded onto a boat probably designed to hold 20 – and an experience we would rather forget. 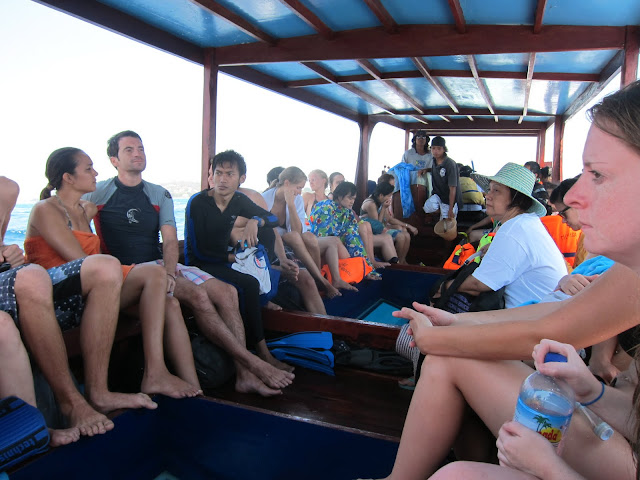 One good thing came out of this, though. The captain dropped us on Gili Air for lunch (directing us to a place he would get a kickback), but instead of getting corralled into the designated eatery, we decided to take a walk and explore this smaller island. With much fewer people crawling around, beautiful beaches, and a collection of cool-looking restaurants about, we decided this might be the Gili for us.

So, a couple days later we packed our bags and set off on the first public boat across to Gili Air.