After four exhausting days of nonstop trekking through the Salkantay Pass, we finally made it to Aguas Calientes, the small town which is the launching point for tourists visiting Machu Picchu.

We celebrated the end of this difficult accomplishment over dinner and drinks, but still hit the hay early; we faced yet another early start the next morning to be first in line to these world-famous ruins.

Each day, a group of die-hard tourists wakes up early before the sun rises and hikes four miles straight up the Inca stairs from Aguas Calientes to Machu Picchu, nestled at the top of a steep mountain. There are two reasons to partake in this insanity: 1) in order to see the sun rise over the ruins and enjoy the site without thousands of other tourists crawling over it and 2) to receive one of the strictly limited tickets to climb the Wayna Picchu mountain, to get the best view of the entire city. 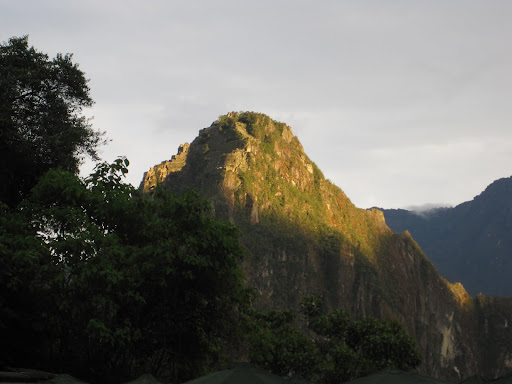 The alarm interrupted our first night of sleep in a real bed at the ungodly hour of 4am, the time which our guide, Eddie, had told us he would meet us and hand over our entrance tickets. Unfortunately, Eddie was no where to be found, and our group started to panic, fearing we would be late to the gates and not get to climb Wayna Picchu. After pounding on his door for almost 15 minutes, we finally got the attention of another guide, who was able to hand us our tickets.

Already behind schedule, we turned on our flashlights and started the walk in the dark through town and up the Machu Picchu mountain. The climb was exhausting, and within a few minutes we had shed our warm clothes and started to sweat. We took a few stops along the way to the top, but kept the pace up in order to be one of the first in line. Luckily, we made it with plenty of time to spare, and cooled down at the top (we were literally steaming in the cold weather!). 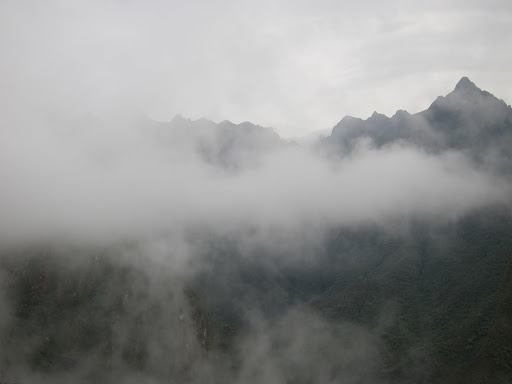 We collected our tickets to climb Wayna Picchu and passed through the entrance gates, passing near the caretaker’s hut and catching our first sight of the city, still covered in morning clouds and mist. 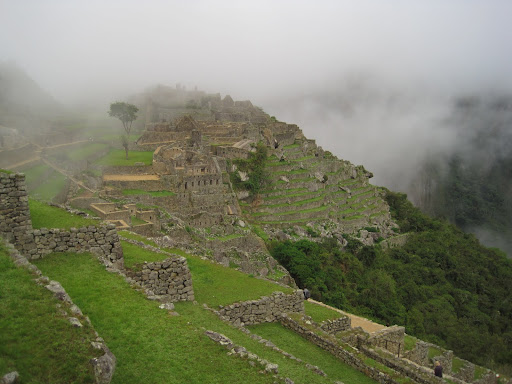 Machu Picchu was built at the top of a remote mountain around 1450, and is thought to be either a sacred religious site or the country estate of an Incan ruler. Either way the site was abandoned sometime around the arrival of the Spanish conquistadores 100 years later. Thanks to it’s hidden location, the Spanish never found the city. While it was known by local people, the city was not “found” again until Hiram Bingham of Yale University visited the site in 1911, as part of a National Geographic exhibition meant to find the lost Inca city of Vilcabamba. It is considered one of the best-preserved Inca archeological sites in existence. We were given a tour around the site, where we admired the precise stonework, steep terraces, and sweeping views. 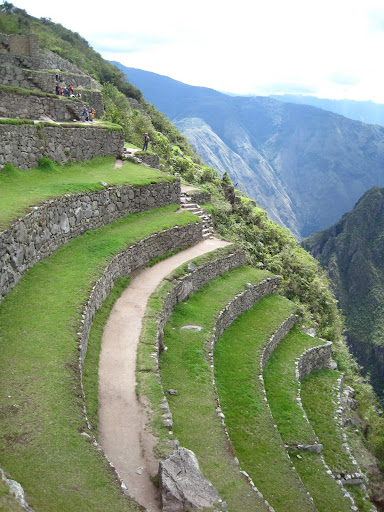 An interesting thing we learned was that the whole city is sinking gradually, subsiding under the weight from the steady stream of tourists climbing over the ruins. 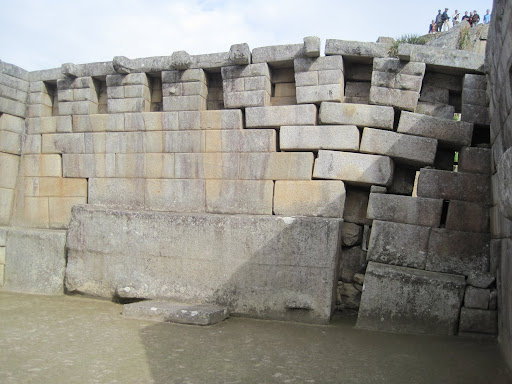 After a couple hours, the clouds had lifted and we were ready to climb the Wayna Picchu mountain towering above the site to get a better view.

It was a tiring and tricky climb to the top. At points, we had to grab on to guide cables and shuffle up narrow stairs to get up the steep mountain. 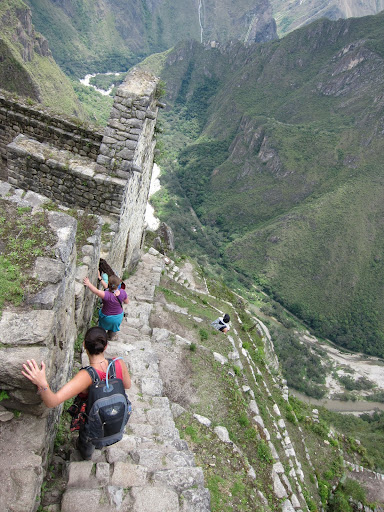 It was all worth it for the amazing views, though. We took a number of photos of us above the ruins, perched precariously on the edge of an old stone wall. 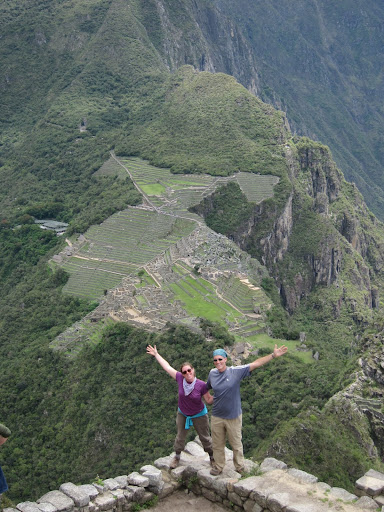 After catching our breathe and snapping a ton of photos, we began the vertigo-inducing descent. At some points we had to hug the mountain and go down on all fours.

We spent a little more time at the sight, exploring the rest of the ruins on our own. 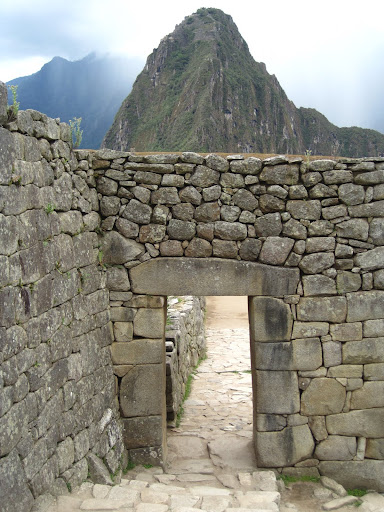 And of course, we captured the classic Machu Picchu shot, with Wayna Picchu in the background. 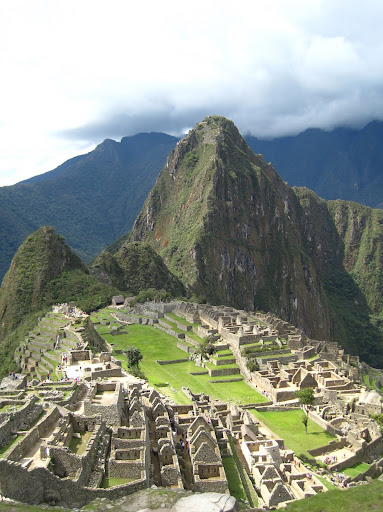 By mid afternoon clouds had rolled in and we heard thunder in the distance. Tired, aching, and hungry, we decided to head back to Aguas Calientes for a bite to eat before catching the train back to Cuzco.

1 thought on “Machu Picchu – The Lost City of the Incas”