After an incredible few days, we were sad to say goodbye to Mount Cook. We had one last breakfast with a view and took another drive to the visitors’ centre. We learned of all of the sad stories of climbers who have lost their lives on the mountain. People from all over the world have died climbing Mount Cook. There, we also learned more about the area’s glaciers. They are disappearing and fast. Like most glaciers worldwide, 30 kms of the glaciers on Mount Cook have melted. Just staggering.

We set out for the long drive to Oamaru. As always, the scenery was spectacular along the way. For lunch, we found a beautiful spot among gorgeous pink and purple flowers. We watched glider planes sway down above the mountains. The drive took us past the stunning Lakes Benmore and Aviemore. They were the brightest most turquoise lakes you can imagine. We also saw three large dams along the way. I have to say, New Zealand is perhaps the most eco-friendly, eco-conscious, clean country we have been to. It was truly a pleasure to see how much this country respects the Earth. I wish the US would take a lesson from them. 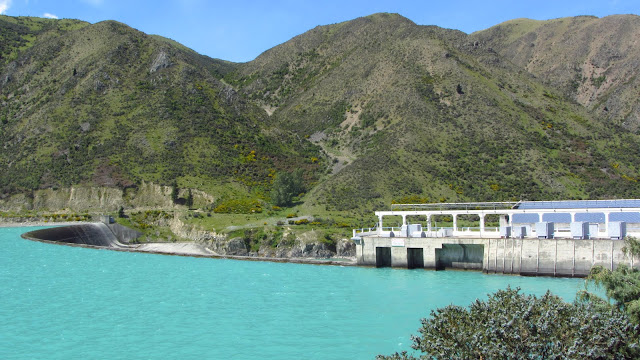 Around 4:30pm, we arrived in Oamaru. Though a bit out of town, we checked into the Waitiki Holiday Park. Since there were not many people staying there at all, it was very quiet and peaceful. We had a lot of space to ourselves, clean bathrooms and a nice kitchen. At just $22 a night for a tent site, it was one of our cheapest nights in all of our NZ/AU roadtrips. 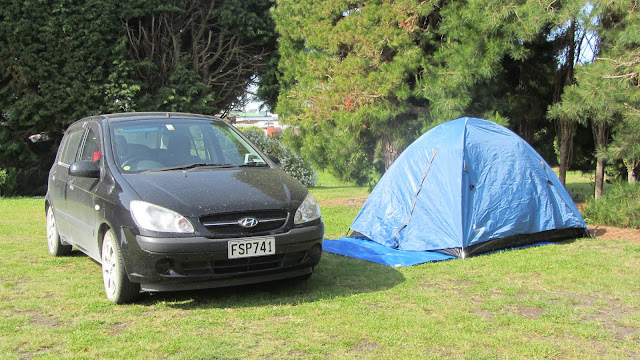 After setting up the tent and settling in, we took a chance and drove to Bushy Bay to see if we could find some yellow-eyed penguins. We arrived around 6:30pm, too early for penguins as they usually come in at dusk, and had no luck seeing any. Then it was back to town for shopping for some more provisions and we grabbed a couple of yummy sandwiches at Subway. Oddly enough, we were able to find Subway in nearly every country of our time in SE Asia, New Zealand and Australia. Ah, the comforts of home. Sometimes, you just need to do it. 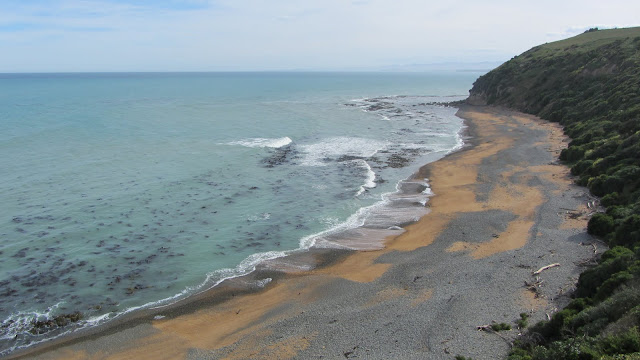 Then, the big dilemma – to pay or not to pay. We love penguins. I mean we really love penguins. Since Antarctica, we really have grown to love these little guys. But, in New Zealand, the tourism industry is quite aware of this common love, and they charge beaucoup bucks for this kind of experience. Even though we did see the little blue penguins in Akaroa, we had heard that the colony in Oamaru is one of the easiest ways to see many of the these beautiful blue birds. 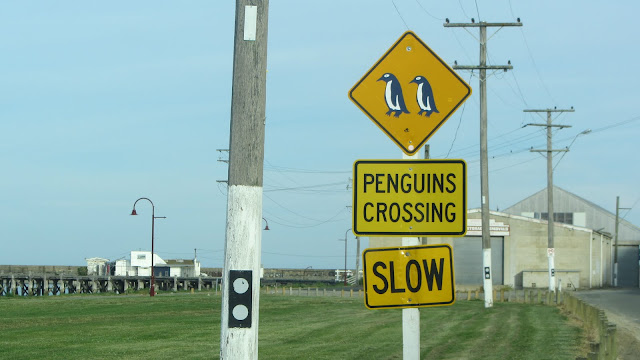 Since we were only in Oamaru one night, we decided to splurge. With our Top 10 card, we were able to get a 10% discount, but still paid $40 NZD (around $30 USD). I guess compared to the costs of other activities in New Zealand, it really wasn’t that bad. We knew what we were getting into and it was very, very touristy. 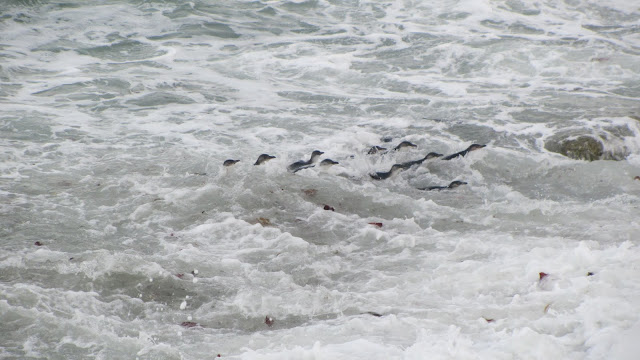 The building is set up on a former quarry. Once the quarry was no longer being used, little blue penguins began coming ashore and nesting among the hills. Once conservationists realized this, they began building nesting boxes and now a colony of around 200 penguins calls this area home. After paying the admission fees, we saw the “no camera” signs. I think it’s pretty ridiculous for them not to let you take photos after paying that much money for such a special nature experience. I understand the “no flash” policy, as it disturbs the animals, but if you are able to photograph them without a flash, I see no reason why they should forbid people from taking photos. 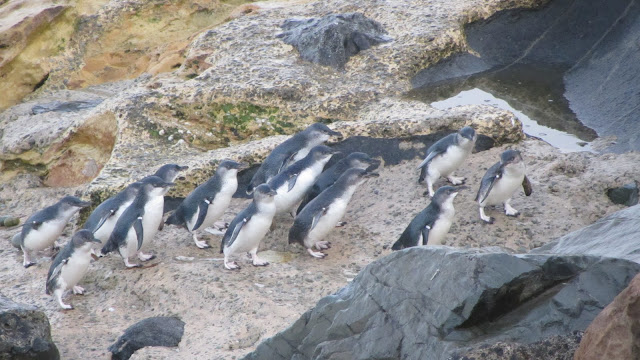 It was still quite light out when we arrived and as luck would have it, the penguins started coming to shore much earlier than advertised. These guys are on their own schedule – it is nature after all. So, before the staff were stationed at their posts, I was able to snap a few non-flash photos of these adorable little ones. They really are small, and stand just under a foot high, many of them much smaller than that. 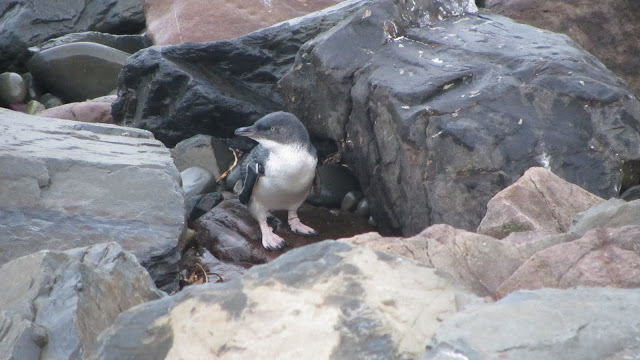 During any given day, these penguins can swim up to 50 kms. They leave their chicks cozied up in their nests and go out for the day to feed. At dusk, they return to give their young a nice meal. We were very lucky that night, and saw 158 penguins. The staff said it was a great night for penguins! We even saw a few breeding right in front of us, and they weren’t shy about it. Penguins are very sweet and they even cuddle and hold each other afterwards. Aw… (It’s true!) 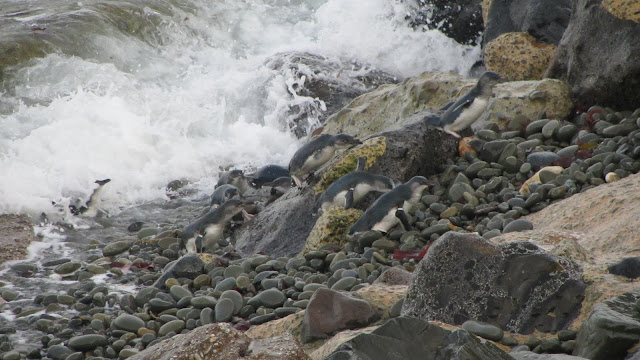 We got to talking with some of the staff and stayed late watching the penguin colony. It’s so wonderful to hear them and see them in action. When we left, we did in fact see many penguins in the parking lot. As we had read online, we could have just bypassed paying and just sat in the parking lot and we still would have seen several penguins! Ah, hindsight. I was very careful not to hit any of them as we left the parking lot. They even have cute signs reminding you to check underneath your car for penguins before pulling away. 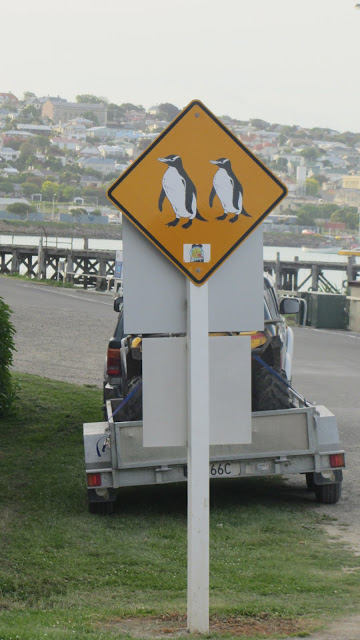 Then, we drove back to the holiday park and settled into our tent. It didn’t seem that cold, but overnight, it really got brisk. I even had to resort to sleeping in the car, which turned out to be not that much better. I awoke to Erik knocking on the car door wondering what the heck I was doing sleeping in the car! Rough night, to say the least. I was very out of it, but when I went to the bathroom, I realized the vision in my right eye was very blurry. I blinked a few times, but it was still terrible. I started to freak out. Erik tried to calm me down saying it was probably the weird way I slept in the car or my sinuses or something. I was really freaking out. I layed down in the tent and slept for two hours. When I woke up, my vision was nearly back to normal. Whew… that was weird.

Before heading out of the holiday park, we walked down to the beach which was just a few hundred meters away. There wasn’t really much to see there, but we did pick up some beautiful paua shells. They are stunning. I cannot wait to make some beautiful jewelry out of them. 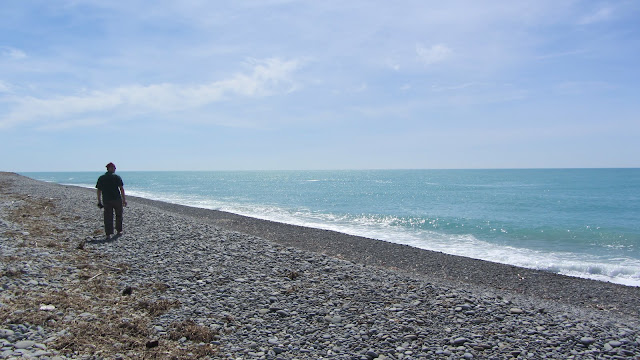 We drove back to town to get a map of the architectural buildings in town. Oamaru is very famous for its gorgeous historical limestone buildings. 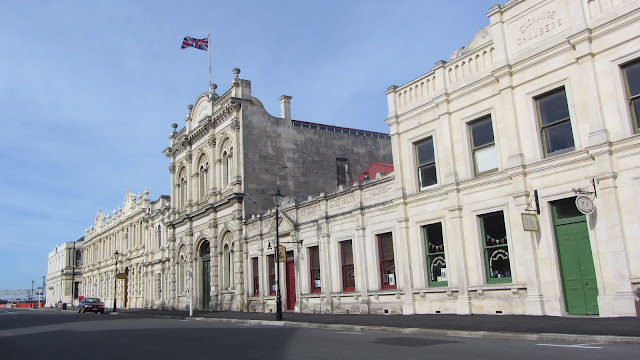 After perusing the brochures and getting a map, we watched a 10 minute film on the town, its history and its architecture. Without realizing it, I left my glasses case with my prescription sunglasses inside. As we left and entered the bright sunshine, I realized I didn’t have my sunglasses. We hadn’t been gone but 2 minutes and when I went back into the theatre, they were gone! I then remembered that I had seen a woman go into the theatre as we were leaving. For the next 10 minutes, we frantically searched the info center and shop looking for my sunglasses (they were prescription glasses and the only ones I have). After a few minutes, the same woman I had seen go into the theatre waltzed in and told the girls at the desk that she had “found” my glasses. Even though a few minutes before when I asked her if she had seen them, she said No. I presume she had tried them on, realized they were prescription, and then brought them back. This made me so so angry. Because I know she was the only other person that went in the theatre after us! UGH! But, anyway, I got them back. 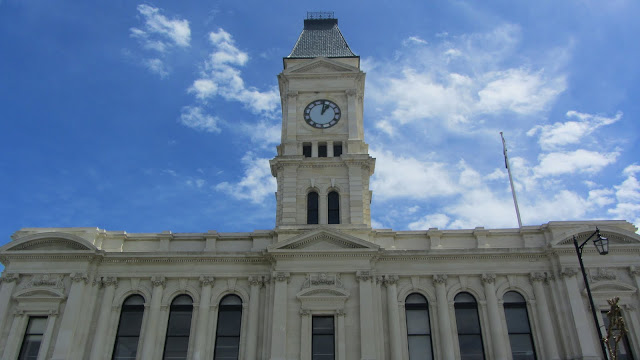 Then, we went on a nice self-guided tour of Oamaru’s historical buildings. They really are gorgeous. Erik saw this odd building with a huge steam engine from a train displayed outside. It turned out to be this odd steampunk museum. It was a mix of all of these strange objects, many of them were lit up in colored lights and had moving parts. Very odd and frankly not worth the $10 entry fee each. 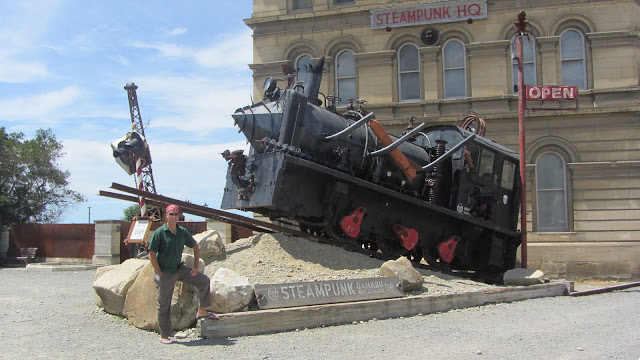 We hit another cheese factory, this time the Whitestone Cheese Factory. We tasted their camambert, the Farmhouse cheddar and their award-winning Windsor Blue. I don’t even like blue cheese, but theirs was phenomenal! 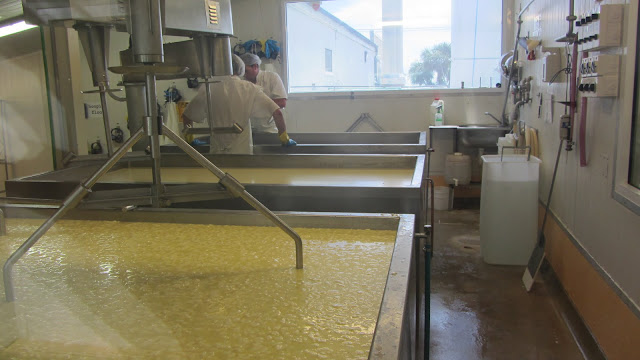 Then, it was back in the car and onto Dunedin!