After our fantastic whirlwind tour in Tortuguero, we decided to pass through the beach-jungle town of Cahuita. This place had a real chill, Rasta-vibe and was a great place to relax for a couple of days. Cahuita is unique in that the jungle comes right up to the beach. Since we had just seen incredible wildlife in Tortuguero, our main focus here was to chill out. We enjoyed the beaches, took a walk to a farther beach, Playa Negra, and found a coconut along the way that Erik managed to crack open for us. Yum! Once we got to Playa Negra, we practically had the beach to ourselves and enjoyed some cold beers at an oceanside bar. 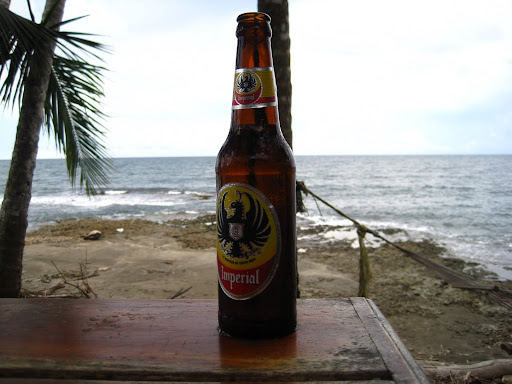 The first night there, after asking if there were monkeys around as we checked into our hotel, we quickly realized there were. We heard the howler monkeys howling and it sounded like they were close by.

As we were walking, we saw two monkeys in a nearby tree. Then, we followed more howls and saw several more monkeys; they were the closest that we’d ever seen them. We got really close to one friendly guy who seemed to fancy being photographed. 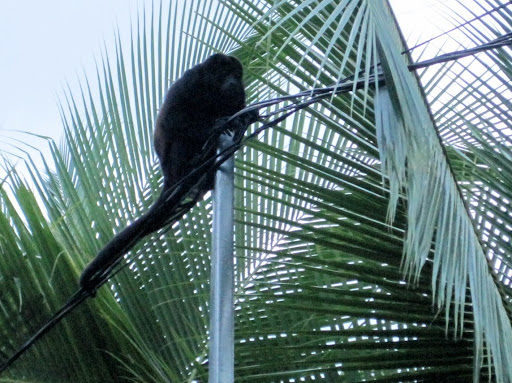 Another main draw of Cahuita is the jungle that borders the beach, which is the National Park of Cahuita. One morning, we decided to explore the Park very early, since that’s when you can see much of the jungle animals come to life. We got to the park entrance which is right in town on the beach and paid our donation to enter. We had a nice walk and saw a toucan, a sloth and some howler monkeys (no snakes, thank goodness!). We were about a half hour into the walk when the sky started to look a bit grey. I was doing some silly jumping jacks and asking Erik to take some photos, and kept telling him it was fine. Although there was much more of the park to explore, the threatening skies made us want to start to head back. 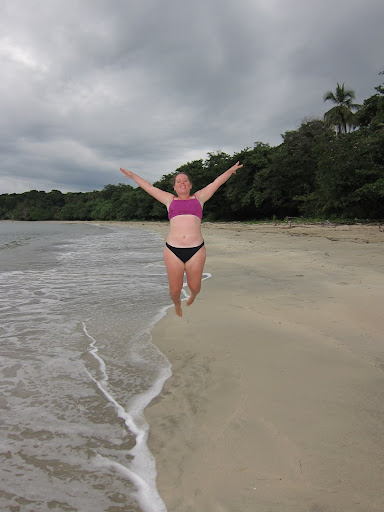 Then, we heard monkeys overhead. I started to video them and wondered why they were being so active and vocal. At this point, we had seen so many monkeys that we were sort of “experts.” Then, all of a sudden, the skies opened up and it started to pour. A fierce thunderstorm was ripping through the jungle and we had nowhere to hide. On the way in, we had passed a few small metal shelters that covered barbecue grill areas. We remembered this and decided to make a run for it. We were soon joined by two other girls who were also soaking wet. At first, it was exciting and amusing and I took a video of the storm with the howlers screaming in the background.

Every few minutes, people who were also stuck in the jungle would run past us. We were trying to decide which way back to safety was better – running through the jungle where a tree could fall on us or run along the beach where we could get struck by lightning. Our choice would soon be made for us as we heard a loud cracking sound and a large tree not far from us fell to the ground with a crackling crash. We were outta there.

We ran through the storm and pouring rain as fast as our legs could take us. I was crying I was so scared. We finally make it back, with our hearts practically jumping from our chests. I’m not quite sure it was worth it, but we did get some good footage of the monkeys. And now I knew what they were howling about.

You can see more photos from Cahuita in the gallery.