Some years ago, while on a trip to Las Vegas with my buddy Ken, I decided we were going to bungee jump. Right there, right then, with no excuses. I had heard of an AJ Hackett bungee location next to the Circus Circus casino, so without giving ourselves any time for second thoughts, we hopped in a cab and made our way to the platform. When we arrived at the 171-foot tower, we noticed that the gate was locked, the grass was overgrown, and nobody was around. The Las Vegas branch of this world-wide chain of bungee jumps had been shut for good.

I was disappointed. Secretly, though, I was also relieved.

You see, bungee jumping scared the living crap out of me. Before committing myself to a bungee jump, I had previously taken up sky diving (twice), flying small aircraft, zip lining, and a host of other “scary” activities. But nothing left me shaking in my boots as much as taking a giant swan dive off the top of a tall object with nothing but a rubber band tied around my ankles. Should something go wrong, it seemed like the outcome would be far more gruesome with bungee jumping. And the “ground rush” effect of jumping so close to the ground only reinforced that feeling.

Still, I couldn’t shake the idea. I had to bungee jump. To overcome this fear. To prove it to myself.

New Zealand, I decided, would be the perfect place to take my first plunge. And Queenstown, the adventure capital of the world, was where I would do it. 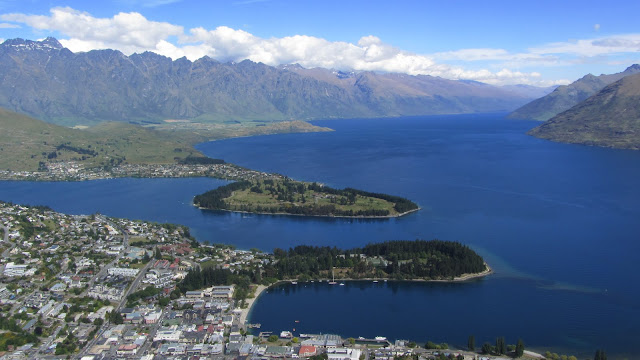 AJ Hackett is the man that popularized bungee jumping in the 1980s. Inspired by Pacific-Island Vanuatu natives which ritualistically jumped from wooden-platforms with vines tied around their ankles, along with the early jumps by the Oxford University Dangerous Sports Club in England, Mr. Hackett brought bungee jumping to the world. After performing his first personal jump off the Auckland Harbour Bridge, he later performed stunts all over the planet, including an illegal jump from the Eiffel Tower. In the late 1980s, AJ Hackett formed a company and started the world’s first commercial bungee jumping center at the Kawarau Bridge outside Queenstown, New Zealand.

To this day, thousands of intrepid visitors every year still hurl themselves off the 43m (140 ft) Kawarau Bridge. What better place than the birthplace of modern-day bungee jumping for me to take my first jump? 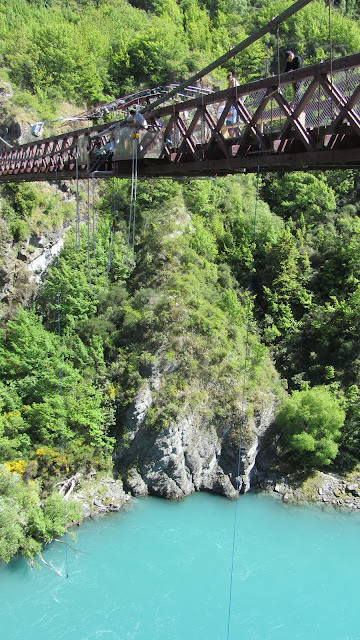 We walked into the AJ Hackett center in central Queenstown, where they swiped my credit card, wrote down my details, and scheduled my jump at the nearby Kawarau Bridge. I decided to make a reservation for two days in the future, on the auspicious date of 11 December, 2011 at 11:00AM. Eleven was either going to be my lucky…or unlucky number. 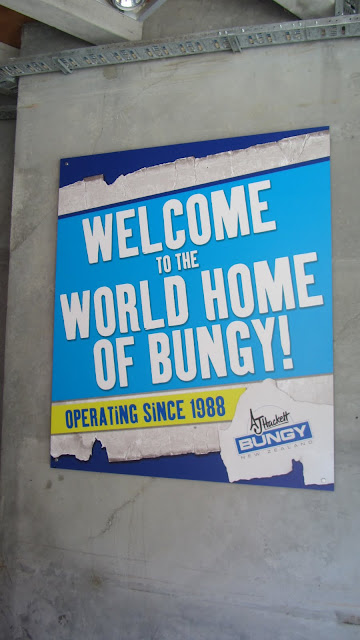 The worst part of a bungee jump is not the jump at all. It’s waiting to jump. In retrospect it was a bad idea to schedule my jump so far in the future.

I spent the next two days obsessing about this jump. Imagining the sensation of standing at the edge of the platform. The wind rushing past me. The initial dive and acceleration.

My palms were getting sweaty just thinking about it and I was too excited to sleep. I read previous jumpers’ tales of fun and failure. I was the most excited and most terrified I’ve ever been – all at the same time.

Finally, jump day arrived – a beautiful, sunny, Sunday morning. We drove out to the bridge, only 15 minutes outside of Queenstown. As we stepped out of the car we heard the scream of a bungee jumper echoing through the canyon walls. 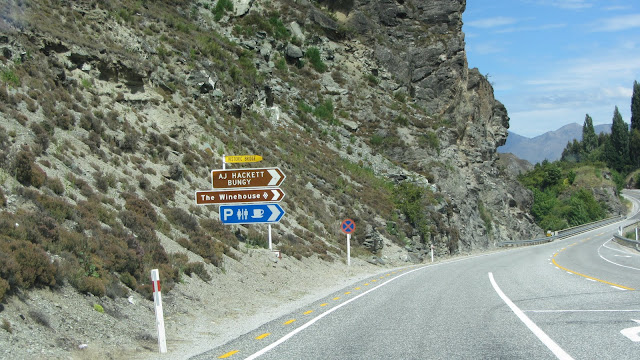 We entered the visitor center, where I signed my life away, and stepped on the scale to be weighed, and then re-weighed. They scribbled my weight onto my hand with a magic marker and sent me out to the bridge.

Heather joined the spectators at the viewing platform set up on one side of the gorge. Bungee jumping is not her cup of tea, but she would help out by filming and photographing the event. 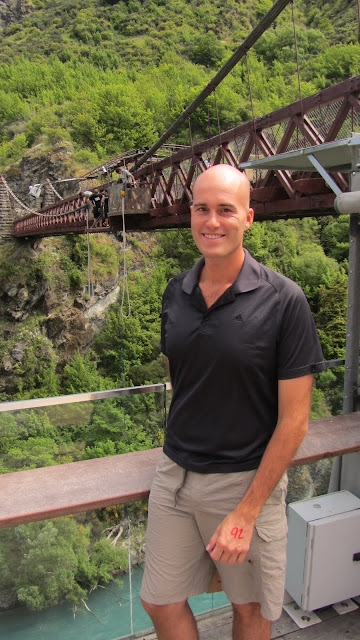 On the bridge, I was fitted with a waist harness. The straps were pretty loose, and I was a little worried the staff might have overlooked something. They assured me everything was fine and told me to stand in line behind the other jumpers.

I watched as one-by-one jumpers took the plunge off the bridge. Some people were extremely nervous and required a pep talk, others just went for it without thinking twice.

In front of me, a young Indian couple were gearing up to take a tandem jump together. I chatted with them while we were in line – it was their first jump and the guy seemed a little more enthusiastic about the whole thing than his wife.

With their ankles tied up and all ready for them to inch their way to the edge of the platform, the girl started freaking out. It turned out she had recently had Lasik eye surgery. The jump masters advised her not to jump, but told her it was her decision whether she wanted to or not. She decided to go for it anyway. They got up and made their way to the platform. Then came the count. 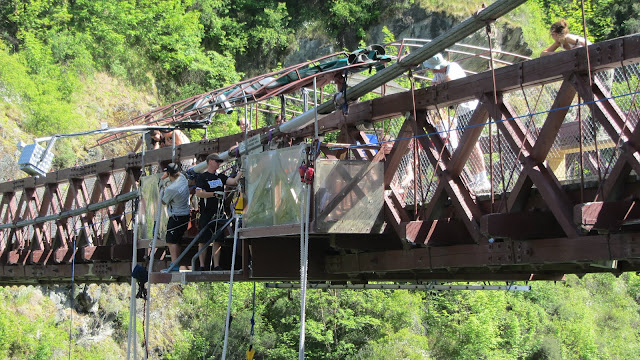 And nothing. They were paralyzed. They sat down again – still tied up – and discussed it between themselves and the jump masters.

All this anticipation was killing me. I was ready to push them off the edge!

Finally, they decided to chicken out, and before I knew it I was sitting down on a small area of the platform, with my ankles getting a towel wrapped around them and the bungee cord attached.

The jump masters asked me if I wanted to get dunked in the river water below. At first I thought I would just go for a “light touch” in case they screwed up the calculations. The guys convinced me I should go for the full dunk, though, so I decided to go with their recommendation. 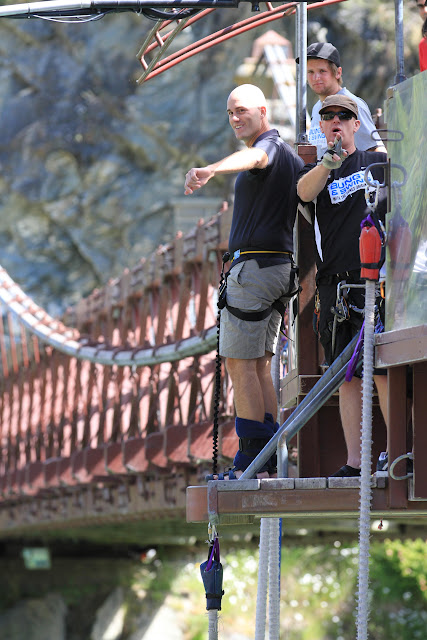 At this point, I was pretty excited. It hadn’t hit me that I was going to actually jump yet. Next, they had me stand up and waddle over to the edge of the platform.

When they threw the bungee cord over the side and it saw it unfurl down below it finally hit me. This was real. I was doing it! And there was no backing out! No, sir, I was not chickening out like the Indian couple. 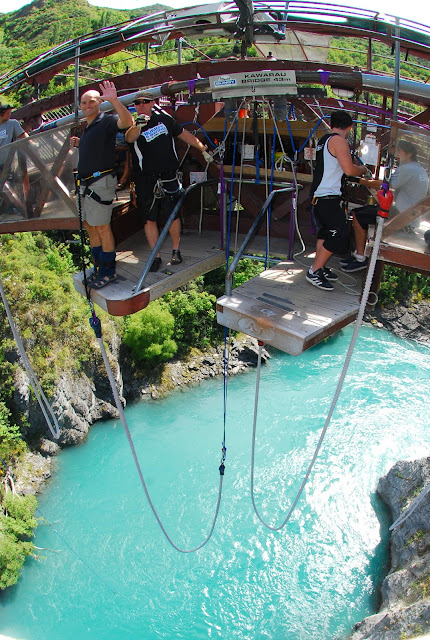 With a big smile, they had me wave to the cameras. Then they counted: 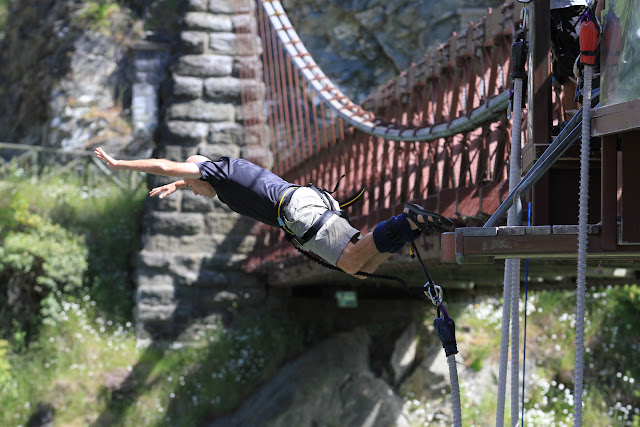 Without a moment’s hesitation I jumped off toward the horizon, screaming as I flew threw the air with the beautiful turquoise river rushing up towards me. 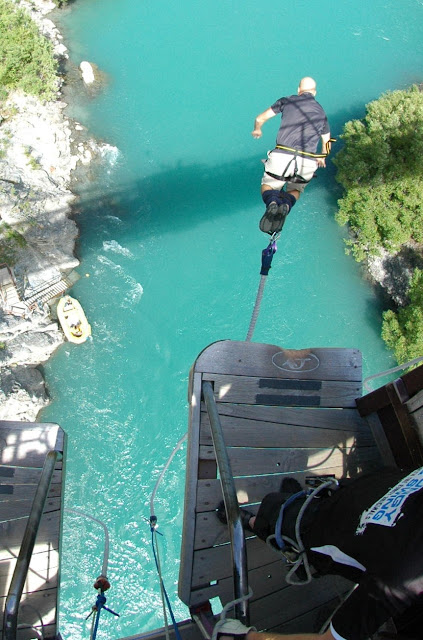 The jump masters had assured me I would get a full dunk, but I missed the water entirely, with my fingertips coming within a few inches of it. 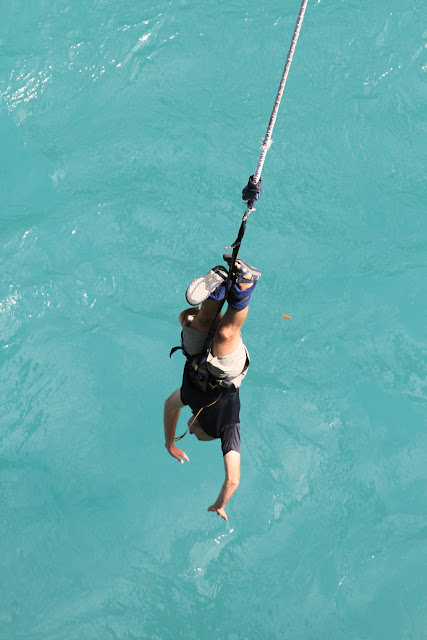 With the gigantic rubber band fully stretched out, I rebounded and got another good bounce in. After a couple bounces, the motion started to decay and they let me down towards the raft below, where I grabbed a long pole and was dragged in to have the harness disconnected. 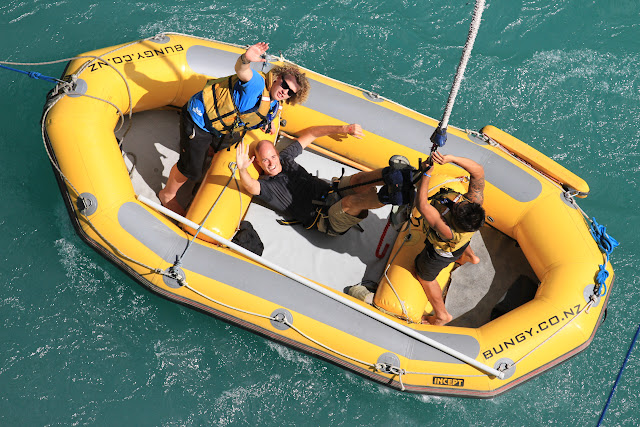 It wasn’t the most beautiful dive in the world – my legs were tucked in a little bit, I didn’t have the graceful swan dive I was shooting for, and I didn’t get dunked in the river below – but I did it!

I chatted with some fellow jumpers and watched a few go after me. With my heart still pumping from all the adrenaline, I remained energized throughout the day.

Now, I would love to say I’ve somehow “cured” this fear of bungee jumping. The truth is, it still scares the crap out of me! Only a couple weeks after my jump at Kawarau Bridge, a bungee jumper at Victoria Falls had her cord snap on a 111m jump. Granted, accidents like this are rare, and AJ Hackett assured me they haven’t lost anyone…yet.