We thoroughly enjoyed viewing Orangutans and Proboscis monkeys up close at a “rehabilitation centre” and “wildlife sanctuary.” Of course, the only reason these semi-wild animals can be found in these sanctuaries is due to their native habitat – the Borneo rainforest – quickly disappearing under a carpet of perfectly-planted rows of palm oil trees.

Palm oil is a cheap oil used in everything from chocolate, to mayonnaise, to cosmetics. You probably use some form of palm oil every single day without realizing it. We were gutted to see how much of the once-thriving rainforest has been replaced by palm oil trees. The destruction was something we saw with our own eyes – from the plane as we pulled in to Kota Kinabalu, peering out the windows of buses as we criss-crossed the region, and from the countless tanker trucks rolling down the road with “PALM OIL” printed on the side. You can even spot the rapid spread by looking at satellite photos. We started to wonder if there was any real “jungle” left. 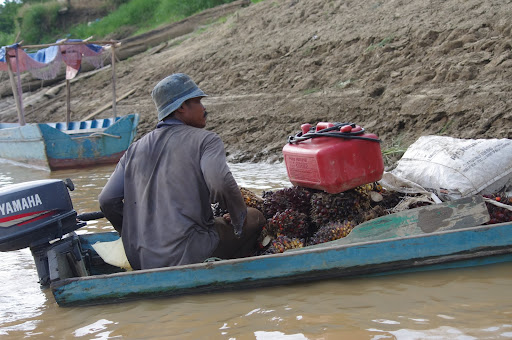 Most tourists to Sabah, Malaysian Borneo, include a visit to one of the jungle lodges dotting the Kinabatangan River, where a narrow band of native trees supporting Borneo’s abundant wildlife line the river, forming a “corridor of life” through an otherwise endless sea of palm oil plantations. 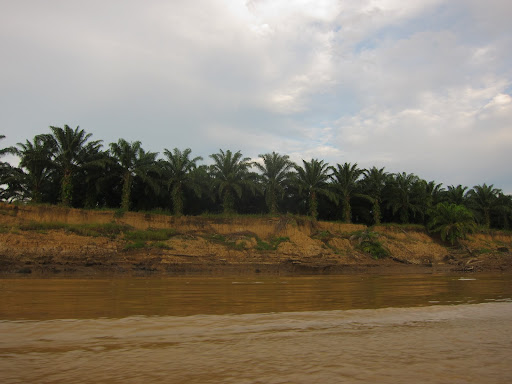 These lodges generally have air conditioning, hot water, electricity, and all the other modern conveniences. We decided we wanted a more authentic experience, and booked with Uncle Tan’s Jungle Camp – the most rustic and remote (not to mention the cheapest) option on the Kinabatangan.

We don’t mind roughing it a little bit, but we were a little worried when we heard that the camp had no running water (just buckets of cold, brown river water) and sleeping huts that had no doors or windows (just a mattress on the floor with a mosquito net). This would definitely be more of an adventure than our previous jungle tours in Las Pampas, Bolivia and Iquitos, Peru.

We started our 3-day, 2-night jungle experience in Sepilok, near the Orangutan Rehabilitation Centre, where we had spent a night to enjoy a second look at the orangutans and a walk through a rainforest park. 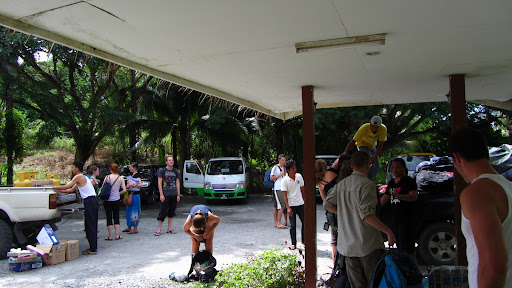 After a delicious lunch, we boarded minivans and departed for a jetty on the Kinabatangan River. Next, we boarded small boats for the 2 hour journey to the jungle camp, getting a chance to view wildlife along the riverbanks on the way. We were delighted to see wild monkeys, great hornbills, and even a sole orangutan resting up in a tree. The orangutan was much further away than the ones we were able to see at Sepilok, but still, it was great to see one of these magnificent creatures in the wild. 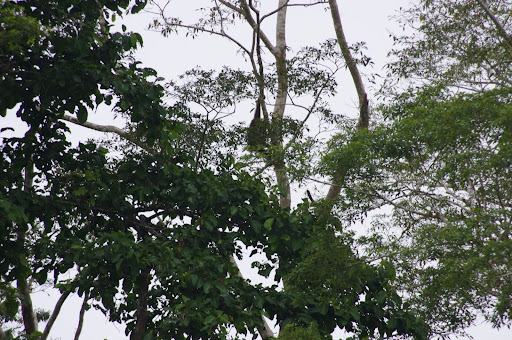 After arrival at the camp, we unloaded our bags and were shown to our huts. The staff advised us to remove any food or liquids from our bags and place them in sealed containers to prevent rats and other wildlife from being attracted to the huts. Yuck! 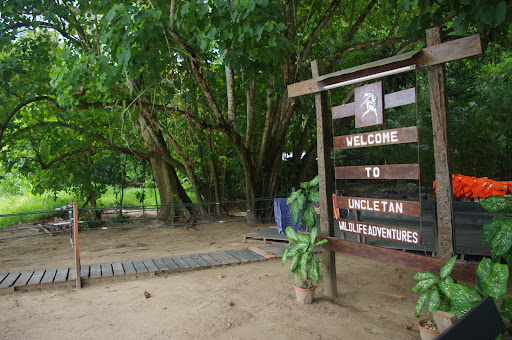 While the accommodation was basic, the food at Uncle Tan’s was phenomenal. We piled up heaping plates of delicious food for dinner and were briefed on our upcoming activities for the next few days. 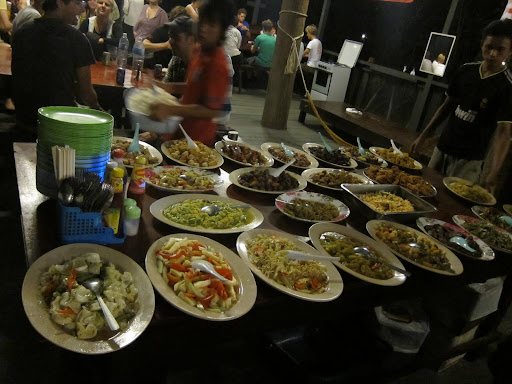 That night, we went on an evening boat trip, checking out sleeping birds and keeping an eye out for crocodiles. While we didn’t spot any crocs, we did see a large carpet python. The guide pulled the boat over to the bank so we could get out and take pictures. 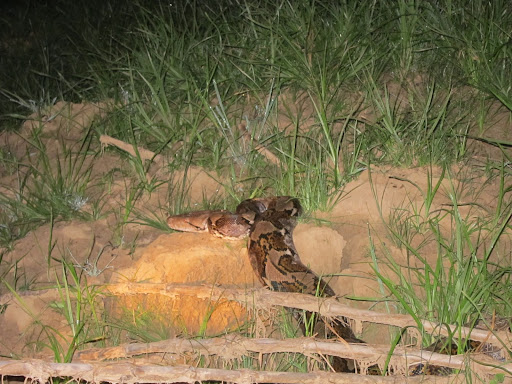 Back at camp, we settled into our huts and tried to get some shut eye. I won’t lie – it was hard to fall asleep worried about what sort of animals might crawl through the non-existent door or windows. We woke up tired and damp from the jungle’s humidity the next morning. 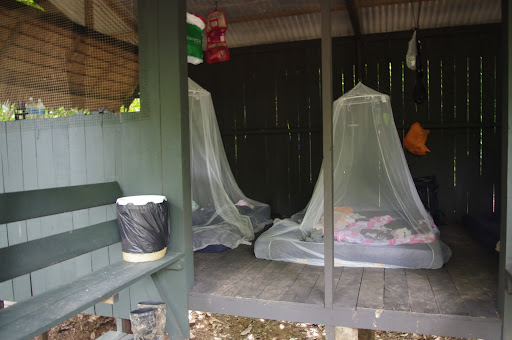 Not a big deal anyway as we had to be up early for the “morning safari” – another boat ride up the Kinabatangan River. Sadly, it was very foggy and misty, so we weren’t able to view much wildlife, though generally early morning is the best time to spot animals (since they slow down later in the day when it gets hotter). 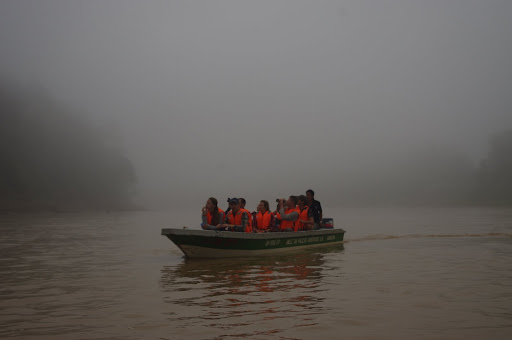 We returned for breakfast, followed by a walk through some trails surrounding the camp. It was muddy, but thankfully we were given rubber boots for the trek. We learned about medicinal plants, locals’ way of life, and saw a pretty cool spiky lizard. 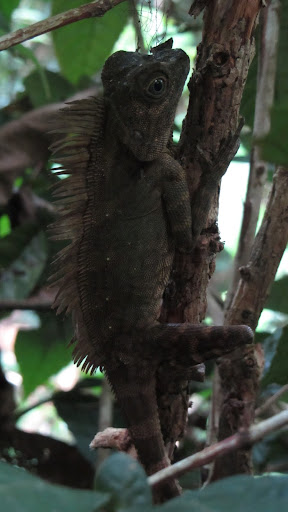 With the sun now shining brightly, we were given some free time. A couple brave souls decided to cool off by taking a dip in the murky brown river. After ensuring none of these pioneers were snapped up by crocodiles, we donned bathing suits and joined them. 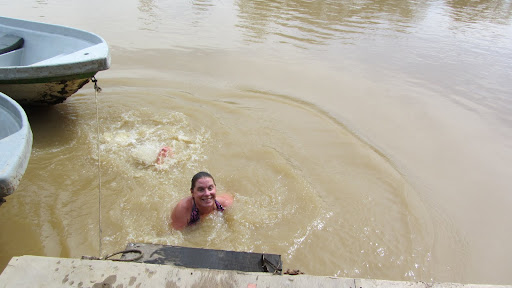 Before dinner, we departed on another evening boat ride, in time to catch the sunset. We were treated to a display of thousands of flying foxes (fruit bats) taking to the skies at twilight. These bats are huge – with an average wingspan over 1m (3 ft) – an amazing sight! 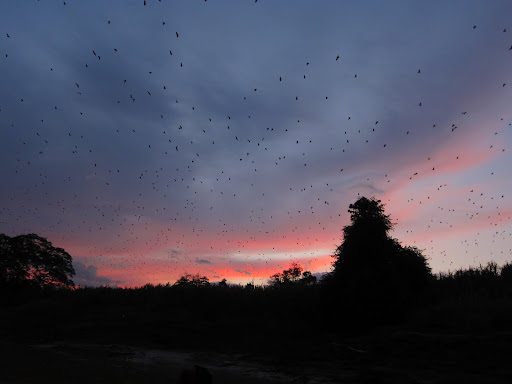 That night, we put on our boots again and took another jungle walk in the dark. It was a good chance to see more sleeping birds and some neat frogs. 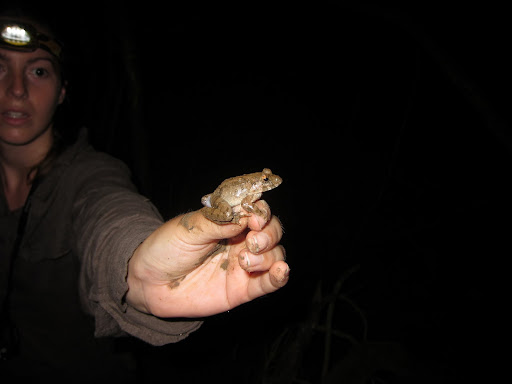 In no time at all, it was the third day and time for us to leave Uncle Tan’s Camp. We once again boarded the boats and made the trip back to Sepilok, where we caught a bus bound for Kota Kinabalu. This would be our last stop in Borneo before flying back to peninsular Malaysia. 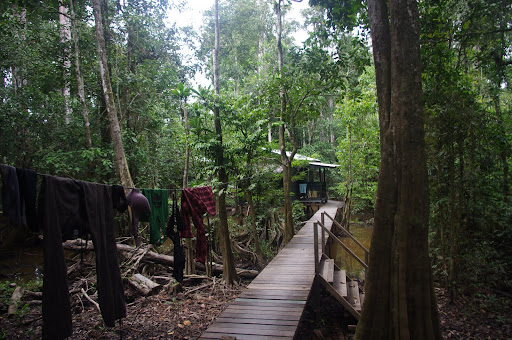 We enjoyed our time at Uncle Tan’s, as we did our entire two and a half weeks in Borneo. However, we left this island a little disillusioned – the pristine, untouched wilderness we had heard so much about is quickly disappearing. What will the future hold? We can only hope the world’s great remaining rainforest and wilderness can fight back the destructive greed and exploitation of mankind – a battle Borneo has lost.