We left Khao Lak, catching a government bus for a ride a couple hours inland to the mountainous and jungle-covered interior. Our destination was the Khao Sok National Park, home to a diverse range of flora and fauna, and home to a magnificent lake framed by soaring limestone formations.

Once the bus dropped us off at the junction for the National Park, we transferred to a pick up truck for the short drive to the village on the edge of the park where most guesthouses are located. Since we didn’t have a reservation, we asked to be dropped off at Las Orquideas Resort. We had read good things about this place, which seemed a little more upmarket than some of the other offerings around town. Unfortunately, they were completely booked, but the friendly owner, Francisco, insisted on helping us find another place to stay. He even let us pile into his pickup truck and hunt around town. Finally, we ended up at a nice place not far from the park entrance, complete with a small swimming pool. After thanking Francisco a thousand times, we checked in and ordered some lunch. 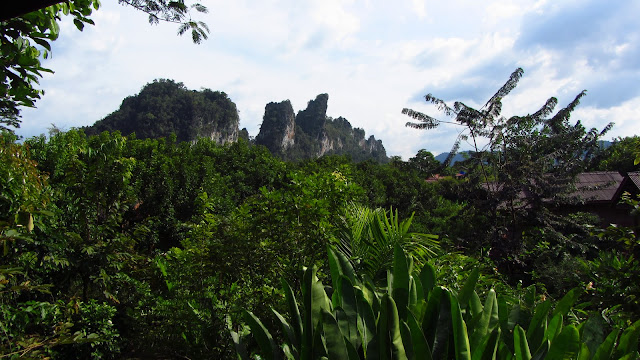 The small village outside the park is a great place to relax, with lots of restaurants and even a couple of bars. We enjoyed chilling out the rest of the day and exploring the area. 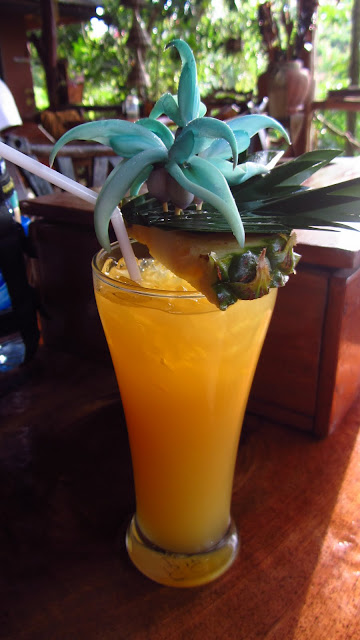 Most people come to Khao Sok to hike around the many nature trails, looking for birds and other wildlife. For a brief period every year, though, it’s also possible to spot the Rafflesia Kerrii, a huge parasitic flower which attaches itself to vines and blooms in January and February. We had heard about the Rafflesia when we visited the Cameron Highlands and Kota Kinabalu in Malaysia, where it can also be found around the same time of year. While we weren’t in the Cameron Highlands during the Rafflesia season, we did happen to be in Khao Sok at the right time (February), and were eager to see this strange flower for ourselves. 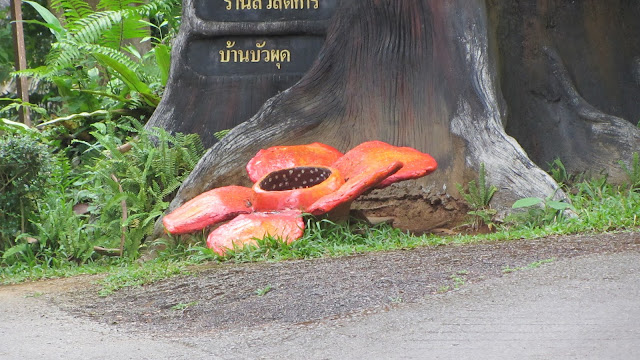 We made arrangements to follow a guide early the next morning, to a known spot where Rafflesia flowers were blooming. In addition to the limited season available for viewing these flowers, another problem is that they bloom somewhat spontaneously. Once bloomed, they only last about three days before fully decomposing. The heavy, rotting flower quickly breaks down and lets off a terrible odor (some have described it as rotting flesh). So, not only do you have to be lucky enough to be searching for Rafflesias during the right season, you also have to be lucky enough to find ones that have just bloomed. 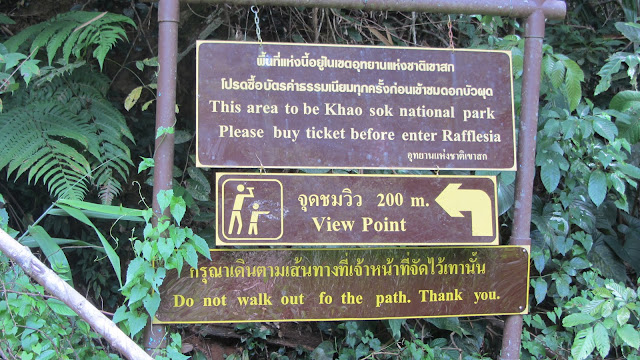 After meeting with our guide and another couple tourists, we entered the National Park, and started making our way up a steep hill. The flowers are found at the cooler, higher altitudes, so we would have to put a little effort into the hike. 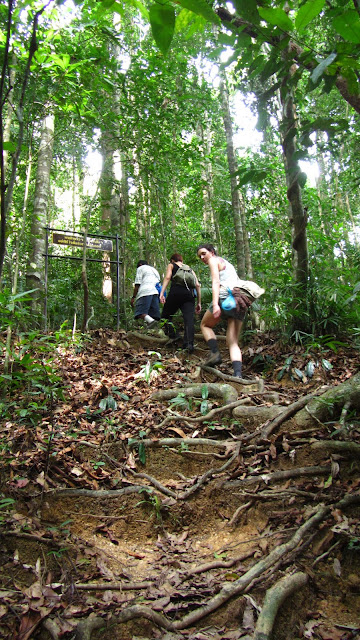 About halfway up, we stopped at a nice scenic viewpoint, where we could see part of the park along with some of the surrounding rubber plantations. 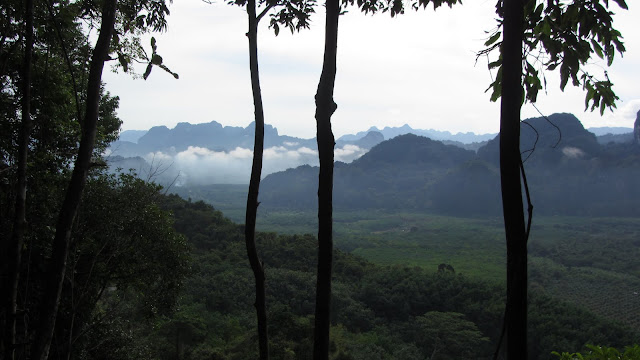 As we continued the hike, we started worrying about our chances of spotting the Rafflesia. Would this all be for nothing? It was, after all, getting late in the season. We asked our guide if he had spotted any recently, and he told us there were a few yesterday. Nervously, we continued on. 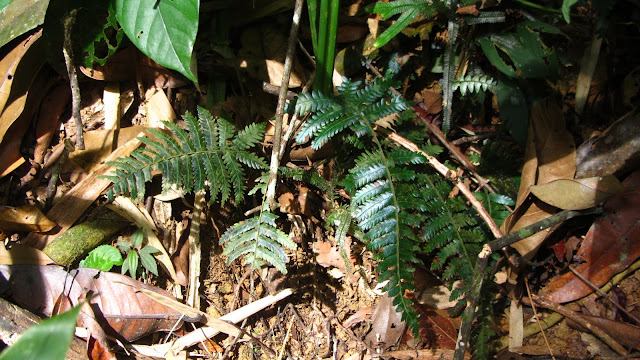 Finally, we approached an area with low bamboo fences and signs warning visitors not to cross or touch the flowers. Our guide showed us the vines the parasitic flowers attach to, and the huge bulbs which eventually bloom into the flowers. 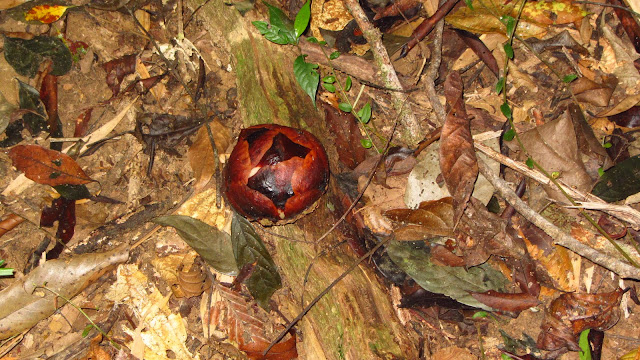 We saw some flowers that had already bloomed and were now dark and quickly rotting. The small wasn’t as bad as we had expected. The strong, rotting smell has been responsible for the nicknames this flower has: “corpse flower” or “meat flower”. The smell attracts flies, which transport pollen from male to female flowers. 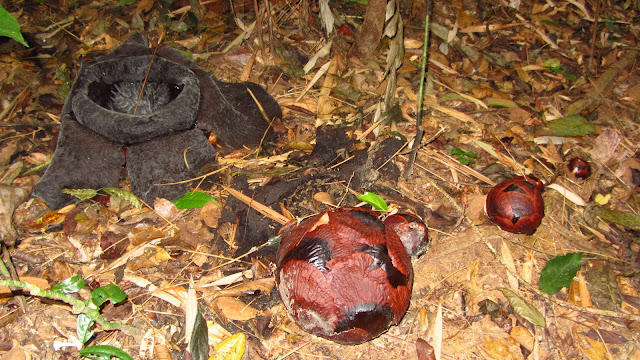 Our guide let us on a bit further and told us we were in luck – there was a huge, beautiful flower that had just bloomed the night before! 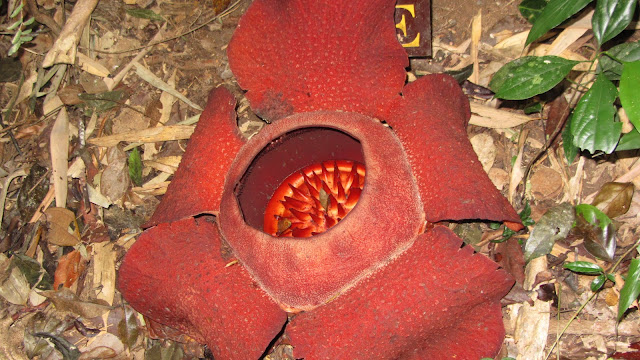 The flower was about two feet in diameter, with five huge red petals and a large hollowed out interior. It truly was like something from the movie Avatar. 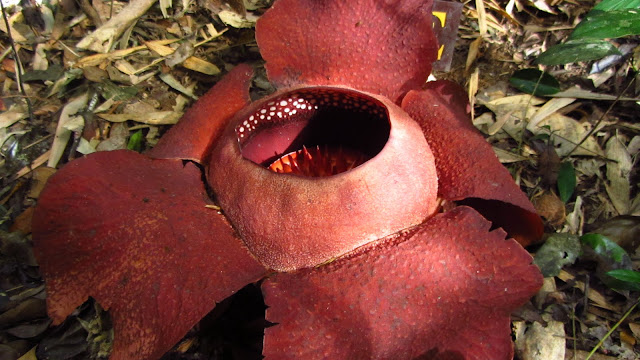 We took the opportunity to get as close as permitted to snap some photos of the marvelous exotic lifeforms. 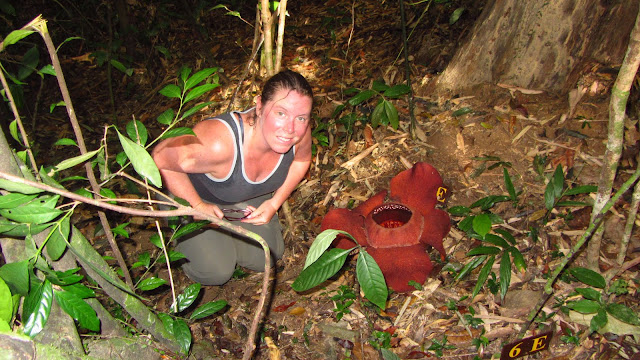 Finally, it was time to return. Joyful about our encounter with the rare and wonderful Rafflesia Keerrii, we hiked back down the hill in record time and returned to the village.

Stay tuned for our story further into Khao Sok National Park, where we stay in a floating bungalow on the beautiful lake Chiao Lan…