Erik tried to convince me we had seen enough of Malaysia’s Perhentian Islands after only visiting the smaller island, Kecil. I wasn’t so sure. Although the smaller island is rumored to be more laid back and geared for divers and backpackers, I knew how beautiful both of these islands are said to be and I thought we should at least give the larger island a shot.

Perhentian Besar (meaning “big”), is another of these gorgeous virtually untouched Malaysian islands. Some say it’s more expensive and more for families, but once I heard one word, I knew we had to go. Turtles. I love sea turtles. After our incredible experience snorkeling with turtles in the Galapagos and the few we had seen from our snorkel tour in the Perhentians just a couple of days before, we’ve developed a deep love for these endangered species. I had to go.

We had heard of a resort called Bubbles located on a gorgeous, secluded beach that has great snorkeling right off the beach. There’s a dive shop there, too, and Erik was thinking of doing some more fun dives, but the real draw was that green sea turtles lay their eggs each night right on their beach! 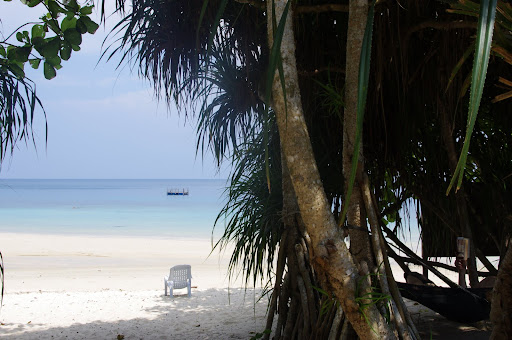 After our choppy and wet (and a bit scary) boat ride over from the smaller island, we were dropped off right on Bubbles private beach. We settled into our nice and fairly cheap fan room and had a walk around the place. It seemed nice and clean and the beach was really beautiful. We had a peak around at the old cottages that used to comprise the resort. They were cute little cottages that were still in fairly decent shape, so we wondered why they’d been virtually abandoned. 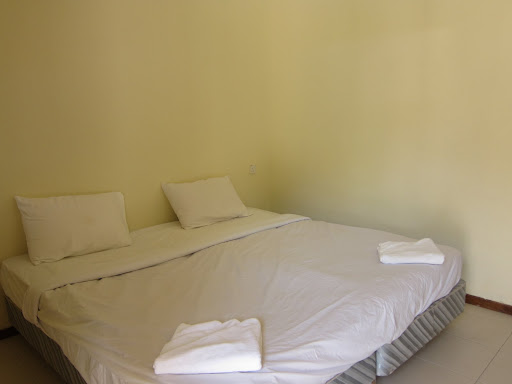 I could tell right away, Erik hated the place. The food was very expensive. Tasty, but our only option since there was nothing else around that could be reached on foot. Upon arrival, we went with the a la carte food option which we were later very happy with. The buffet option was even more expensive and the food didn’t look all that impressive.

After lunch, we decided to check out their “house reef” and do some snorkeling. Sure enough, just as we entered the water, we saw a small black tipped reef shark. I seriously have great luck of drawing them in, despite my fear of sharks. The snorkeling was ok, but the coral is basically all dead. When we hear the statistics about the fragile state of the oceans and man’s detrimental effect on coral, we see time and again just how dire the situation is.

That night, we put our name on the board for “turtle patrol.” One of the perks of staying at Bubbles is that each night of the turtle nesting season, turtles come to shore between 9pm and 5am to lay their eggs. The locals have had a long history of eating and poaching the eggs, worsening the already endangered status of most of the ocean’s turtles.

A conservation project is in its third year on this beach. Each night, as the turtles lay their eggs, volunteers monitor the turtle’s size, measurements, number of eggs laid, and note if there is a tag on the turtle (many turtles return to the same beach to lay their eggs each year)! 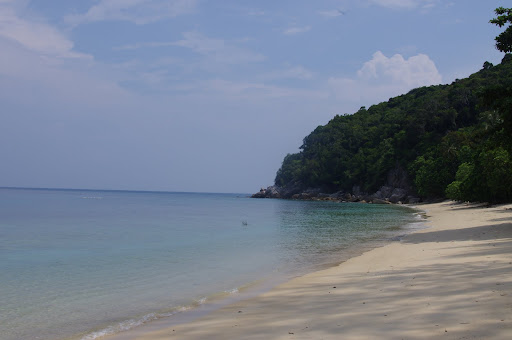 The eggs are then collected by the volunteers. Some stay at Bubbles and are held until they hatch. Others are collected each morning by the fisheries ministry. We were a bit curious if the eggs ever reach the fishery or if they go straight into the hands of poachers. After handing off these precious eggs to a man in a small boat, one can’t know for sure where they will actually end up.

That first night, we were all excited to hear a knock at our door and run to the beach to see a turtle laying her eggs. But we woke the next morning without seeing a single turtle. Over breakfast we learned a record 8 turtles came ashore to lay their eggs! We were happy to hear it, but sad we never got to see them. Apparently, there was so much action on the beach, the volunteers were very busy all night and couldn’t stop to get us. We were pretty sad. But, vowed to see turtles that night!

Another day chilling in the hammocks, reading a book, having a dip and a snorkel in the ocean and just relaxing. Despite Erik’s hesitations, I could tell even he was enjoying it! 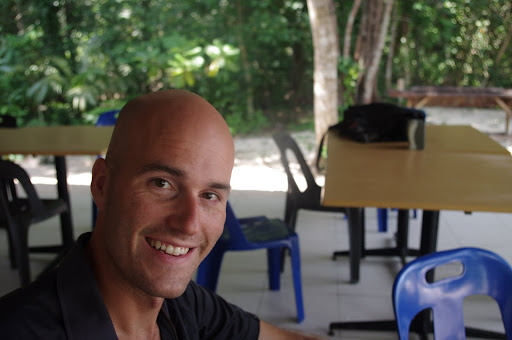 That night after dinner, we decided it would be smart to buy a few beers in the restaurant and head down to the beach to enjoy the night sky and sounds of the waves. That way – we’d be really close by should any turtle action take place.

We’d made friends with a couple of the volunteers and it was their shift that night. Sure enough, a few minutes after our first beer, we see the volunteers with their flashlights heading towards us on the beach. They recognize us and tell us there’s a turtle laying her eggs and ask us if we want to come have a look. Of course, we’re thrilled and jump on the chance.

We walk down to the far end of the beach and find our turtle near the treeline. She was huge – at least a meter long. We saw her lay some of her eggs – it was incredible! We had seen turtles nesting in Costa Rica, but there we were fighting with 20 or so people to have a look. This time, it was just Erik and I, the two volunteers and the turtle. We sat on the beach and watched her bury her eggs. We got to talk to the volunteers some more and found out more about the program.

After taking her time to cover her precious eggs, we watched as she slowly inched her way back into the sea. Words don’t really suffice, but it was quite a magical night.

The next night, after another day relaxing on the beach, we were lucky again and got to be a part of a group releasing 9 hatchlings into the sea. We all gathered at the shore. The volunteers shone their light towards the moon so the turtles knew where to swim. One by one, we saw these tiny creatures swim out into the big dark ocean. I really hope they made it!

At the end of our three days at Bubbles, we were ready to move on. We even felt a few pounds lighter since we were holding back on eating a bit since it was so expensive!

All in all, it wasn’t our favorite beach resort, but it was all worth it for the love of turtles!