We were a bit sad to leave Malaysia, after enjoying some of its beautiful islands, jungle and wildlife. But we were excited to enter a new country, our 17th of this trip – Indonesia.

After landing in Jakarta, we knew it would be a different story than Malaysia. We’re cautious everywhere we go, but with Southeast Asia, I was even more on-guard. Scams are everywhere and locals are desperately trying to make as much money as they can off of us tourists. I’m all for earning an honest wage. But some people here are less than honest. 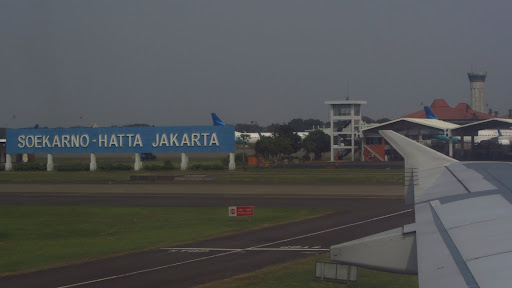 After dropping our bags at the hotel, we decided to see a bit of Indonesia’s capital city, even though most backpackers skip it altogether. We headed to the Monas Tower overlooking the city. 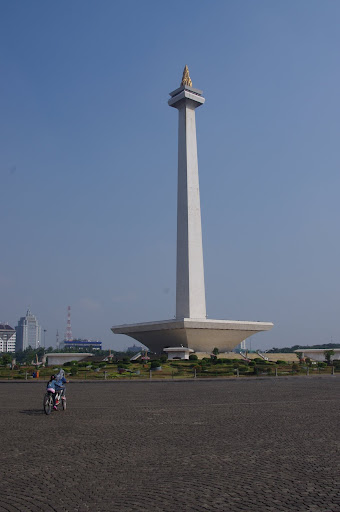 We knew to take only Bluebird taxis, as they are the only official metered taxis. We arrived early and got some photos of it from below. After just a few minutes near some cool statues near the base of the tower, we had a first! A man approached Erik and asked for a photo. Erik, of course, assumed he wanted him to take a photo of the man and his family. But, he just wanted a photo with Erik! Our first you’re a Westerner and I want a photo with you moment. It was too funny and I thought it was rather sweet. 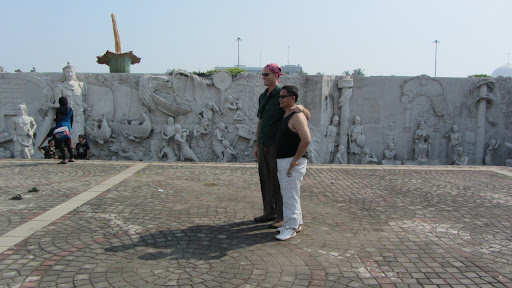 We wanted to head to the top for a good look above the city. But, the catch was there’s only one small (and I mean small) elevator that takes just 6-10 people up at a time. We waited for over one hour in the Jakarta heat to get up to the top. 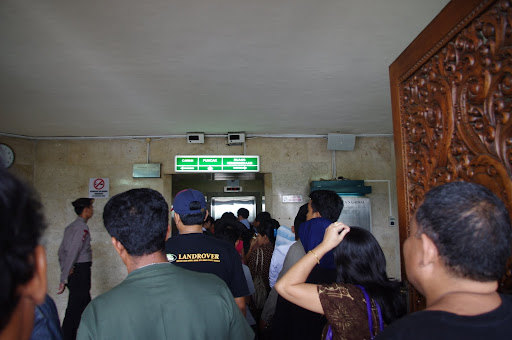 The view was nice and we snapped a few photos. It actually gave us a great view of the Istaqlal Mosque we were about to visit next. 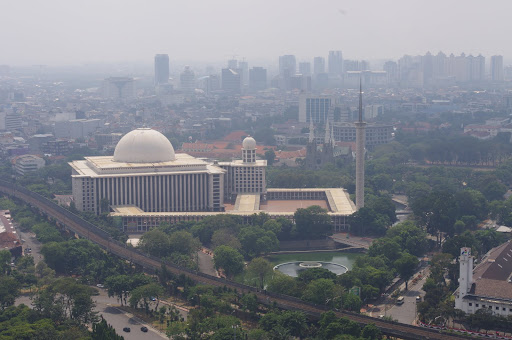 As I was taking in the scenery, I noticed a woman taking candid photos of me with her cell phone. I can understand people wanting a photo, but the least you can do is ask. I kept hiding behind columns or the brochure I’d been carrying so as to block her paparazzi view. 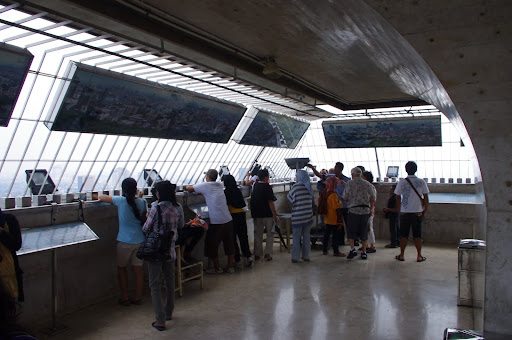 After the tower, we were rather sweaty and exhausted. We made our way to the train station to buy our tickets for the trip to Yogjakarta in a couple of days. With that settled, we wanted to make our way to the mosque. So begins another frustrating Indonesia moment. As we step out of the train station, actually – before, we’re accosted by men yelling “Taxi – where you go?” I had a bad feeling about this. Train stations are notorious for new travelers strange to town to be scammed by a local who can tell they’re clueless. So, as we walk out, and going against our better judgment to wait for a Bluebird taxi, we go with a guy who takes us to a blue taxi. Not a Bluebird taxi. We told him we wanted to go to the big mosque and he holds up three fingers which Erik took to mean 3,000rupiah (less than 50c). The mosque was close, but the walk would have been a bit hairy through a few sketchy blocks and some wide busy intersections. So, against our better judgement, we got in. As we’re on the way there, I told Erik “something’s not right here.” Erik said “he’s doing us a favor…” After our three minute cab ride, we arrive at the mosque. What would have cost us 8,000r in a metered taxi, our driver was demanding 30,000r! Absurd. Definitely a scam. I began getting heated and saying “no,” which I knew he could understand. Erik knew we’d been duped and rather than make a scene in front of a mosque, we paid. It was only $3.50, but should have been less than 50c. But it wasn’t about the money – it was the principal at that point. This was a lightbulb moment for me. I knew I had to be very aware and cautious at all times in Indonesia. Never let your guard down.

We entered the mosque foyer. The mosque was enormous. It’s the largest mosque in Southeast Asia and can hold over 120,000 people during the high holy days! We were given robes to wear to enter the mosque, as a gesture of respect to the grounds. This mosque had become more famous in Indonesia after Barack and Michelle Obama had visited there less than a year prior on their visit to Jakarta. 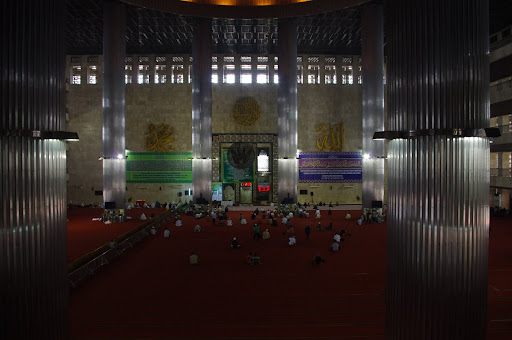 The mosque was quite modern and grey, quite different than we’d imagined. But, the expanse of the space was very moving and overwhelming. We thanked our guide for our complimentary tour and made sure to make a donation on our way out. 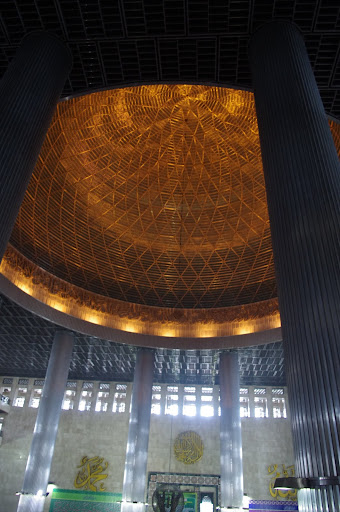 Before we’d arrived in Jakarta, I’d been planning to meet up with an old schoolmate of mine from high school. My friend Cris, who I’d played high school volleyball with, was now living in Jakarta. Thanks to Facebook, we’d been in touch and were planning a visit while we were in town. Cris had generously offered to host us and we finally spoke on the phone! After setting up the details of meeting up, Cris reminded us to always take Bkuebird taxis, and we told her we’d already found that out the hard way…

As we were turning in our keys, we were sad that we hadn’t found one place while we were in Jakarta. We knew Barack Obama had gone to primary school in the area we were staying in, Menteng, during the four years he spent growing up in the city. The day before, we had walked around for blocks searching for SD Besuki Menteng school. We wanted to see it so badly. Just as we were handing in the keys at checkout at the hotel, Erik saw on a Google map online that his school was just two blocks away! 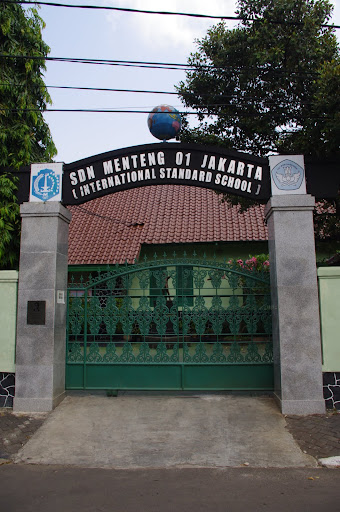 The hotel manager at the desk said, “yes, of course, it’s very close just two blocks away.” We left our bags in the lobby and ran to see Obama’s old school. As we got closer, we could see the small statue of little Obama as a boy holding a butterfly. 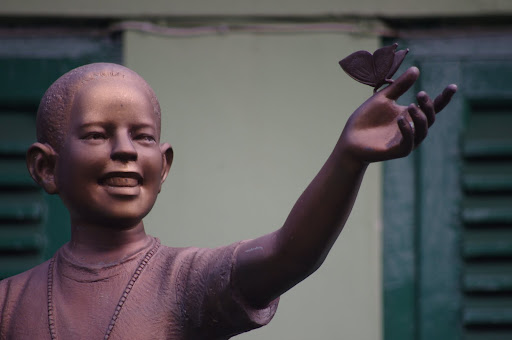 There was a plaque outside in English proudly stating that the 44th President of the United States of America had attended the school in Menteng as a boy. Tears came to my eyes. It was just a really special moment at a small school on a side street in Jakarta. No other tourists. Just us. Two Americans on the other side of the world. Proud to be standing in a place where our president grew up. 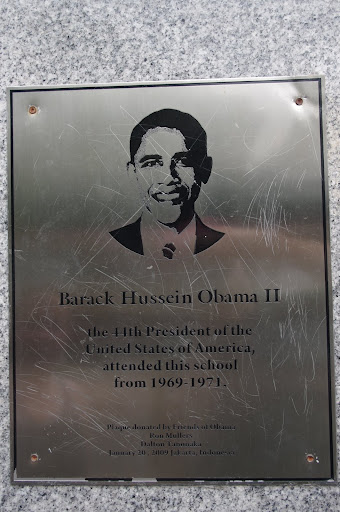 We met up with Cris and her husband, Anker, and their adorable daughter, Isabela. It was so wonderful to see her after more than 15 years! She looked virtually the same after all these years and we just laughed over old school stories. It’s sad that we had lost touch over time, but thanks to Facebook (what would we do without it???), we’d reconnected just in time to meet up on the other side of the planet. 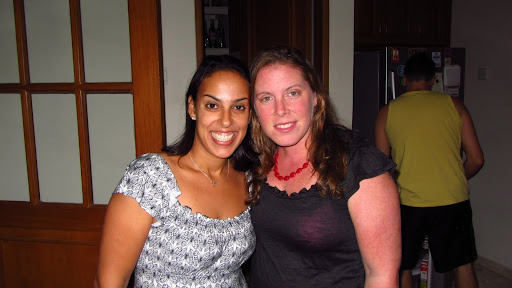 Cris and her family welcomed us into their home, we went for a swim with Isabela in their pool (she loved Erik – all girls seem to!) and they grilled up a delicious barbecue of steaks, chicken and salads. It was such a wonderful day! We stayed up late laughing and talking – just like old times.

While Jakarta is by no means the best place to start a trip through Indonesia, we learned a few things and got to catch up with a wonderful old friend!

4 thoughts on “Falling for a Scam, Feeling Like a Celebrity and Discovering Obama’s Roots – Jakarta, Indonesia”