After a slightly disappointing time in Nicaragua, we were ready to move on to our fifth country, Costa Rica. Most of the things we had heard about Costa Rica were fantastic, so we had high expectations for this country. It is said to have amazing cloud forests, incredible animal life, beautiful landscapes and fantastic beaches.

Our first stop in Costa Rica was to the Pacific beachtown of Tamarindo. Huge waves make for great surfing here, which we just enjoyed from an observer’s perspective, although it would be fun to learn on this trip at some point. The sunsets on the beach in Tamarindo were stunning, and our hostel Villas Macondo was nice with a beautiful pool and a great kitchen. 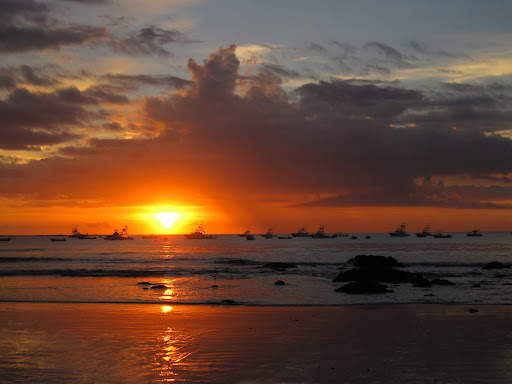 After a couple of days at the beach, we caught a shuttle van to the famous cloudforests of Monteverde. The ride there was extremely bumpy, which we later found out was intentional. Apparently, the people of Monteverde don’t want their town to become overly touristy, so they leave the dirt roads very bumpy so that only people that really want to go there are tough enough to stick it out. We arrived in the dark in the rain, as has become common practice, but we were lucky to snag a cozy room at the Costa Rican run hostel Cabinas el Pueblo. The family that owns and runs the place is just fantastic and really made us feel at home.

Monteverde (Santa Elena) is a small, quaint town with a few bars and restaurants. The real draw to this town is the nature. While Erik worked one day, I got to see some cool orchids at the orchid garden in town, as well as many snakes and lizards at the Serpentario. We also got to see some cool species of frogs at the frog sanctuary. 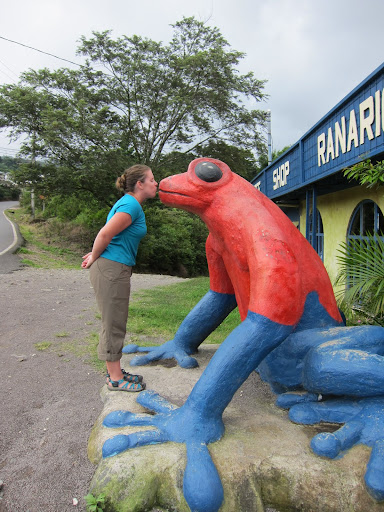 Crossing our fingers that it didn’t rain, we booked an early morning tour with Selvatura to explore the canopies and cloudforests. One of the adventure sports that has grown out of these sublime cloudforests is ziplining. Erik was excited to try it for the first time in Monteverde, while I was glad to keep both feet firmly on the ground. We started the day with an amazing walk through a hummingbird garden. We had never seen so many gorgeous hummingbirds before. There were several varieties in all shades of beautiful colors; my favorite was the gorgeous indigo species. It was incredible how they just whizzed right by our heads in a very playful manner. 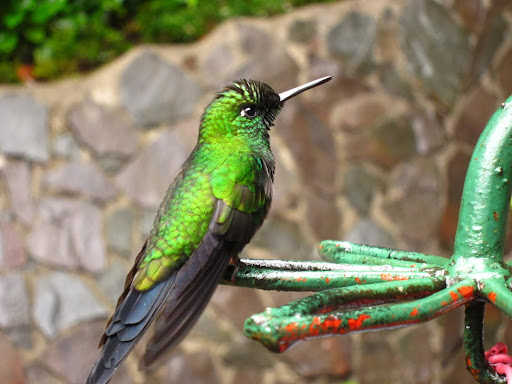 We also visited a butterfly sanctuary and saw several varieties, and even saw one hatching from its cocoon. Next, we took a hike through the treetop walkways. These suspension bridges stretch high above the forest below offering spectacular views. Unfortunately, we didn’t see much wildlife, but it was still quite a thrill to be walking so high above ground.

Then, Erik got his gear on and headed to the ziplines. I’ll let him talk about this part.

After signing a release form (unlike most Central American countries, Costa Rica actually has decent safety standards), we were suited up with a harness, gloves, and a hardhat. The guides gave us a quick demonstration, showing us how to brake, what to do if we got stuck, and how to travel down the lines. Finally, it was time to head to the first zip line! Somehow, I ended up at the front of the line, so after a couple of guides zipped down in front of me, I was the first victim to head down a fairly short line. What a thrill to be flying through the air, just feet away from gigantic trees! While we were zip lining through a “nature park”, there really was little time to enjoy the birds and trees – mainly I was concerned about not screwing up and chopping off a finger (apparently fairly easy to do), getting stuck on a line, or braking incorrectly. After a few more lines, though, I relaxed a bit and was able to take it all in. We passed over some magnificent scenery – hundreds of feet above valleys and rivers, way above the canopy.

After descending down 14 cables, we paired up to tackle the piece de
resistance – the final cable, which is 1 km long! An English guy somewhat awkwardly wrapped his legs around my stomach, I hung in front of him and he was responsible for breaking, and we both screamed our heads off!

As if that wasn’t enough, they gave us the option of capping the day off with a ride down the “Tarzan Swing”. Using the same harness, we were led up a platform, attached to a cable, and told to jump. This was by far the scariest thing I attempted all day, as the first couple seconds were a complete stomach-wrenching freefall, which was arrested only a few feet above a concrete floor.

Here’s a video of the Tarzan swing (which really does make it look tame!):

That same night, we were lucky the rain held out (for a bit anyway) and we headed out for our first Night Walk. Suited up in plenty of bugspray, rainjackets, long pants, and our trusty headlamps, we were ready for some great nighttime nature. Our guide was really funny and informative. As we started to walk into the dark forest, I asked Erik whose idea this was – he reminded me it was mine. It was scary walking through the forest at night, when we knew there were several dangerous creatures lurking about. We saw incredible insects including a praying mantis, a huge walking stick bug, a halloween or orange-kneed tarantula (named because of its orange and black coloring) hiding in a bamboo trunk and protecting its huge egg sac. Wow! 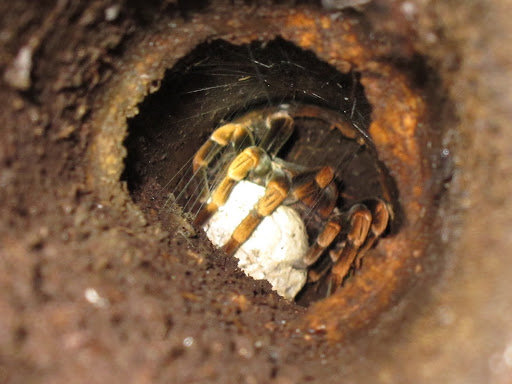 We also saw a sleeping porcupine, a sleeping sloth, a toxic yellow pigmy frog a motmot bird, and a hummingbird asleep in its nest. We saw several species of grasshoppers, some interesting bananas that are supposedly endemic to this part of Costa Rica, and they were yummy. Perhaps the most amazing thing we saw were these incredible bioluminscent mushrooms. I still don’t quite understand it, but these bizarre mushrooms actually glow in the dark.

On our last day in Monteverde, the sweet owner, Melani, helped me to finally see the resident sloth that lives in the tree across the street. We were so lucky because she had her little baby wrapped up inside her. So adorable! Next, we go exploring the cloudforests some more in La Fortuna…

You can view all our photos from Monteverde in our gallery.