Our next stop in Bali took us to the small bay of Lovina. Our hotel was nice, but directly next to a construction site, so unfortunately, not very quiet. Our first night there, we stumbled upon a cute outdoor restaurant, Warung Ayu, serving standard Indonesian fare. The nasi goreng (fried rice) and mie goreng (fried noodles) were delicious and extremely cheap. The entire meal with a satay appetizer in a spicy peanut sauce and a large bottle of beer only set us back 70,000 rupiahs / $8.25 USD! And it was delicious! 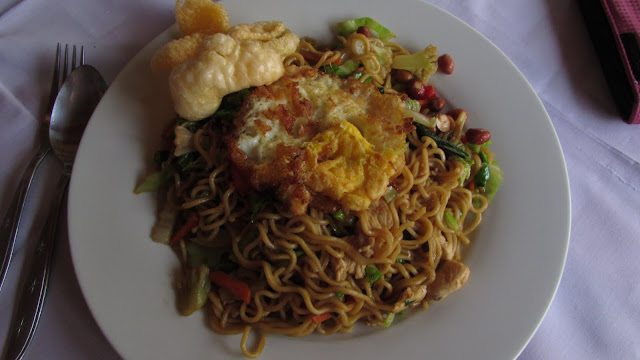 The only real thing we wanted to do in Lovina was see the famous Lovina dolphins. The friendly owner and cook at Warung Ayu told us she sold tickets to the dolphin cruises. We booked the 6am tour for early the next morning, hearing that it was better and not as hot as the later tours in the day. 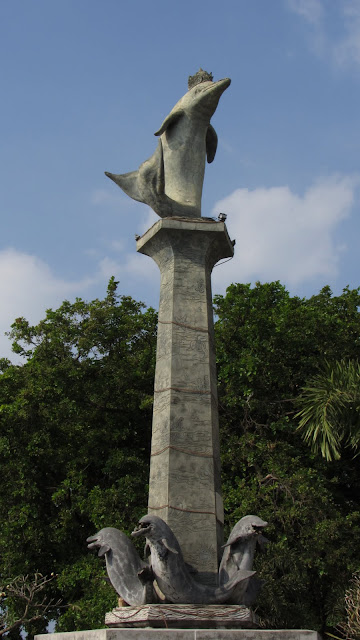 When we arrived at the beach before sunrise, the shore was packed with boats for the early cruises. Usually a dolphin cruise means getting on a large boat with a mass of other tourists. This boat only fits 4 -6 people. The other couple on our boat was actually staying at our hotel, too! 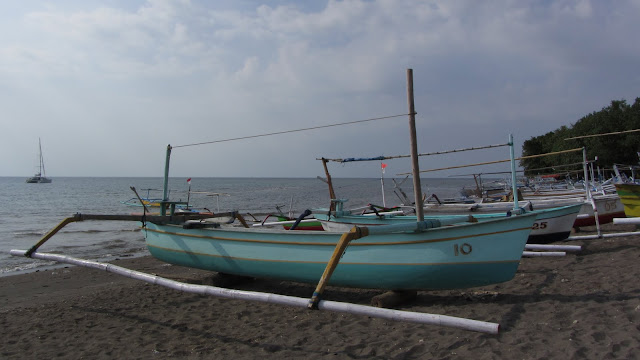 It took a while to get everything organized and we insisted on having lifejackets, even though we saw other boats going out to sea without them. The ride out to the dolphins was long and a bit scary. We were actually on a wooden canoe type boat and our narrow seats were on a wooden board stretched along the two sides of the boat. Very glad that we had insisted on lifejackets… 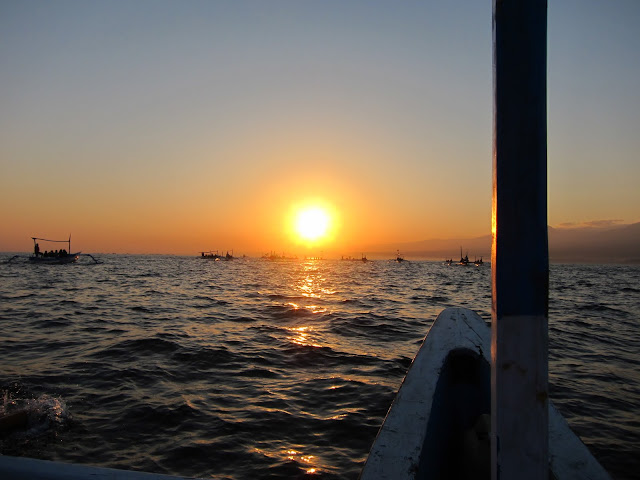 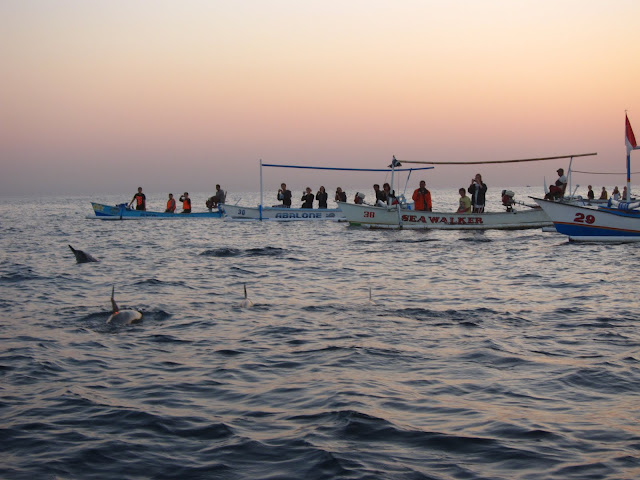 The town of Amed turned out to be one of our favorite spots in Bali. After an insanely terrifying speedboat ride from Gili T, we were kissing the hot rocks on the beach under our feet after we safely reached land. We chose to stay in a small bay of Lipah at a cute place called Coral View tucked at the quiet end of the bay right on the water. The rock beach was so nice and relaxing – we loved taking naps and having a nice cold beer while lounging on the hotel’s chairs. 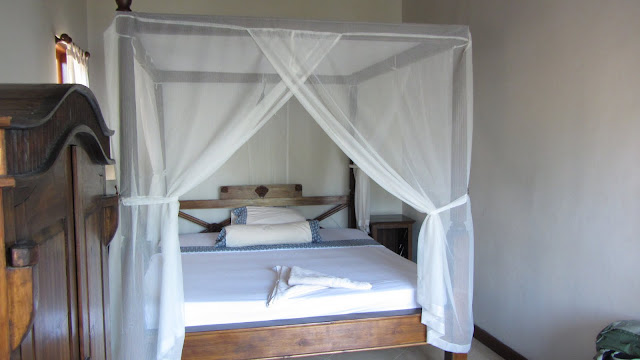 After hearing that this bay was a great spot for snorkeling, we decided to check out the underwater world. After a quick 2 minute swim out to the reef, we were pleasantly surprised to see some beautiful fish and colorful and interesting coral. After exploring our side of the bay, we headed to the far side and had lunch at a dive center cafe that had free WiFi. We checked out the reef right out in front of the cafe. Spectacular! We felt like we had found a secret snorkeling hotspot. The reef was gorgeous – very colorful and alive and the fish life just blew us away! We wound up snorkeling here a couple of times – it was that good! 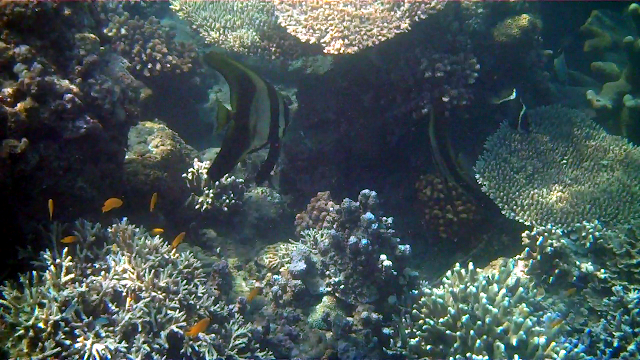 The most popular dive site in Bali is in Amed and Erik wasn’t going to miss it. The Tulamben wreck – an old US army transport ship used in WWII was torpedoed by the Japanese. It now sits just 120 meters offshore, so it makes for a wonderful and easily accessible dive site. Since it’s so close to shore, it’s also a hotspot for snorkellers, as it’s a rare treat to see a wreck. 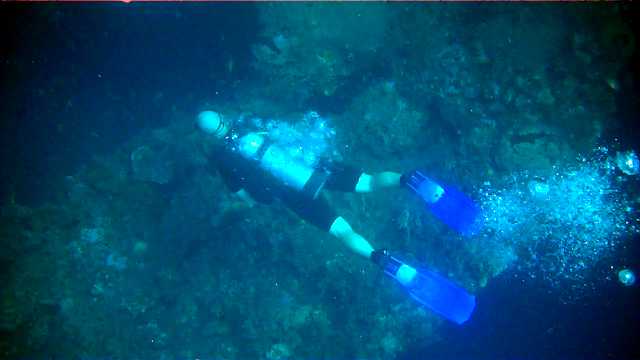 On the ride to the wreck site, we came upon a funeral parade. Since Bali is a Hindu island, they believe the bodies must be cremated and the ashes must be released to the sea. The huge procession stopped all traffic but we were happy since it was actually a Bali tradition we had been hoping to witness. What is often seen as a time of death and mourning was quite lively and a real celebration. A very different but positive way to react to death, as you can see in our video:

The Tulamben wreck was amazing. The top part of the ship was just 3 meters/10 feet below the surface when we were there. It was incredible for me to see this wreck since it was my first. It was also neat to see Erik down just below me while he was doing his dive. A huge school of jacks swirled all around us – a fantastic sight! 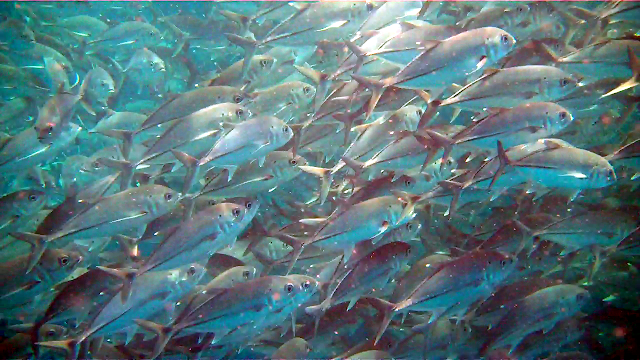 As we left Amed, we were left loving it for its underwater life and the general relaxing vibe we felt while staying there. A secret paradise in Bali, at least for now…