During our week on the Caribbean island of Utila, we heard of some smaller satellite cays off the far western end. The Cays promised a slower pace of life than party-hardy Utila, along with uninhabited coconut islands with perfect beaches and the best snorkeling in the region.

The largest of these tiny islands, Jewel Cay, would be our base for a few days, at Captain Morgan’s dive shop and hotel, named after the famous pirate Henry Morgan who attacked the Spanish from these very islands in the 17th century.

We made reservations and caught an early morning speed boat from Utila. After a 30 minute ride over, we pulled up to Captain Morgan’s dock, off-loaded our bags, and checked into a room. 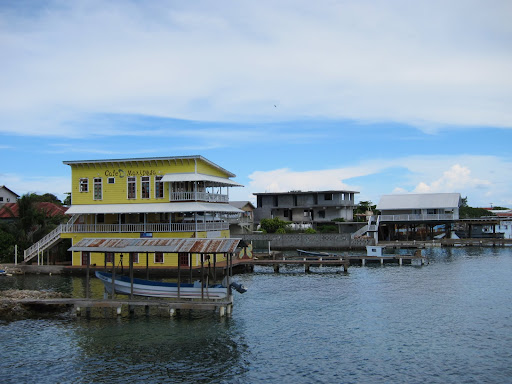 I had scheduled two fun dives for that morning and wasted no time getting my gear together to join the trip out. As a newly minted open water diver, I was a little anxious to be diving at a new facility. Captain Morgan’s is a much smaller operation than Alton’s on Utila, where I was certified. However, my nerves were calmed after meeting the divemaster and other divers and I could focus instead on having fun. 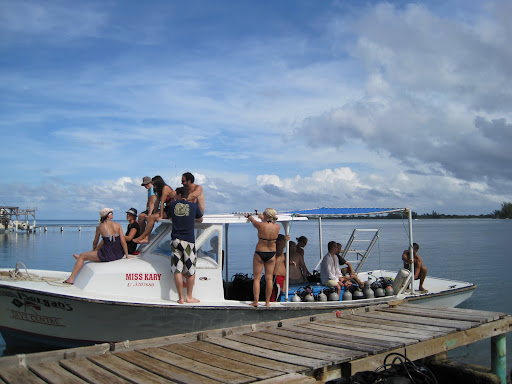 Captain Morgan’s position allows them to visit dive sites on the North side which are usually too far out of the way for the other dive operators coming from Utila, so I was looking forward to diving in new territory.

During the two dives, I was able to see a sea turtle, eels, drum fish, lobsters, barracuda and many other colorful fish. On the way back, the boat captain thought he spotted a whale shark.  These slow-moving monstrosities are the largest fish in the world – growing up to 40 ft long – and are often spotted off Utila.  This understandably got everyone very excited, though in the end it turned out to be a false alarm and I would leave the islands without having the chance to view the star attraction.

The dives were definitely a lot of fun, but I was still glad I had gone to Alton’s to learn. Captain Morgan’s seemed a lot less professional and the equipment, dive boat, and overall feel of the place is not up to par with Alton’s.

One great thing about Captain Morgan’s, though, was the breathtaking snorkeling right off their dock. Heather and I enjoyed checking out the thousands of fish and beautiful coral – it was like being in an aquarium! There, we saw a couple sting rays, large tarpins (which scared us at first – we though they were sharks!), trumpet fish and more. Jumping in during the late afternoon “feeding time” we were surrounded in all directions by huge schools of shiny bait fish, with their natural predators hunting them down.

While on the island, we hung out with some of the other divers staying at Captain Morgan’s.  The second day there, a few of us hired a water taxi to visit Water Cay, a small uninhabited island with gorgeous beaches, perfect blue water, and amazing snorkeling. We spent the afternoon snorkeling around the entire island, and relaxing under a few palm trees. 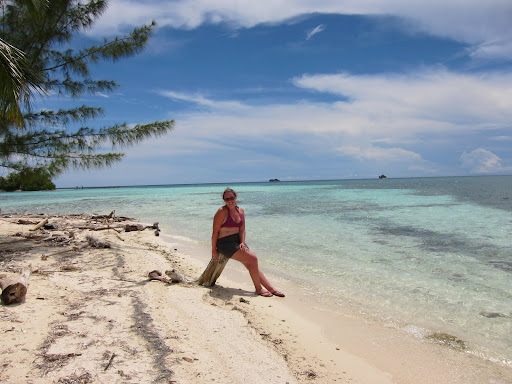 There wasn’t much in the way of entertainment on the Cays.  Just a couple small restaurants and a bar or two.  Without cars, internet access, TV, or any of the other usual distractions, we spent most of our time relaxing on Captain Morgan’s dock, reading our books.  It was great to have time to unwind, especially before our epic three-day journey south to our fourth country – Nicaragua.

You can view all our photos from the Utila Cays in our gallery.

2 thoughts on “Diving & Snorkeling off the Utila Cays”