This is Part 2 of our trip with Red Earth Safaris from Perth to Exmouth. You can also read Part 1.

We packed up and left Denham early on the start of day 4, in order to make it to nearby Monkey Mia, which is also a part of the Shark Bay World Heritage Site and Marine Park. Here, tourists pack the beach each morning to watch volunteers feed the resident dolphins. These dolphins have been fearlessly approaching the shore and interacting with humans for many years. 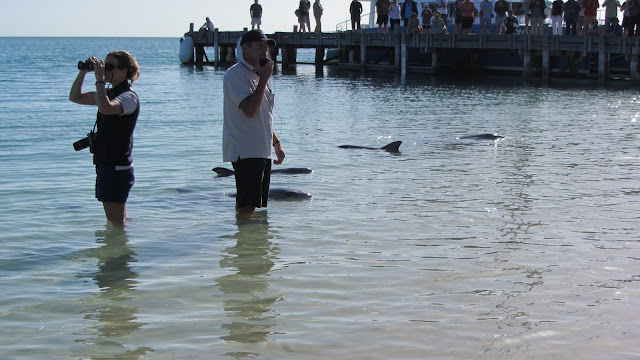 As we lined up along the beach, we were shocked by how many people were there for the feeding. There must have been hundreds of tourists, 4-5 rows deep, vying for a front row position. It took a little while for the dolphins to show up, but within 15 minutes of the designated time, we spotted fins in the distance. Soon we had a small group of dolphins zipping parallel to shore, only a few feet away. A couple lucky members of the audience were even selected to help feed them. 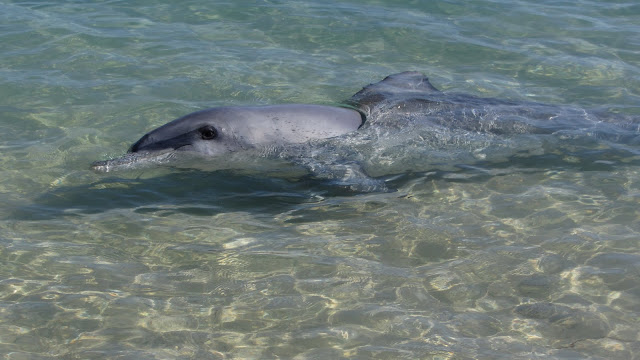 Originally, we had hoped to volunteer here, helping to feed the dolphins and observe their behavior. We emailed the Shark Bay Dolphin Project a few weeks before arriving in Australia, but there were no open positions. It turned out to be a good thing in the end though, as we were less than impressed by what we saw at Monkey Mia. The dolphins are not exactly “wild” since they have become accustomed to the regular feedings, and it would appear these shows are more for the benefit of the hordes of tourists than the dolphins. Whats more, if we had volunteered we would never have gone on Terry’s tour – which was one of the best things we did in Australia! 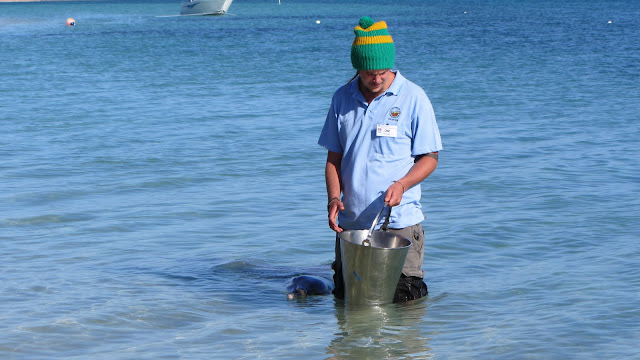 We spent the rest of the day making our way north, through Big Sky Country and the great outback. There is a whole lot of nothing out here, and we traveled for hours without seeing any sign of civilization – not even a cell phone signal. 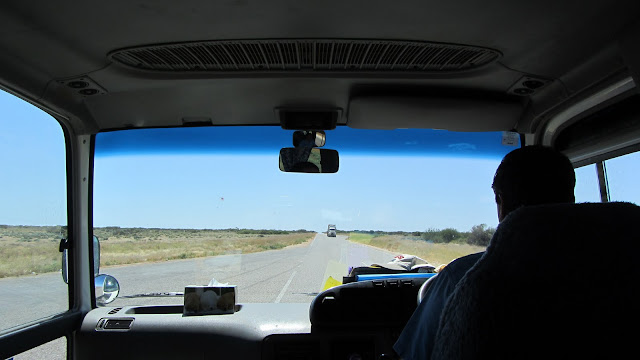 Along the way we motored down the second-longest completely straight road in Australia (the longest is also in WA!), played trivia games with our busmates, and stopped at some isolated Roadhouses. We were shocked how expensive items were at these remote outposts – since they are the only place for miles, they can get away with charging an arm and a leg, even for basics. 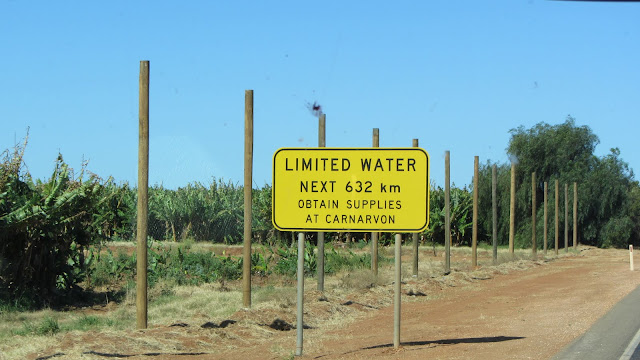 We were in for a real treat that evening as we would be staying at an authentic outback sheep shearing station, complete with a private beach! The accommodation was basic, but the experience was unforgettable. After hanging out on the beach, Terry prepared a delicious dinner of roast chicken, with all the trimmings. Next, we built a campfire and dragged our beds outside to sleep under the stars. It got a bit too cold and windy for Heather and I, so we eventually moved inside. Still, she had a shock when she headed to the bathroom block in the middle of the night and crossed paths with a huge Red Kangaroo. 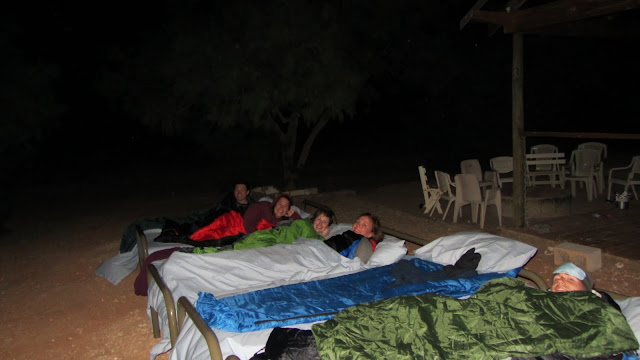 The next day brought us to stunning Coral Bay, home to the Ningaloo Reef – Australia’s other barrier reef system. While not nearly as popular as the Great Barrier Reef off the East Coast, many think Ningaloo is even nicer. We went on an ATV tour, which had us screaming over the sand dunes, checking out some beautiful secluded beaches, and snorkeling around a bit of the reef. 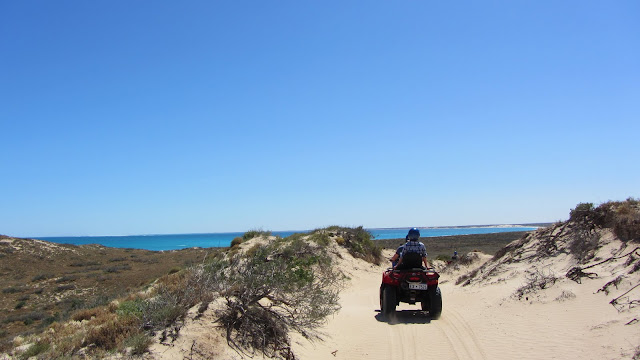 Finally, we arrived in Exmouth, the northernmost point on our West Coast adventure. This town was built to support the US Navy, which maintained a submarine base here during the Cold War. Nowadays, it’s famous for its abundant marine life, beaches, and spectacular diving.

The Navy Pier dive site is supposed to be one of the best in Australia, and despite the hefty price tag ($100 per dive), I decided to check it out. It’s a bit unique in the fact that this site is entirely man made; the US Navy built the pier in order to establish the Exmouth submarine base. It happens to sit off a point where two predominant currents meet, and this (together with a ban on fishing) results in a rich marine environment, teeming with life. 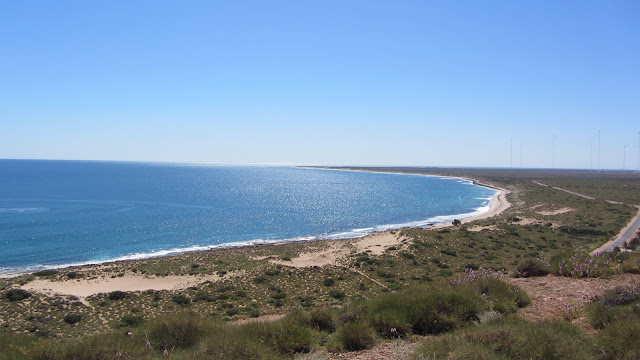 As promised, the two dives at Navy Pier were fantastic – my best yet. As we arrived at the site, a big Manta Ray was seen passing close by and a couple of migrating Humpback Whales breached right off the end of the pier. In fact, during both dives I could hear an eerie and beautiful soundtrack of Humpback Whale songs.

Both dives were like a non-stop conveyor belt of fantastic sites. Among the highlights: sharks (lots of them!), stone fish, eels, and huge schools of circling jacks. There was even an enormous 80kg grouper, that was very friendly and followed us around like a dog. The local divemasters have become so familiar with him that he’ll even inch in and allow you to give him a little scratch under his chin. 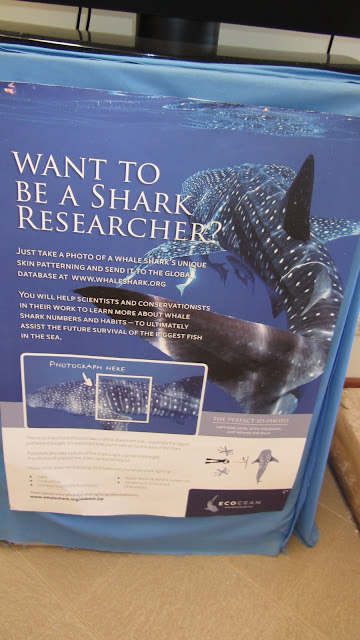 Sadly, we were not in the area for the annual congregation of whale sharks. Between March and July, it’s possible to join tours which guarantee sightings of whale sharks, giving you the opportunity to snorkel and swim with this gentle and gigantic fish. Yet another reason to return to one of the most beautiful and pristine parts of Australia.