We had first heard about Pucón and the Villarrica Volcano all the way back in Nicaragua, and it was one of the things we were most looking forward to in Chile. On the active Volcan Cerro Negro outside Leon, Nicaragua, we hiked to the top carrying a sandboard, which we used to slide down the loose black sand and gravel slopes at high speeds. Volcan Villarrica offers a similar thrill – sledding down its perpetually snow-covered sides using a small plastic sled.

To top it off, the volcano has one of the world’s only lava lakes in its crater, which under the right conditions can be viewed after a 5-6 hour climb to the top. Having been cheated out of seeing lava at both Volcan Pacaya in Guatemala and Volcan Arenal in Costa Rica, we were excited about the possibility of finally spotting some up close! 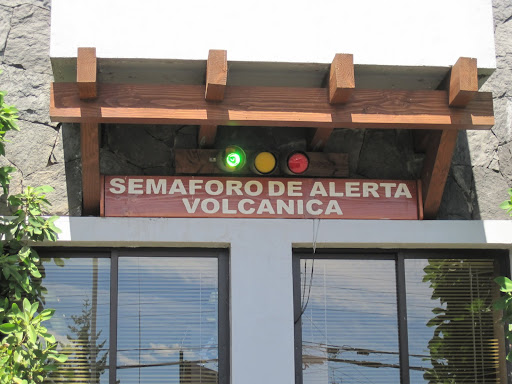 Luckily, the climb is not technically difficult and the top is “only” 2,840m (9,318 ft), though crampons, an ice axe, and appropriate clothing are required to make the ascent. We were a little concerned since we had never used this sort of equipment before, but were assured anyone in reasonable shape can make it up Villarrica and two guides would be with our group in case anyone needed to stop or turn bank. In addition, the first hour of the climb can be circumvented by taking a chair lift to the top of the ski area which operates on the lower part of the volcano’s slopes during the winter months.

Climbing the volcano is a popular activity in Pucón and there are dozens of companies offering the trip. We picked one of the cheaper ones, Chile Expeditions, which charged $70 per person for everything – including the ice equipment, gloves, hats, hiking boots, wind breaker, and pants. 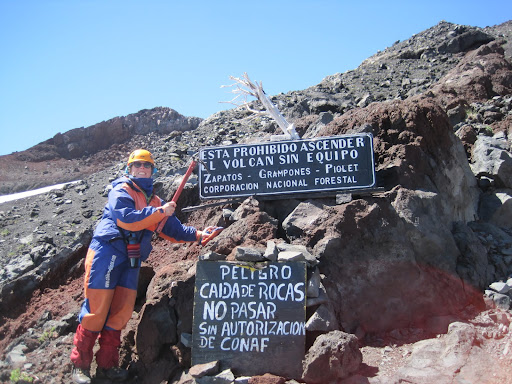 Unfortunately, the weather was not cooperating, and our first couple days in Pucón the area was covered in clouds with light rain. We were advised to wait until Friday, when the weather reports looked better.

By Thursday afternoon, the weather did indeed appear to be improving, so we stopped by Chile Expeditions office to ensure we would be scaling the volcano the next day. They told us we were on, and had us get fitted for the gear we would be renting.

That night, Valentina, the owner of the small hostel we were staying in, knocked on our door at around 10pm and told us to come outside. Looking towards Volcano Villarrica, we could see bright orange trails where lava was shooting out the top. Valentina assured us we were lucky – activity like this hadn’t been seen in a few months and we would be able to see lava the next day! 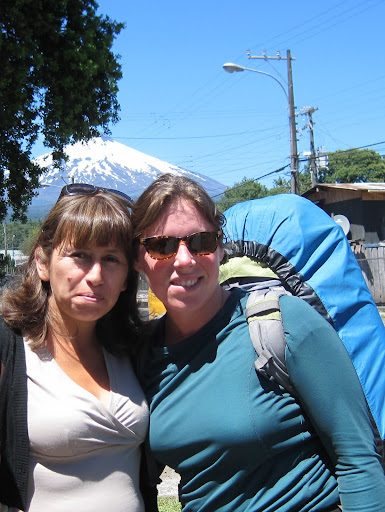 The next day, we woke up early to a perfect, cloudless day and met our guides at the agency. During the 30-minute ride out to the volcano, we picked up four other climbers just outside of town.

We arrived at the base of Villarrica and parked near the main lodge, surrounded by inactive chair lifts. Unfortunately, we found out that the lift that we expected to take us higher up was also not running today, and that we’d have to spend a little extra energy hiking an extra hour up from the parking lot. 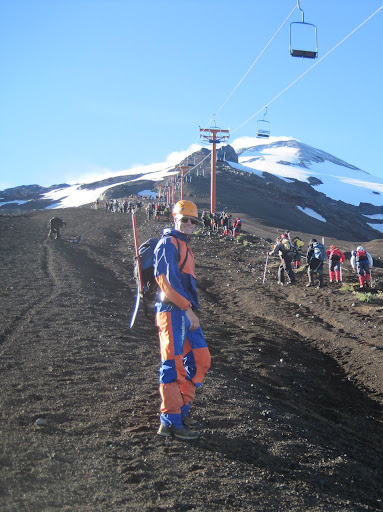 Joining a long line of other climbers from different companies, we started the ascent. Our guides advised us to walk slowly but steadily, in order to conserve energy so we would be able to both ascend and descend. 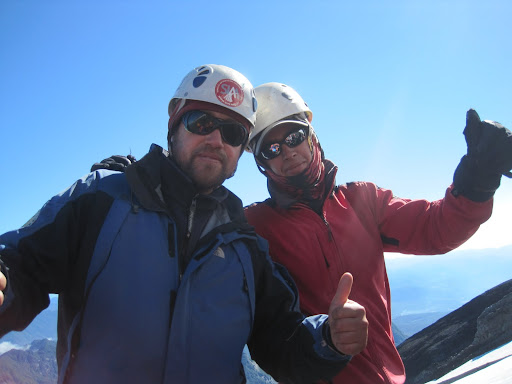 We followed the inoperative chair lift, and took a break at the top of the lift, soaking in the magnificent view on the still cloudless day.

From here on up, the volcano was covered in snow and ice, so the guides came by and attached our crampons one-by-one. They also showed us how to use the ice axes, and how to arrest ourselves if we started sliding down the sides. 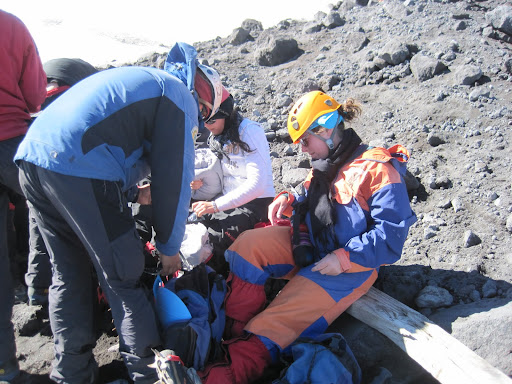 A little higher up, we passed the remnants of an old ski lift, which was destroyed in the large 1971 eruption of Volcan Villarrica. 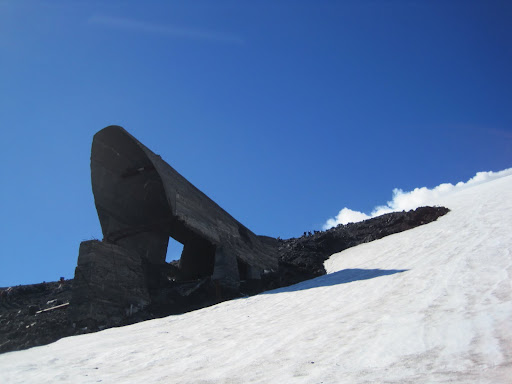 The wind was picking up slightly, so the guides warned us we might get blown around a bit. Still, the sun was shining and we were having fun climbing up and taking the occasional rest for photo opportunities. 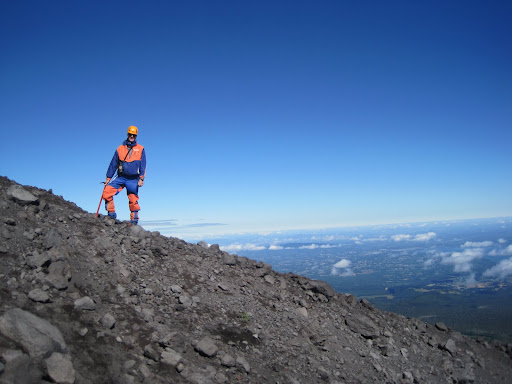 But then, in an instant, everything changed.

Strong winds starting battering us with small ice pellets, the sun disappeared, and we suddenly found ouselves in the middle of some very serious weather. The guides instructed us to crouch down, with our bums on the mountain, and back to the wind. The small bits of ice hitting us at high speeds was very painful – it felt like we were getting sandblasted – and we tried our hardest to keep it from hitting our faces and other exposed areas.

There were small breaks in the ice storm, and we were still holding out hope this would all pass. But, after a few failed attempts to keep moving, the guides turned us around and brought us back down a bit, behind a large rock. Reports of falling rock had been called in on the radio, and a group of climbers higher up were reporting some sort of emergencies. 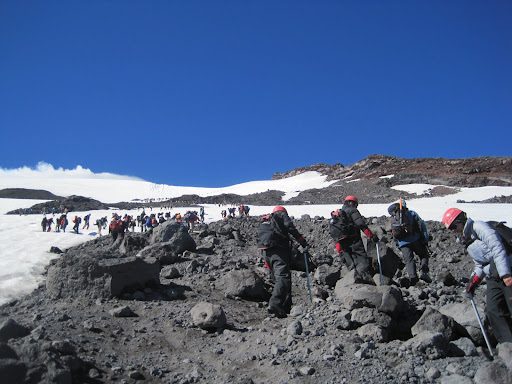 By now, our smiles had disappeared. We were genuinely scared and wanted to get off the mountain. The winds were so strong now that they were occasionally knocking me over and making the descent very difficult. Our guide estimated the winds were at least 60 kph, and would be even stronger higher up the volcano.

That was it – we wouldn’t be making it to the top.

While we were sad about not making it to the top, the guides still let us slide down the snowy parts of the slope. Conditions were good enough that we didn’t even need the plastic sleds we were transporting, and were able to slide down right on our bums, using the ice axes to slow ourselves down. 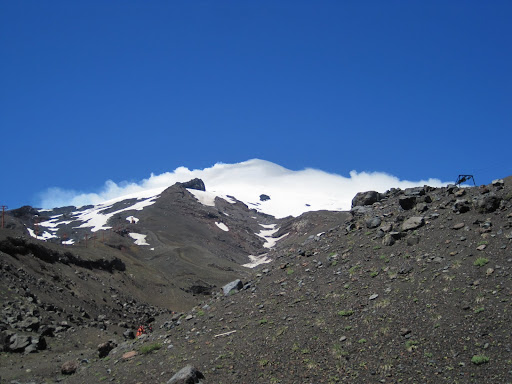 Sliding down was extremely fun and we can only imagine what it would be like to come back down the entire volcano like this – it takes 5-6 hours to climb, but only 30 minutes to slide down!

Unfortunately, Chile Expeditions did not offer us any sort of refund or the opportunity to ascend for free (or at a discount) another day. Heather tried to convince me that we should try again, but I couldn’t bring myself to go through it all again, just to see our hopes dashed again.

The good news is that there is more to do in Pucón than just the volcano, and we really enjoyed exploring some of the other activities the town has to offer, such as the many geothermal hot springs and the beautiful Lake Villarrica, which the town is situated on. 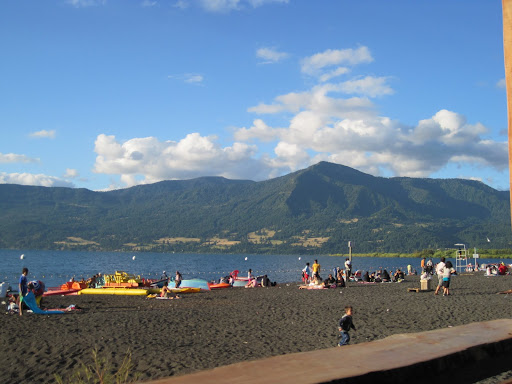 Still, though, we were disappointed. Everytime we looked at the volcano, visible from everywhere in Pucón, we once again felt cheated about not making it to the top and once again not seeing lava.