The Paharganj backpacker ghetto near New Delhi’s railway station is famous for its cheap guesthouses and rooftop cafes. But there is more to this bustling neighborhood than the backpacker haunts, and one of the best ways to get acquainted with it is through one of Salaam Baalak’s tours.

Salaam Baalak is a charity which helps Delhi’s street kids – many of whom live in the Paharganj neighborhood. I joined their City Walk Tour bright and early one morning, meeting at the southern end of the railway station. The 3 hour tour includes a walk around the railway station and through some of the narrow back alleys of Paharganj, before finishing at the trust’s head office where it is possible to meet some of the children staying in their shelter. The tour comes with a suggested minimum donation of 200 Rupees (US $3.50). 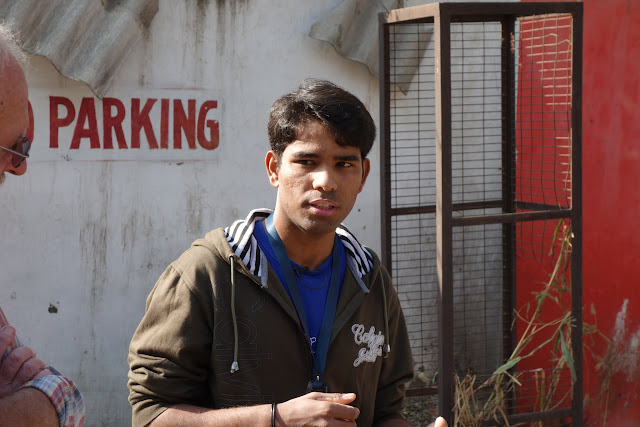 Our guide, Iqbal, a former street kid who was taken off the streets by Salaam Baalak Trust, introduced himself and set some ground rules for the tour. He then explained how children end up on the street here and what they do to survive. Many of Delhi’s street kids are escaping abusive homes, hoping to find a better life on their own. Sometimes, their own families kick them to the streets, including many little girls that are seen as too expensive (Indian families must pay a substantial dowry to the groom’s family when their daughters get married). 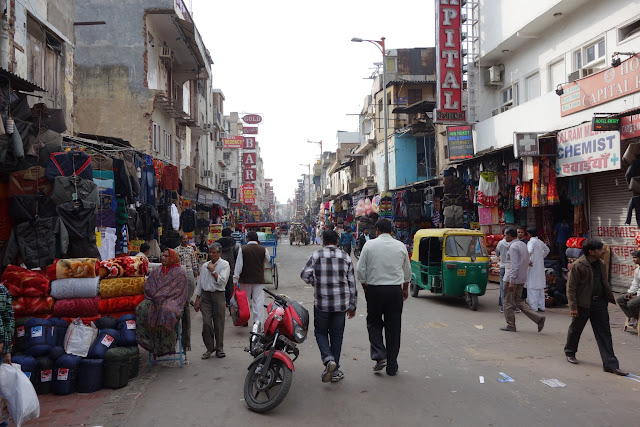 Paharganj’s hectic back alleys are full of all sorts of bizarre sights. Iqbal pointed out some of the wackier things here, including the tangled mess of wires running overhead. 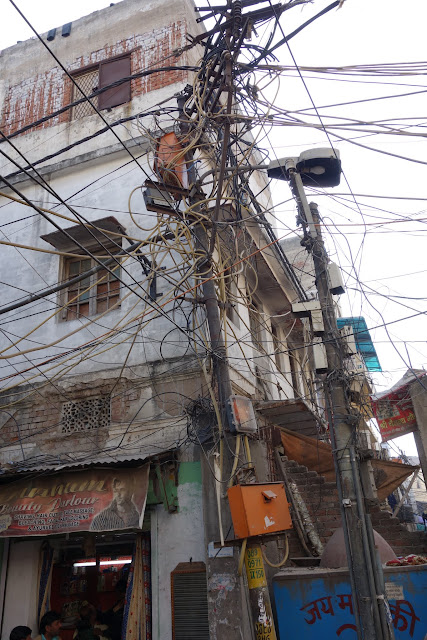 In one small alleyway, graphic depictions of important figures from different religions adorned the walls. What was this all about? It turns out, too many men were using this wall as a public urinal. The religious figures were placed here to discourage this action. 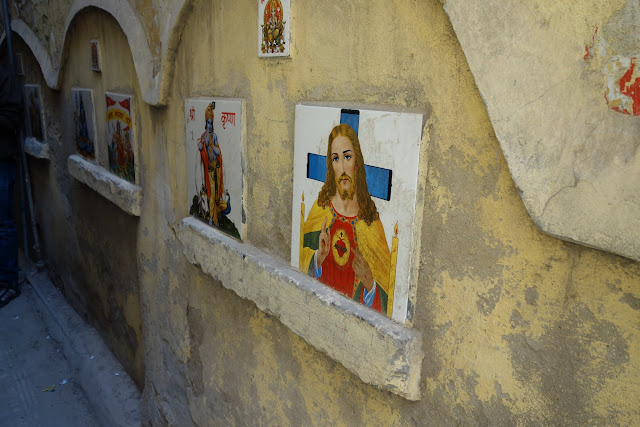 Many street kids collect and recycle trash. We stopped in at one recycling center, where the trash is sorted and rebundled. 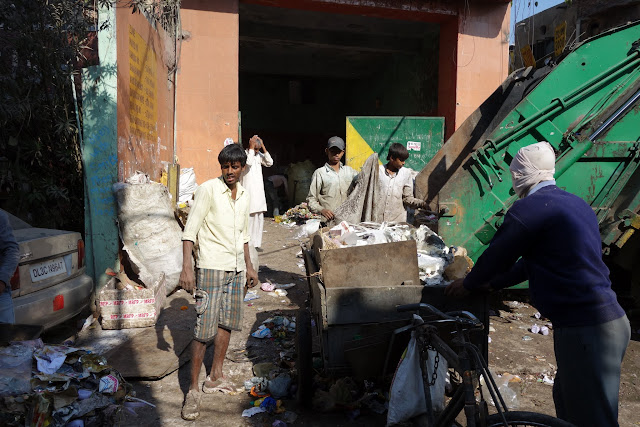 If you venture far enough, there are even some quiet and beautiful areas in Paharganj. We checked out some traditional buildings that are hundreds of years old, complete with intricately carved doors and windows. 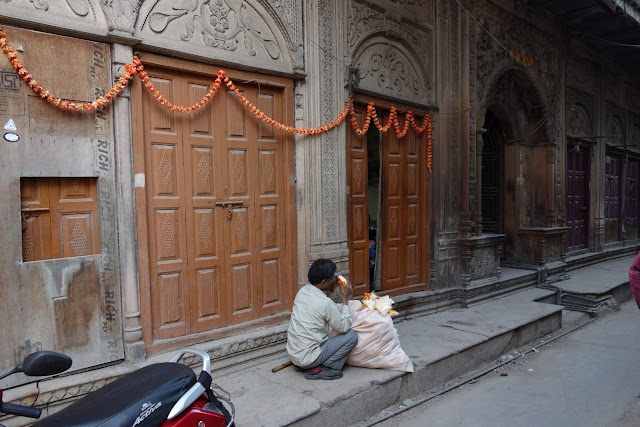 Finally, we arrived at the Salaam Baalak Trust main office, where we were able to meet some of the boys they are helping take off the streets. It’s a slow process – they start by giving the children a safe place to spend their daytime hours, keeping them entertained with fun activities and offering some basic educational classes. Eventually, they are moved into shelters where they can spend the night. Finally, they look to place them back with their families (if it’s a safe environment and they ran away for other reasons) or with foster families and other NGOs. 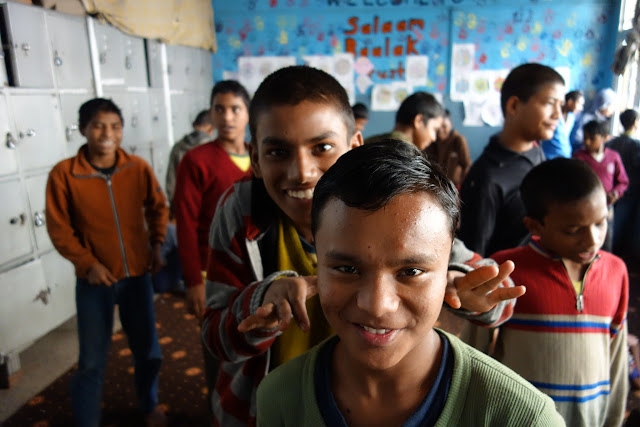 Salaam Baalak runs a number of different shelters around the city, with separate facilities for boys and girls. Each year, they help thousands of street kids. 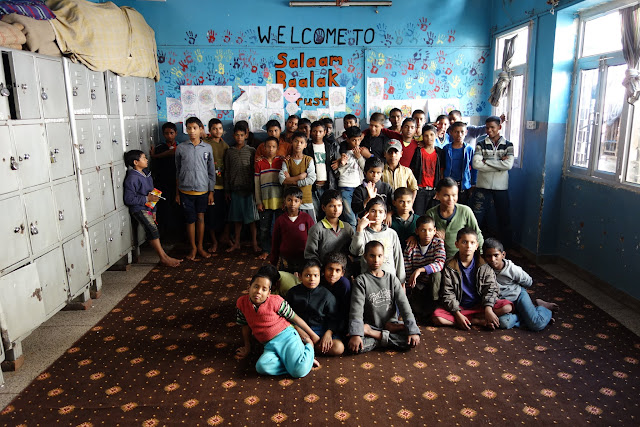 The little boys we got to meet were between the ages of 5 and 13. After they performed a dance to a Bollywood song, we got to play with them. They really enjoyed getting their pictures taken.

Without organizations like Salaam Baalak, these boys would have little chance of getting off the streets. Sadly, many street children become drug addicts and resort to petty theft. For this reason, Iqbal suggested never giving money to child beggars. In addition, he said it’s best not to give them unopened food – which they can then sell or exchange for drugs. The best thing, he said, was to give them food from an already-opened package. 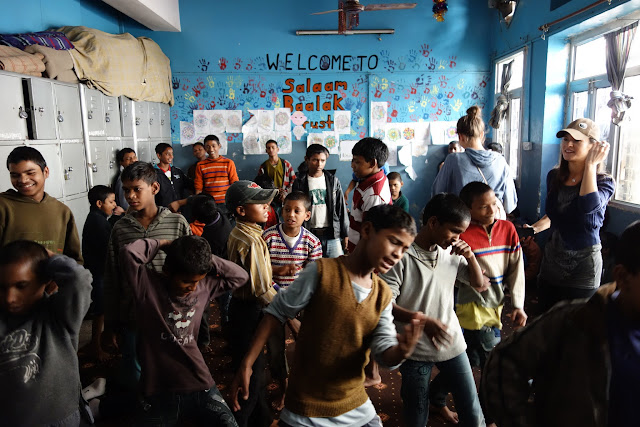 I was originally unsure about this tour – if they were turning the sad lives of these children into a tourist attraction akin to a “human zoo.” It pays to research organizations like this carefully, as there are a number of fake and abusive orphanages set up by unscrupulous characters which milk well-intentioned tourists. Salaam Balaak Trust is the real deal, and worth your time (and money).

For more information, you can visit the Salaam Baalak Trust website.