We left ancient Ayutthaya on a daytime train headed to Thailand’s main northern city, Chiang Mai. After a couple of fairly good experiences on the Thai rail network, we were looking forward to our train journey. Unfortunately, this time we were not so lucky. After crawling out of the station, we soon found our train stalled at the very next station, with vague “technical difficulties” cited. Hours upon hours of delays started piling on top of each other, with tons of random stops and breakdowns. Eventually, we were transferred to a bus for the final leg of the journey, arriving some five hours behind schedule.

On the plus side, once we finally made it to there, we found ourselves in a fantastic guesthouse in the old part of town. Even though it’s Thailand’s second largest city, we found Chiang Mai to be a pleasant and peaceful place, filled with delicious food and interesting historic sights. 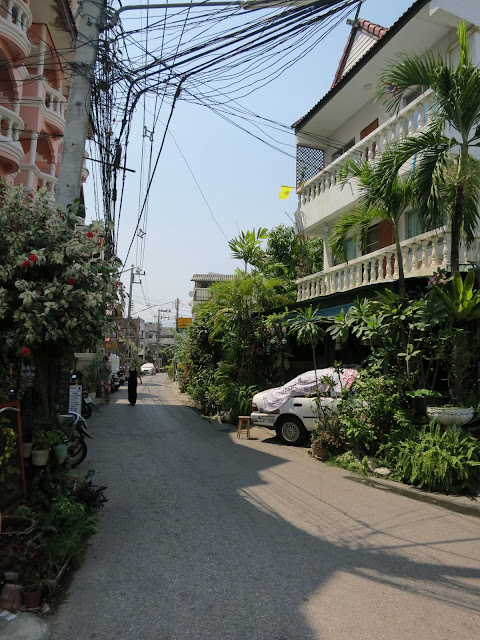 Northern Thailand has its own distinct culture and cuisine, borrowing heavily from surrounding countries in Southeast Asia. One of Chiang Mai’s culinary specialties is Khao Soi, a spicy Burmese influenced noodle soup. We went crazy eating this yummy dish, consuming it at least once a day from the many local restaurants and street food vendors. 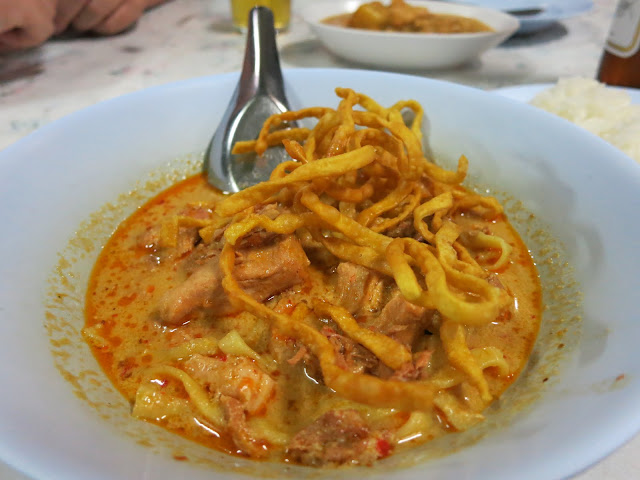 Another local specialty is Chiang Mai sausage, a grilled spicy pork sausage. It can be found all over the city, in huge curled links slowly cooking at hundreds of market and street-side locations. 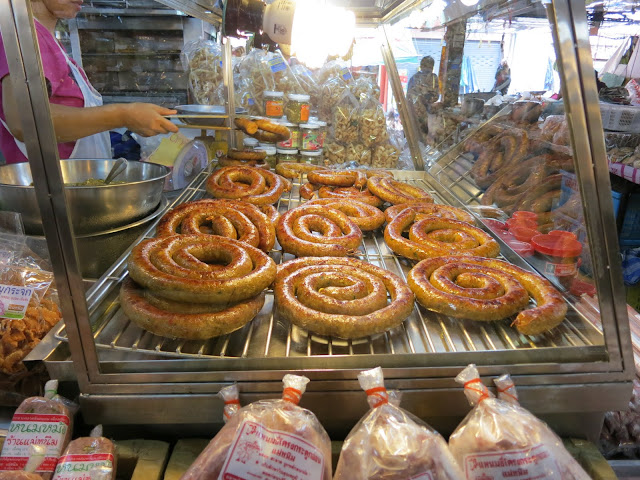 One of the best places to sample all of these delicacies is the weekly Sunday Night Market, when the major streets cutting through the old city are shut down to traffic and sellers offering clothes, jewelry, and trinkets line the sidewalks. 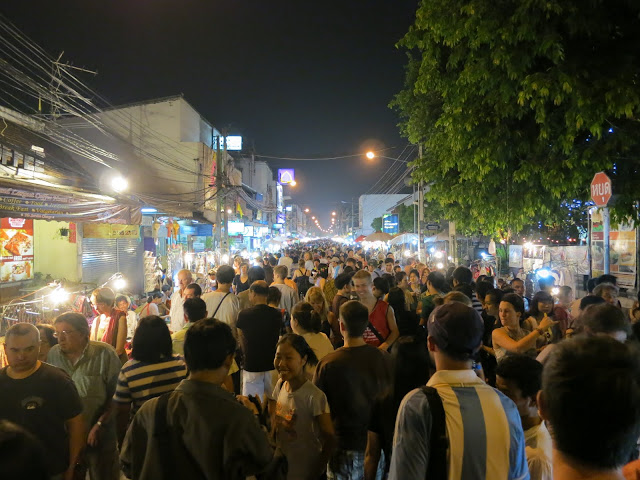 A couple different food courts spring up around the market, including one centered around a beautiful Buddhist temple. We took great pleasure sampling all the different foods on offer, from sausage to khao soi to neon-colored desserts. 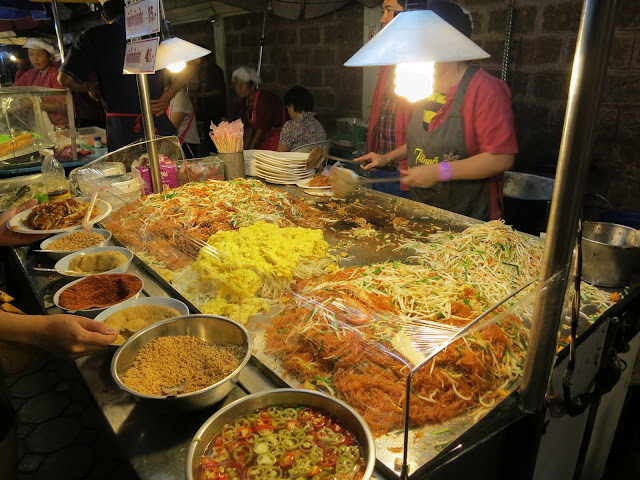 Not only content with devouring all these yummy treats, we decided to take one of the many cooking classes the city is famous for. Our class started mid-morning at one of the vibrant markets, where we bought supplies for the dishes we would be preparing and learned about the fresh ingredients central to Thai cooking. 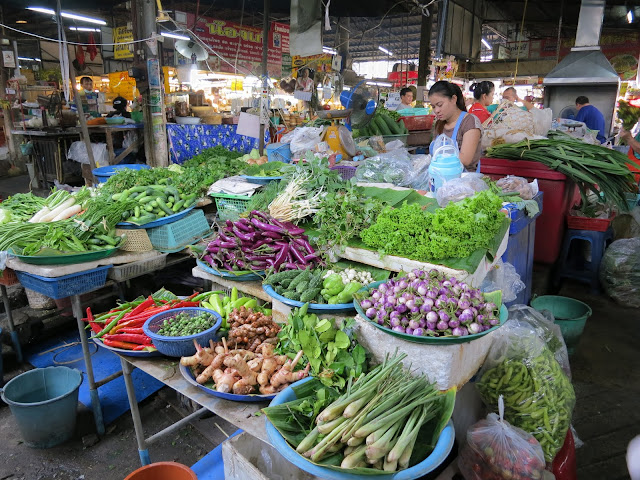 Then we got to work slicing, pounding, and grounding all sorts of delicious dishes, among them our beloved khao soi, pad thai, spring rolls, and finishing off with banana in coconut milk. 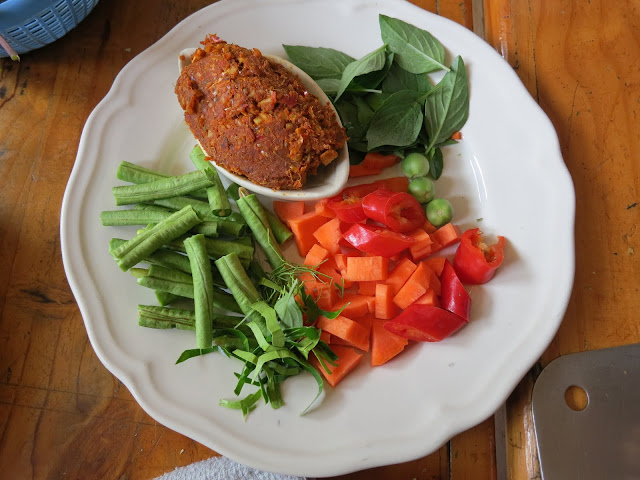 Along the way we also learned some basic techniques for ornamental carving of vegetables, an old tradition previously reserved for Thai royalty. 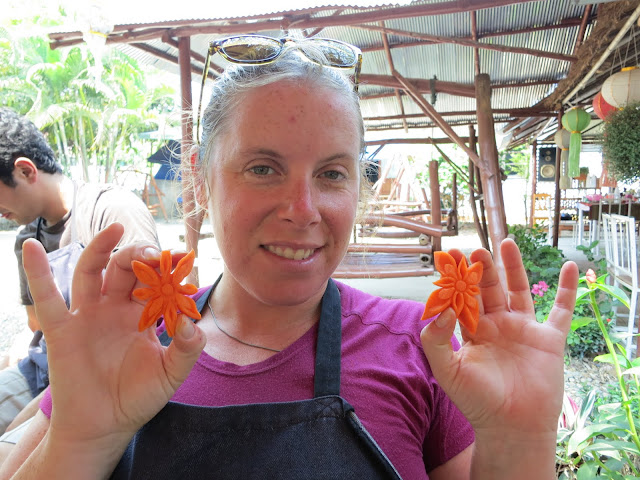 The most exciting part of the day was when we cranked up our woks and nearly singed our eyebrows from the hot ball of fire that shot towards the ceiling. 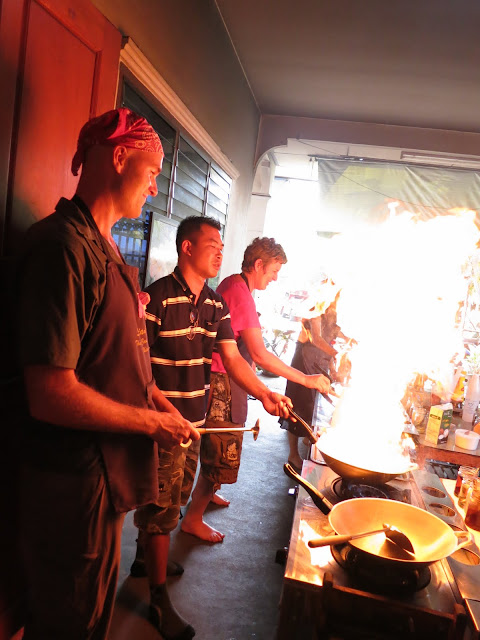 Despite packing a bunch of leftovers, we were still completely stuffed by the the end of the day. Still, we were glad we had learned to make so many of the excellent dishes we had grown to love traveling the country. 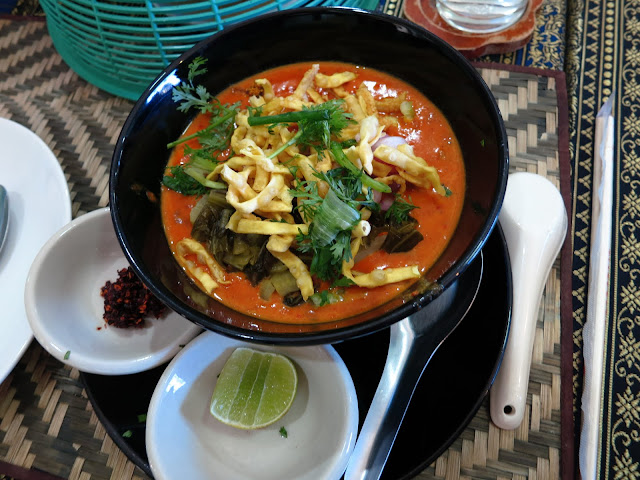 No visit to Chiang Mai would be complete without a visit to the Doi Suthep temple, 15km from the city center and situated at the top of a 1,600m hill. The weather had been fairly hazy, so we waited for a clear day before hopping in a series of shared songthaew taxis to make the journey uphill. 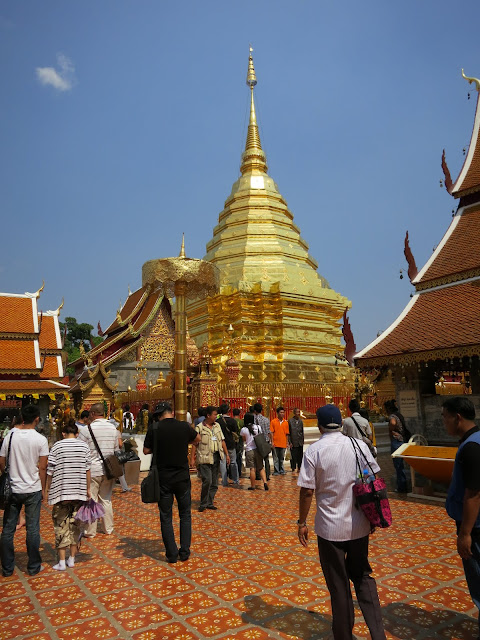 At the top, we were treated to great views of the area along with the glistening temple. 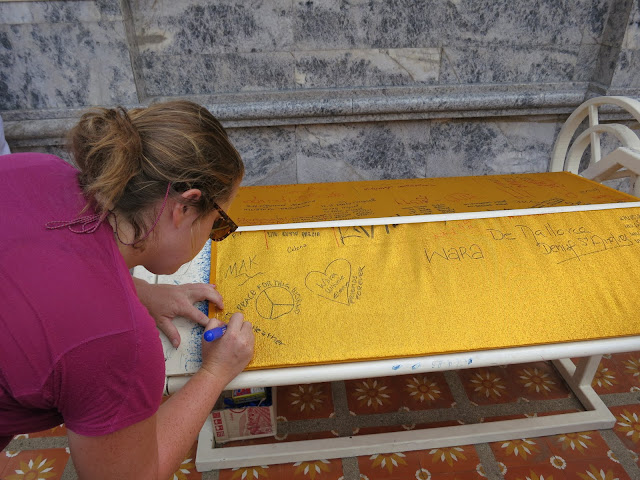 Heather and I decided to get our fortunes, which can be determined by shaking a can of chopsticks. You then match the number printed on the first chopstick to drop out with a pre-printed fortune found on the wall. My fortune hinted at good things to come, but Heather wasn’t too pleased with hers. 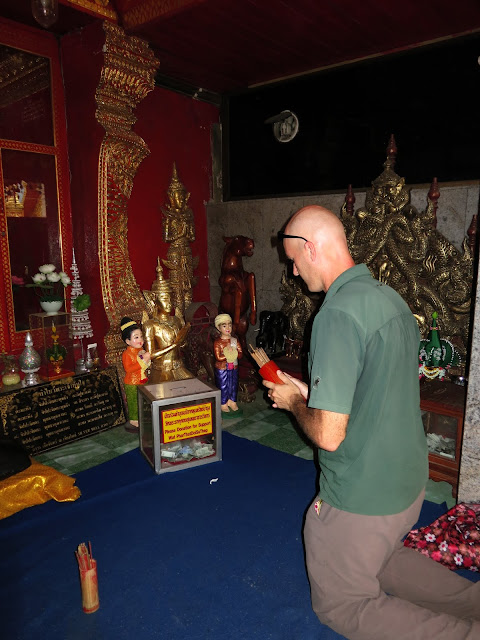 After more than a week in Chiang Mai, we were ready to roll up our sleeves and help volunteer at the nearby Elephant Nature Park, where we would be caring for these gentle giants in the nearby foothills.

1 thought on “Cooking and Eating Our Way Through the Pearl of the North – Chiang Mai, Thailand”