Before visiting Guatemala, I don’t think either one of us had seen, let alone visited an active volcano. Although there are apparently 169 volcanoes in the United States, there are only 18 high-threat volcanoes, and they are all situated in Alaska, Hawaii & along the West Coast. Since I grew up an East Coast girl, I hadn’t had any volcano contact in my life. Until Guatemala. We had heard that Volcan Pacaya, just an hour outside of Antigua where we were studying Spanish, was the thrill of all volcanoes. It has been extremely active for the past 5 years and visitors can get extremely close to huge lava rocks and rivers of red hot lava, all without signing a single safety form.

We had heard from other travelers along the way who had visited Pacaya that it was an incredible and exciting experience, but also very dangerous. Tourists, locals and even tour guides injure themselves (sometimes, fatally) while daring to explore this dangerous beast. Although usually a cautious girl, I was instantly enamored with the idea of seeing lava at Pacaya. While we were wrapping up our travels in Mexico, at 8pm on May 27, 2010, Volcan Pacaya erupted. It rained down huge rocks, spurted lava and spread inches of ash over a wide area, closing the country’s principal airport in Guatemala City for nearly a week. One of the first news reporters on the scene was killed by falling volcanic rocks.

When we arrived in Antigua just three weeks after the eruption, visiting Pacaya was the “hot” topic on the street. It was dangerous before the eruption and afterwards the thrill still seemed to attract many a tourist and daredevil. As we walked through town, surprisingly there were several companies advertising tours to visit this freshly erupted volcano. Friends of ours who had visited Pacaya just two weeks before the eruption felt in extreme danger and had a feeling that an eruption was imminent. But, they had a great story and the pictures to prove it.

People in our shuttle van to Antigua planned to find an illegal tour to the volcano the very next day. We went back and forth about it and ultimately decided to wait and see if it settled down and became a bit safer. We saw on Facebook the next day the fantastic lava photos our new friends had posted. Dangerous – yes. But they had the experience and the photos. Erik thought we should check with the most reputable tour company in town that hires experienced hikers to take tourists up several volcanoes in the Antigua area. They were not running tours to Pacaya and said that it was extremely dangerous and that they wouldn’t go if someone paid them to.

Eventually, we decided to go, and chose to go on the more costly tour where you were “guaranteed” to see lava. Forty dollars and an hour and a half later, we got our first look at the smoking cone. We knew ahead of time that this was even more dangerous than it was before the eruption. Our shuttle driver had to pay a farmer whose crop had been ruined for our access to the “park.” But, this wasn’t true since the official park was closed due to the extreme danger. The black lava trails that were still smoking streamed down the side of the volcano and far out into what used to be the farmer’s fields. 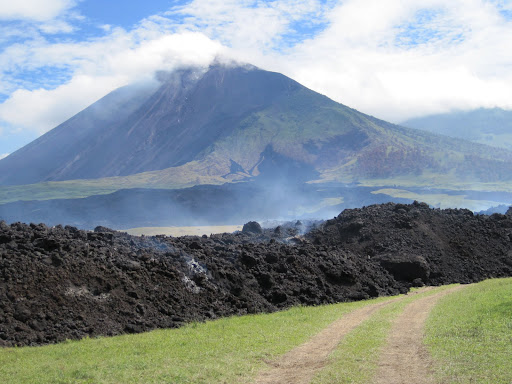 After a half-hour climb with our 16 year old guide and without the promised “security” of a gun-toting guard due to increased robberies on the volcano, we stepped onto the hot, hard, sharp lava. We followed our guide and held our breath until the moment we saw the red hot lava. And this was all we saw: 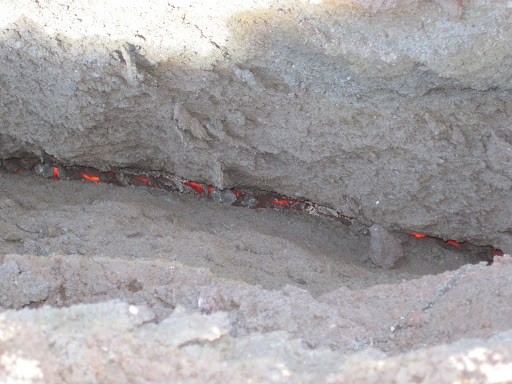 That is the only lava we saw that day. Our friends who had jumped off the shuttle van and booked a tour the next day got to see Pacaya’s lava. We did not. 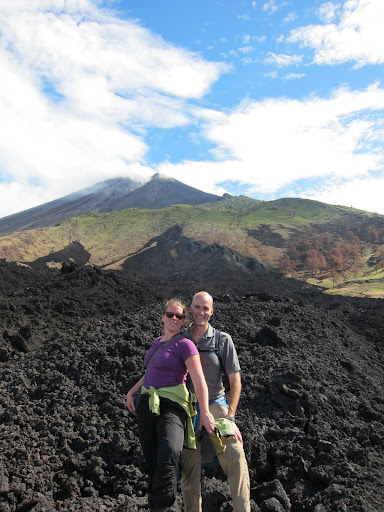 Although it was impressive to see the aftermath of Pacaya’s recent eruption, we were understandably disappointed not to see the lava we had been guaranteed.  That said, there are plently of volcanoes we’ll pass further along our travels, so here’s hoping we get to see the hot red stuff, and live to tell about it.