Our love affair with volcanoes took us to the very alive and active Bromo Volcano in Eastern Java. We arrived just before sunset and our guide took us to a panoramic lookout for beautiful views of the area, peppered with volcanoes. We could peer down into the old volcanic caldera, now a sandy flat pit, and home to the three famous newer volcanoes. From there, we could see volcanoes Batok, Semeru (Java’s highest mountain at 3,676 m) and Bromo, which we would be climbing very early the next morning. 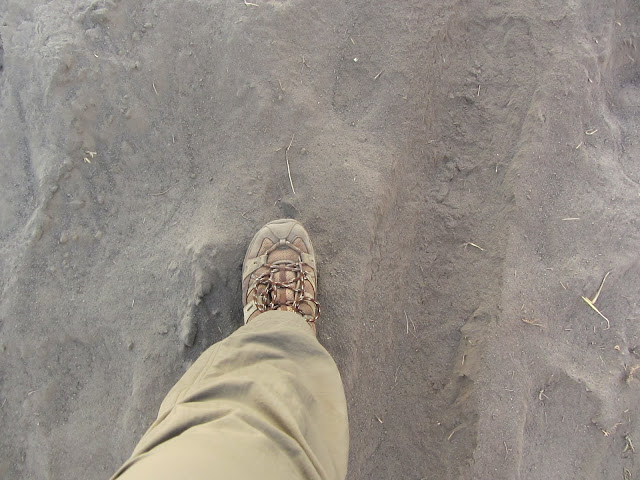 4:00AM – The jarring alarm wakes us from our slumber. We force ourselves to get dressed and eat breakfast, despite the darkness. Our 4WD tour departs at 4:30am and we’re on our way thought the hazy fog towards the Bromo volcano. Out of sheer luck, we happened to be visiting on the biggest day of the year for the local Tenggerese people, when they come to the volcano to make their yearly sacrifices as part of the festival of Yadnya Kasada. On this day, these Hindu people of Probolinggo (a minority in Muslim-dominated Java), travel up the mountain to make offerings in the form of foods and flowers and even sacrifices of farm animals to the mountain gods by throwing them into the caldera of the volcano. This ritual started way back in the 15th century based on an ancient legend of a princess named Roro Anteng. Her and her husband were unable to have children and prayed to the mountain gods for help. The gods blessed them with 24 children, but demanded that the 25th child was to be thrown into the volcano as a human sacrifice. The couple complied and so began this sacrificial tradition which still occurs each year at Bromo. 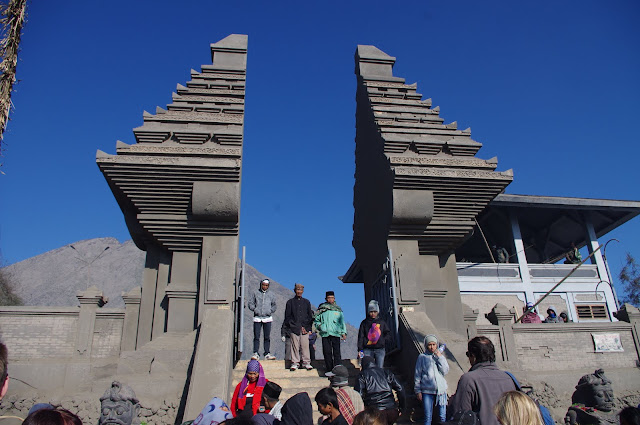 Our 4WD first took us to a climb of Mount Pananjakan for the sunrise view over the volcanic landscape. It was a bit of a tough climb in the dark, but with our headlamps leading the way, we made it to the lookout for a stunning view of the sunrise licking the tips of the volcano as an eerie fog hugged the sand landscape below. Photos don’t really do it justice, but the view was chilling and spectacular. 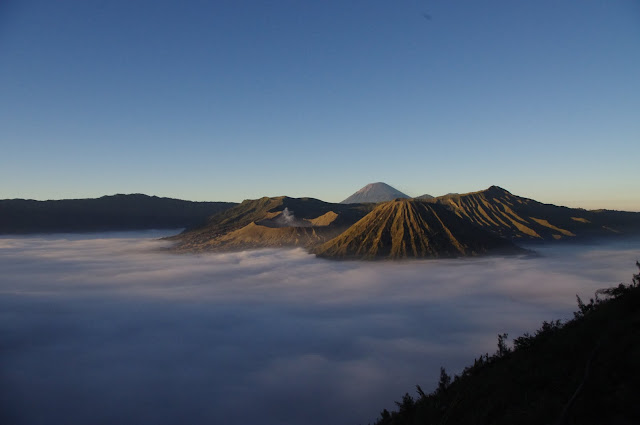 Next, we were dropped off down in the sandpit below in a dense fog. I’m not sure exactly how our driver could see where he was going, but somehow we made it to the drop off point. We were told we could walk the 15 minutes to the volcano’s base or take a horse ride for an insanely high price. We had read about this ahead of time and knew it wasn’t that far, so we opted to walk. 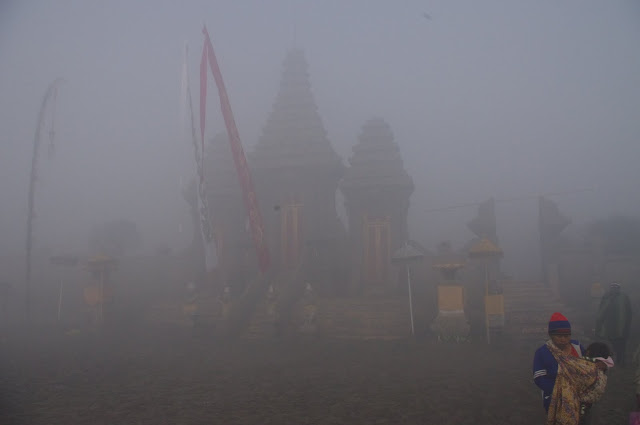 A decision we would soon regret. The morning fog was extremely thick. And the added bonus of thousands of people flocking to the volcano for the sacrificial festival just compounded the situation. But it also helped us. We followed the locals, since we knew they were all headed where we wanted to go. 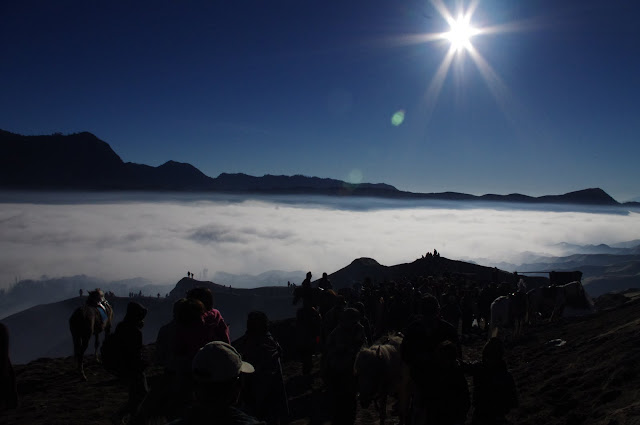 After what seemed like much longer than a 20 minute walk to Bromo’s base, we had made it! Now, the only thing standing between us and Bromo’s crater rim were the 245 steps that have been built to make the climb easier for locals and tourists alike. We joined the masses and slowly made our way up. Others passed us with their offerings, some only wearing flip flops.

Once atop the volcano, a very special and uniquely bizarre scene awaited us. Shoulder to shoulder, people sat, stood and kneeled along the craters edge praying and tossing in their offerings. Trying our best not to disturb anyone, we squeezed our way along the narrow crater, trying to keep our footing, even as loose volcanic sand slipped from under our feet. 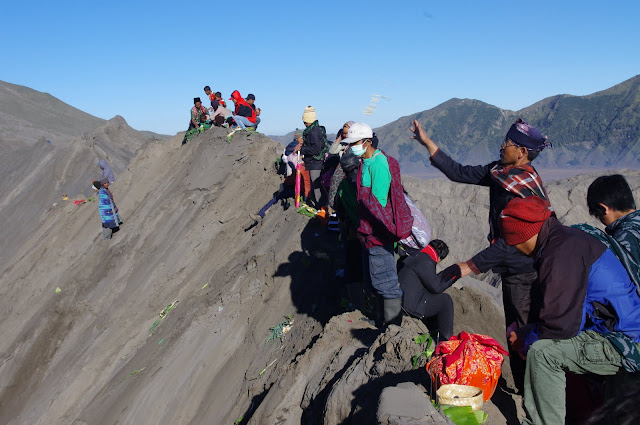 Erik captured some fantastic moments in his photos taken with his new SLR camera. As people prayed and lit incense, they tossed their various offerings into the steaming volcano. 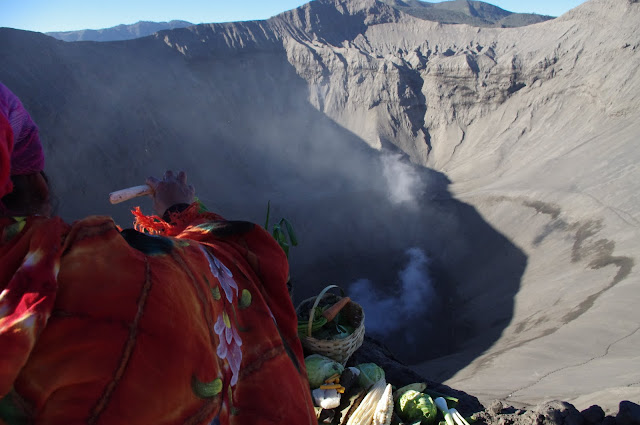 This volcano, like many in Indonesia, is still very much an active one. As we stood on the narrow crater rim with the local Hindus making offerings, there were others that braved the climb down into the volcano to catch the offerings of food and other useful items.

Dangerous as it was, I suppose some feel a prime opportunity for free food is worth the extreme risk of tumbling into the steaming volcano below. 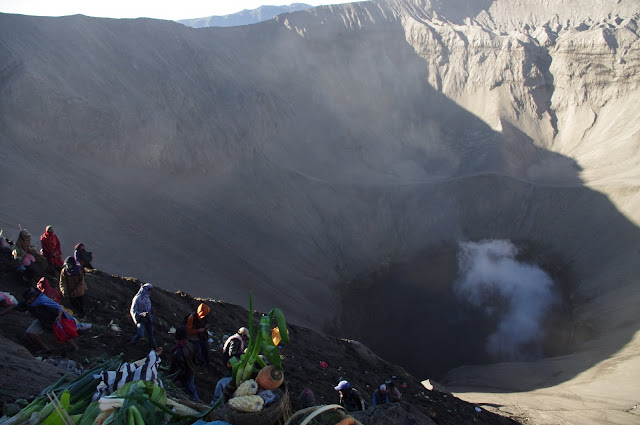 We had experienced a very tender and special ceremony on the volcano that day. Every volcano climb is a special experience to us, but we will not soon forget that beautiful sunny morning, standing along the crater of Bromo, witnessing this precious ancient Hindu tradition.