Before Heather and I set off on this trip, I had it in my mind to propose to her sometime during our time in South America. Originally, I thought this might be when we reached the southernmost part of the American continent in Ushuaia. As we were traveling through Patagonia, though, we began putting together plans to continue our trip of a lifetime in Antarctica. This, I decided, would be perfect.

March 19th was day 5 on our voyage to the Antarctic Peninsula aboard the MV Plancius expedition ship. We had already made it through the infamous Drake Passage to the South Shetland Islands – today, we would sail through the stunning Gerlache Strait to Cuverville Island and Neko Harbour, where we would be making our first and only landing on the actual continent. 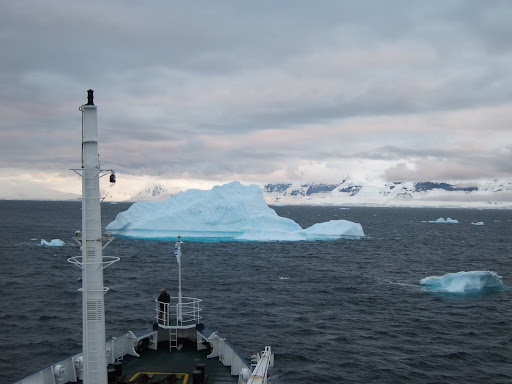 We awoke to a gorgeous sunrise over the white mountains surrounding the channel. Before breakfast was even announced, Humpback Whales were spotted near the bow of the ship. It was slightly cloudy, but otherwise a nice day. 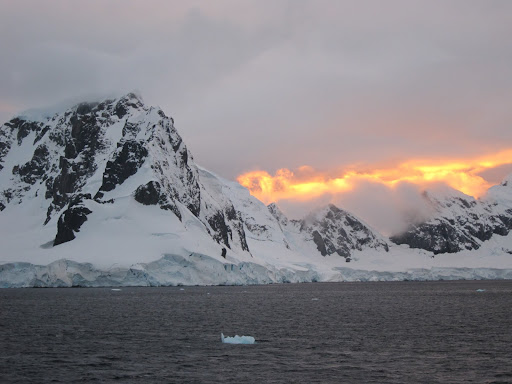 As we continued navigating the channel, more whales could be seen near the ship, along with the occasional seal hauled up on a floating iceberg and porpoising groups of penguins. 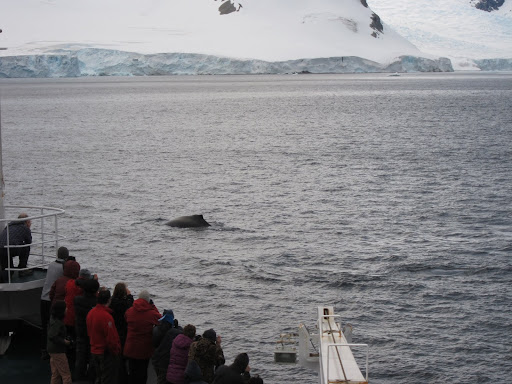 Not wanting to miss any of the amazing scenery, we spent a lot of time out on deck, popping in to the dining room late for breakfast. Many other passengers had the same idea.

After breakfast we dropped anchor near Cuverville Island and went to the mandatory briefing in the ship’s lounge. There were two activities planned around Cuverville that morning – a landing on the island itself to explore the large Gentoo Penguin colony, and a zodiac cruise through the icebergs with the chance of following whales. We decided to do the landing on the island first, and let the first group of passengers on the zodiac cruise scope out the best whale-watching areas. 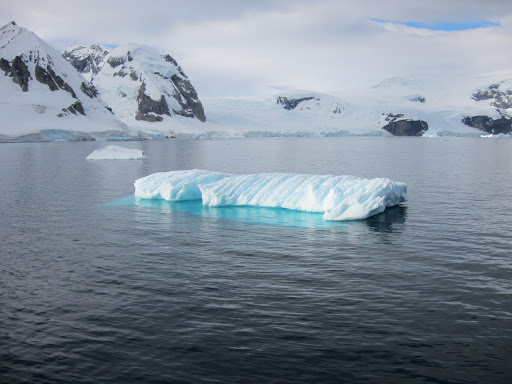 The zodiac pushed aside small bits of ice with a crunching sound as we landed on the island, swinging our legs around as we had been shown to disembark the small boat.

Immediately, we were surrounded by penguins! Unlike the Chinstrap colony we had seen the day before on Half Moon Island, these Gentoo Penguins were very active. 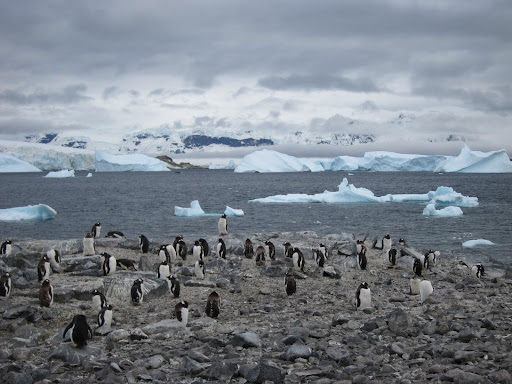 Many of them were walking around, to the water and back for a quick dip, and passing right next to us. We tried to keep the prescribed 5m (15 ft) distance between us and them, but many times it was impossible – in fact, we had to keep an eye out to make sure we didn’t accidentally step on one! 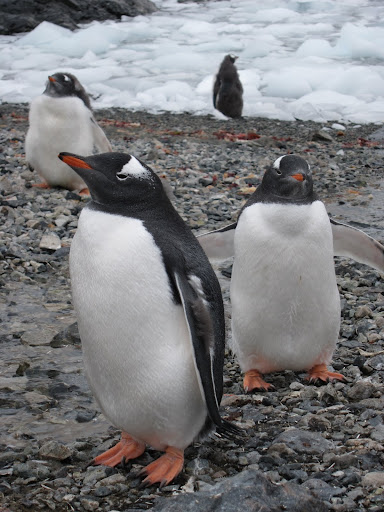 We walked closer to the beach, littered with whale bones to watch the little guys waddling around. Out in the distance around the bay we could see the zodiacs approaching a number of whales and started to wonder if we had made the wrong choice by landing on the island first.

Soon enough, though, it was our turn. We boarded a zodiac with guide Kelvin at the controls, and zipped off across the water chasing whales’ tails. 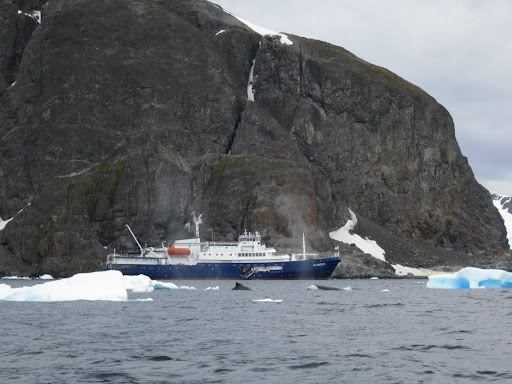 We followed a pair swimming around in the bay, catching many sights of them spouting water into the air, with the occasional “fluking” maneuver of arching up and diving down, with the tail high up out of the water. We learned that researchers use the unique markings on their tails in order to count and identify individual whales. 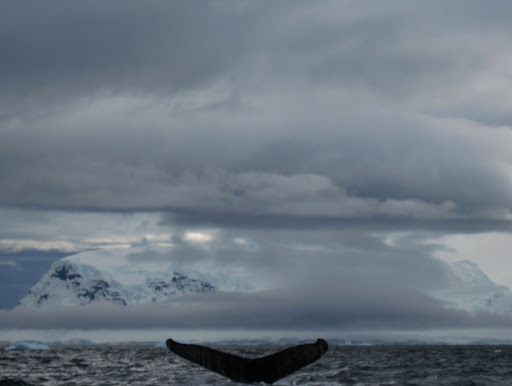 Kelvin also navigated through some interesting icebergs, pointing out some of the different shapes, and talking about how they form and are molded from the constantly changing conditions at sea. 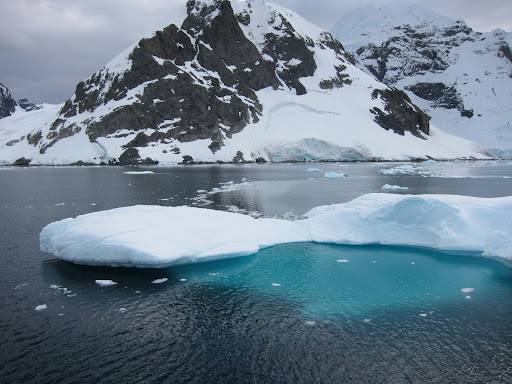 Back on the ship, we warmed up a bit and changed out of our many layers of clothes. The clouds that were present most of the morning were now lifting and the sun was now shining down brightly on the completely smooth water surface, which was acting like a mirror. 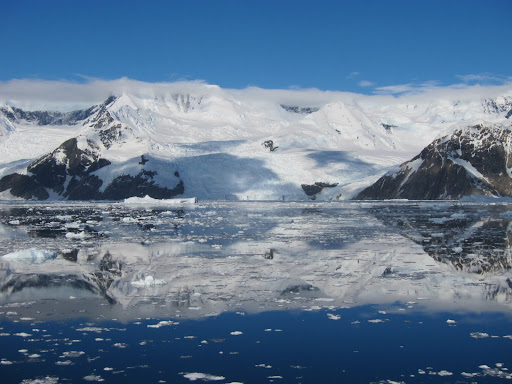 Over the next few hours, the ship traveled through the magnificently beautiful Errera Channel to our next landing spot for the afternoon. We stayed out on deck, taking lots of photos of the breathtaking scenery. 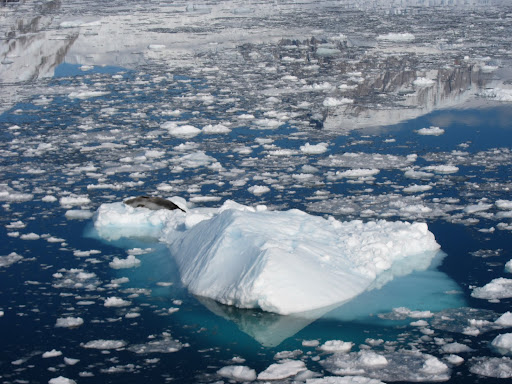 We gathered for the afternoon briefing, where we told we would be landing at Neko Harbour to set foot on the Antarctic mainland. The mood on the ship became quite jubilant, as many people looked forward to officially visiting their 7th continent (though only Heather’s 4th and my 5th).

At the landing site, we were greeted by more Gentoo Penguins. It’s not unusual to find penguins at every landing site, as they look for rocky areas that aren’t continually covered in snow in order to breed and make their nests. Coincidently, these are almost always the only suitable landing spots for human visitors as well. 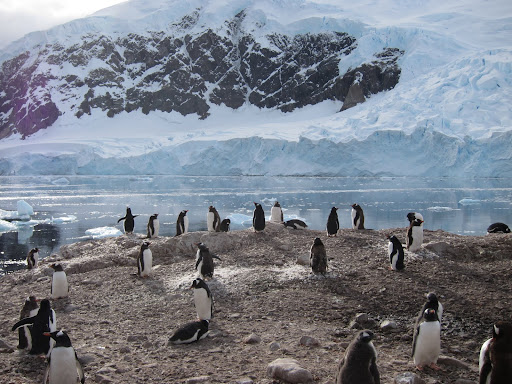 We followed Jim on a small hike up a snow-covered hill in order to get a brilliant view of the nearby glacier as well as a bird’s-eye view of the harbor. 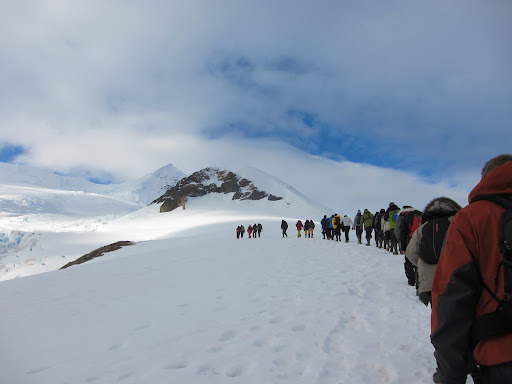 At the top, we caught our breathe and watched as a few large pieces calved off the glacier into the bay – unfortunately we weren’t fast enough on the camera to capture it! 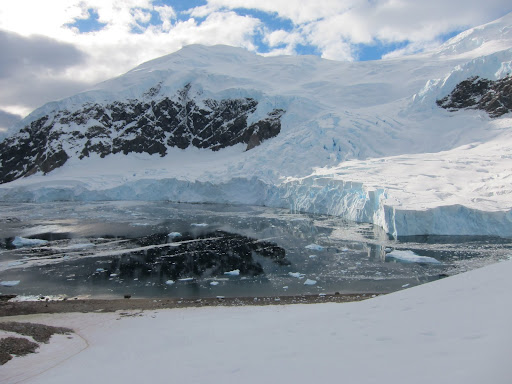 After most of the group had already headed back down the hill, Heather and I gradually made our way down. About half-way down, at another scenic viewpoint, I decided this would be the perfect spot. We were on our own, in one of the most beautiful and remote places on the planet. 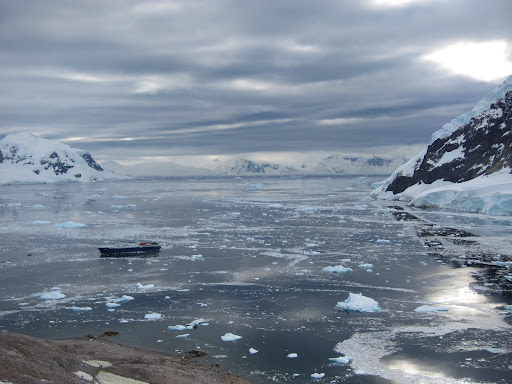 It had been my plan all along to capture the proposal on film. During our trip, we’ve made a number of videos using our small video camera. Amazingly, Heather suggested we do a video in this same spot, right where I was about to suggest the same! 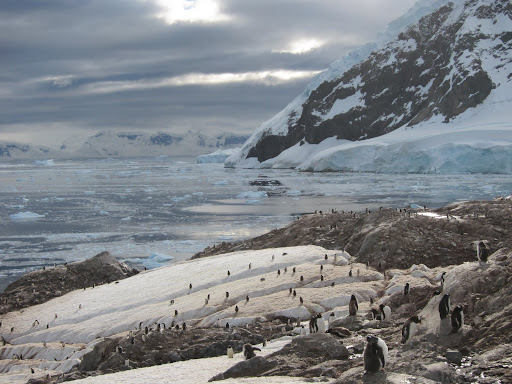 I insisted we do it together, and set up a tripod in the snow. Heather – who’s more of a natural in front of the camera – started narrating and I awkwardly interrupted her, dropping to one knee and asking if she would marry me. At first she looked at me shocked and said, “are you serious?” I assured her I was, and luckily, she said yes! 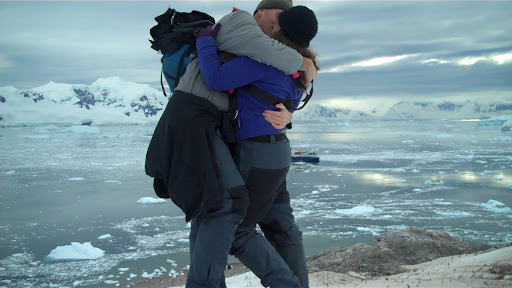 We enjoyed the rest of our time on the Antarctic mainland, chasing some penguins, sharing the news with friends from the ship, and enjoying this amazing place (and monumental event!) together. 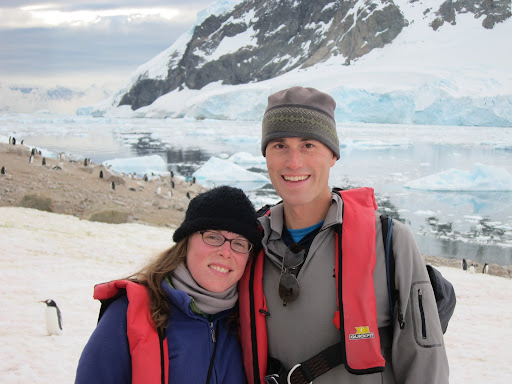 Once again, we joined Kelvin for a zodiac cruise through the harbor, checking out more interesting icebergs, Minke Whales, and lots of penguins and seals. 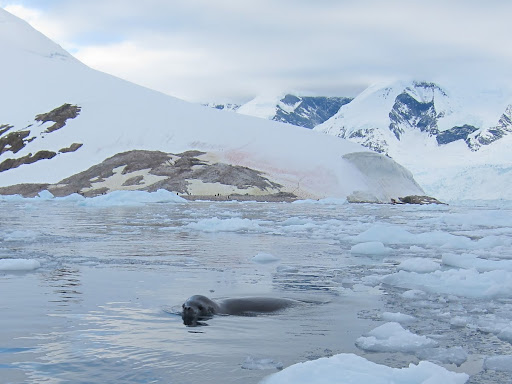 That night just happened to be the biggest party night of the entire voyage, as everyone gathered on the stern decks for lots of drinks and a delicious barbecue under the moonlight in Paradise Bay. Everyone was excited – us especially – about this unforgettable day at the bottom of the world.

12 thoughts on “An Antarctic Proposal – Cuverville Island and Neko Harbour”