After the incredibleness of the whales in Hervey Bay and visiting nearby Fraser Island, we hopped on the Greyhound bound for Noosa Heads. Noosa is known to be a surfer’s dream and is also a great base for visiting the late Steve Irwin’s famous Australia Zoo.

On our first night there, we took a walk through town and quickly realized it wasn’t exactly our backpacker scene. Fancy high-end boutique shops, gourmet food and wine stores and upscale restaurants line the trendy main street. Too pricy for our budget, we walked over to a backpacker hostel/bar for a cheap meal and a beer. The next night at sunset, we walked along the beach and saw a couple taking their wedding photos. 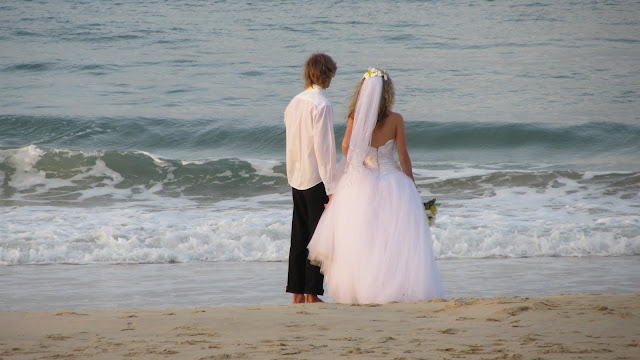 It is a beautiful spot, indeed. We took the advice of our guidebook and many other travellers and soaked in the stunning coastline views on a long walk along the cliffs of Noosa. Along the way, we stopped to have our picnic lunch while watching passing humpback whales on their way down South to Antarctica. We were so lucky to be travelling south with them and got many chances to see them on our journey towards Sydney. Even from far away, it is a spectacular sight to see these huge creatures hurl themselves out of the water for a full breach. Breathtaking. 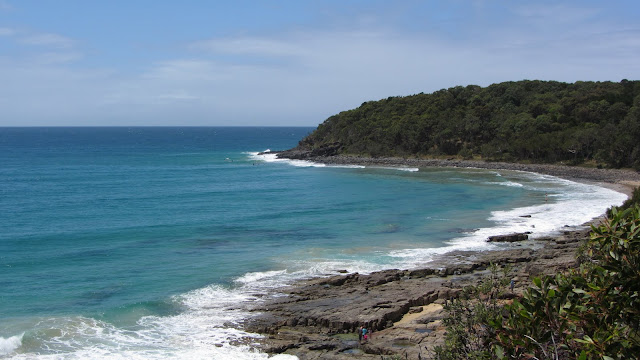 The next day, we jumped on a huge crocodile bus for the hour-long journey to the famous Australia Zoo. Started by his father Bob back in 1970, Steve Irwin’s Animal Planet success helped fund the zoo to what it is today. 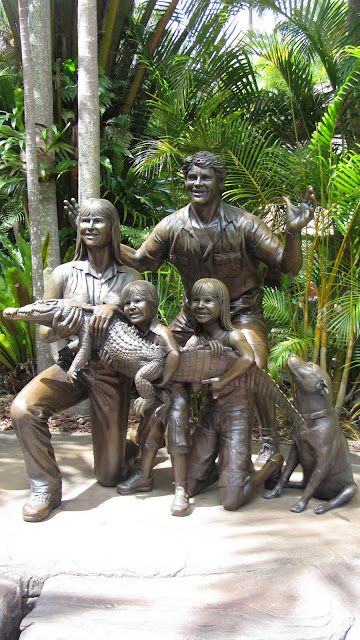 We went there with the expectations that it would be an incredible zoo. The first animals we saw were the old tortoises. They are so interesting to watch and the hissing sound they make is quite startling. Next, we stood in line to feed the elephants. Three lines full of tourists just waiting for their moment to feed these gorgeous guys some fruit. They were adorable, but the whole zoo idea really started to get to us. These animals aren’t even native to Australia. What bills itself as so eco and animal friendly really started to rub us the wrong way, especially as we saw signs for the newly opened African Safari exhibition on the other side of the park. We swiftly decided to skip that. 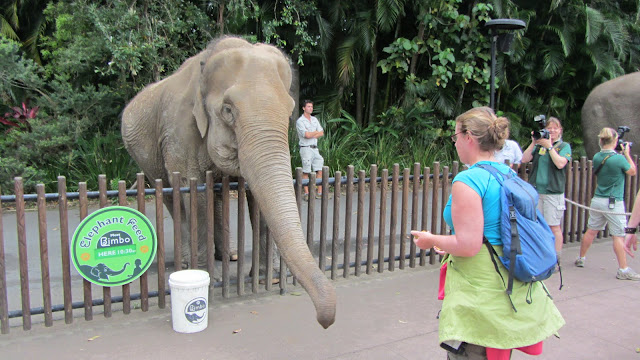 The highlight of this “park”-like zoo is, undoubtedly, the crocs. This park has about 50 or so crocodiles. We were so sad that Steve Irwin has left this earth because it would have been fantastic to see him interact with his crocs in real life. 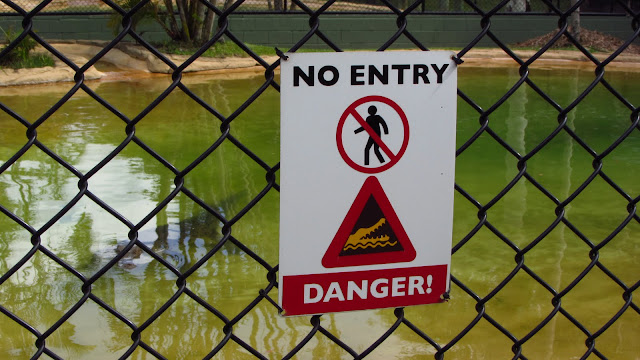 The big show was about to begin… We got our seats just out of the hot sun and settled in for a great spectacle while we ate the picnic lunch we had packed (SO much cheaper than eating at the park – we had to cut corners in Oz whenever we could). 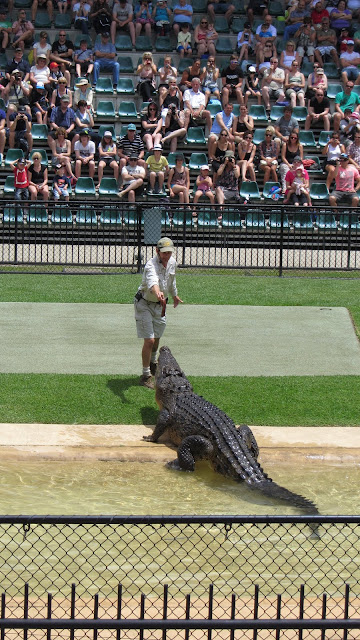 The show starting with the parrots and big birds flying in, then elephants and snakes. Let’s face it – everyone is there to see the crocs. The handler who was feeding and working with the crocodile seemed very cautious and afraid of it (video on YouTube). He fed the crocodile and it swam in and out of the water, but it left us deflated knowing it would have been a whole different show altogether had Steve Irwin still been alive.

The park is nicely set up, however a little confusing to get around. There was a large sampling of animals from around the world, but our newfound respect for wild animals had us wincing that we had paid the $50 each to go, seeing as many of the animals aren’t even native to Australia. The other sad aspect is that the entire park seems like one huge memorial to Steve Irwin. I understand the desire to remember him and all of his good work with animals, but the place is a bit depressing with photos of him around each corner and an entire room of artifacts and letters from soon after his death are presented in a museum-like glass cases. Don’t get me wrong, I loved Steve Irwin; it just seems they are going a bit overboard here. 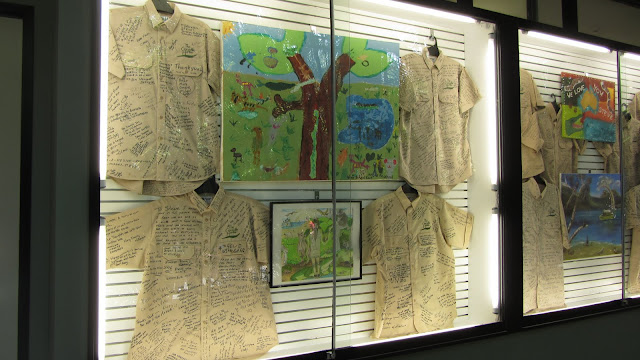 We did have a blast sitting down with the friendly resident kangaroos. So gentle and chilled out, it’s easy to spend an hour or more with them. After all, they’re one of Australia’s animal icons, and for good reason. 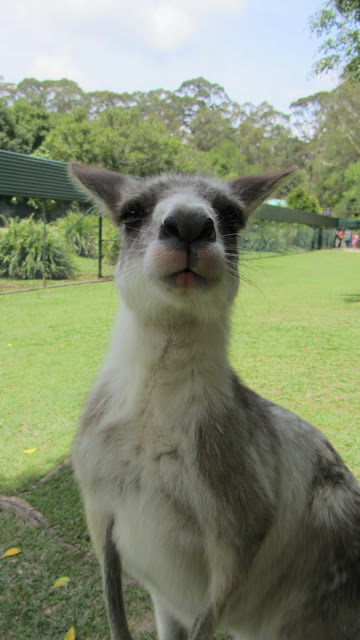 I seem to have developed quite a soft spot for these guys. After holding my little friend Jack on our West Coast adventure, I loved soaking up some more kangaroo time. One little guy even wanted to hold my hand… 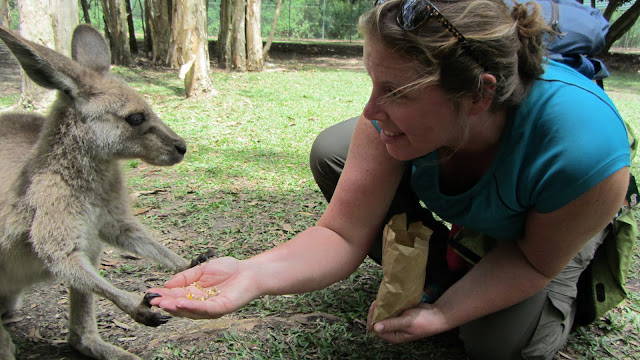 Before we boarded the bus heading back to Noosa, we had a bit of time to check out the animal hospital. They take in any type of native animal who is hit by a car, abandoned, sick or injured. 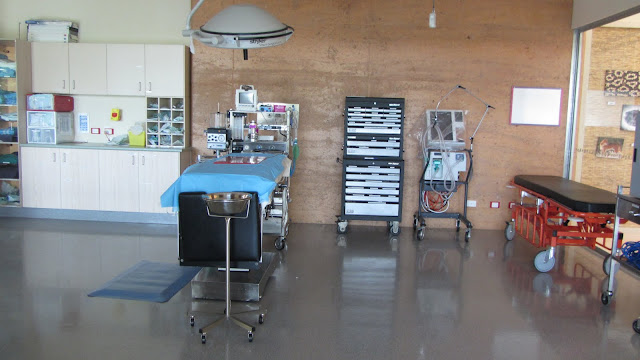 The saddest case was Fleet, a sweet koala who had for some insane reason, been shot 7 times. He was brought in clinging to life and months later was still fighting. It was heartbreaking to see him all curled up in a tree all bandaged up. We later heard in the news, soon after, the koala succumbed to his injuries and had passed away. 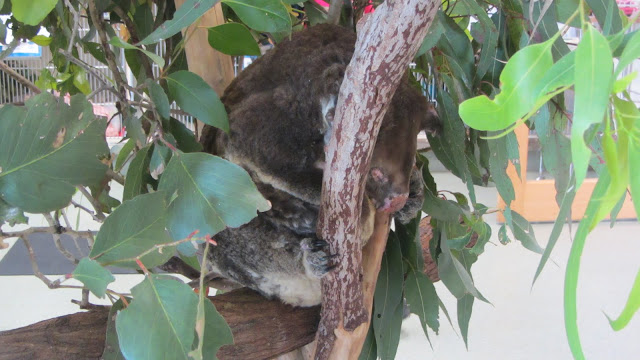 The beautiful Noosa coast was a sight to see and the Australia Zoo an interesting must-do, but it was time to hop back on the Greyhound… next stop Queensland’s capital city – Brisbane.