It would have been a shame to come all the way to Vietnam just to skip Halong Bay, a collection of majestic limestone rock formations jutting out of the ocean along the North Vietnamese coastline in the Gulf of Tonkin. While we were familiar with similar scenery in places like Railay and Khao Sok National Park in Thailand, we were assured Halong Bay was truly spectacular, unique, and worth the hefty expense.

The best way to see the nearly 2,000 islands that make up the archipelago is by boat, with most people opting for a 2 day/1 night package cruise. With hundreds of options, ranging from cheap and cheerful backpacker barges to 5-star luxury yachts, it can be a lot of work figuring out which boat to book. We pored over Tripadvisor reviews before settling on the mid-level Alova Gold Cruises, shelling out around USD $230 for the two of us. 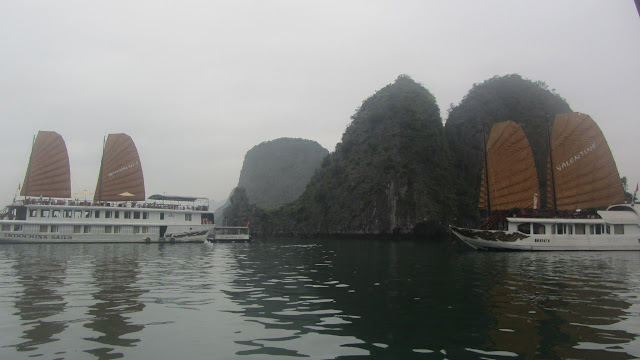 We were picked up in the morning from our hotel in Hanoi’s Old Quarter for the four hour ride to Halong City and the pier. Unfortunately, the weather was overcast, as it had been for our five previous days in Hanoi. By the time we made it to the pier, the weather hadn’t improved, but with no other option than to make the most of it, we hopped into a small skiff and were shuttled to the Alova Gold boat waiting in the harbor.

Our gregarious guide, Tom, kept the activities rolling fast and furious, with barely a minute available to even snap a photo or two. After lunch on the boat, we were shown to our cabin, which was nicely outfitted, but close to the engine room which was emitting unpleasant fumes and loud rumbles.

While the towering limestone rock islands making up Halong Bay are striking, the area is being destroyed by the tourists which come here to appreciate its natural beauty. The waters of Halong Bay are disgusting, due to pollution let out by the tourist boats. We saw toothbrushes, dead fish and even human feces on our kayaking outing. Many in our group wanted to go swimming, but after looking at the water, we were all horrified and hoped we didn’t fall into the filthy sea. 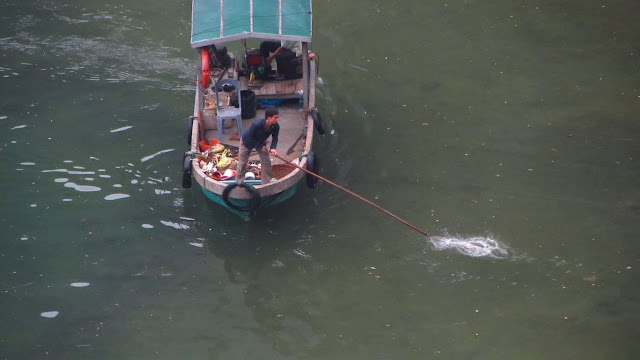 Each of the islands we were taken to was completely overrun with other tourists. Instead of being able to peacefully reflect on the beauty of the surroundings, we were often stuck rubbing elbows with loud groups of camera-crazy groups and getting hassled to buy souvenirs from enterprising locals. 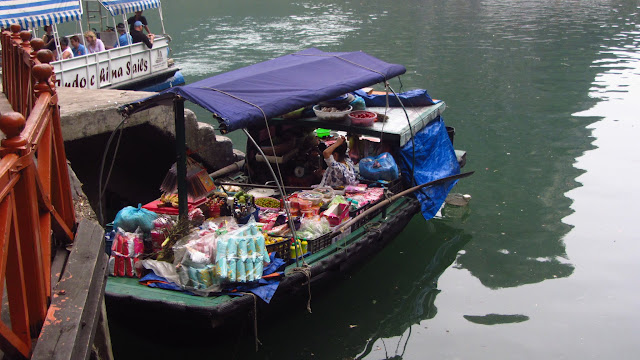 While still super-touristy, one of the nicer parts of the trip was our stop at Hung Sung Sot Cave. Erosion and wave action have carved a number of caves, caverns, and arches in Ha Long Bay, and have been also been busy shaping the islands and their coastlines over millions of years. 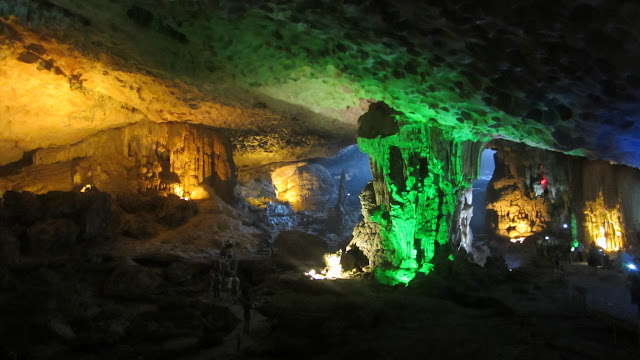 A little less than 24 hours after stepping on the boat, it was time once again to leave for Hanoi. We had booked a train to Hue that would be leaving that evening, and were disappointed to find out that Alova Gold would not drop us off at the train station. Instead, we had to brave the manic Hanoi streets with all our gear. Luckily, we made it there without incident and prepared for our overnight train journey…