While we didn’t see a single other tourist during our time in Mandalay, we did finally meet a nice couple as we left the city on a bus to Inle Lake. This large, shallow lake in Burma’s Shan State is one of the country’s top tourist attractions, famous for its striking natural beauty and traditional culture.

The bus left us on the side of the highway at 4am, about 10km from the main town near the lakeshore, Nyaungshwe. Luckily, we were able to split a cab for the ride in, and agreed to meet up with our new friends later in the day. Exhausted from the long bus ride, we hit the sack and slept in late. 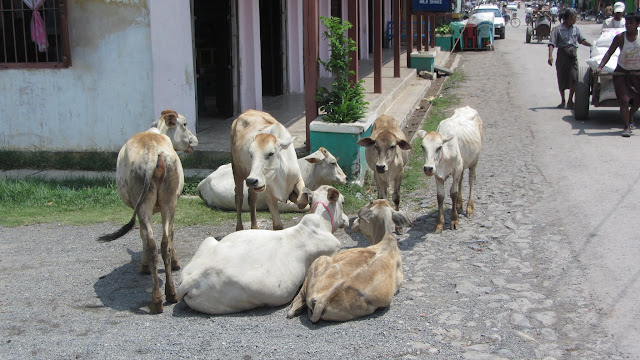 Nyaungshwe is a small and touristy town. There really isn’t that much to see or do in the town, but we didn’t mind taking a couple days to chill out and explore the area. 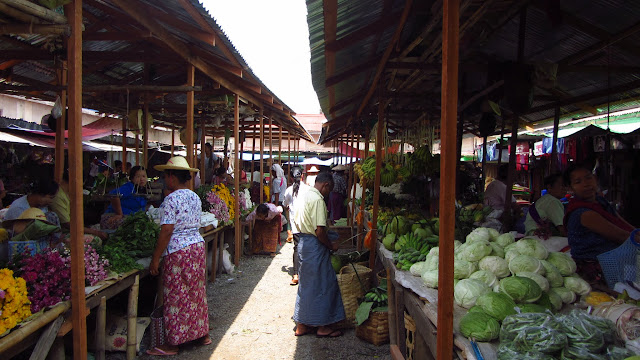 We rented bikes and cycled out to Red Mountain Estate Vineyards – the only winery in Myanmar. Having had disappointing experiences with other wines in Southeast Asia, I have to say our expectations were pretty low. The winery has a small restaurant with a fantastic view over the lake. We sampled the Sauvignon Blanc and were pleasantly surprised – it was actually pretty decent! 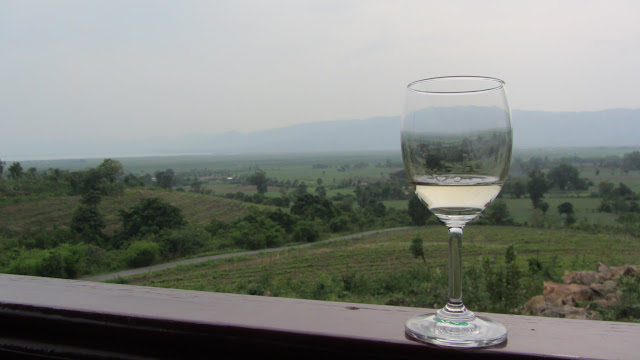 Back in town, we headed to the Traditional Puppet Show one evening. This show is put on by the third-generation puppeteer, Aung, in his small theater. Using some basic lights along with a hissing cassette tape soundtrack, Aung masterfully moves his handmade puppets, making them jump and dance to the audience’s delight. 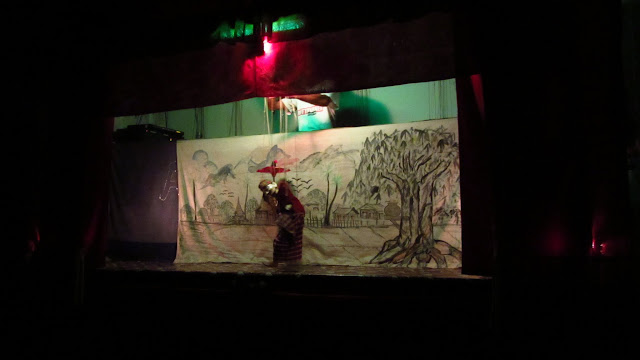 Finally, we joined our friends from the bus for a boat tour of Inle Lake. This large, shallow lake is home to communities of fishermen that live on stilted houses right over the lake. 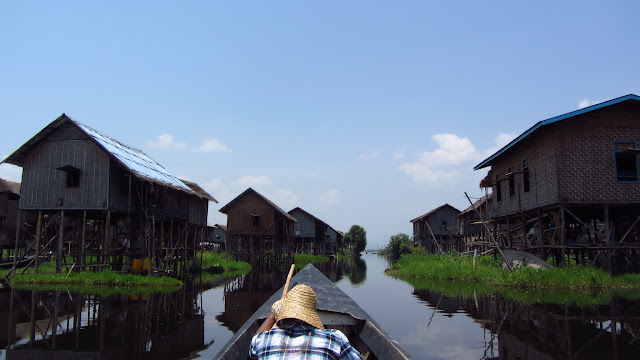 The boatsmen are famous for their unique rowing technique, where they wrap the oar around their leg and row the boat from its bow. This allows them to get better visibility for navigating the shallower sections filled with reeds. 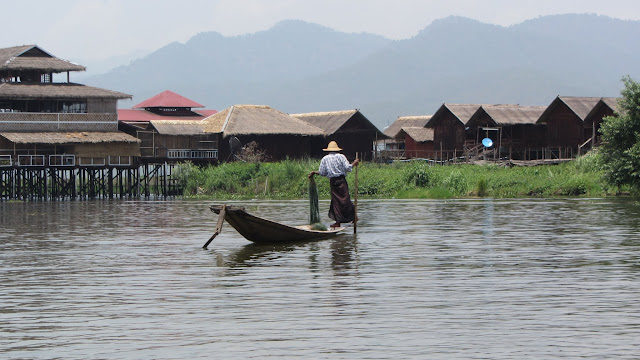 We made a few stops during our day out on the water. At one place we saw women weaving traditional bags and outfits. They are particularly famous for their Shan bags – messenger-type bags worn over the shoulder by both men and women throughout Burma. 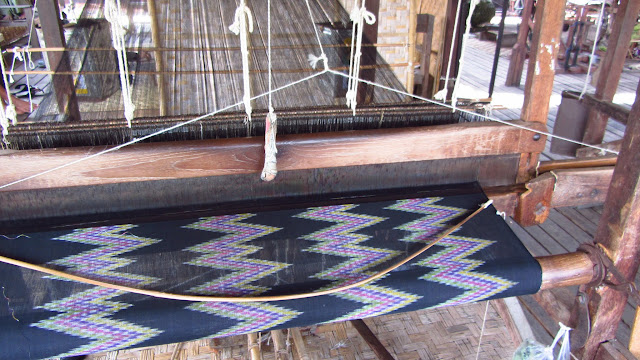 Later on, we stopped at the cheroot cigar factory, where a bunch of women were hard at work hand rolling (and smoking) these small cigars which are flavored with honey and tamarind. 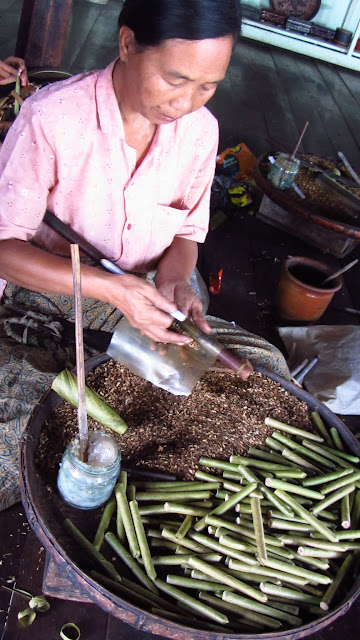 Inle Lake is home to a huge series of floating gardens, which are used to grow fruits, vegetables, and flowers. We navigated through a massive maze of tomato plants right in the middle of the lake, a surreal experience. 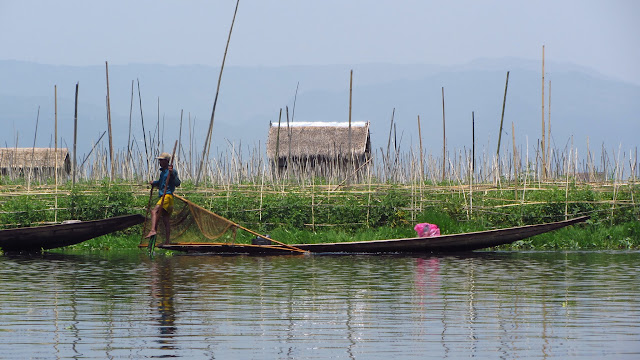 It might seem strange to grow plants on a lake, but there are some huge benefits. For one, they are resistant to the severe flooding found elsewhere in the country. The floating beds of fruit and veg simply rise or fall with the water level of the lake. In addition, the lake water is packed with nutrients. Unfortunately, fertilizers and pesticides used to cultivate these gardens are quickly polluting the lake. Combined with oil leaking out of the increasing number of boats criss-crossing the lake for tourists and the trash dumped by communities living on stilted houses, Inle Lake is in peril. Already, fishermen have noticed a significant drop in fish stocks. 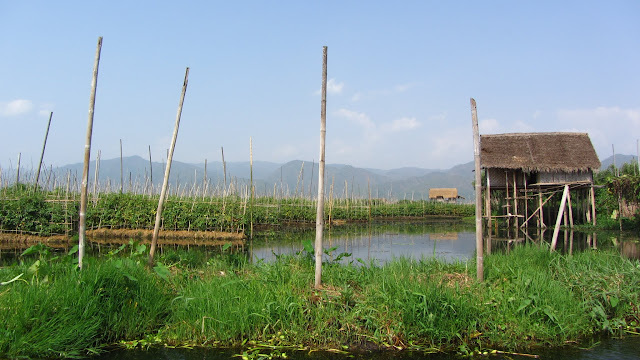 In the middle of one of these large floating garden sits a beautiful teak monastery, famous for its jumping cats. The monks here have trained their resident herd of cats to leap high into the air, jumping through hoops. We hoped to see this, but unfortunately the head monk had recently passed away and everybody was in mourning – including the cats. Instead, we saw a bunch of lethargic cats, lazing around and looking much like…well, cats. 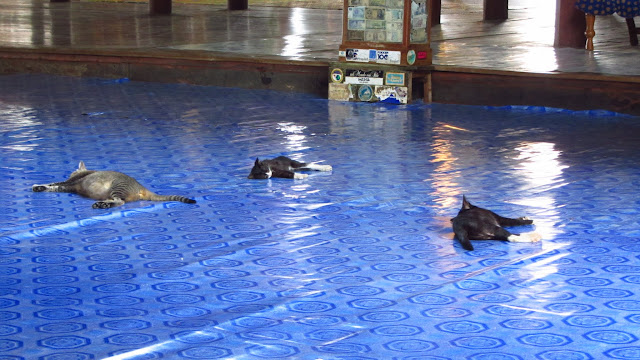 I spoke to a young monk that seemed a little annoyed by all the cats sharing their stilted island here in the middle of the lake. “They pee everywhere and smell bad”, he told me. 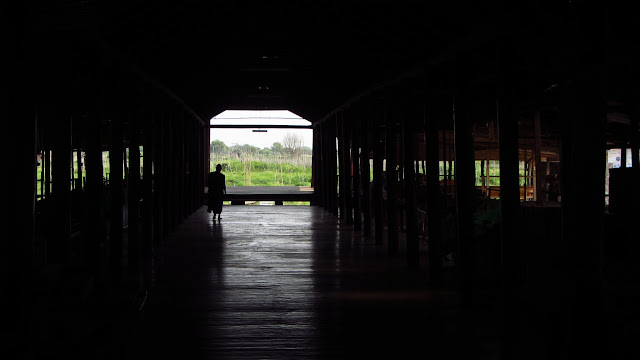 We were taken to a deeper part of the lake and told we could swim. Knowing about the terrible pollution problem, we decided to give it a miss, opting to dangle our feet in and watch the sunset. 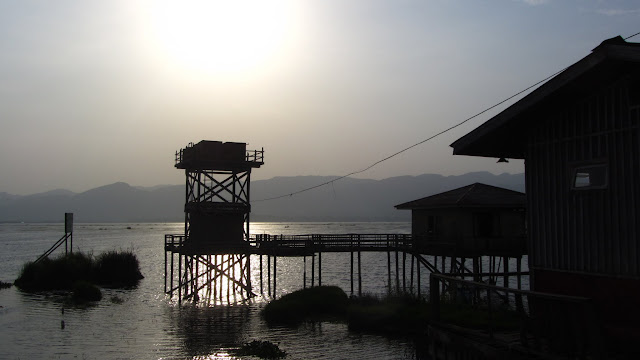 Our time in Burma was drawing to a close and we were soon ready to head back to Yangon.

3 thoughts on “A Boat Tour of Inle Lake – Nyaungshwe, Burma”